Today, Ayurveda, the traditional system of Indian medicine is becoming the hottest fad around the world. From Turmeric latte which is Haldi with milk, to Moringa, or drumstick leaves, that is dubbed the worlds new wonder drug, everyone is discovering herbal remedies which have been passed through generations for centuries, in India. Scholars had noted the strides made in ancient India, centuries back. Noted 19th-century British Historian James Grant Duff famous for his work ‘History of the Marathas’ observed –

‘Many of the advances in the sciences that we consider today to have been made in Europe were in fact made in India, centuries ago.’

However, these Ayurvedic herbal remedies are just the tip of the proverbial iceberg. The field of medicine was so advanced in India, that ancient Indian medical practitioners composed texts on advanced surgery and the human physiology 2000 years ago!  The most prominent of text which has survived is the Sushruta Samahita or ‘Sushruta’s compendium’, believed to have been composed by a Rishi Sushruta.

In ancient India, Ayurveda and medical science were divided into two major traditions, the Atreya School based in Takshashila near Peshawar and the Dhanvantri School based in Benaras. The Atreya school gave more prominence to the practice of medicine and their primary text was the Charaka Samahita while the Dhanvantri school gave greater prominence to surgery and referred to the Sushruta Samhita.

There was a reason why surgery was so important in ancient India.  Frequent warfare meant that combatants, as well as civilians, saw horrific injuries which had to be treated. Corporal punishments like cutting off the nose or limbs were quite prevalent and with large tracts of thick forests, injuries caused by animal attacks were common. This led to the development of surgery as a specialist field. The author of the Sushruta Samhita,  Rishi Sushruta was a medical practitioner and teacher who is believed to have lived around 5th – 6th centuries BCE in Kashi (Banaras).  Though exact dates of when the work was composed or when this sage lived are difficult to pin down, there are many references to the  Sushruta Samhita, and him as its author, in other literary sources.

However, there is no doubt that like other texts, this too evolved over time. The present form of Sushruta Samhita is believed to have been the work of several people. K. Ramachandra Rao, a Sanskrit scholar, in his Encyclopedia of Indian Medicine (1985), suggested that the author of the original text was ‘elder Sushruta’ or ‘Vruddha Sushruta‘. The text, states Rao, was redacted centuries later ‘by another Sushruta, then by Nagarjuna, and thereafter chapters were added as a supplement.  The original text is believed to have 5 books and 120 chapters, which over time grew into 6 books and 186 chapters. The text in its current form contains details of around 1120 medical conditions, 700 medicinal plants, 400 surgeries and 121 surgical instruments!

An illustration of Sushruta performing surgery  | Wikimedia Commons
Support Live History India
If you like Live History India`s work, do consider extending support to us. No contribution is too small and it will only take a minute. We thank you for pitching in.
Donate
*Terms and Conditions

In the text, Rishi Sushruta stresses that

‘Theory without practice is like a one-winged bird that is incapable of flight.’

He was one of the earliest known medical teachers in the world to advocate that the dissection and study of dead bodies was a must for any successful student of surgery. The students of Sushruta began by practicing incisions and excisions on vegetables and fruits and also leather bags filled with mud or liquids of different densities. This was then followed by practice on corpses of animals and then human beings.

This was tricky as the orthodox Hindu tenets according to the Dharma Shastras considered the human body sacred, so much so that it was stated that it must not be violated by the knife and must be cremated in its original condition. Sushruta and his students subverted this by using a brush-type broom, which scraped off skin and flesh without the dissector having to actually touch the corpse. This enabled them to bypass orthodox restrictions and study the human organs.

At a time of non-existent biochemical or imaging equipment, Sushruta and his students carried out complicated surgeries like cataract extraction and removal of urinary stones (ashmari). During the procedure, they advocated medicated wine for anaesthesia and laid stress on sterilising the operation room by fumigating it with fumes of mustard, butter and salt.

One of the most interesting aspects of the text is the sheer detailing of rhinoplasty as a technique.  Cutting off the nose was a common punishment in ancient India and the text mentions more than 15 methods to repair it.  These include using a flap of skin from the cheek or the forehead, which is akin to the most modern technique today. There are also references in Sushruta Samahita to the technique of moulding false legs with iron, now common as the prosthesis.

The treatise also has useful treatment techniques to what we think are very modern day ‘lifestyle’ diseases like ‘Madhumeha’ or diabetes and ‘Hridroga’ or disease of the heart.  These ancient surgeons had the knowledge of a structure in the chest and its role in the circulation of vital fluids through the channels. Sushruta Samhita contains classifications of bones, dislocation of joints, fractures, and their treatment. The text also has commentary on paediatrics and midwifery.

Dr Frank McDowell, Editor of the Journal  Plastic and Reconstructive Surgery in his ‘The Source Book of Plastic Surgery,’ described Sushruta and his work thus –

Like other great Sanskrit texts, the Sushruta Samahita also traveled from India to other parts of the world.  During the early 8th century, the text was translated into Arabic as ‘Kitab Shah Shun al-Hindi’, by an Indian medical practitioner named Mankah on orders of Yahya Barmakid, a powerful minister of Caliph Harun-al-Rashid of Baghdad.

There are also historical references to this in the court of king Yasovarman I (889 CE-900 CE) of Cambodia as well as in the monasteries of Tibet. The first European translation of Sushruta Samhita was published by Hessler in Latin in the early 19th century. The first complete English translation was done by Kaviraj Kunja Lal Bhishagratna in three volumes in 1907 in Calcutta.

The Sushruta Samhita is a gem in more ways than one. Not only is it a great scientific treatise that has stood the test if time, it is also an iteration of the great strides made in the field of science in Ancient India.

It is a pity that amidst all the chest thumping rhetoric that one comes across around India’s ‘glorious’ past, there is little effort made to really study and delve deep into the centuries-old works on medicine from India. The Sushruta Samhita, Ayurveda and Patanjali’s Yogasutras deserve far more serious multidisciplinary study that is being done today. Who know’s what great treasures and cures trained scientists will find there.

The English translation of Sushruta Samahita can be read here: https://archive.org/details/englishtranslati00susruoft 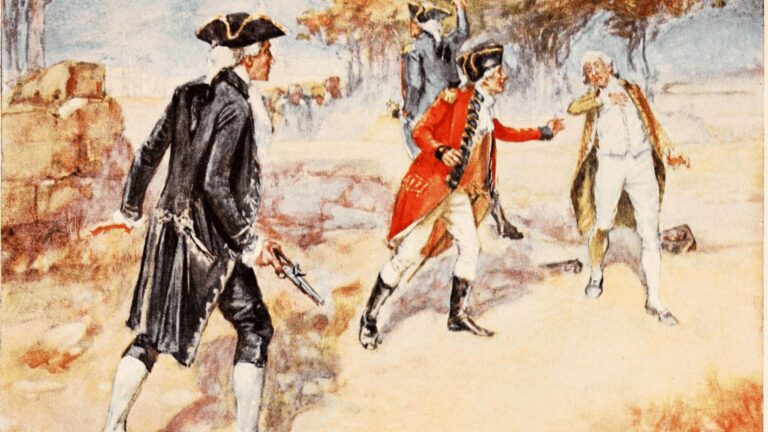 They were political rivals who hated each other’s guts and – hold your breath – chose to duel to settle a score. Brace yourself as we unmask the duellers who battled it out on a Calcutta street exactly 240 years ago