The image of the priest-king of Mohenjo-Daro with a shawl wrapped around him is as iconic as the dancing girl also found there. But look closely at the priest-king’s bust and you will see that the circular designs and trefoils, originally sporting a red pigment on a blue or green background on the shawl, is uncannily similar to the double-sided block printing or Ajrakh (or Ajrak) work practised in Sindh and Kutch even today. The strong similarities have led some historians to believe that Ajrakh, maybe one of the oldest continuous forms of printing indigenous to the sub-continent of India – tracing its origins back to more than 4000 years ago.

The oldest known piece of block printed Ajrakh cloth from Gujarat is believed to be around 600 - 800 yrs old from a grave in Cairo, Egypt. Now on display at the ‘India & the World’ exhibition at CSMVS  Museum in Mumbai | LHI Team

Practised by the local communities in the vast deserts of Kutch in Gujarat and Sindh in Pakistan, the double-sided block printed textile is still made in a traditional way with natural dyes. And it still sports the classic colours of blue and red with geometric patterns.

There are different views on where the name Ajrakh, itself comes from. Some records claim that it could have been derived from the Arabic term Azrak meaning blue – after primary colours in Ajrakh printing. The other theory suggests that the term would be derived from a more colloquial term aj-rakh meaning ‘keep it today’.

Irrespective of where the name originated from, what one can’t deny is that the Ajrakh is perhaps one of the earliest types of block-printed textile in the world and it is indigenous to the land around the River Indus. Historic records date it back to the Harappan Civilization, which was known for its cotton and use of indigo. Though excavations at various Harappan sites have not yielded direct evidence of cloth, there is a lot of indirect evidence in the form of images, statues and seals bearing a representation of clothing. The bust of Mohenjo-Daro’s priest-king wrapped in a shawl with circular designs and trefoils is a good example.

Portrait of Khatri Nobel wearing Ajrakh fabric in the 18th century | Wikimedia Commons
Support Live History India
If you like Live History India`s work, do consider extending support to us. No contribution is too small and it will only take a minute. We thank you for pitching in.
Donate
*Terms and Conditions

Ajrakh, as a form of textile printing, was originally practised in the Sindh region in present-day Pakistan. Around 400 years ago, the Khatri community that worked on these textiles moved to Dhamadka, 50 km east of Bhuj, in Kutch. Early converts to Islam (in the 12th century CE) they are known as the Khoja Sheikhs and are still famous for their Ajrakh work. Though very little is known about the antecedents of this community what we do know is that Khatris have practised this trade for hundreds of years.

Sadly, the village of Dhamadka was destroyed in the 2001 Gujarat earthquake. At that time, a new village by the name of Ajrakhpur was established 43 km away from the original site of Dhamadka to re-establish the community of artisans and their craft- Ajrakh.

Currently, Ajrakh is practised in Sindh in Pakistan, Ajrakhpur and Khavda in Kutch, Gujarat and also Barmer in Rajasthan. Each of these places has their own variation of Ajrakh and based on their style, colour and motifs used, the communities can recognize which region they belong to. The Ajrakh fabric itself can be easily spotted across the Kutch landscape, especially among the men belonging to the Maldhari community, the cattle herders of Kutch.

The ancient technique of preparing the Ajrakh is unlikely to have changed much over the millennia. It is complicated and involves as many as 14 steps. The process starts with washing the cloth multiple times to soften the fabric and remove all impurities from it. After washing, the fabric is treated with harda – a natural vegetable dye which gives the cloth a yellow colour and works as a mordant, helping to fix the dyes. The printing and washing stage is repeated multiple times with various natural dyes and mordants such as harda, lime, alizarin (an organic compound used prominently for red dye), indigo and even camel dung.

The technique of resist painting is used to create varied patterns and designs with different colours. Resist painting allows only the desired portion of the cloth to be dyed while the rest remains uncoloured. Intricate printing blocks are used to create a web of repetitive design patterns which gives a long pattern. Multiple blocks are used to create different designs and placements on the cloth giving a feel of central design and borders. Water, both in quantity and quality plays an important role in the entire process as it can influence the shade of the colour and have an impact on the entire process. The blocks used for Ajrakh printing have complex geometric designs and floral motifs.

There were few traditional blocks that remain today, a lot of the design has changed and it now incorporates new contemporary designs. These contemporary designs fill the urban market and brands like Fabindia, Biba and even couture designers are trying to revive the Ajrakh in a big way.

With the growing popularity of Ajrakh as a craft and traditional art form, the design finds its way to various international museums like Whitworth Art Gallery in Manchester and an Ajrakh inspired fabric in the Victoria and Albert Museum in London. Not forgotten, or vanishing, the efforts to revive the Ajrakh are truly laudable in a country where we are on the brink of losing so much else. This 4000-year-old tradition may set the benchmark for a wider revival of India’s rich traditions. 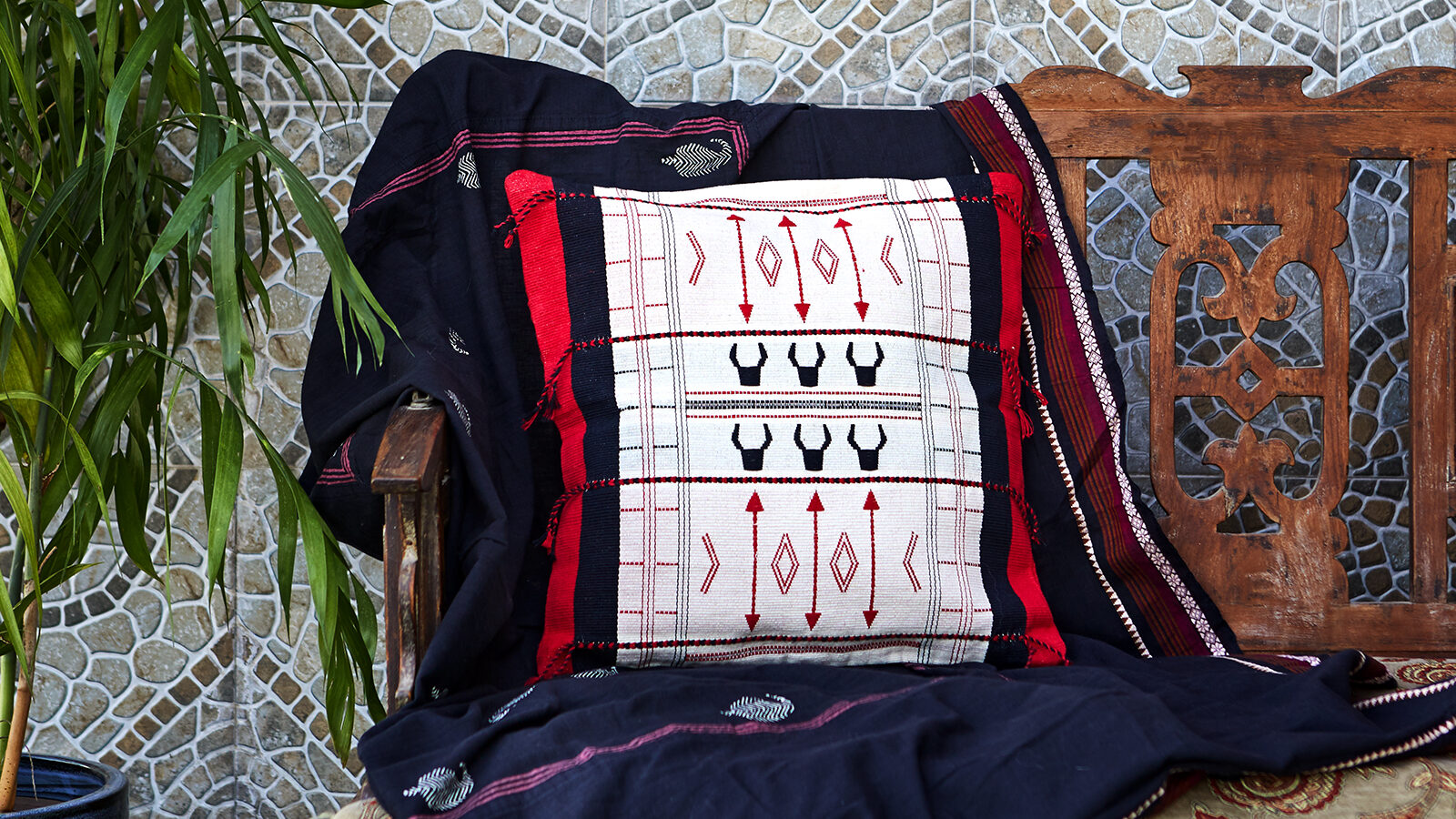 While the Mughal paintings are quite well known, from the Deccan emerged a school of spectacular miniatures displaying a blend of Indian, Persian and Chinese influences. Catch the story of the Bijapur miniatures-

Celebrate the dazzling embroidery and mirror work of the Lambanis of Sandur in Karnataka, a tribal community whose joie de vivre is stamped into every vibrant hand-crafted piece they make