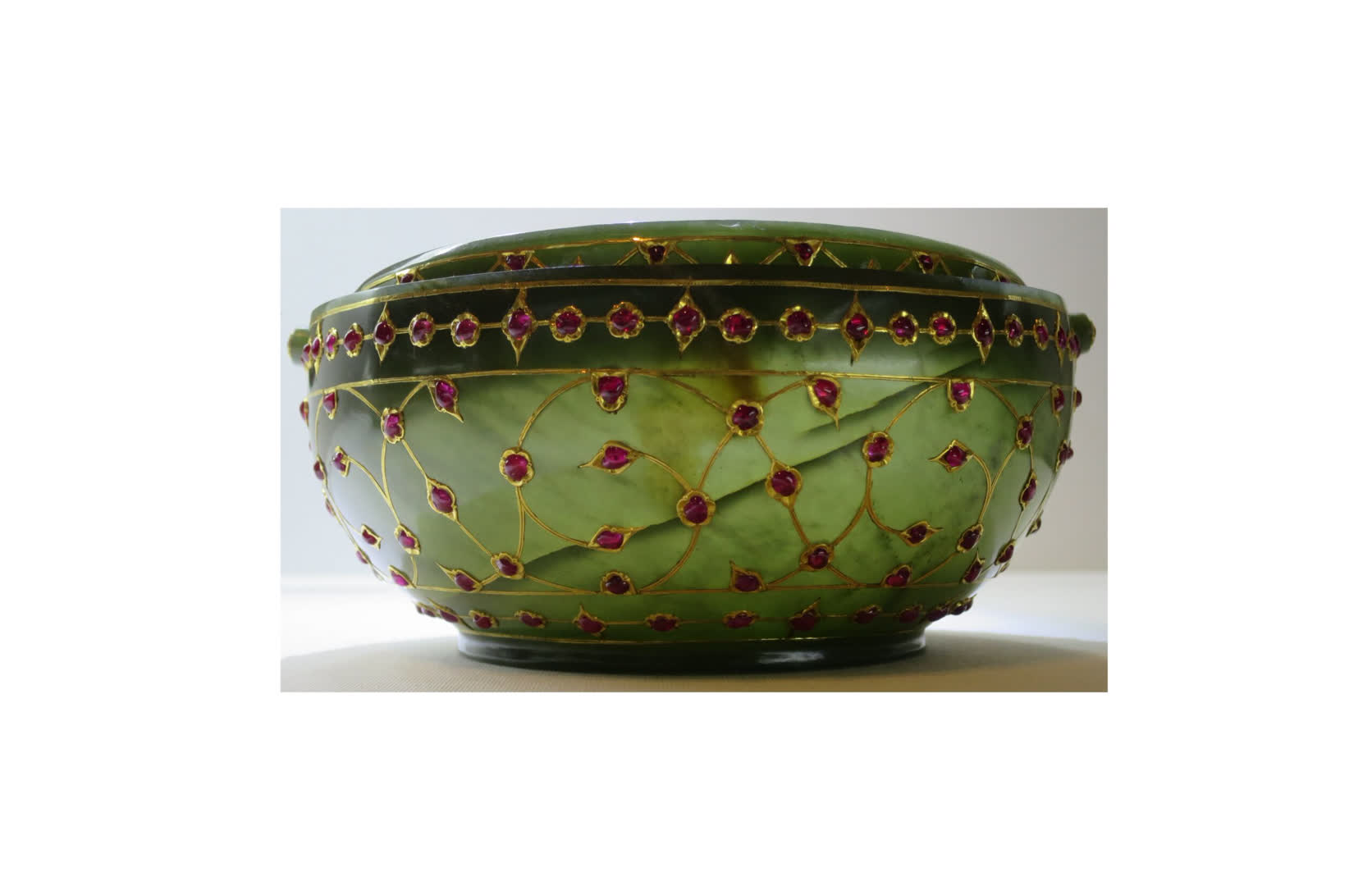 People usually associate exquisitely carved jade objects with China. In fact, the first image that comes to mind is probably that of a carved jade dragon. But few realize that India too has a very rich tradition of carved jade, thanks mainly to the Mughals.

The Timurids of Central Asia were one of the greatest patrons of jade, and for the Mughals, who descended from Timur himself, this beautiful green stone became a way of reclaiming their Central Asian legacy.

Interestingly, jade isn’t actually a single mineral but is actually two different ones – jadeite and nephrite – and, historically, most of it was found in Central Asia, from where it was taken to China and elsewhere. Jade deposits have also been found in Myanmar and the Americas. 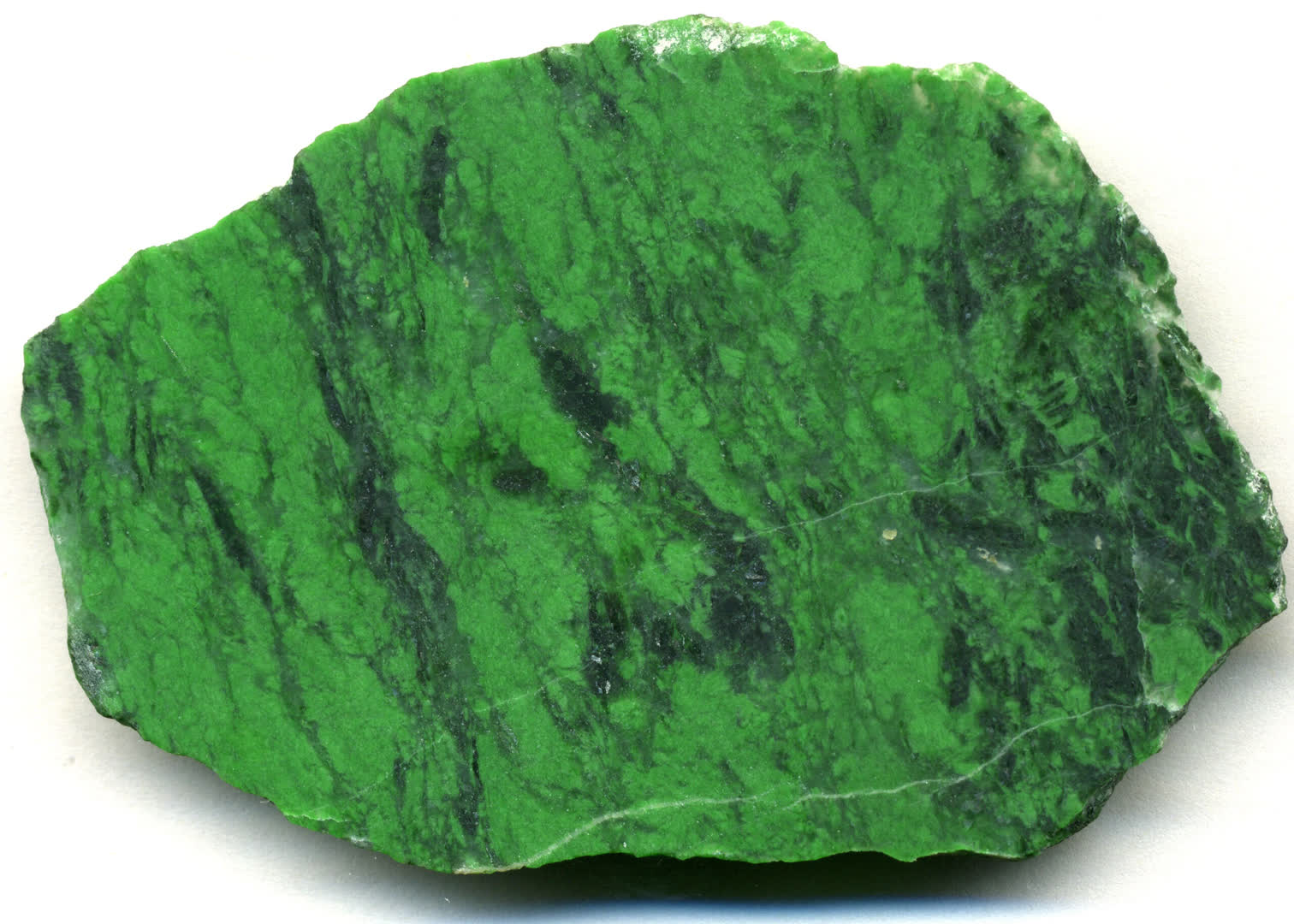 The history of jade in India can be traced to Harappan times, with jadeite beads found at sites such as Mohenjo-daro and Harappa.

The earliest literary reference to jade in India goes back to the 7th century CE, to Chinese traveller Hsuan Tsang’s description of an 8-foot-high statue of Buddha in blue jade at Samatata in Bengal. 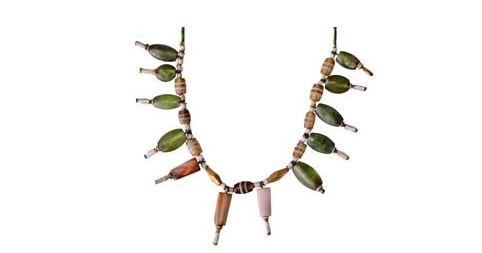 Another reference comes from the Southern Indian state of Telangana, from the Kolanapaka (Kulpakji) Jain temple, around 70 km from Hyderabad. The temple, believed to be 1,000 years old, has idols of three Jain Tirthankaras – Lord Adinath in the centre, flanked by Lord Neminath and Lord Mahavir. The sculpture of Lord Mahavir is more than 4 feet high and made of jade. It is said to date back to the founding of the temple in the 11th century CE.

We also find a few surviving jade objects dating back to the Delhi Sultanate period. One of the oldest jade objects associated with Islamic culture in India is a miniature Quran stand dated to 1209-10 and which belonged to Iltutmish, a ruler of the Slave Dynasty of Delhi. It is currently on display at the Salarjung Museum in Hyderabad. 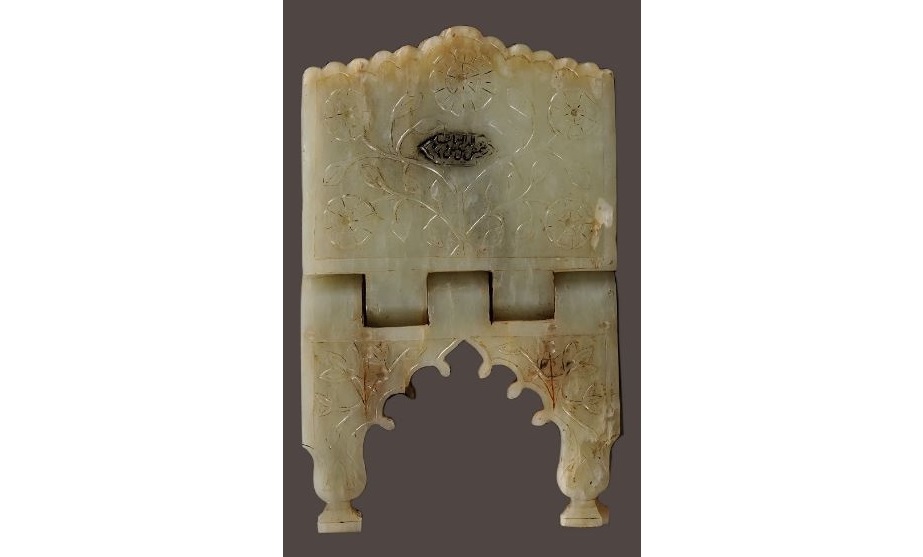 However, the art of jade carving reached an ‘aesthetic’ zenith under the Mughals, especially Emperors Jahangir and Shah Jahan. The Mughal fascination with jade was due to its association with Central Asian conqueror Timur (1336-1406). The Timurid dynasty, which controlled large parts of Central Asia, was one of the earliest grand Islamic kingdoms and they were very fond of their jade.

In fact, a solid block of green jade was installed on Timur’s grave by his grandson Ulughbeg (1394-1449) at his tomb, Gur-e-Amir, in Samarkand in Uzbekistan. 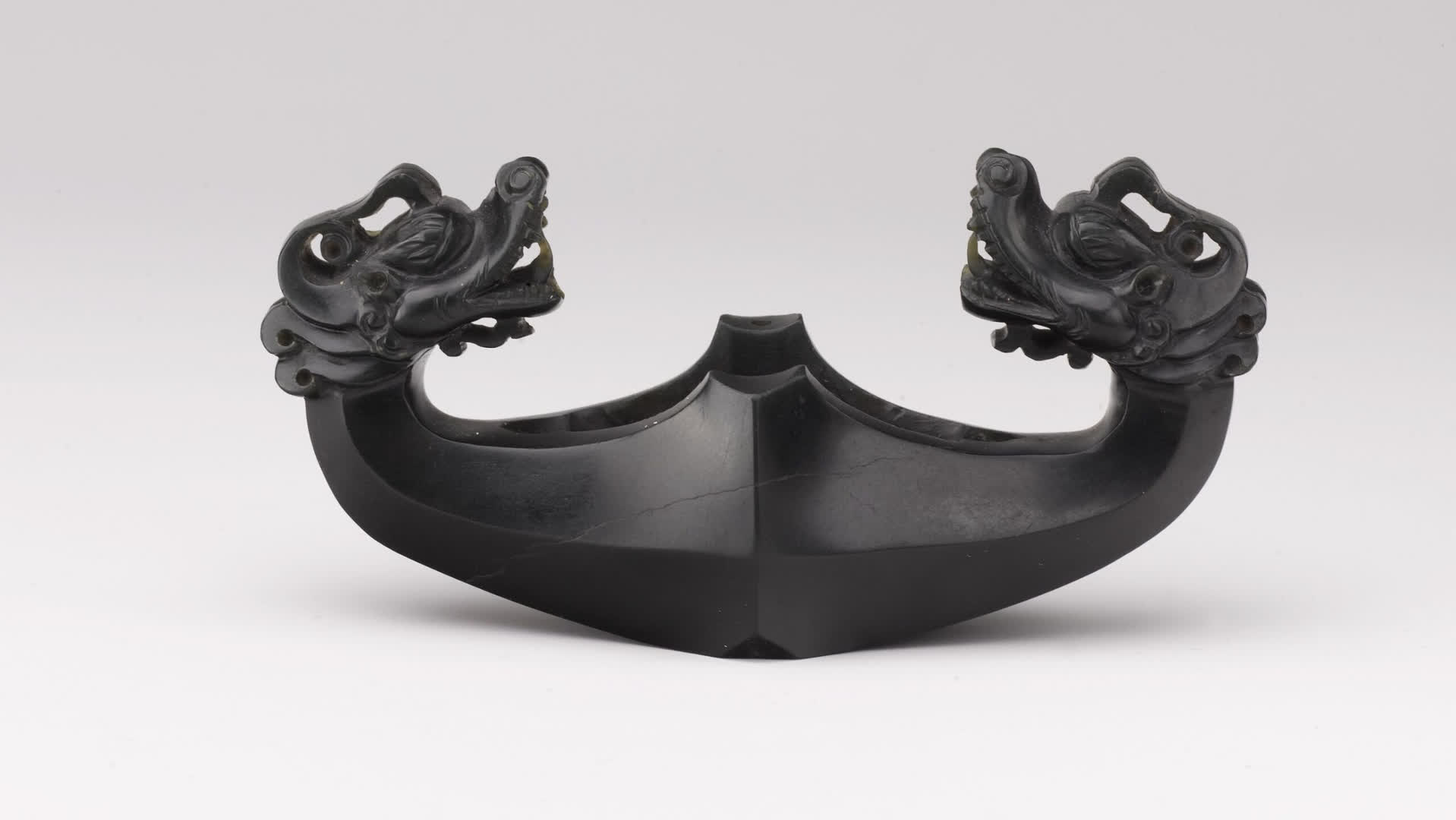 This association of jade with the Timurids was particularly significant since the Mughals were descendants of Amir Timur and often sought legitimacy through their connection with him. Patronizing jade was an extension of that. The Mughal jades were almost always made using nephrite sourced from Burma, Tibet or Kashgar in present-day China.

Jahangir was, in fact, a known collector of Timurid jade. 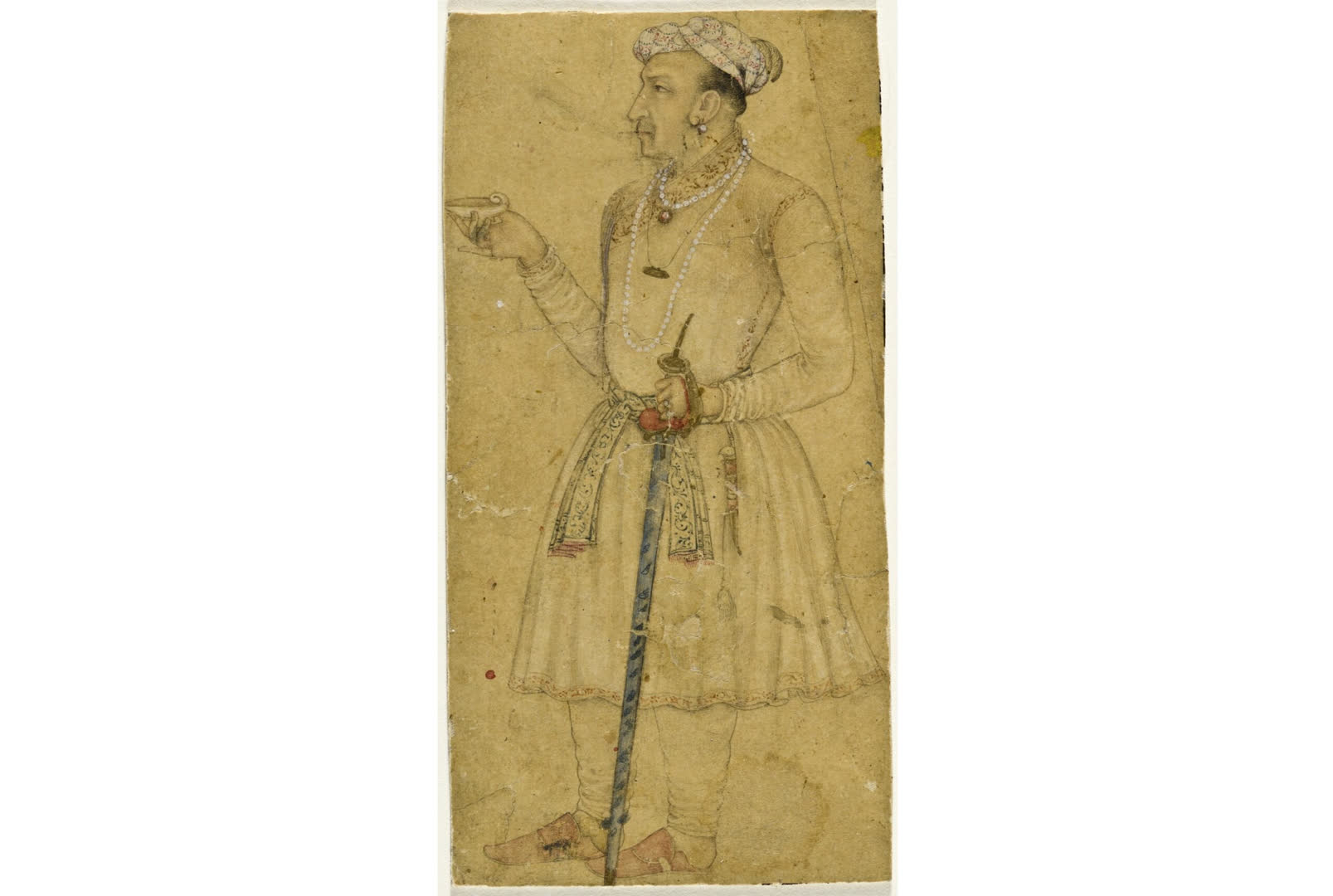 It wasn’t just this connection with the Timurids that made jade a favourite of the Mughals; they seem to have loved it for its opulent beauty, adaptability and also the mythical belief that it was could counteract poison. The range of jade items from the Mughal courts is wide, from luxury items, accessories, storage containers, jewellery, utensils, weapons and other martial accessories. It was the original material for epicurean luxury.

Most jade objects of the Mughal era can be classified into three categories: Ceremonial arms and martial accessories, decorative objects and accessories, and utensils and storage objects. Here are some stand-out pieces. 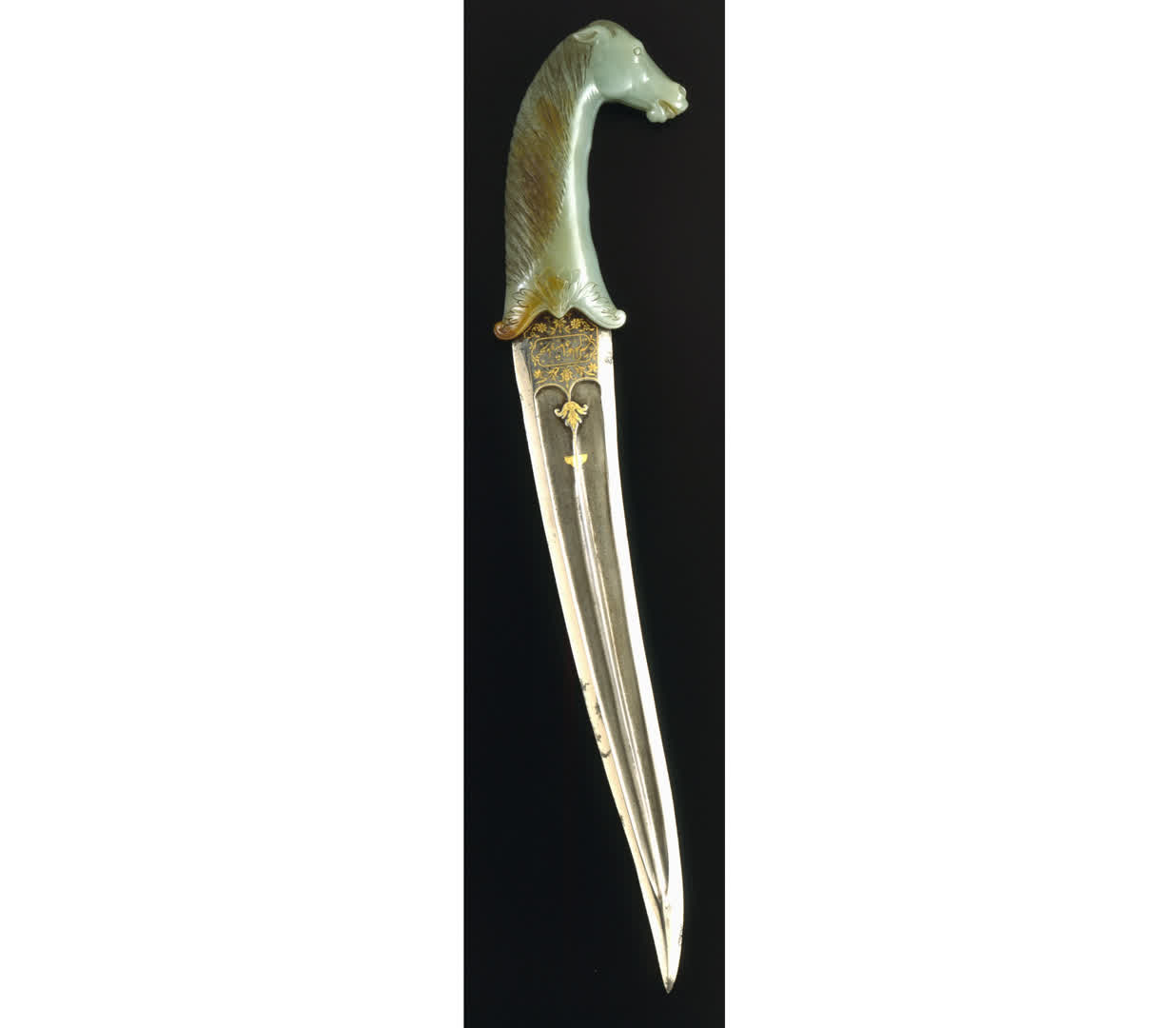 Martial pursuits were a significant aspect of Mughal life; it also decided an individual’s success and ascent in court.

This was signified by the apparel one wore in court, which is why ornate and ceremonial swords and daggers were a vital part of court apparel.

We can see dagger hilts, sword hilts and gunpowder horns of jade. These were often heavily ornamented, which tells us that they were used for pomp and show rather than on the field. Most of these objects can be found in private collections or museums. 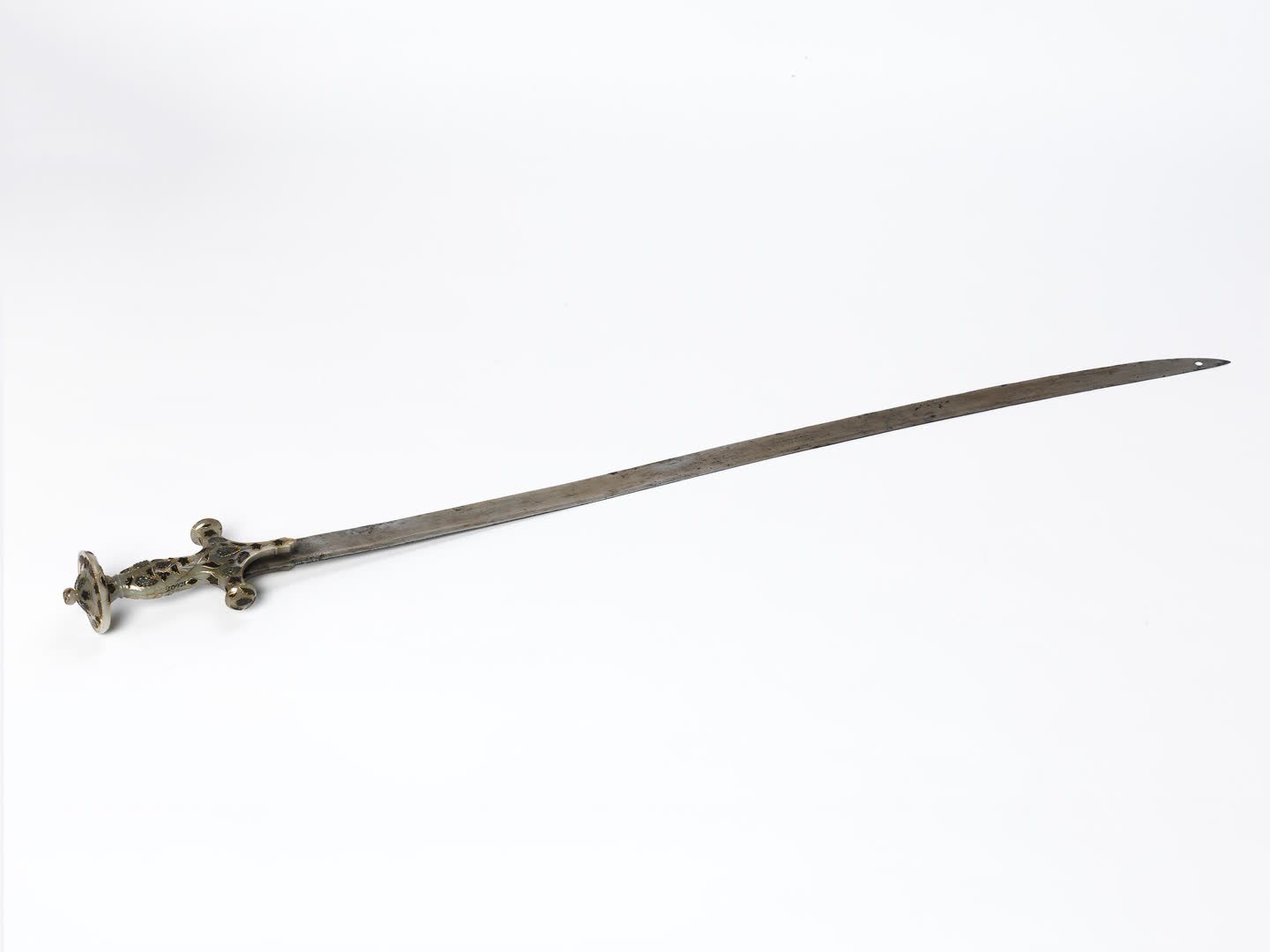 Dagger and sword hilts were often carved in the shape of animals or with floral motifs. Rams, lions, horses, nilgais, wild goats, sheep and camels have been found. 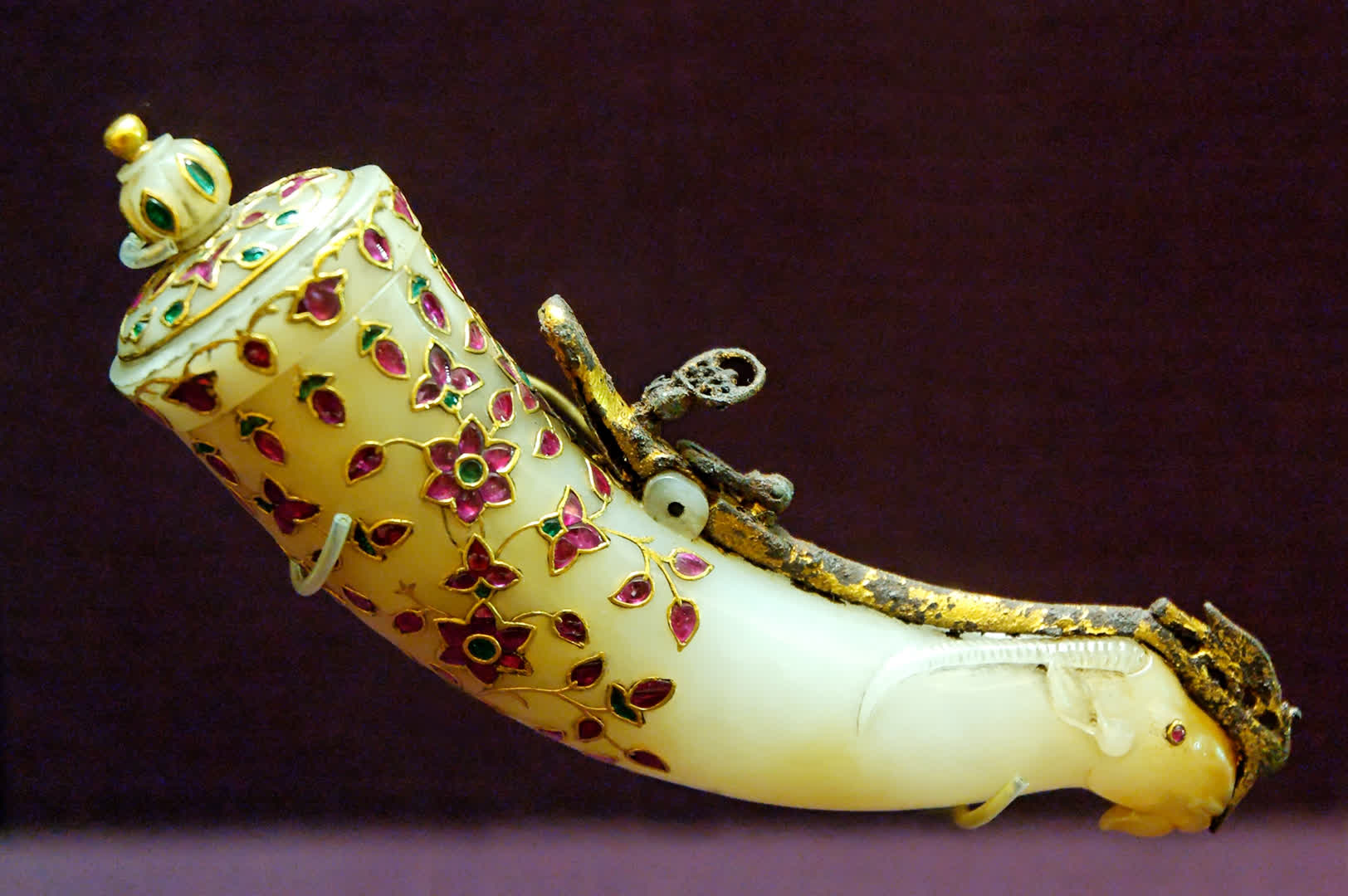 Gunpowder horn in jade is a much rarer Mughal artefact. With the coming of matchlocks in the later Mughal period, the need arose for gunpowder and horns to store a ready refill. Ornate horns with hunting scenes carved on them were commonly done in ivory but this particular horn in jade is one of the rarer ones. 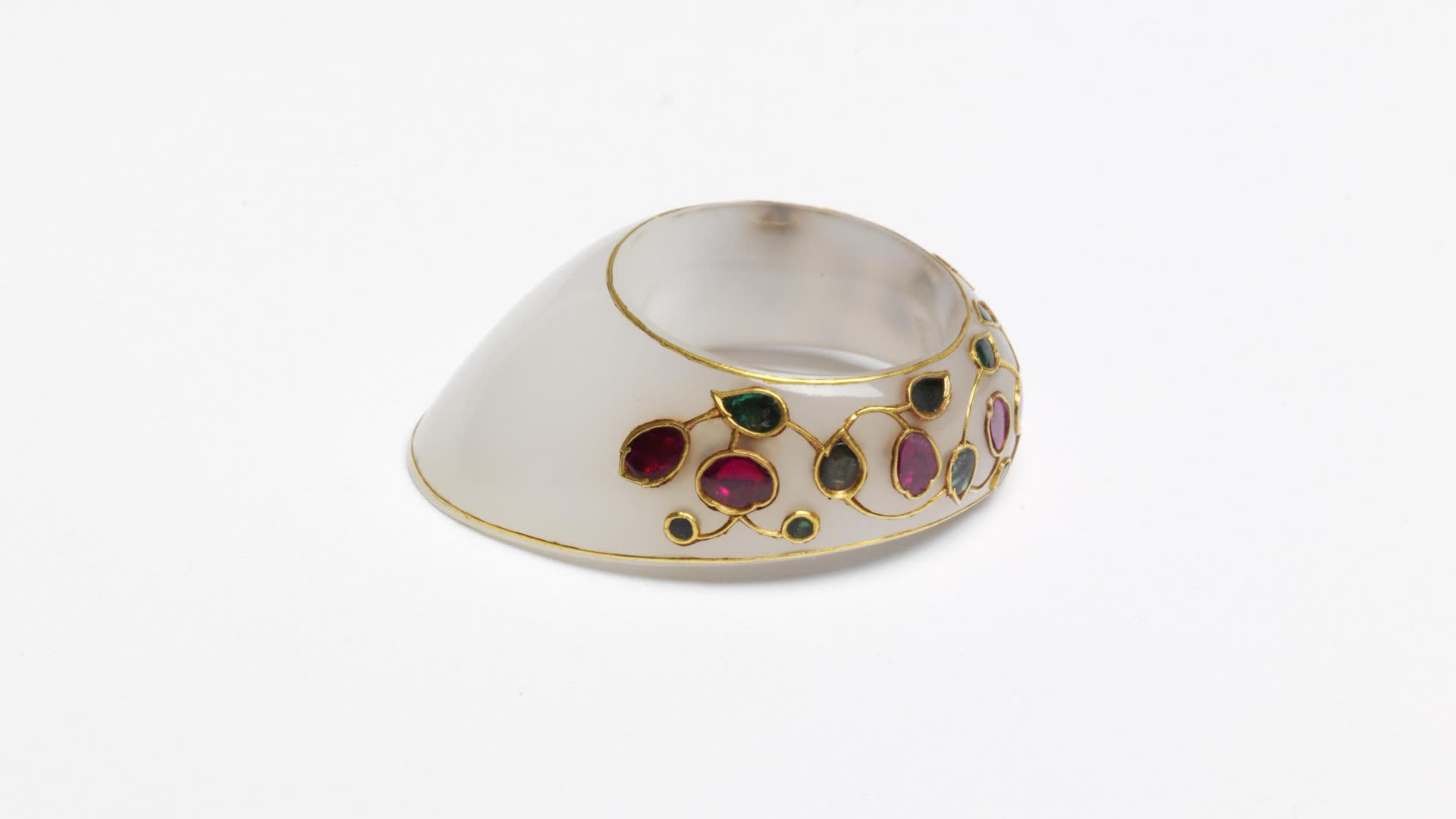 One can find many accessories and decorative objects from the 16th and 17th centuries from the Mughal courts. Although jade was significant and precious for the Mughals, it was ranked a little low in the list of materials prized by the Mughals. Thus, one sees only a few pieces of jewellery, like rings or pedants. We can find many more decorative objects like mirrors, jars, boxes and containers in jade from this period. 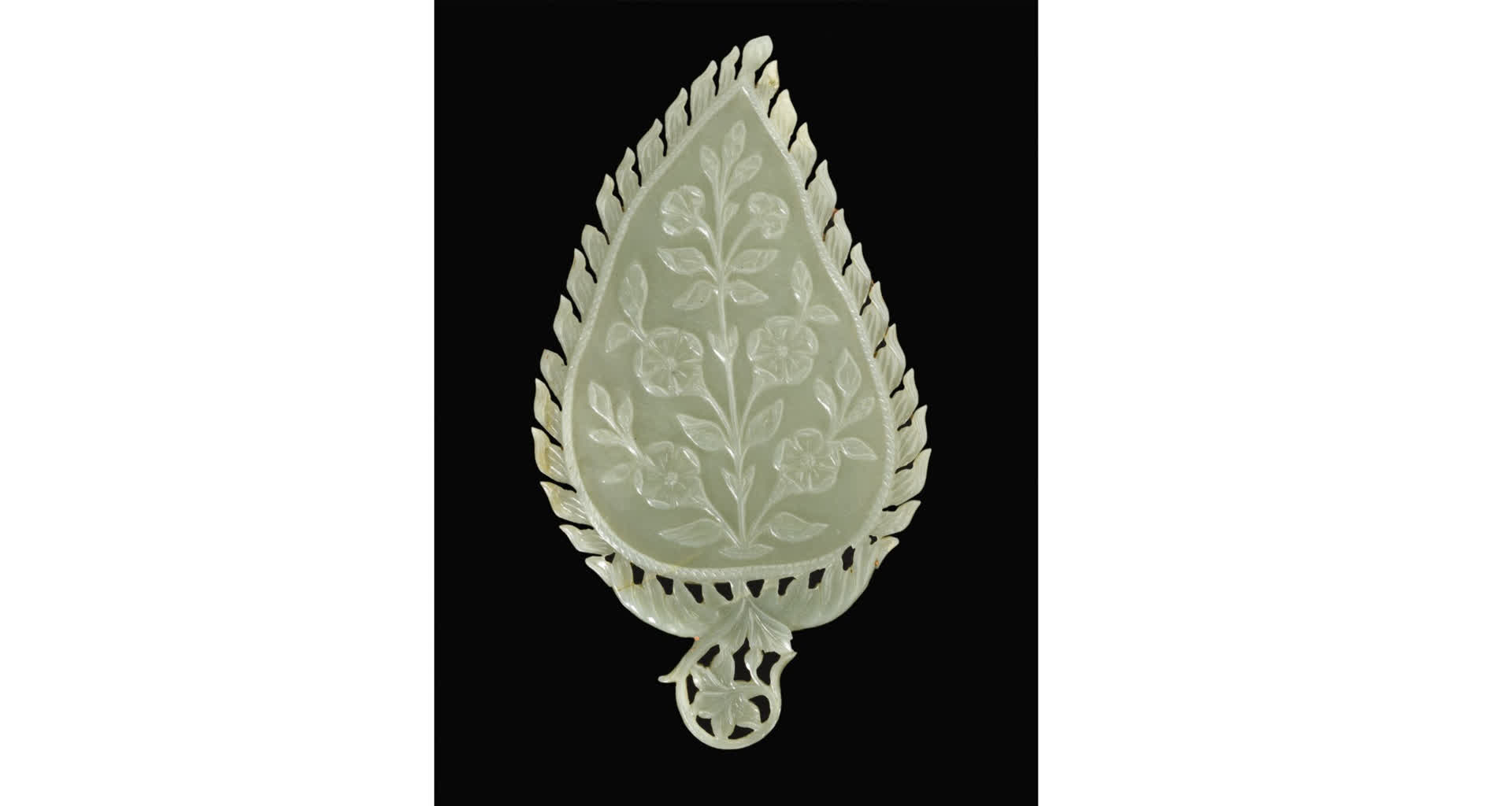 Mirrors first reached the Mughal court in the early 16th century and were imported as exotic curiosities. They were often framed in ornate jade and backed with the same.

This particular mirror, shaped like a leaf and with a blossoming plant on it back, illustrates one of the high points of Mughal craftsmanship. 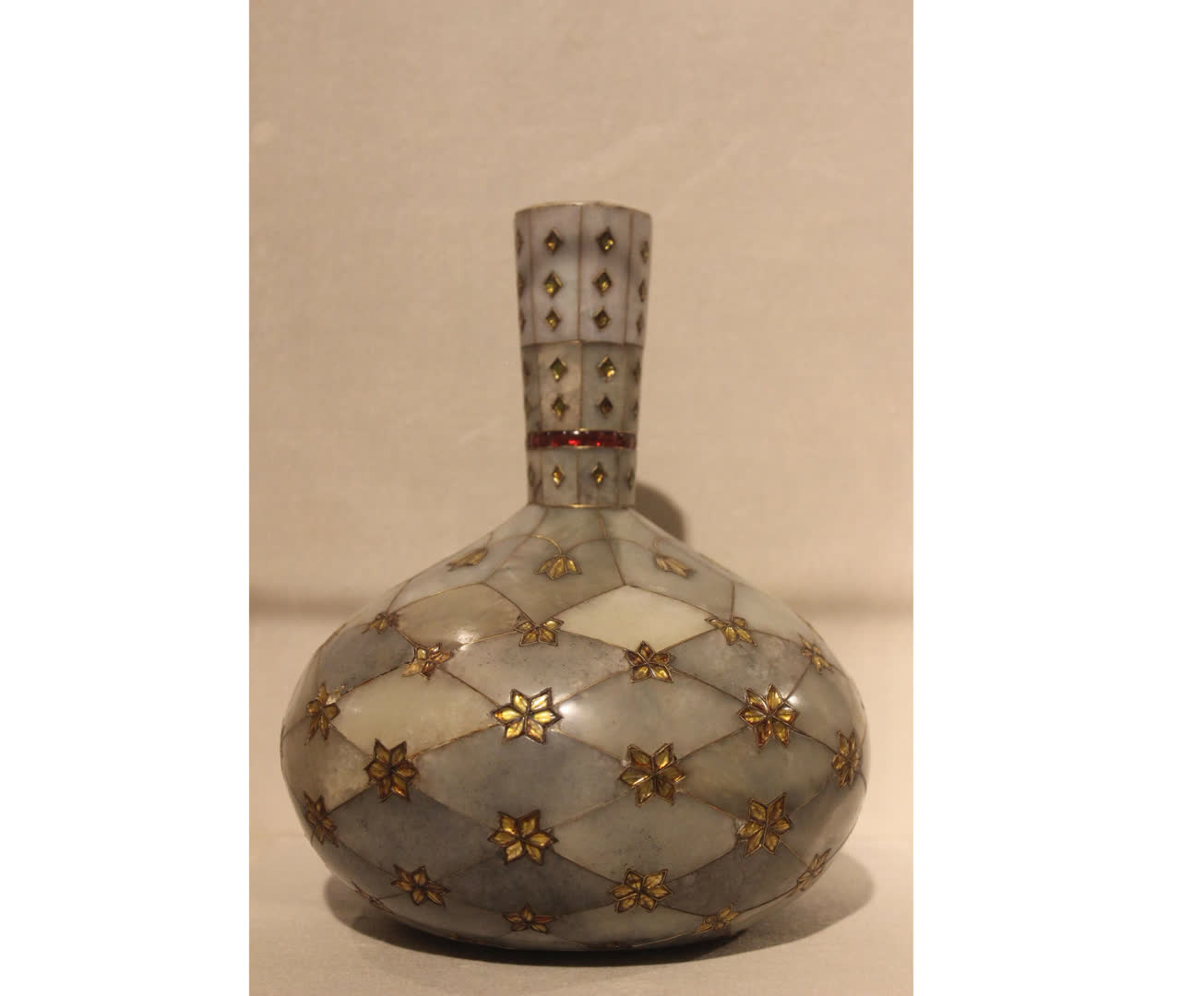 Most of the jade artefacts dating to the Mughal period comprise objects associated with food and drink. This may be partly due to the belief that jade acted as a counter to poison and not just its aesthetic appeal. One can find a range of objects, from cups, plates, spoons, bowls and spice boxes to wine cups, opium spoons, bottles and hookahs from this period.

William Hawkins, an English merchant who visited Jahangir’s court in 1609, stated that there were more than 500 precious drinking cups made of jade and other semi-precious stones in the Mughal treasury.

Some of the jade objects coming out of the Mughal ateliers were decorated with gold paint and precious and semi-precious stones like lapis lazuli, diamonds, rubies, emeralds and enamelwork, while others were left bare and carved in jade itself. 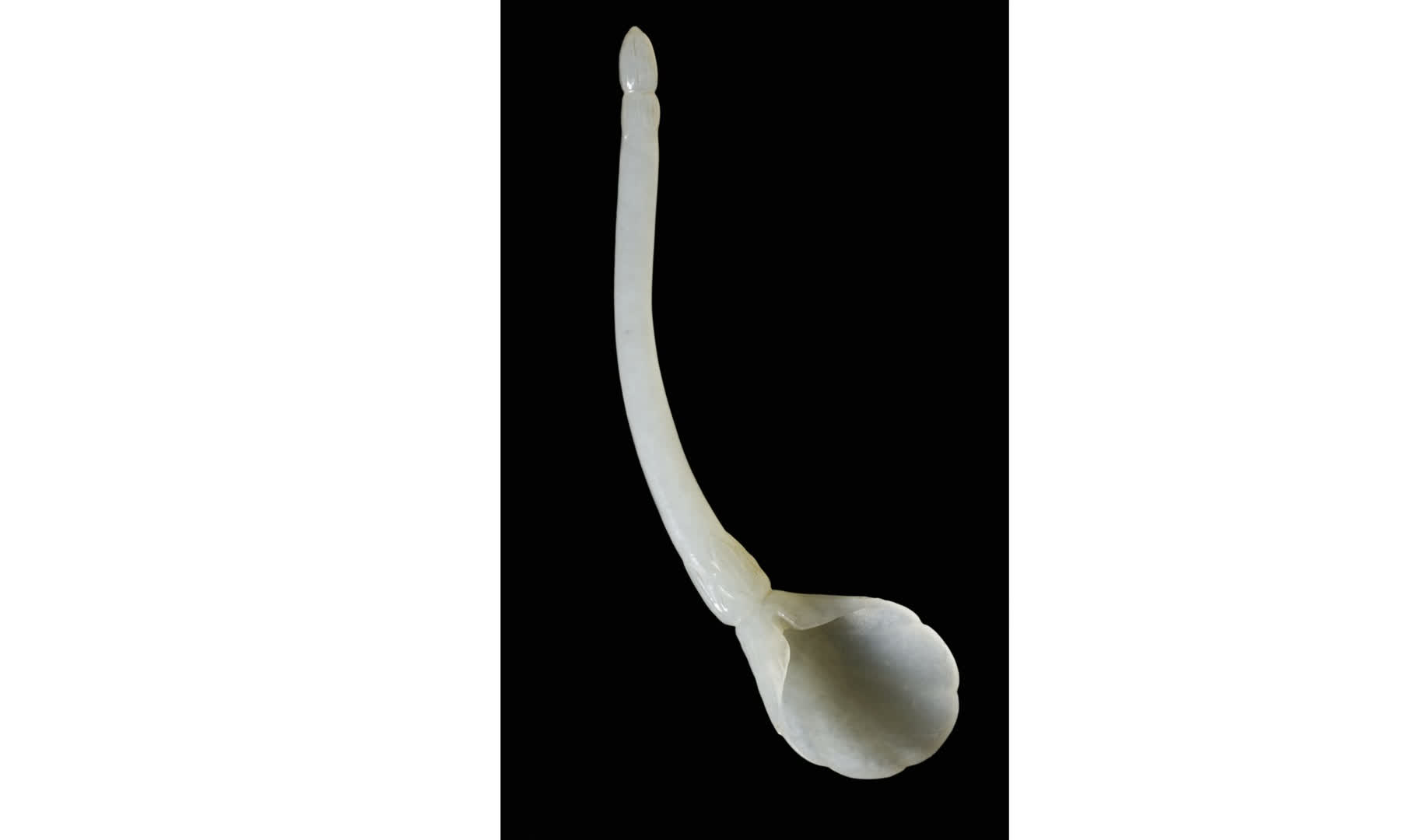 Nearly all jade objects are ornamental, with either floral or animal motifs. The acanthus and chrysanthemum were commonest among floral motifs, while the horse was the most ubiquitous among animal motifs. 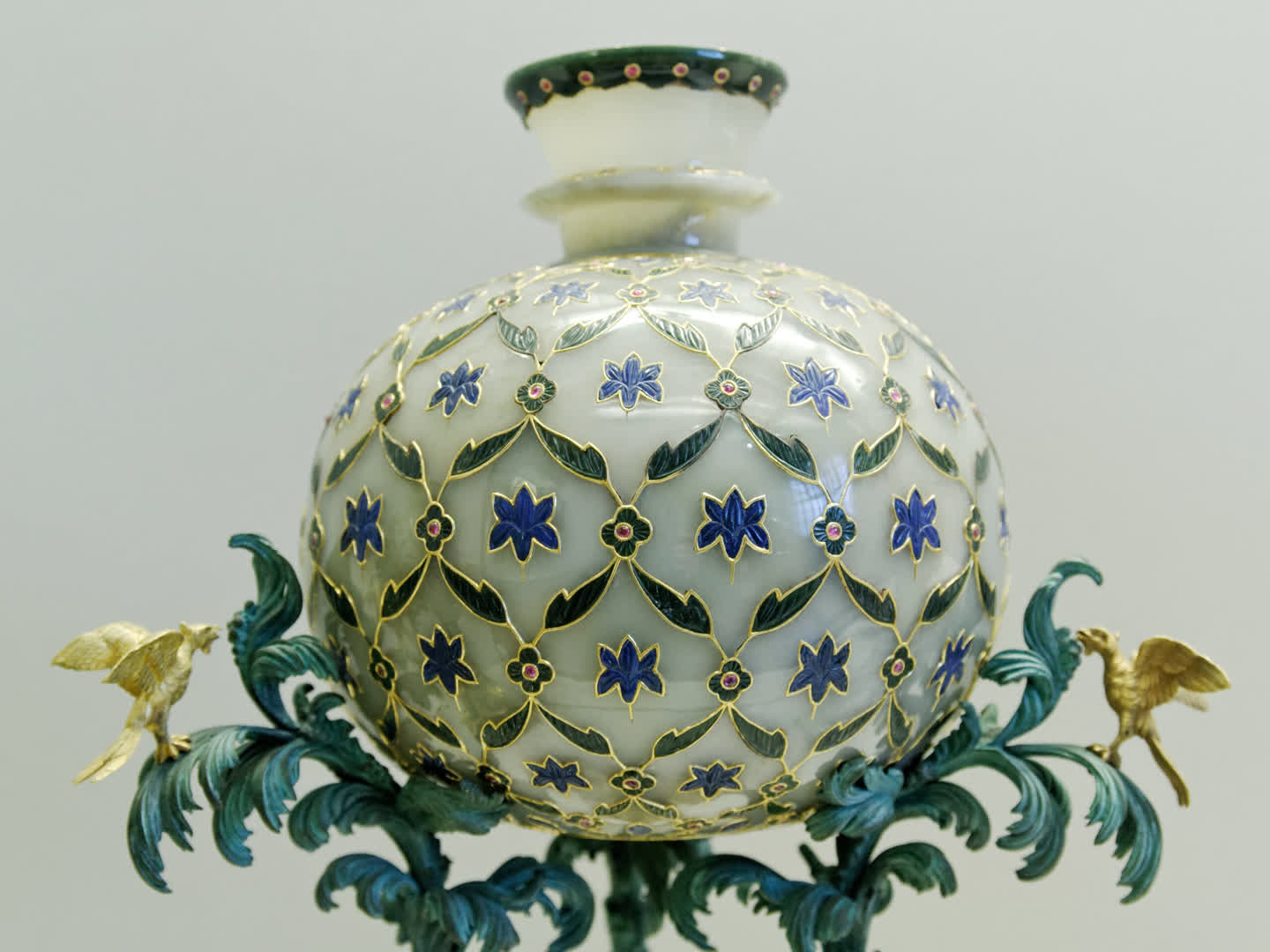 Jade continued to be patronised by the latter Mughal emperors but the kind of objects created during Jahangir and Shah Jahan’s time remains unsurpassed. While one can find some jade objects from contemporary and successor states of the Mughals, like the Rajput or the Deccani kingdoms, it was only much later, under the Nizams of Hyderabad in the 19th and 20th centuries, that we see significant jade collections – and much of it was of Mughal origin.

One can also see these objects in museums across the world, like the Metropolitan Museum of Art, Los Angeles County Museum of Art, Louvre Museum, British Museum and the Victoria and Albert Museum; and in India, at the National Museum in Delhi and the Salarjung Museum in Hyderabad, which have the most significant jade collections in India. 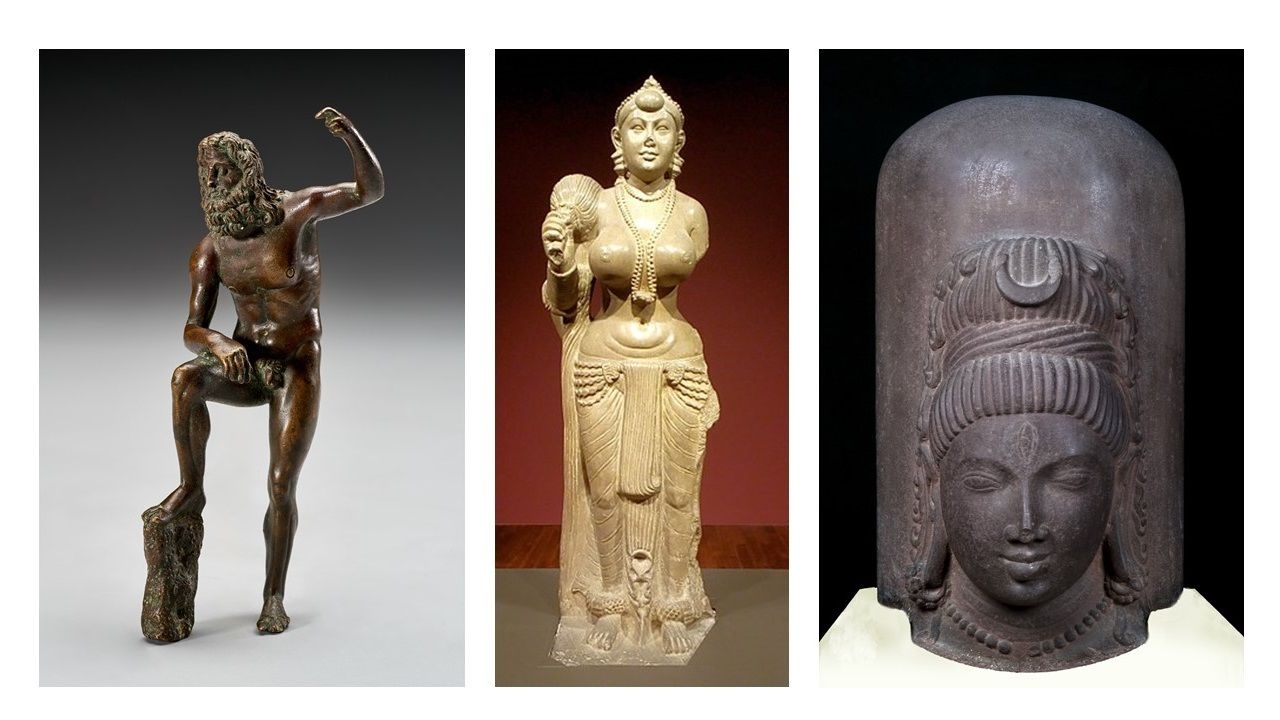 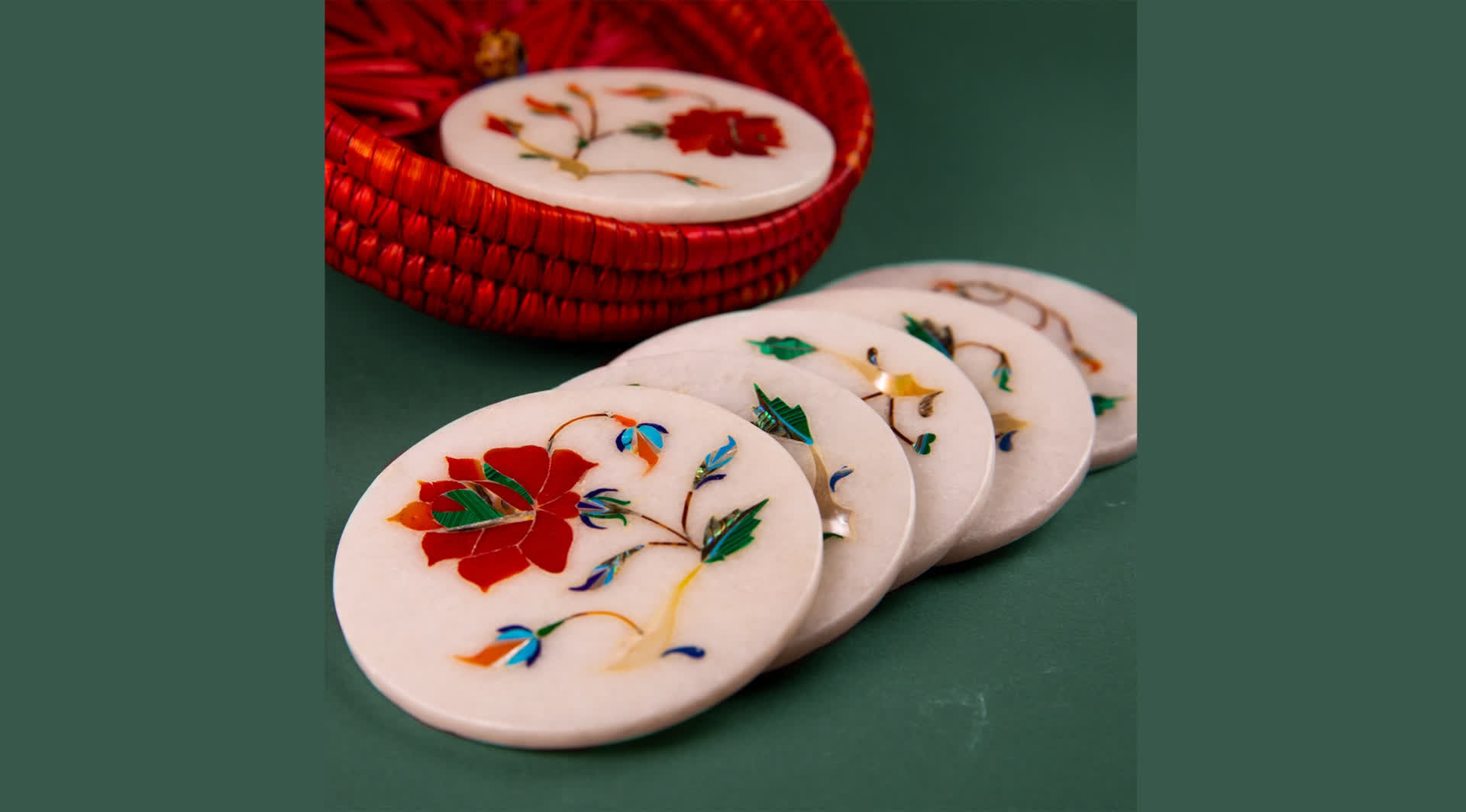 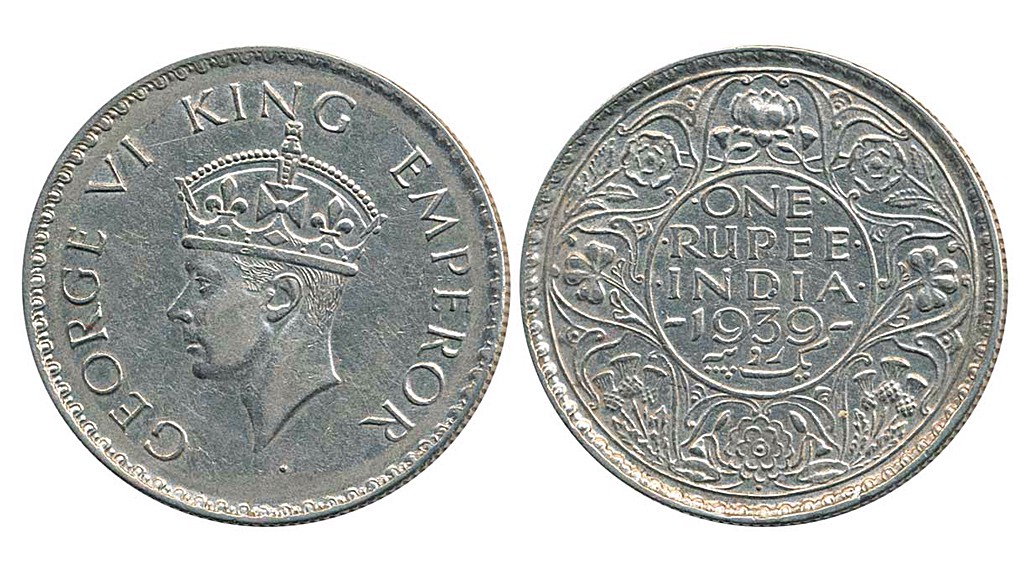 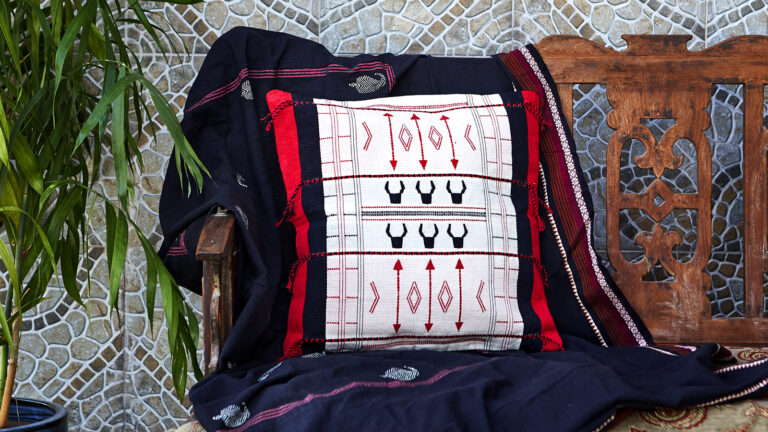 Think of it as colour coding, except that the ‘code’ is woven into exquisite shawls and other textiles. Catch the story of Naga weaves, a narrative tribal identity, valour, culture and pride spun on an ancient loom 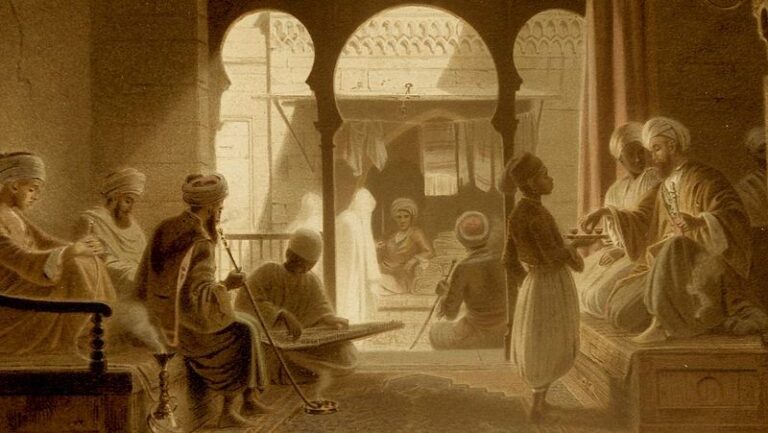 Believe it or not but India was not always a nation of tea drinkers. Coffee became the beverage of choice after a Sufi saint smuggled coffee seeds into India in the 16th century. Catch the extraordinary story of this heady brew as it travelled from Africa to the Middle East and then to India