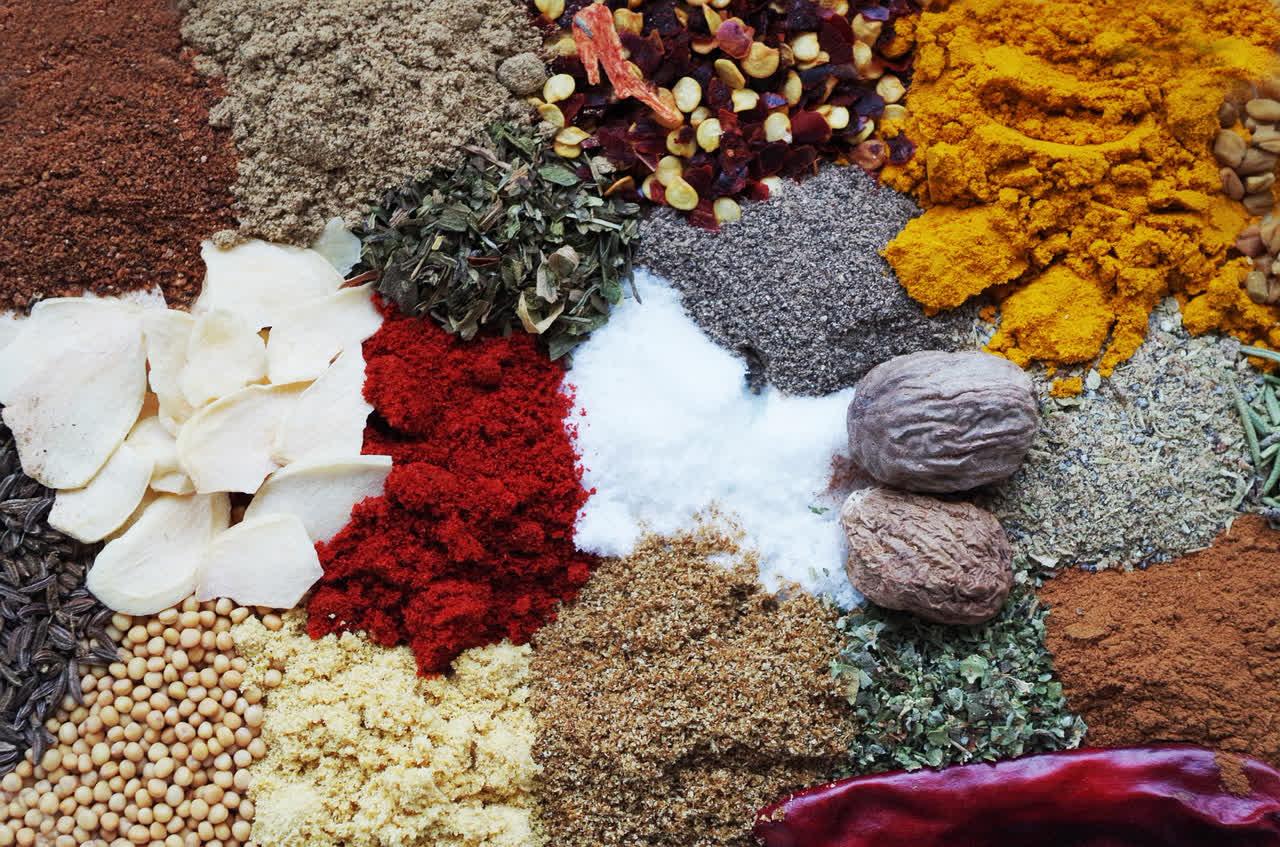 Spices form the heart of Indian cooking and why not? After all, many of them originate in India. Check out which and how far back they really go.

The quintessential feature of Indian food is, of course, the extensive use of spices.  The International Organization for Standardization (ISO) has registered 109 spices, of which 52 are supervised by the Spice Board of India.  Spices indigenous to India are ginger, turmeric, tamarind, black (also called round) pepper (Piper nigrum), curry leaves, pippali or long pepper (Piper longum), green and black cardamom, and holy basil or tulsi.  Some were used in the Indus Valley Civilization – analyses of the residue in cooking pots and human and bovine teeth (then, as now, cows were fed leftovers) at Farmana just 60 km from New Delhi confirm that between 2500 and 2000 BCE cooks were using turmeric, black pepper, ginger and garlic as spices – ingredients for a 4000-year old North Indian curry. Almost all the spices used in India today, except chilies and mint, have Sanskrit names, indicating their extremely long usage.

Sesame seed, one of the oldest oil-seed crops, originated in India and was domesticated very early. Spices that arrived from Western Asia in the very distant past included cumin, fenugreek, mustard seed, saffron, and coriander. Cinnamon from Sri Lanka, cassia from South China, and cloves and nutmeg from Indonesia reached India starting in the 3rd century CE and were cultivated here. 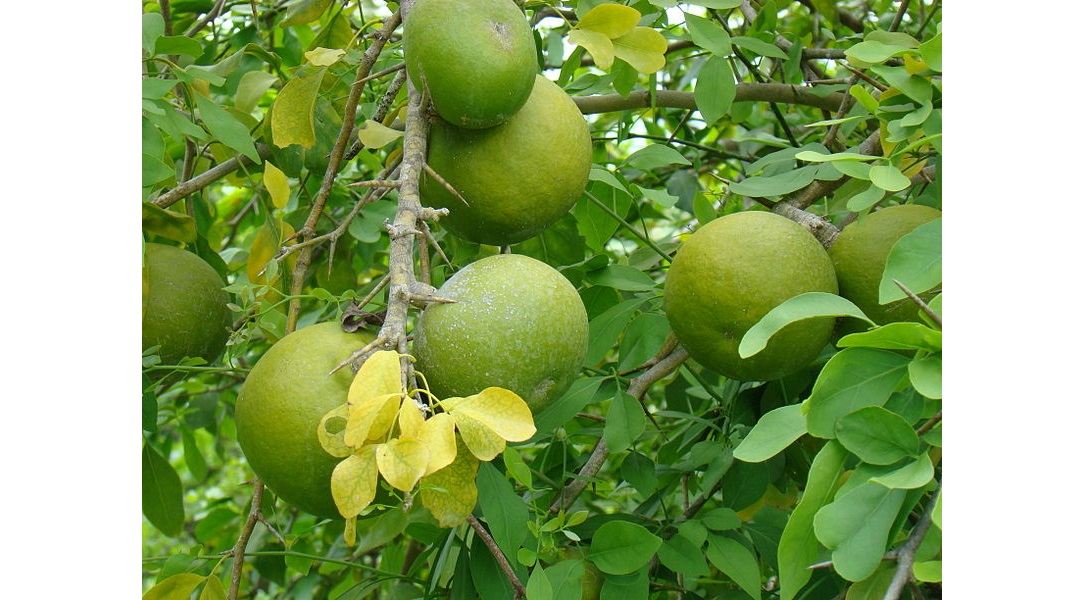 Onions had been grown in Southwest Asia from ancient times but are not mentioned in the earliest Indian texts. When the onion first appeared, it was regarded as a food of the local population and foreigners, which may explain later taboos. The betel vine (Piper betel) and betel nut (Areca catechu), may have initially been domesticated in South East Asia but soon became a part of Indian culinary and social life as the key ingredients in paan.

Fruits and vegetables that are likely indigenous to India include a wide range of tubers, pumpkins, melons, and gourds (many of which have no English equivalents, such as, kachra, tinda, kumra, parwal, and lauki/lau), eggplant/aubergine; green leafy vegetables collectively known as shaka in Sanskrit; amla or Indian gooseberry; ber or Indian jujube; jamun, a sweet-astringent plum-like fruit; bael, a hard-shelled fruit with a yellow aromatic pulp; many varieties of citrus fruit; jackfruit; and mangoes. 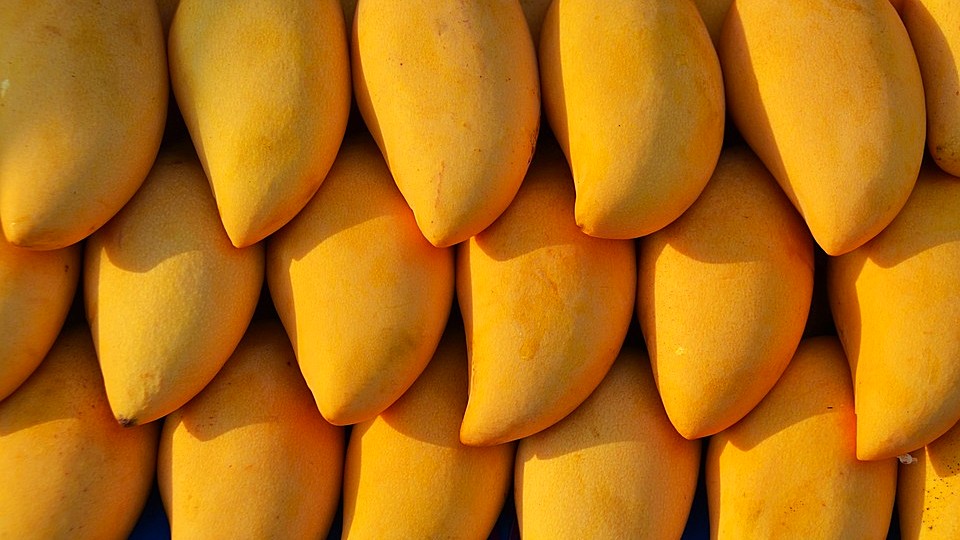 Today mangoes are one of the most widely grown fruit throughout the tropics.  They were brought from India to the Western Hemisphere as part of the Columbian Exchange – the term for the exchange of plants, animals, and technologies between the New and Old World following Christopher Columbus’ voyages. Starting in the 16th century when the Portuguese established trading posts throughout the Subcontinent,  a wave of fruits and vegetables arrived from South and Central America, including  papayas, guavas, chayote, sapodilla, avocado, potatoes, tomatoes, pineapples, cashews, and chili peppers, all of which thrived in India’s tropical climate. Chilies quickly became assimilated into Indian cuisine as a replacement for pepper. At the same time, many Indian plants were taken to the New World, including mangoes, bananas, coconuts, jackfruit and sugarcane.

The origins of coconut have been disputed. The current theory is that it originated in the Pacific but reached India at a very early date, perhaps by sea. Today India is the world’s third-largest producer and coconut plays an important role in some regional cuisines. The origin of bananas and plantains, members of the Musa family, is also problematic. Most likely they originated in New Guinea but were grown in India at a very early date. India is the world’s largest producer of bananas.  There are both dessert and culinary types of bananas, the later used in curries. 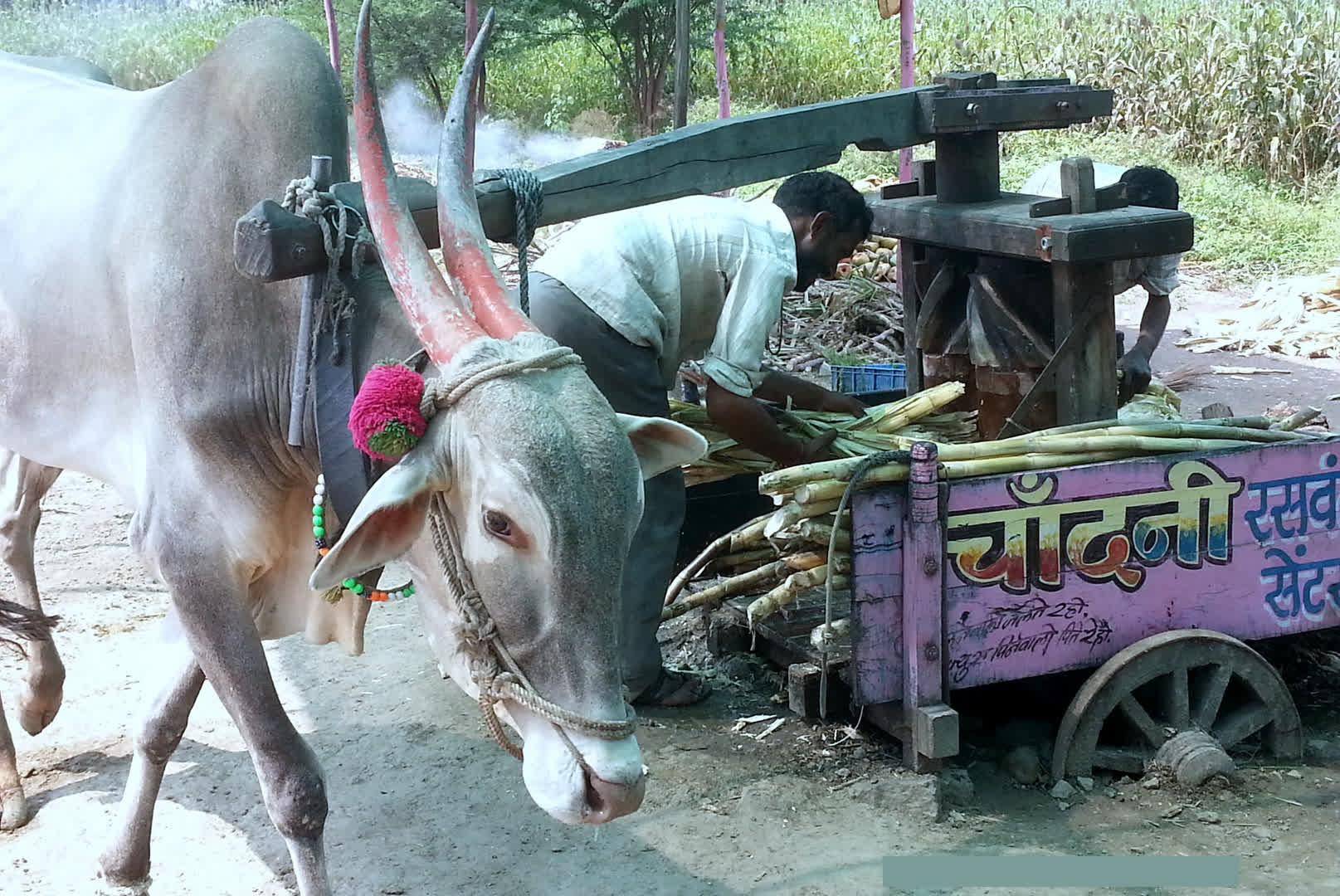 One of  India’s most important contributions to the world is sugar. Sugarcane is a perennial grass that was first domesticated in New Guinea around 8000 BCE and spread to Southeast Asia, China and India in prehistoric times. Its stems are filled with a sappy pulp that contains up to 17% sucrose. The conversion of sugar cane to products was discovered in India, probably during the first millennium BCE. The cane was crushed in a machine called a yantra, a large mortar and pestle turned by oxen that are still used in rural India.

The juice was filtered and cooked slowly in a large metal pot over a low fire fueled by the sugar cane stalks. The thickened juice, called phanita, was further concentrated and dried to make solid pieces of brown sugar, known as jaggery or gur (perhaps from the ancient name of Bengal, Gaura, famous for its superior varieties of sugar cane). The removal of more liquid yielded sandy solids called sarkara (the origin of the English word ‘sugar’).  Sugar has always played an important role in the Indian diet, and per capita consumption is one of the highest in the world.

The discovery that sugarcane could grow in the New World led to the rapid growth of plantations and the migration of millions of Indians to the Caribbean in the late 19th century. In the face of this competition, the Indian sugar industry declined and by the early 19th century was almost forgotten as sugar was imported from China and Southeast Asia. In 1912, the Sugarcane Research Institute was created to develop hybrid sugarcane using New World plants that were thicker, more insect resistant and had higher sugar content than Indian varieties. Production increased dramatically and today India is the world’s second-largest producer after Brazil.

Born in Toronto, Canada, Dr Colleen Taylor Sen is a Chicago-based author and culinary historian focusing on the food of the Indian Subcontinent.  She is the author of many articles and author/editor or co-editor of seven books including Food Culture in India; Curry: A Global History;  Turmeric: The Wonder  Spice; A Guide to Indian Restaurant Menus and Feasts and Fasts: A History of Food in India (named one of the best food books of the year by Vogue and The Smithsonian Magazine).