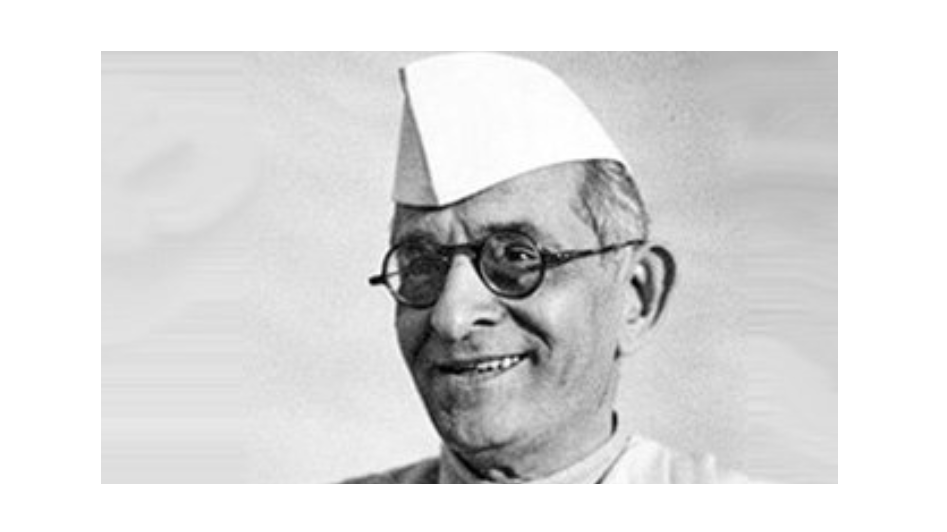 In the early 20th century, an epic trilogy on the Kingdom of Patan and its court drama fired the imagination of the people of Gujarat. The books became bestsellers and its author a household name. But while the literary genius of KM Munshi is well known, he played many roles other than that of a writer. Munshi was a lawyer, an educator, a freedom fighter and a politician. He was the founder of the Bharatiya Vidya Bhavan and the person behind the rebuilding of the Somnath Temple.

Kanaiyalal Maneklal Munshi was born on 30th December 1887 in Bharuch, Gujarat. He excelled at academics and enrolled at Baroda College for higher education. Here, one of his teachers was revolutionary leader Sri Aurobindo Ghosh, who influenced Munshi to join the freedom struggle.

In 1907, after topping his BA and LLB exams, Munshi arrived in Bombay to practice law, and after three years, registered as a lawyer at the Bombay High Court. His degree in law would later help take part in framing the Indian Constitution when he was appointed a member of the Drafting Committee under Dr BR Ambedkar. 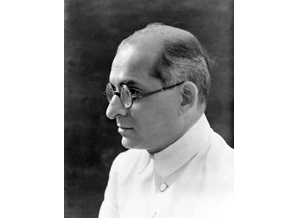 Meanwhile, Munshi took an interest in social issues and edited a journal named Bhargava, which advocated unity among castes, women’s education and widow remarriage. To set an example, he himself married a widow, Lilavati Seth, after his first wife, Atilakshmi Pathak, died. 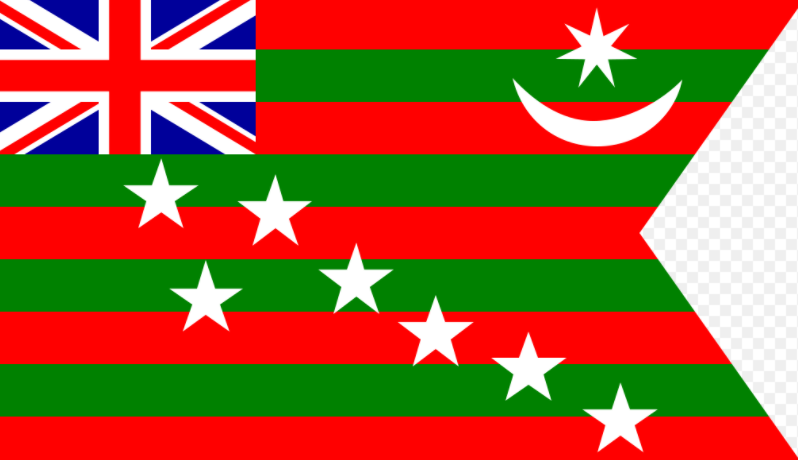 In Bombay, Munshi joined Annie Besant’s Home Rule League and met many leading freedom fighters of the time such as Surendranath Banerjee and Mahatma Gandhi. He participated in the Civil Disobedience Movement and was imprisoned twice. In his book The Ruin That Britain Wrought (1946), Munshi wrote:

“There is a hunger for Swaraj. That hunger is growing, growing till the stage where satisfaction cannot be denied. This hunger is not a matter of sentiment, not even the handiwork of, what at one time were dubbed, pestilential agitators. It is the work of the British. They came to this land a hundred and seventy-five years ago. They mastered it, controlled it, dealt with it—for their own good. They destroyed its industry, drained away its resources, kept it under-developed, under-nourished, backward—in their own interests.” 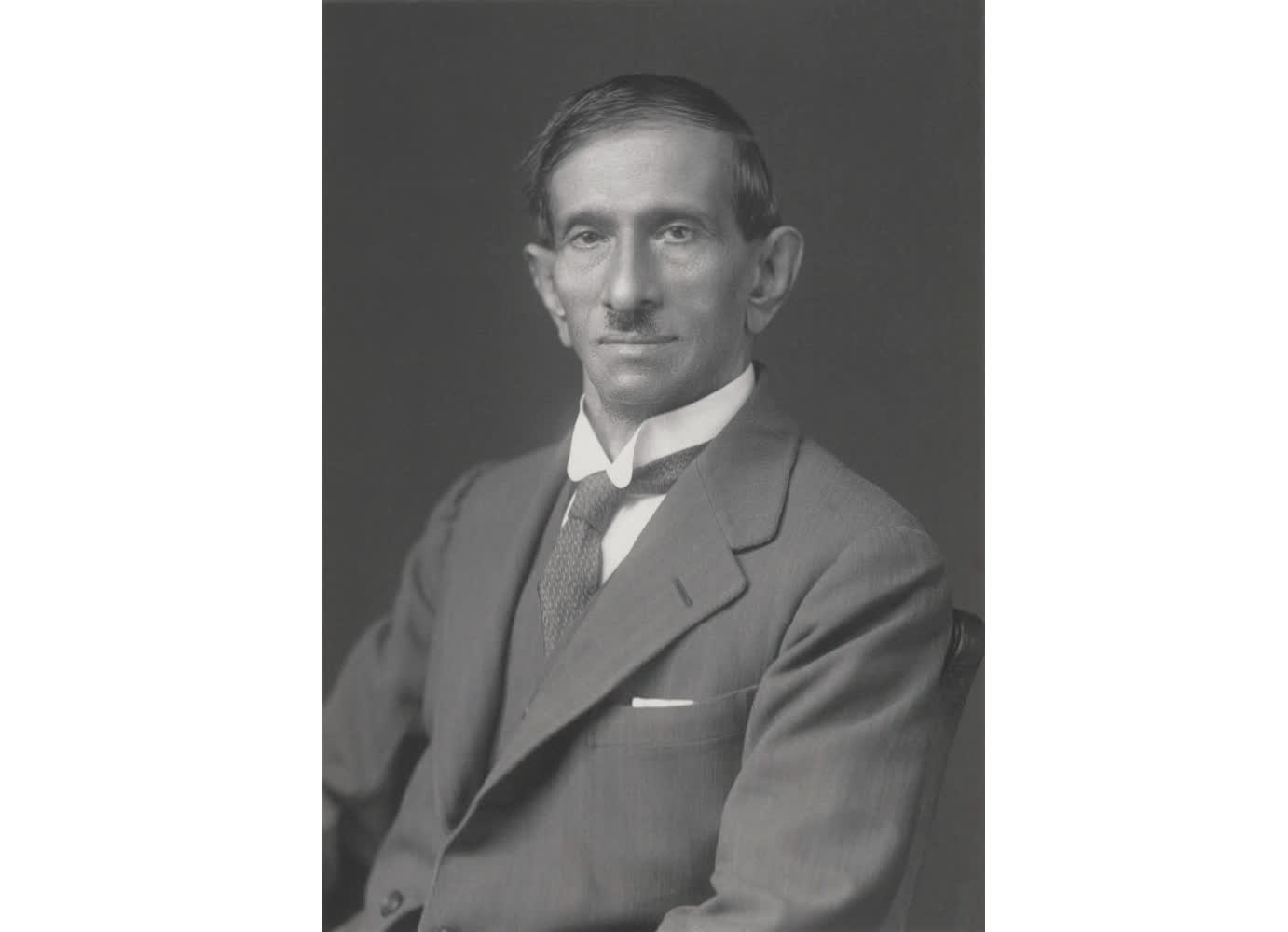 Munshi was also elected a Fellow of the University of Bombay. As a member, he brought new reforms that included giving Indian languages a specific place in the curriculum and even the establishment of the Department of Chemical Technology along with Chimanlal Setalvad, an eminent Indian barrister. He also led the passing of the famous University Bill, 1928 through the Bombay Legislative Council that highlighted the need for post-graduation, teaching and research facilities. He ushered in changes to the city of Bombay too. He established the Bombay City Ambulance Corps, which helped increase the number of ambulances within the city. 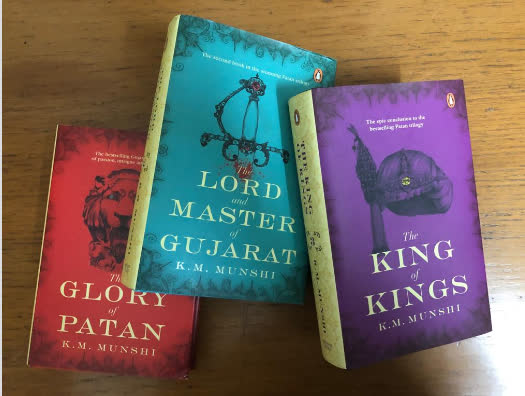 Due to his penchant for education and literature, Munshi took a sabbatical from his legal career in 1920 and established the Gujarati Sahitya Sansad to promote Gujarati literature. He also wanted to focus on his own writing, for which he had already earned fame. His Patan trilogy, a work of historical fiction, written in Gujarati and based on the Chalukya rule in Gujarat, was very well-received. Interestingly, he wrote under the pen name ‘Ghanshyam Vyas’.

According to Dr Darsha Jani, Principal of SR Mehta Arts College, Ahmedabad, and a literary critic, the trilogy –Patan ni Prabhuta (The Glory of Patan, 1916), Gujarat no Nath (The Lord of Gujarat, 1917) and Rajadhiraj (The Emperor, 1922) – gives a kaleidoscopic view of the political, social and cultural environment in medieval Gujarat, between the 9th and 12th centuries CE. The novels are set in a time when King Karnadev is on his deathbed and warlords are scheming to establish their independence.

It was Munshi who coined the term ‘asmita’ (pride) for Gujarat, a concept much debated in the politics of the state today.

He had a sense of rootedness in the region, locale and culture of India, and never underestimated tradition and continuity.

Munshi also wrote in Hindi and English, and most of his work focuses on historical and mythological themes. While pursuing his passion for writing, Munshi also participated in the Bombay Legislative Assembly election in 1937 and became Home Minister of the Bombay Presidency. He used this opportunity to give shape to his desire to create an academic institution that would preserve and propagate Indian culture. Thus, the Bharatiya Vidya Bhavan was established on 7th November 1938. It was supposed to propagate three values –Satyam, Shivam and Sundaram (Truth, Godliness and Beauty). The institution popularised Sanskrit and encouraged the application of lessons from the ancient epics and scriptures in life, but with a modern outlook.

Munshi, in his book Akhand Hindustan (1942), observes that most of the books on Indian history were written by foreigners and thus lacked an Indian perspective:

“Most of our histories of India suffer from a lack of perspective. They deal with certain events and periods not from the Indian point of view, but from that of some source to which they are partial and which by its very nature is loaded against India. The treatments of such events and periods become disproportionately large and detailed, leaving a distorted impression of the times.” 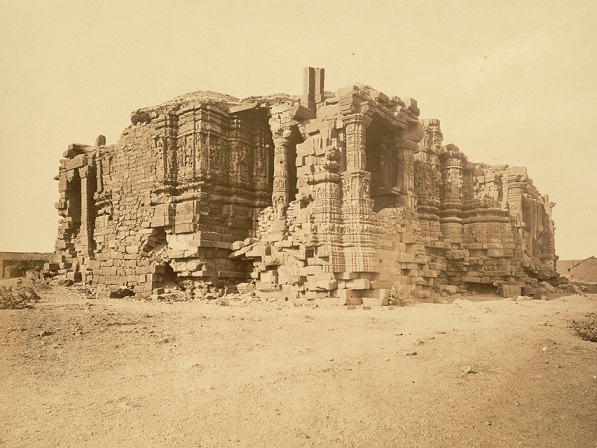 But one contribution of Munshi that is not remembered enough, because of its contentious nature, is the rebuilding of the Somnath Temple. Located in the coastal town of Veraval in Gujarat, the temple houses one of the 12 Jyotirlingas of Shiva and was repeatedly destroyed by Muslim invaders and then rebuilt. 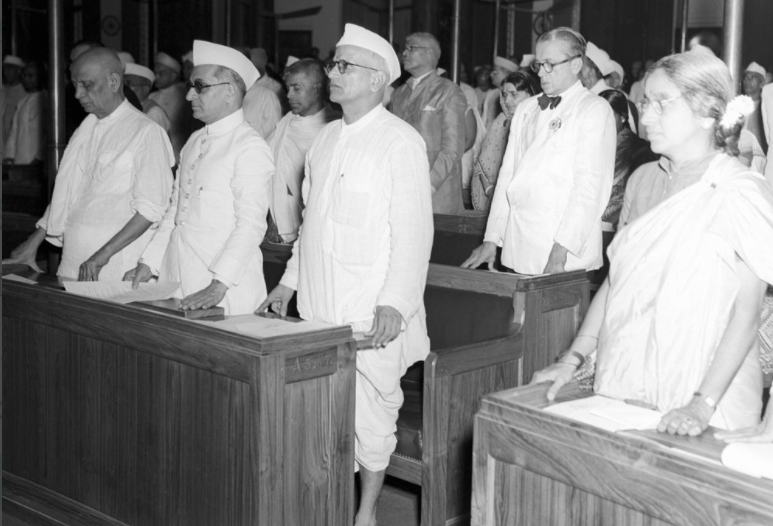 Before India’s independence, Veraval was a part of the Princely State of Junagadh. But at the time of Independence, its ruler, Nawab Mahabat Khanji III, decided to accede to Pakistan, claiming easy access to the country via sea. India refused to accept his decision and on 12th November 1947, Sardar Vallabhbhai Patel, India’s then Home Minister, NV Gadgil, Minister for Public Works, and Munshi, accompanied by the Indian Army went to Junagadh and got it to join the Indian Union. By then, the Nawab had fled to Pakistan.

During this visit, Sardar Patel saw the ruined state of the Somnath Temple and expressed a wish that it be reconstructed as an active temple. Some Congress leaders opposed the idea, suggesting that it be handed over to the Archaeological Survey of India and preserved as a historical monument.

However, the idea to rebuild the historic shrine received Gandhi’s support and he proposed that funds be raised from the public, so that the government would not be involved in a religious project. 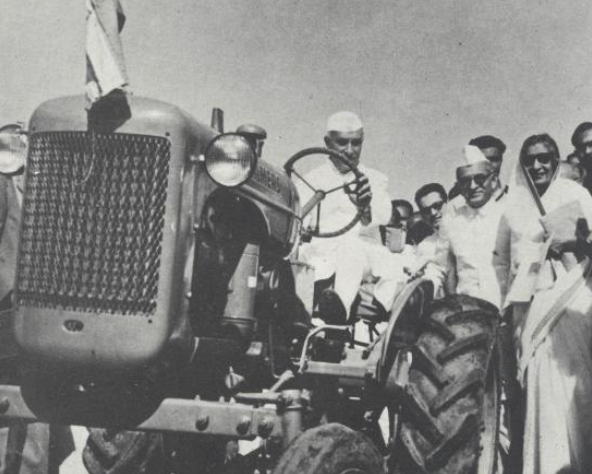 But the quest for rebuilding the temple suffered a setback when Gandhi and Patel died, in 1948 and 1950, respectively. Now, the responsibility rested on the shoulders of Munshi and Gadgil, who faced strong opposition by the then Prime Minister, Jawaharlal Nehru. He was totally opposed to Congress ministers being involved in a temple project.

But Munshi was adamant. He saw the temple not only as an ancient monument but as a symbol of India’s identity, one that had been battered and needed rebuilding.

“Desecrated, burnt and battered, it still stood firm – a monument of our humiliation, and ingratitude. I can scarcely describe the burning shame which I felt on that early morning as I walked on the broken floor of the once-hallowed sabha mandap, littered with broken pillars and scattered stones. Lizards slipped in and out of their holes and the sound of my unfamiliar steps, and Oh! The shame of it! – an inspector’s horse, tied there, neighed at my approach with sacrilegious impertinence.” 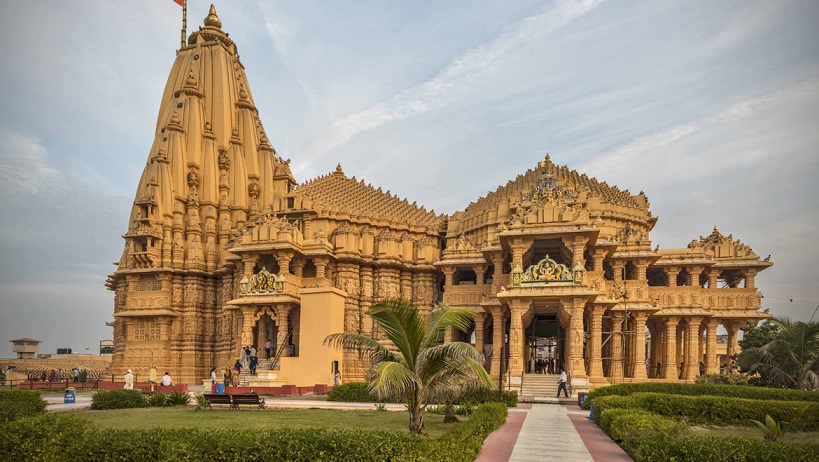 Munshi had referred to the temple and its desecration in one of his works in 1922, and how he felt. This was an opportunity to do something about it. Thus, in May 1951, Rajendra Prasad, the first President of India, on Munshi’s invitation, performed the installation ceremony for the temple. 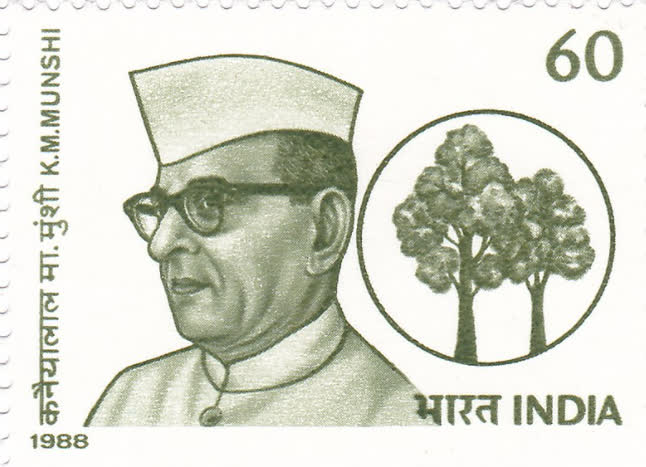 After Independence, Munshi was appointed Agent-General to the princely state of Hyderabad, where he served until its accession to the Indian Union in 1948. He also served as Minister of Agriculture and Food (1950-1952).

In order to increase the forest cover in the country, he conceptualized the Van Mahotsav, a week-long festival of tree plantation to be organised every year in July all across the country.

This event is still observed and Munshi is given due credit as the stamp issued in his honour by the Government of India depicts trees on it.

In 1959, Munshi left the Congress over ideological indifference over incoherent fiscal policies that he believed consisted of intellectual stagnation and co-founded the Swatantra Party along with C Rajagopalachari. But the party soon waned after some initial success. However, Munshi continued to hold prominent positions in prestigious institutions such as the Indian Law Institute, Delhi, and the All-India University Teachers and Students Camp, an institute of the Bharatiya Vidya Bhavan. During his final years, he established the Mahila Mandal School on the Bhavan’s College campus in Andheri, Mumbai. He passed away on 8th February 1971 at the age of 83.

Munshi’s legacy lives on in the many books he wrote and institutions he set up. K M Munshi was truly one of the architects of modern India.

On 14th September, 1949, 70 years ago, India’s Constituent Assembly adopted Hindi as the ‘Official language of the Republic of India’. On ‘Hindi Diwas’ here is the story of how a dialect spoken in a small stretch between Delhi and Meerut, grew to become our official Language.