If you think Goa’s glorious history is synonymous with the arrival of the Portuguese, here’s something that will surprise you. In the sleepy south is Chandor, the ancient capital of Hindu kings who brought riches and fame to this tiny coastal state

There isn’t much to go by – a headless Nandi bull, the ruins of a few old temples and the site of a mud fortification that has long since crumbled to dust. Yet these meager clues – believe it or not – are markers of a once magnificent city.

We are in Chandor, a sleepy village in South Goa, 43 km south of the state’s capital, Panaji. Well off the beaten track and definitely not on any tourist itineraries, Chandor was the ancient capital of Goa’s Hindu kingdoms before the arrival of the Portuguese.

For about a thousand years, up until the 14th century, this was a wealthy region that attracted traders from around the world. Chandor, then known as Chandrapura, flourished due to rich deposits of iron ore in mines deep in the forests of Goa. Placed perfectly in a curve where the Kushavati river flowed into the mighty Zuari river to its north, Chandrapura was able to easily transport the ore across its rivers and export the commodity overseas. 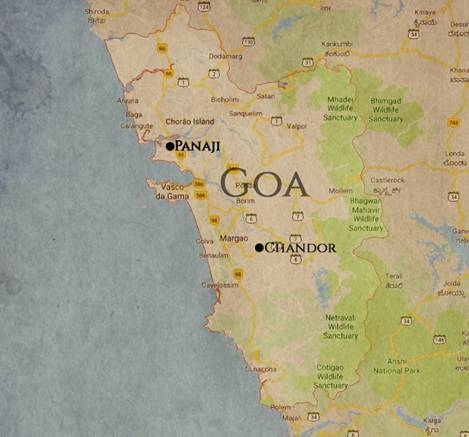 The New and Old Capital on the Map | Team LHI

The Zuari was Goa’s largest river and it flowed all the way to the Arabian Sea, connecting the Kushavati to trade on the West Coast. The Kushavati also flowed south into Karnataka, which linked Chandor to Mangalore, a southern gateway, for trade with the Arabs.

The Kushavati river has historically been very important for Goa. It was the seat of an ancient culture known as Kushavati Culture dating back to 8000 to 6000 BCE. This culture was discovered in 1993, through a series of ancient petroglyphs or rock etchings found on the west banks of the Kushavati river. 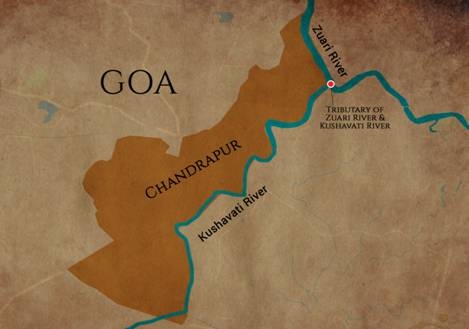 From here, they managed trade in the port towns of Kandra, Galgibag, Kadwad (in Karwar) and Agonda in South Goa and present-day Karnataka. They also established trade links with the hinterland, making Chandrapura a junction for caravans coming from Chiplun and Chaul in coastal Maharashtra. 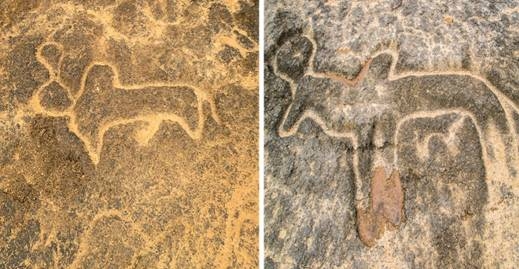 Petroglyphs on the banks of the River Kushavati | Dipika Bhomkar

By the 6th century CE, the Bhoja rule in Chandrapura began to wane, following the decline of the Satavahanas in the 4th century CE. For the next few centuries, Chandrapura’s importance as a capital dwindled, and it was reduced to being merely a pit stop en route to other port towns. 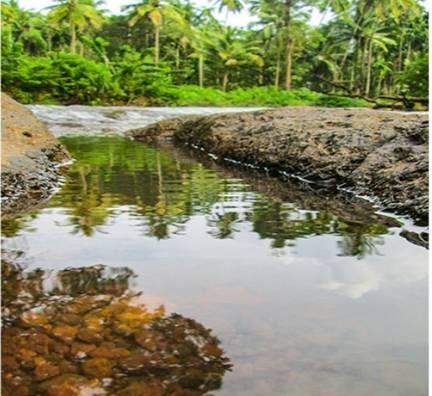 It was only in the late 10th century CE that the town witnessed a reversal of fortune, with the rise of the Kadambas of Goa. Originally feudatories of the Chalukyas, Kadamba ruler Sahastadeva I proclaimed his independence, making Chandrapura his capital in 960 CE.

The Kadamba rulers were great patrons of maritime trade. In the 11th century CE, Jayakeshi I, Sahastadeva’s successor, took a decision that would bring immense wealth to the kingdom and make Chandrapura the most opulent of all towns in ancient Goa – he opened up Chandrapura to trade with the Arabs.

The town began trading with the ports of Aden, Cane and Muza in the Arabian Peninsula.

At that time, Chandrapura, along with Gopakapattanam (present-day Goa Velha) and Ela (present-day Ella) due north, were important economic centres that expanded as maritime trade with the Arabs grew.

Interestingly, noted maritime historian and Jawaharlal Nehru University Professor, Pius Malekandathil, in his book, Maritime India, reveals that the name ‘Chandrapura’ began appearing frequently in the writings of Arab navigator, Al Idrisi (1162 CE), who referred to Chandrapura as ‘Sindabur’, the ancient Arabic name for the capital. Idrisi gave a fascinating account of the place, calling it a ‘commercial town’ with ‘fine buildings’ and ‘rich bazaars’. He also made note of its strong trade links with Tana (present-day Thane near Mumbai) and Baruj (present-day Bharuch in Gujarat). 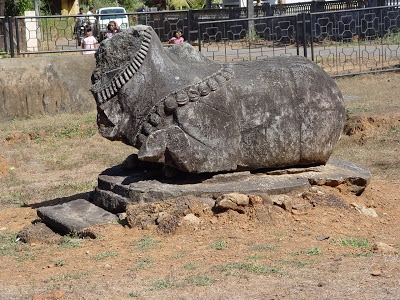 The rulers figured that only way trade could flourish in Chandrapura was if heavy taxes were imposed on its inhabitants. Taxes were imposed on the industries within the town, from bangle-making to pottery. The inhabitants were able to pay these taxes quite easily, which says a lot about the high standard of living.

Goa University Professor Nandkumar Kamat, in his extensive study on ancient Goan urbanism in his research paper Urbanisation in Goa: The Past 2000 Years, reveals that at its zenith, around the 11th century CE, Chandrapura’s population had increased to 75,000. The town had a citadel, royal quarters, a fort, a temple and bazaars, which were connected to the Deccan markets of Supa in Ahmednagar and Banavasi in Karnataka.

Coins issued by the Kadamba dynasty in the 11th century | www.coinindia.com

The Kadambas expanded Chandrapura’s trade relations, making it a satellite town on the long-distance trade route from Muscat in the Persian Gulf to Canton in South China. After setting up these large trade networks, the capital prospered economically under the Kadamba reign and became Goa’s epicentre for trade and commerce.

However, the construction of a certain inter-land route changed the game for Chandrapura in the mid-11th century. They built the ‘Kadamba road’ between Gopakapattanam (present day Goa Velha), located on the Zuari river, and Ela on the Mandovi river, to facilitate inter-port interaction. This route grew extremely profitable and convienient for the Kadamba rulers and they saw Gopakapattanam as their new political headquarters.

Moreover, the Kushavati river was by now heavily silted as firewood had been cut from the hills on a large scale to build residential buildings in Chandrapura. Finally, in 1054, the Kadambas shifted their capital from Chandrapura to Gopakapattanam and ruled from there.

After three centuries of economic prosperity, the Kadambas faced their downfall in the 14th century, when Malik Kafur, a general of the Delhi Sultanate under Alauddin Khilji, invaded Goa in 1310 and raided Gopakapattanam, looting the possessions of the Kadambas. The region saw two more invasions, first by Muhammad-bin-Tughlaq, the Delhi Sultan, in 1327, and the second by Jamal-ud-din of Honavar, the ruling chief of Honavar (in present-day Karnataka), in 1342. Interestingly, the famous Arab traveller Ibn Battuta was a participant in the Nawab of Honvar’s invasion and wrote about it in his famous travelogue. About the invasion of ‘Sindabur’ (Chandrapura) located in ‘Koah’ (Goa), Battuta wote:

‘The King (of Honavar) was preparing for an expedition against Sindabur, for which he had prepared fifty two vessels… Three days after setting sail, we arrived at Sindabur, which has 36 villages (present-day Tiswadi). On this island are two cities, first built by the Pagans (Hindus) and the other one by the Musulmans when they conquered the city for the first time… There we found people prepared to resist us and a hard battle was fought.’ 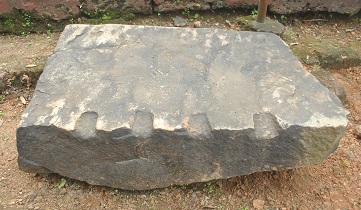 Footprints of the Queen | Nisser Dias

The final axe fell on the Kadambas in 1350 CE, when Goa became part of the Bahmani kingdom. The territory kept changing hands, coming under the Vijayanagara and Adil Shahi kingdoms before finally being captured by the Portuguese in 1510 CE. According to legend, the local Kadamba ruler Harihar received no support from his people while fighting the Portuguese and was killed. His wife, the queen of Chandrapura, cursed the town, saying that all their women would turn into widows. She went on to stomp her feet on a stone outside a temple. A stone bearing her ‘footprint’ is maintained in present-day Chandor to this day. 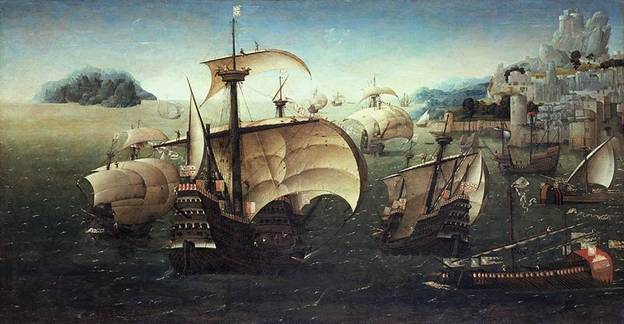 When the Portuguese arrived in Goa, Chandrapura was only a small village. On the other hand, Ela, located north along the Mandovi river, had been carrying most of Goa’s trade and was very prosperous. The Portuguese made Ela their capital, stopped the Arab monopoly over trade and retained Chandrapura as a minor trade outpost. Under the Portuguese, Chandrapura became ‘Chandor’ and most of its inhabitants converted to Christianity. 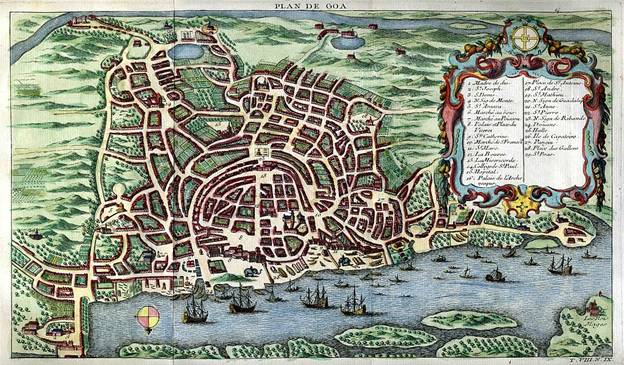 The Portuguese observed that there were unusual tropical diseases prevalent in South Goa, which had afflicted their viceroys and noblemen. The most dangerous of these appeared in 1635, when a cholera epidemic gripped Chandor and Goa Velha. This forced the people along with the Portuguese government to abandon cities like Chandor and Goa Velha and move to Panaji in the north. Slowly, over the years, Chandor slipped into obscurity.

In the late 17th century, the King of Portugal gave a grant to the Braganza family in Chandor, who built the large ‘Braganza mansion’, the largest and most opulent colonial house of its kind in Goa. A scion of the family, Luis Menezes de Braganza, would play a very important role in Goa’s freedom struggle. 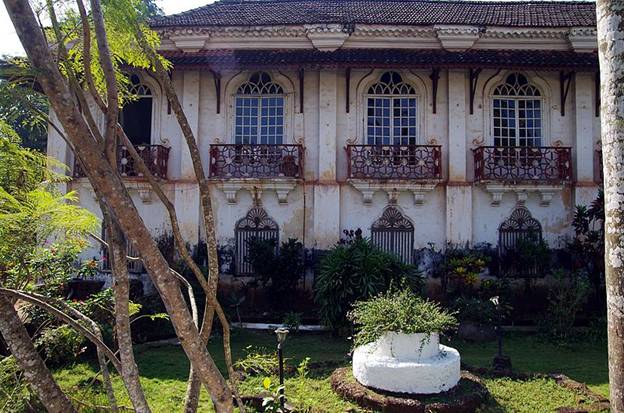 Today, there is little or nothing tangible left of Chandrapura, the ancient capital of a state now only viewed as a hugely popular vacation destination. Why, even the ancient mud fortifications of the Kadambas, still visible till the 1970s, have since completely disappeared. Some of Chandor’s splendid past can be inferred from folk tales and in ritual practices observed to this day. But, for the most part, her ancient glory has been consigned to a handful of relics and, of course, the history books.