It is one of India’s most exquisite monuments and it has survived only because it was buried under the ground for centuries. Ran-ki-Vav is one of the most visually spectacular stepwells in the world. Situated in the town of Patan in Gujarat, it tells the story of an old capital that stood here 1000 years ago. To catch a glimpse of it, you can also look at the 100-rupee note issued in 2018.

Patan, then known as ‘Anahilavada’, was the capital of the Solanki (Chalukya) dynasty that ruled parts of what is now Gujarat and Rajasthan in North-Western India, between the 10th and 13th century CE. Remarkable economic and cultural progress was made under the Solanki rulers and traces of those glory days can be found in the monuments they built. These include the temples at Somnath and Modhera, reservoirs such as the Sahasraliṅga Talav and the stepwell of Ran-ki-Vav (‘Queen’s Stepwell’) at Patan. 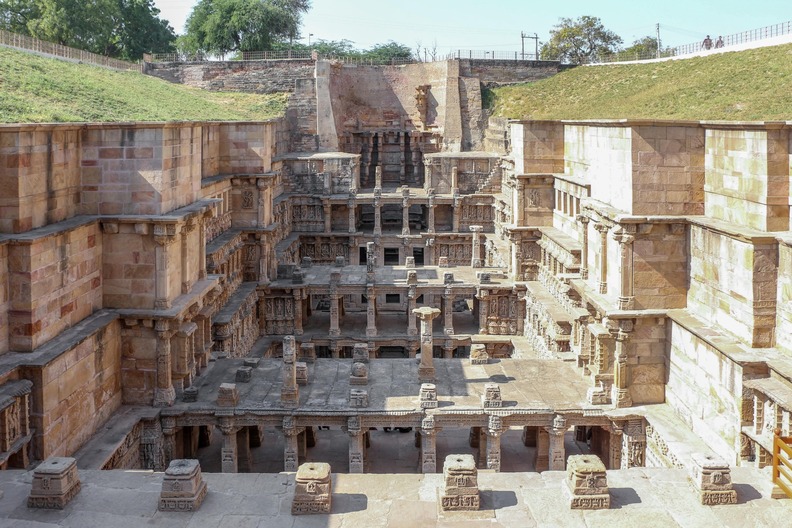 The 14th-century Jain scholar Merutunga in his Sanskrit text Prabandha Chintamani writes that the Ran-ki-Vav stepwell was built by Queen Udayamati, daughter of Navaghana Khengara, in 1064 CE. Queen Udayamati was the wife of Solanki King Bhima I and is believed to have commissioned the vav to commemorate his death.

Ran-ki-Vav, 65 metres long and seven storeys deep, is one of the largest stepwells in the world. It was situated close to the Saraswati River, which flooded it and silted it up when it changed its course. Interestingly, lying buried underground helped Ran-ki-Vav escape the wrath of marauding armies. It was brought to light only in the 1980s when the Archaeological Survey of India excavated it, removed all the silt, realigned its walls and reset its sculptures. However, of the seven levels, the first two were ruined by nature and also by man, as the stones and were used to build another vav nearby.

The sculptural wealth of the vav | Wikimedia Commons

Archaeologist Dr Kirit Mankodi, who has done extensive work here, says, “The sheer scale of the stepwell is remarkable in terms of size, profusion of sculpture and quality of workmanship.”

As you descend the steps of the vav, you notice that there is not an inch left of stone without some form of ornamentation. The well was built and sculpted at the peak of Solanki craftsmanship, and even in semi-ruined state, there are over 400 principal sculptures and 1,000 minor ones, which combine religious, mythological and secular imagery. 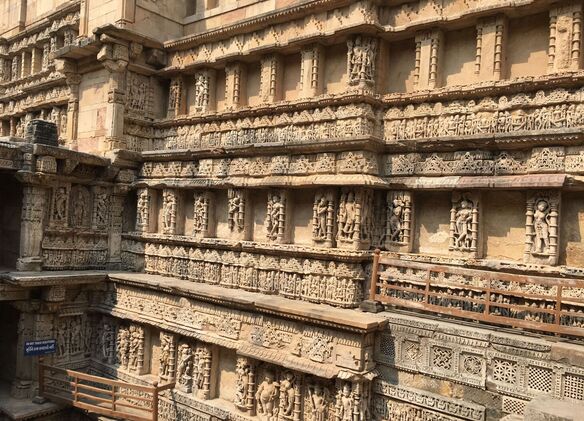 The northern wall of the vav | Author

These sculptures are broadly of two kinds – one, the main deities in niches; and two, figures such as apsaras in the regions of the four directions with digpalas carved on the upright posts, which alternate with the niches.

There are two dominant figures in the carvings, one of them is Lord Vishnu. Given that Vishnu (also called Narayana – the one who rests on celestial water) is closely associated with cosmic water, it was common for vavs like this one to have his figure carved on them. He is depicted in all his ten avatars and 24 forms (Chaturvimshati Murtis). The central niche has a depiction of Vishnu sleeping on his sheshanaag.

Another dominant figure is Goddes Parvati. She depicted performing penance for Shiva, which symbolises a wife’s devotion to her husband and her desire to be reunited with him in all future incarnations. This probably mirrored the feelings of Queen Udayamati in her act of building this vav.

Sculpture of Kalki,  a women playing with a monkey and Durga Mahishasurmardini | Wikimedia Commons

Other notable deity-sculptures include Brahma with his consort Saraswati and the hamsa bird; Uma-Maheshwara; Durga Mahishasurmardini killing the buffalo demon; Ganesh with a cobra crawling over his stomach and his consort fondling his trunk; Kubera with his nidhis (treasures); Maha-Lakshmi seated on a lotus; Chamunda wearing animal skin and human-bone jewellery; a 22-armed dancing Bhairava; Gauri standing in meditation; Hanuman in a hero’s posture trampling a demon; and Narasimha in his duel with Hiranyakashyap. There are images of Navagraha (nine planets) as well.

There are also a large number of sculptures portraying women (apsaras, nagakanyas and yoginis) in everyday life, indulging in different activities like taking care of a child, applying make-up, reading a book, dancing, writing a letter, playfully striking mischievous monkeys. These women are adorned with beautiful jewellery, like bangles, earrings, necklaces, waist girdles, anklets as well as with elegant clothes and well-combed hair. Sometimes, they also wear footwear. There are a variety of expressions and emotions depicted, from devotional to erotic. It wouldn’t be wrong to say that this stepwell, built by a woman, is a celebration of all women.

A particularly beautiful sculpture is that of Nayika Karpuramanjari (camphor spray). She is represented as a young maiden coming out of the bath with wet hair and a bird catching droplets of water falling from her hair as if they are pearls.

This stepwell once had 292 pillars, of which 226 remain. Some are intact while others only partially preserved. Sculptures of animals such as horses, elephants and lions decorate these pillars and basement moldings. 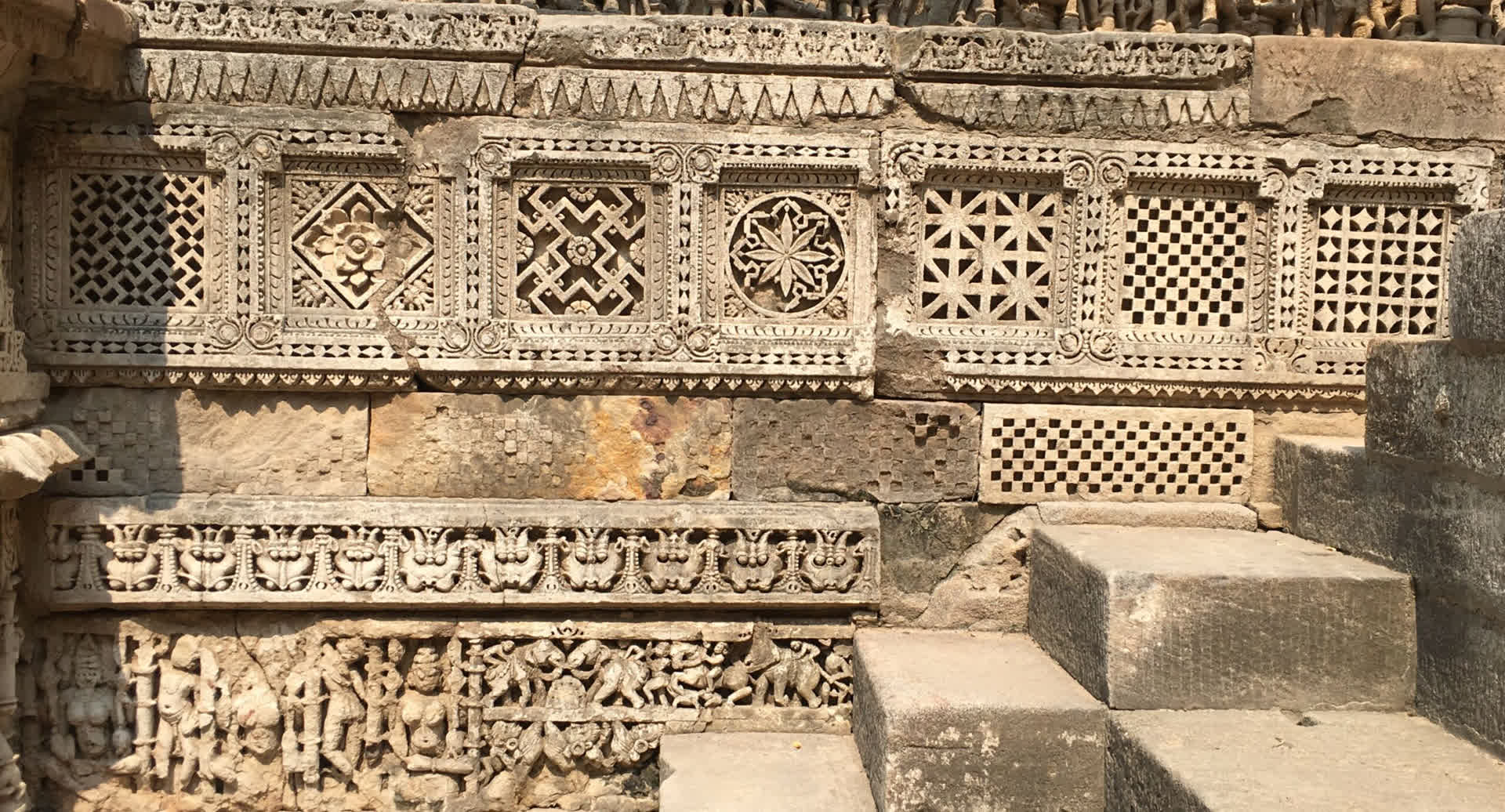 The most fascinating panels, at the entrance to the vav, display geometric lattice patterns and designs. These are similar to the designs on the local textiles woven in Patan – the Patola. This traditional weave and its saris also flourished under the patronage of the Solanki rulers.

The seven storeys lead to a well, which is on the westernmost end of the vav. It is about 30 metres deep and 10 metres wide. There is a masonry tank attached to the well to receive its surplus water. 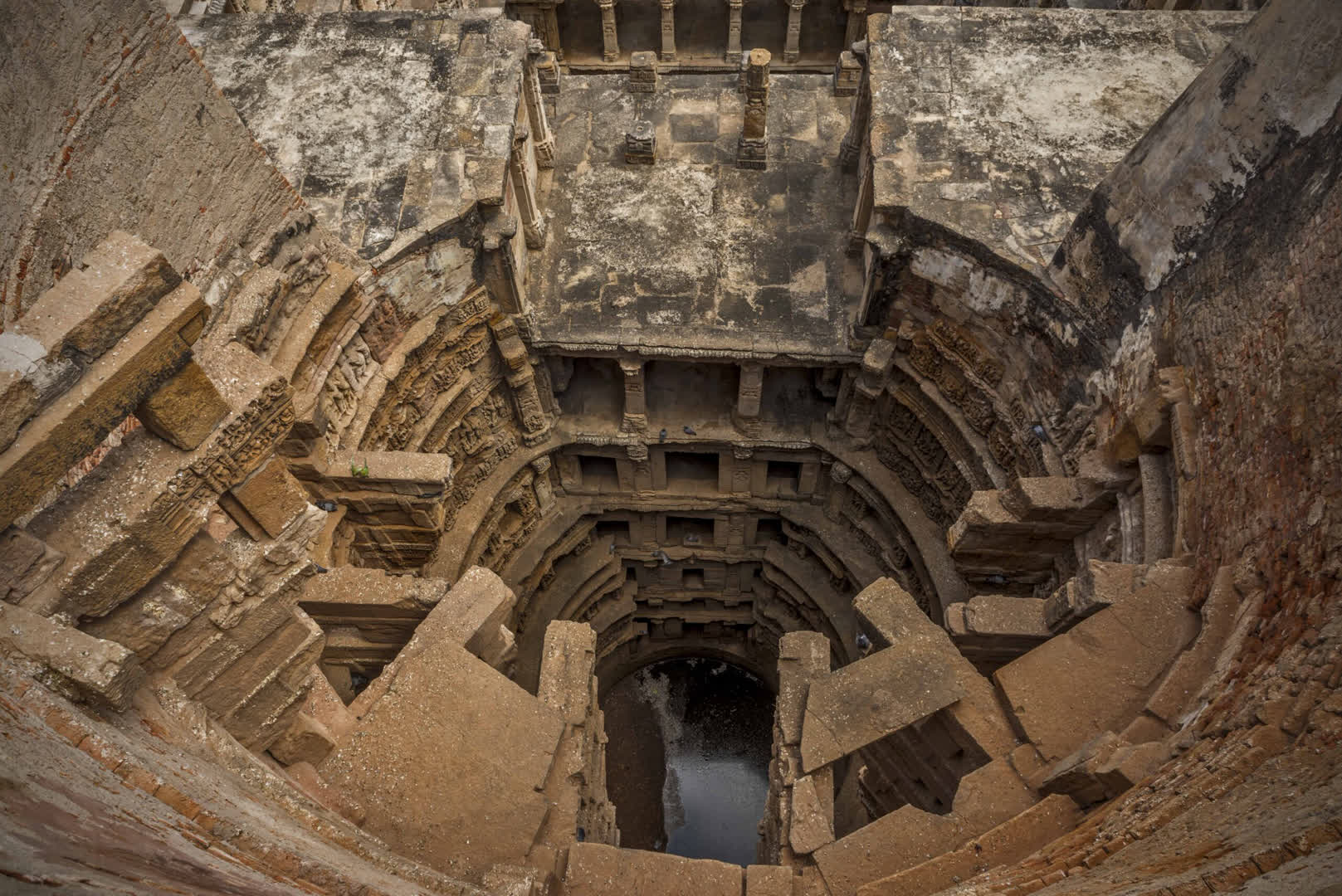 The well at the westernmost end of the vav | Gujarat Tourism

Ran-ki-Vav, apart from being an architectural wonder, was also a subterranean water-harvesting and storage system during heavy rains. It replenished the groundwater and provided the much-needed resource during the dry months. The vav sometimes also turned into a significant social space for communities, providing a cool oasis in the merciless Indian heat.

Ran-ki-Vav, with its sculptural wealth and complex construction techniques, found a place on the UNESCO World Heritage List in 2014. Not more than 3 hours drive away from Ahmedabad, this monument really transports you to a different era.

How Varaha Rescued The Earth