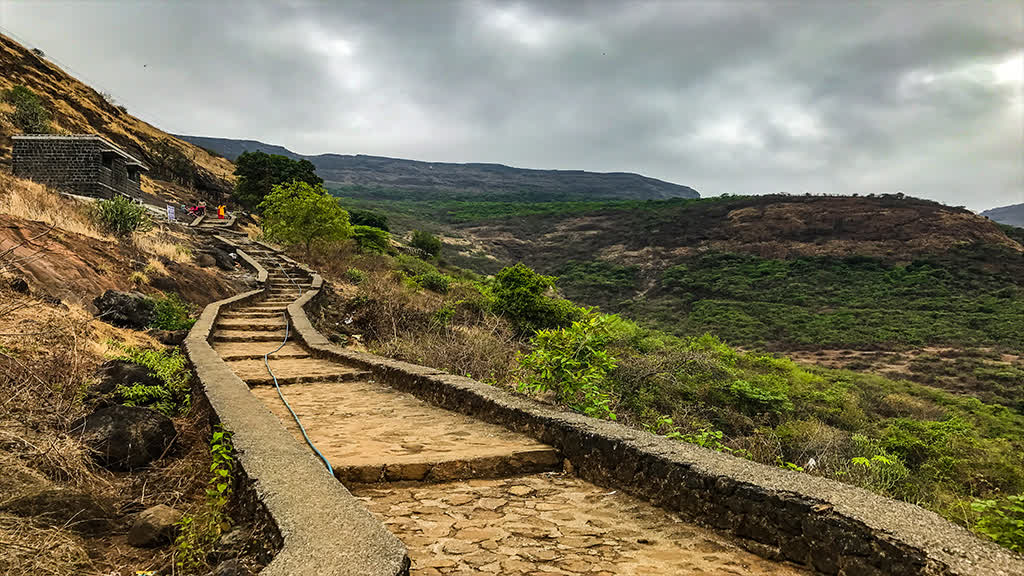 Bhaja Caves: Along the Trade Route

As hundreds of people make their way up and down the Mumbai – Pune Expressway each day, little do they realise that they are travelling along what was once an ancient trade route, used by travelers 2000 years ago! This is the Bhor Ghat, a strategic mountain pass that connected the Deccan to the ports on the Konkan coast. The route was used by merchants and caravans for hundreds of years and that is why you will also find a cluster of rock cut caves all along the way. The Volcanic Basalt rock of the Deccan Traps, were ideal ground for Buddhist, Jain and even Shaivite caves that you see all the way from Ajanta and Ellora in the North to Elephanta, an island just off Mumbai.

Commerce and religion went hand in hand in ancient India. Traders were the greatest patrons of Buddhist and Jain temples and monasteries. It is not surprising then that just 3 kms off the old trade route, now the Expressway, near Lonavala are the Bhaja caves. These are a group of 22 rock cut caves that date back to the 2nd Century BCE. They are among the oldest caves in Western India and predate the famous Kanheri caves in Mumbai. The Bhaja caves however, can’t be seen in isolation. In the surrounding area there are others – at Karle, Bhedse and Kondhane, all of which formed a network of Buddhist cave-monasteries extending from Nashik and Junnar all the way to Kanheri, near the Mumbai coast. So why were they built here? 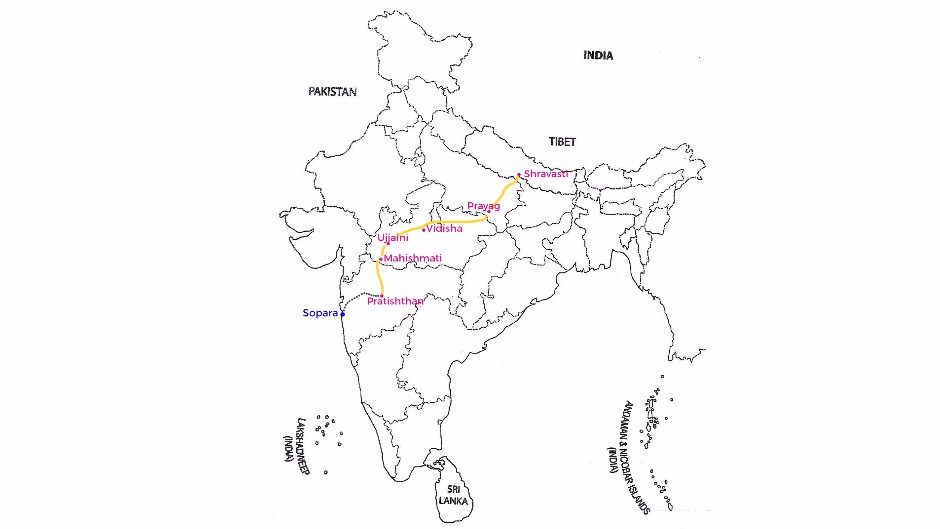 Earlier, it was believed that these were remote monk retreats where the Buddhist monks isolated themselves from the wider world. But it was noted historian DD Kosambi, who through his research brought to light the fact that the cave complexes were always located along trade routes. This is because their chief patrons were the merchants who moved along these routes, off shoots of the Dakshinapath, (ancient trade route connecting north and south India), to the coastal ports like Sopara.

But why did the merchants patronize these monasteries? In those days, traveling across the trade routes meant weaving your way through dangerous forests and mountains. There was danger of being attacked by wild animals and dacoits and the merchants believed that prayers of the monks protected them and their caravans. As a result, these merchants paid for the construction and upkeep of these cave-monasteries.

The wooden ceiling of Chaityagriha | Harsunit

The most distinguishing feature of the Bhaja caves is its unique Chaityagriha (prayer hall). It has 27 pillars around the hall with wooden beams fixed on the ceiling. What is most fascinating and almost unbelievable is that the beams on the ceiling are the original ones which the monks had installed 2200 years ago! This woodwork has survived for thousands of years and seen only minor conservation work in recent years. This must be among the oldest surviving woodwork in Western India.

A view of rock-cut caves at Bhaja  | Harsunit

Apart from the Chaityagriha, the entire Bhaja complex has simple rock-cut Viharas (living quarters) and water cisterns. Living high up in the hills meant that access to fresh water was very important for monks. As a result, most of the Buddhist cave-monasteries in the region have a complex system of rainwater harvesting and water management, which can even be seen at Kanheri caves in Mumbai. 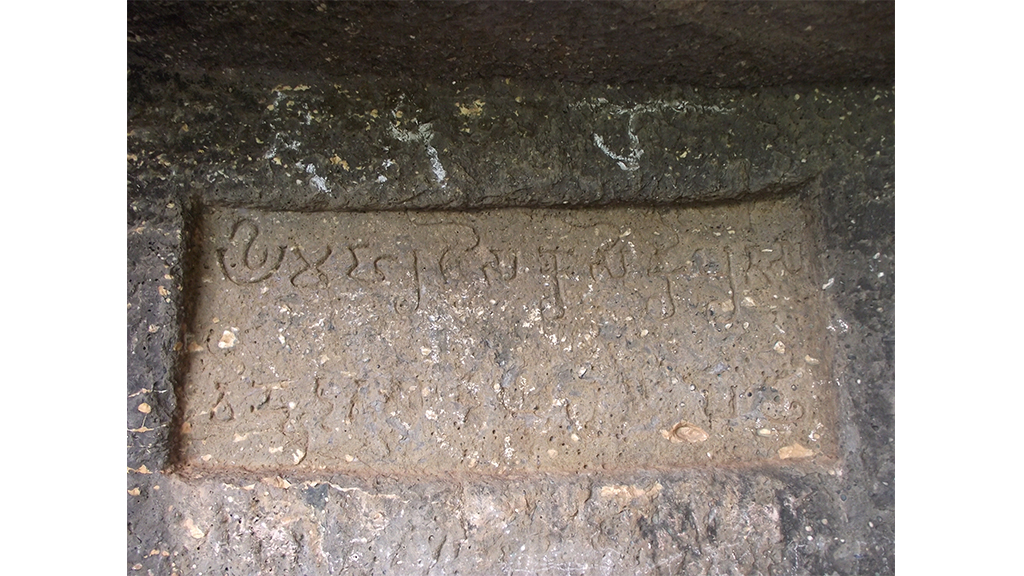 At the Bhaja caves you will also find inscriptions of donors who patronised these monasteries.

A Brahmi inscription mentions donations by Maharathi Kosikiputa Vihnudata for construction of a water tank. We don’t know who he was and where he was from, though the name ‘Maharathi’ is intriguing. Around 2nd and 1st century BCE, large parts of Maharashtra were ruled by group of fierce warlords called Maharathis or ‘ Great Charioteers’ . Was Kosikiputa Vihnudata a local warlord, then? We can’t be certain.

At Kanheri, there are members of Satavahana royal family named as donors. At Karla caves, located near Bhaja, a large number of donors were Yavanas (Central Asians) and there are also a few Greeks. 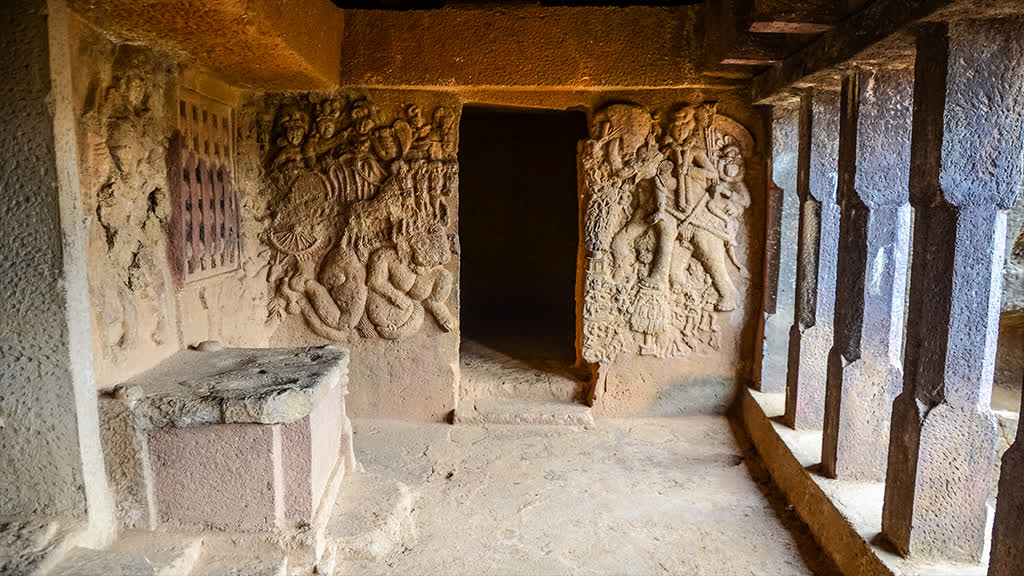 In cave number 18 at Bhaja, are two very interesting and intriguing sculptural reliefs One depicts a person attended by two women, driving a chariot with four horses, and to the left, is a person riding an elephant with attendants carrying a banner and spear. Scholars differ on who these figures represent. Some claim it is Surya (Sun God) and others claim it is Indra (God of Rain and Thunder). Few historians even claim these could be characters from the Jataka tales. Deepening the mystery is the fact that these figures show distinct Central Asian features! 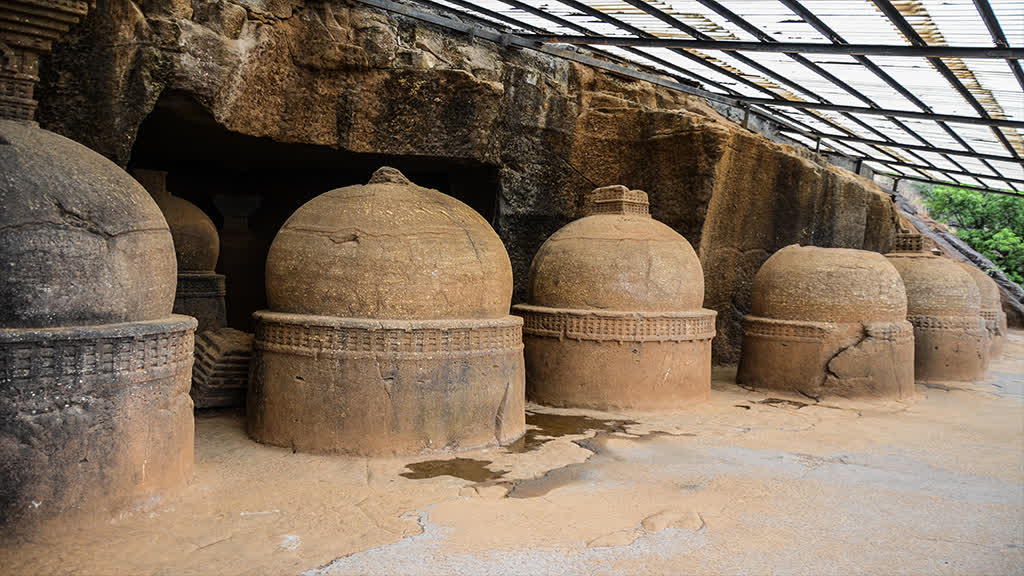 A cluster of stupas | Harsunit

At the end of the Bhaja cave complex there is a small cluster of 14 rock-cut stupas that contain relics of teachers who lived and died here. These stupas were built as memorials for them. 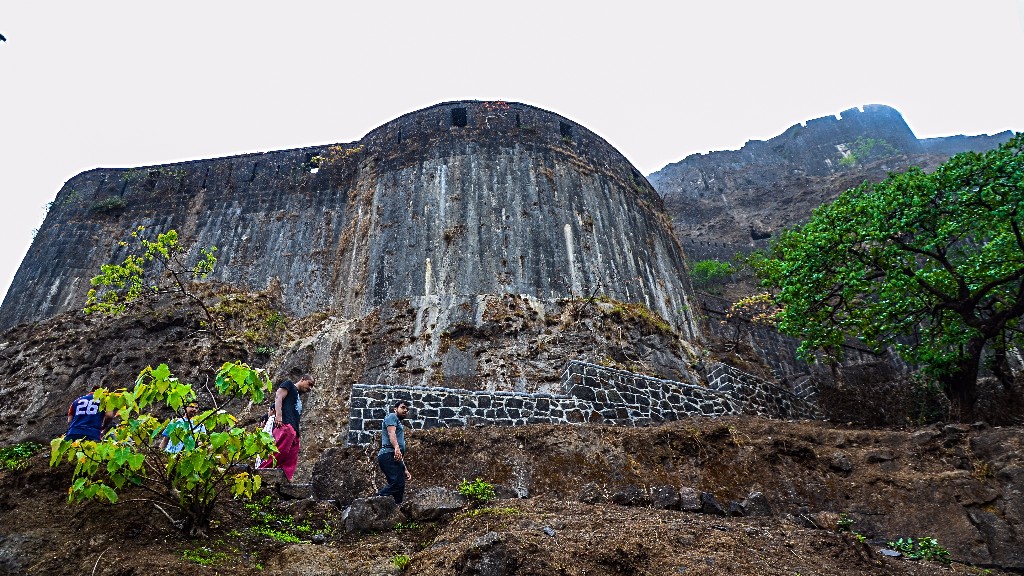 Towering above Bhaja caves is the Lohagad Fort, built during Satavahana times, to protect the strategic pass to the coast. The monks living in Bhaja caves would have looked up to the garrison in the fort for protection.

Today, with the advent of modernity, the cave complexes and the great forts all have become weekend getaways for people seeking to escape the bustle of the metropolis. 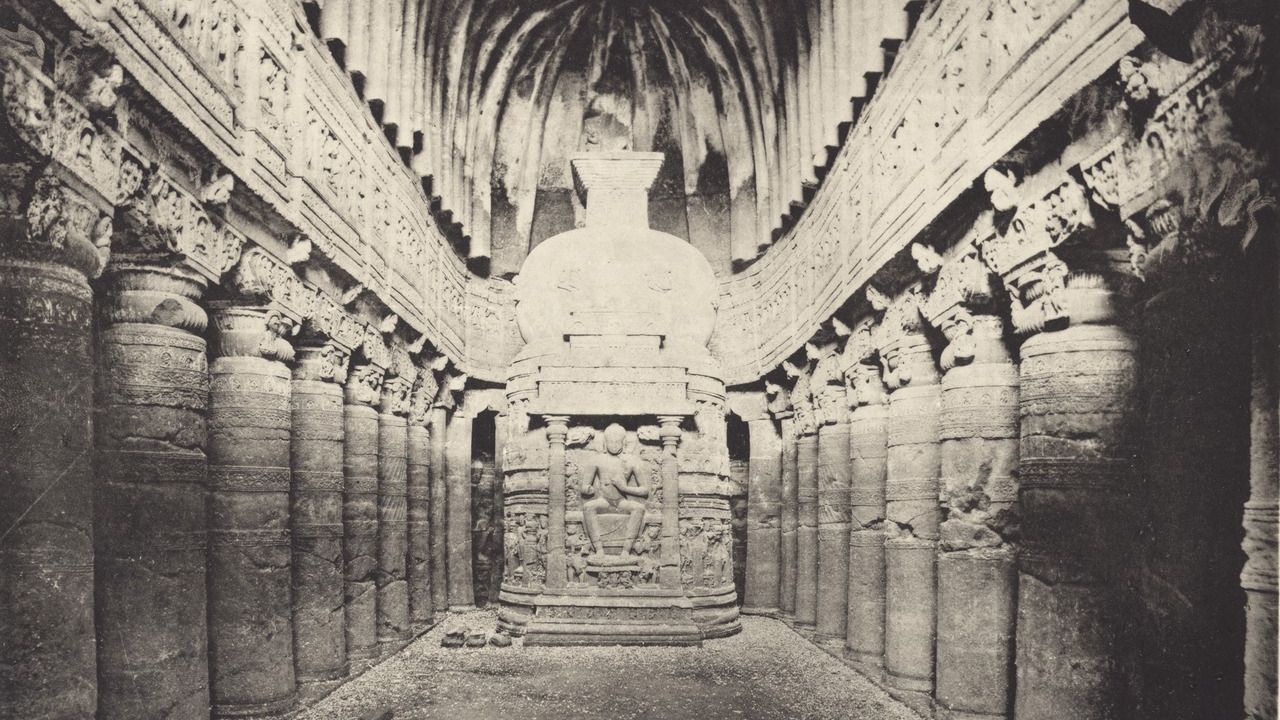 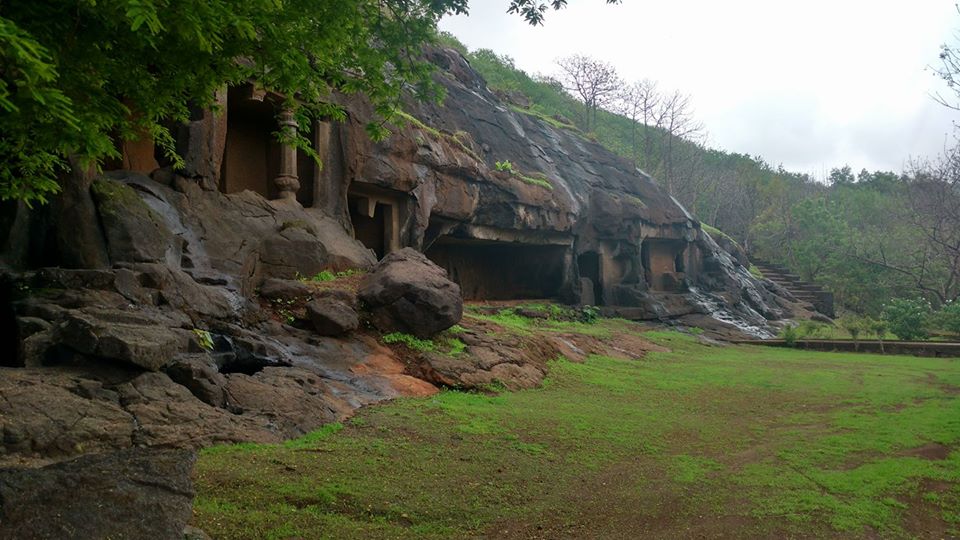 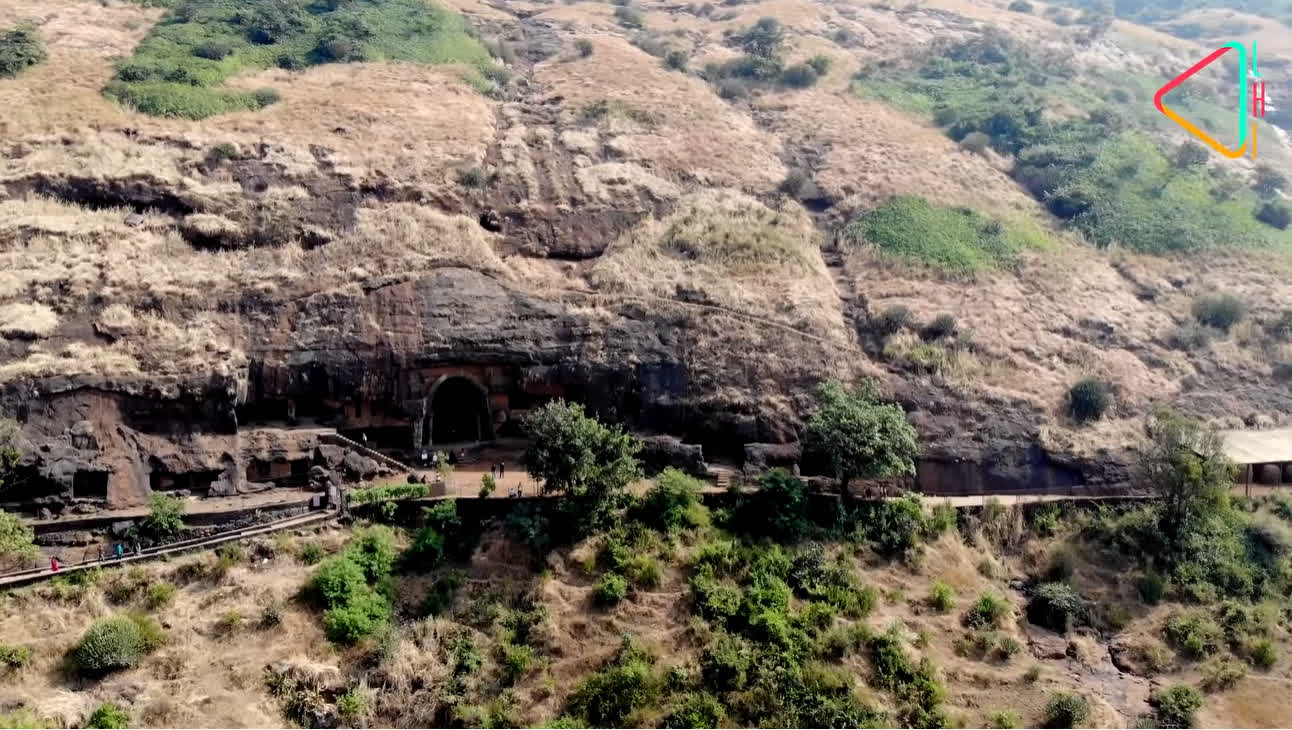 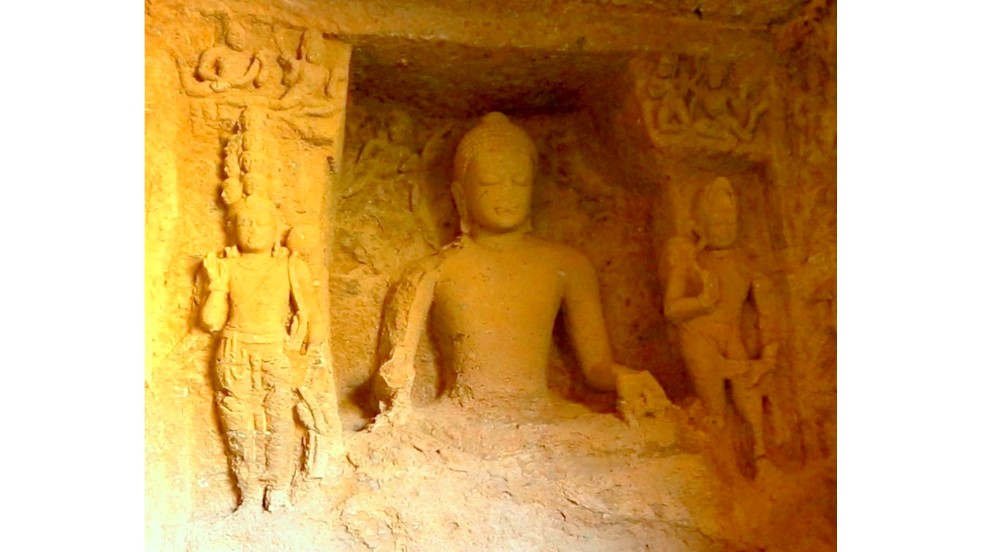 From Kanheri to the World 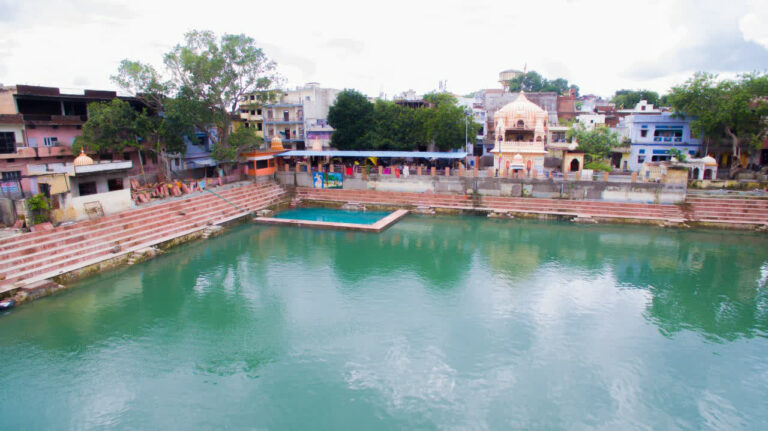 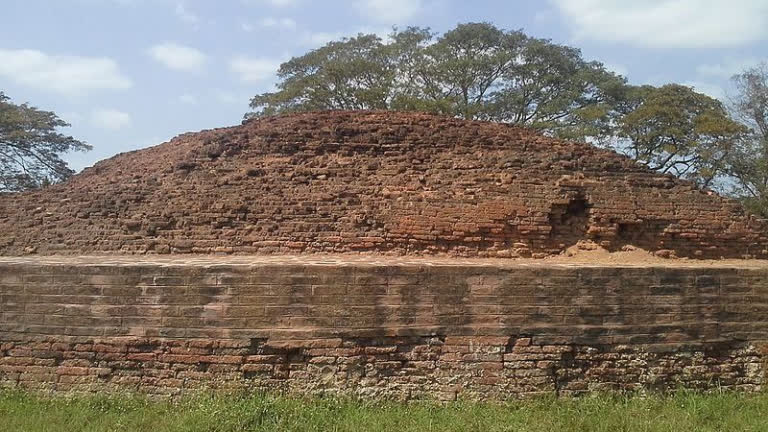