As you turn into a narrow lane off Baghbazar Street, in North Kolkata,  you could easily miss the imposing mansion standing proudly at the end of it. Lurking behind thick foliage, shrubs and trees this is a towering piece of Bengal’s history. This is Basu Bati, at 65/2 Baghbazar Street.

The sprawling estate with its distinct regal air once housed one of the first families of Kolkata – that of brothers Nanda Lal and Pasupati Basu. Mention these names and the locals speak of them in hushed tones, with awe and respect. Some believe they were like local princes during the British era; others say they were zamindars and “big patrons of the freedom movement”.

So, who really were the Basus?

According to family records, Nanda Lal Basu and Pasupati Basu (later called Nanda Lal Bose and Pasupati Bose) and their older brother, Mahendra Lal, were 24th generation descendants of the legendary Dasarat Basu (born between 1035 and 1065 CE) – the first man recorded to have had the surname ‘Basu’, now a common Bengali surname . They were the sons of Madhav Chandra Basu and grandsons of Jagat Chandra Basu, of the renowned Basu family of Kantapukur in Shyambazar, North Kolkata.

It is said, although it cannot be confirmed, that another iconic descendent of Dasarat Basu was Netaji Subhas Chandra Bose.

It is believed that around 1874, an uncle of the three men passed away, leaving Mahendra Lal to inherit the former’s title of ‘zamindar’ of Gaya (even though he had kept Kolkata as his base). Using the income that came with the title, Mahendra Lal acquired a large plot in Baghbazar and started constructing Basu Bati in 1876. 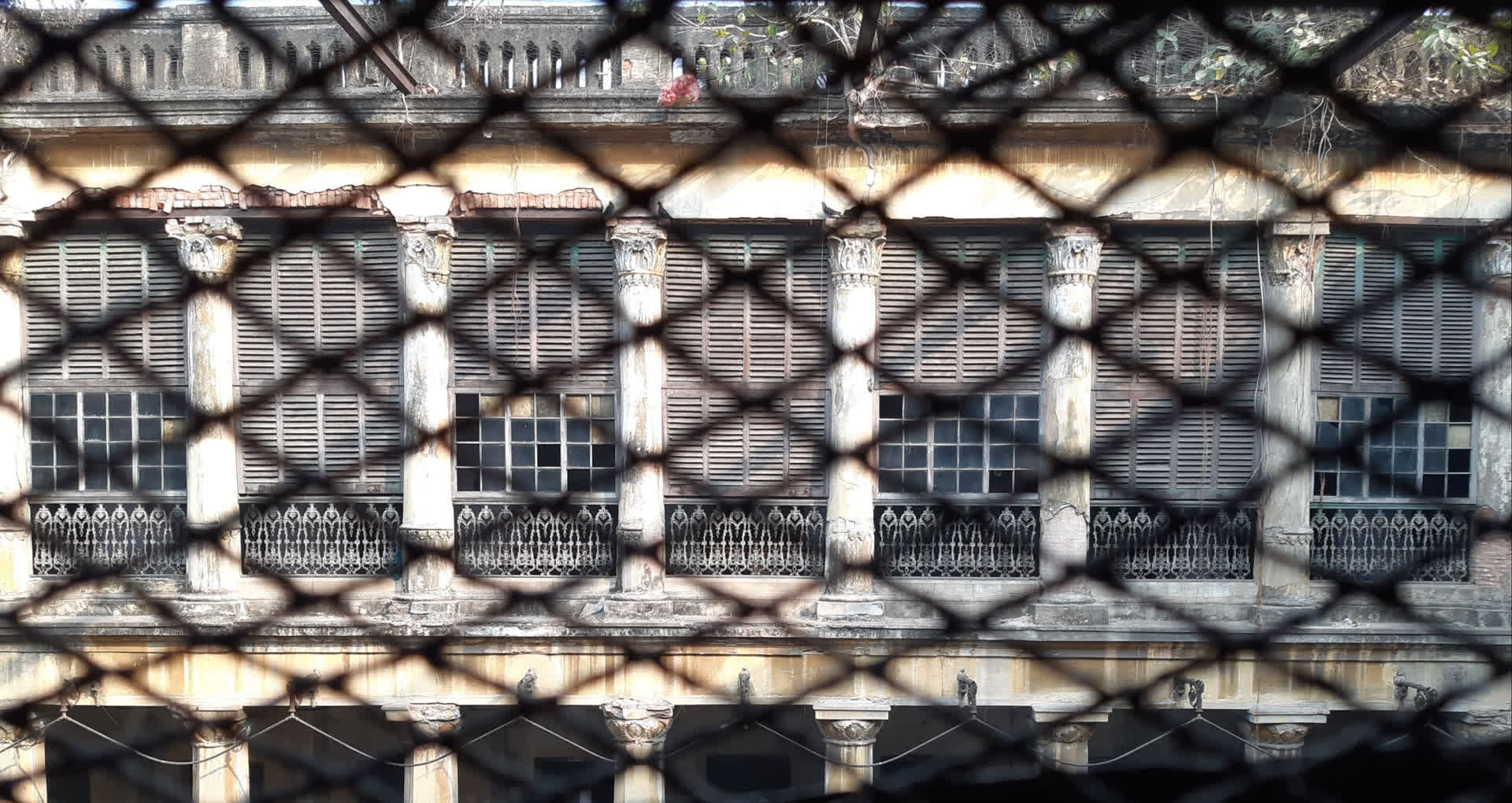 Basu Bati stands out for its unique architecture | Rajaditya Ghosh
Support Live History India
If you like Live History India`s work, do consider extending support to us. No contribution is too small and it will only take a minute. We thank you for pitching in.
Donate
*Terms and Conditions

Stand at the gates of Basu Bati and it’s like stepping back in time. There is not a soul in sight and the monumental stone edifice, its façade fronted by massive fluted columns with ornate capitals, seems to invite you in. The architecture is unique and it isn’t colonial.

This wasn’t a mansion made to appease British officers; it was an act of rebellion, of sorts.

Around this time, Kolkata had been divided into the ‘White Town’, where British officers and other Europeans lived, and the ‘Black Town’, where the locals lived. To avoid being counted as residents of the ‘inferior’ Black Town, many zamindari families in the Black Town had designed or remodelled their homes according to the European style of architecture prevalent at the time. They also hoped to curry favour with the British via this unspoken pledge of allegiance.

In contrast, Basu Bati’s architecture is a blend of Bengali and Islamic influences, fashioned by architect Nilmani Mitra in 1876.

Mitra, was said to be the first Bengali to hold a civil engineering degree.

But why fashion their family estate as an elaborate act of rebellion? The answer lies in the Basus’ staunch nationalist stand and fiery contribution to the freedom movement.

When Lord Curzon announced the infamous ‘Partition of Bengal’ in 1905, rebellion broke out in every street in Bengal – then considered the nerve centre of Indian radicalism. A procession led by none other than Rabindranath Tagore was initiated at the Federation Hall in Kolkata and ended at Basu Bati on 16th October 1905. Thereafter, at Tagore instance, a mass ‘rakhi-tying’ ceremony between Hindus and Muslims, took place in Basu Bati’s sprawling thakurdalan, a courtyard-cum-podium whose primary purpose was to host the annual, five-day-long Durga Puja. This ceremony was meant to mark the unity between Hindus and Muslims, and to protest against the British partition of Bengal on religious lines

In August the same year, it came to public attention that the British were spiriting away India’s resources and forcing Indians to buy British goods, and once again, Basu Bati’s thakurdalan was chosen as the venue of a meeting that followed. A national fund was then set up to help revive Indian-based industry, marking the beginning of the Swadeshi Movement.

Surendranath Banerjee, a pioneer of the freedom movement, made the official call for the movement in the thakurdalan of Basu Bati.

In 1906, an exhibition of khadi or homespun cloth, a direct challenge to the produce of the mills of Lancashire, was held in Bengal for the first time – and this historic event too was held in Basu Bati.

Sadly, like many other grand structures from colonial Bengal, Basu Bati has been difficult to maintain.

Remains of an intricately-carved sculpture at Basu Bati | Rajaditya Ghosh

The Decline of Basu Bati

Until the call for Independence in 1947, the main resident of the estate was Ananthnath Basu, the youngest son from Pasupati Nath Basu’s second marriage. Ananthnath was married to the daughter of Nirmal Chandra Chunder, a prominent member of the Indian National Congress in Bengal, who was steeped in debt post-Independence. Sources claim that Ananthnath tried to repay his father-in-law’s debt by selling his half of the Basu Bati estate.

Ananthnath and his descendants decided to relocate, while two of Nanda Lal’s sons too – Bipin Behari Basu and Binod Behari Basu – also deciding to move out.

After Alok passed away in 2005, Amit took control of the estate but had a hard time finding resources to maintain an estate as old and unique as Basu Bati. After discussing it with family, he sold the property to Ambuja Realty in 2007 and there were plan to turn it into a heritage hotel. However, considering that the state government held the reins to the other half of the estate, there was a roadblock to turning it into a hotel.

Basu Bati faces south (a sign of good luck according to Bengalis) and spans two storeys across five bays. The central bay contains eight columns and it is through the central bay that one enters the thakurdalan. The thakurdalan is flanked by rooms on its southern, eastern and western sides and also comprises massive balconies. 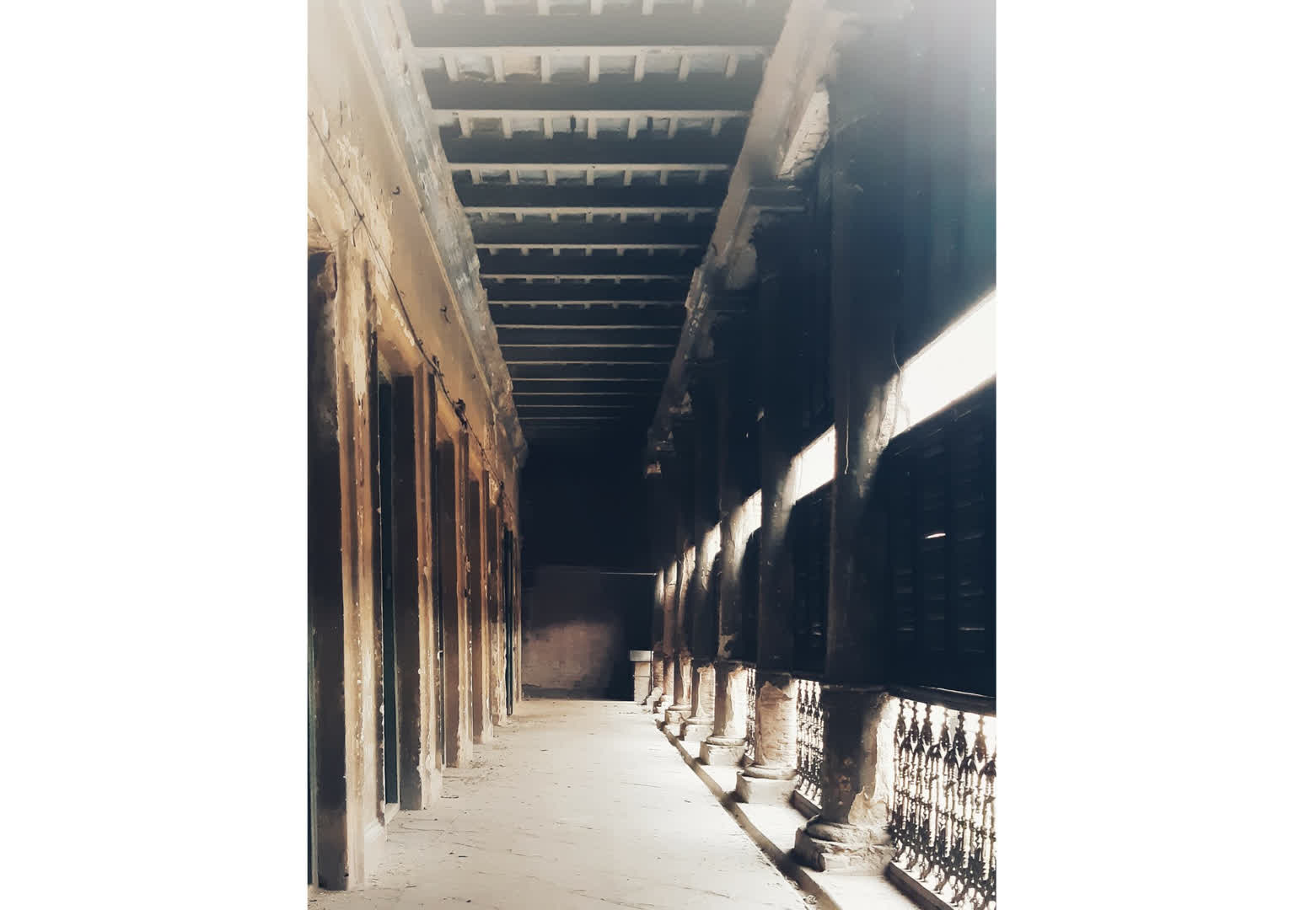 The northern side of the thakurdalan, however, is an extension of the unique structure, leading all the way up to the second storey. While the columns of Basu Bati contain Hindu-style capitals with lotus motifs in stucco, all the arches in the mansion are scalloped in Islamic style.

The estate’s unique layout also lent itself to traditional designs prevalent at the time. It made provisions for a baithak khana (a drawing room where guests were entertained), an outer-house or bahir mahal as well as an inner-house or andar mahal. The andar mahal was designed for the ladies of the household, following the rigid principles of the purdah system in place then, and only female members of the household and close male relatives were permitted in these quarters. 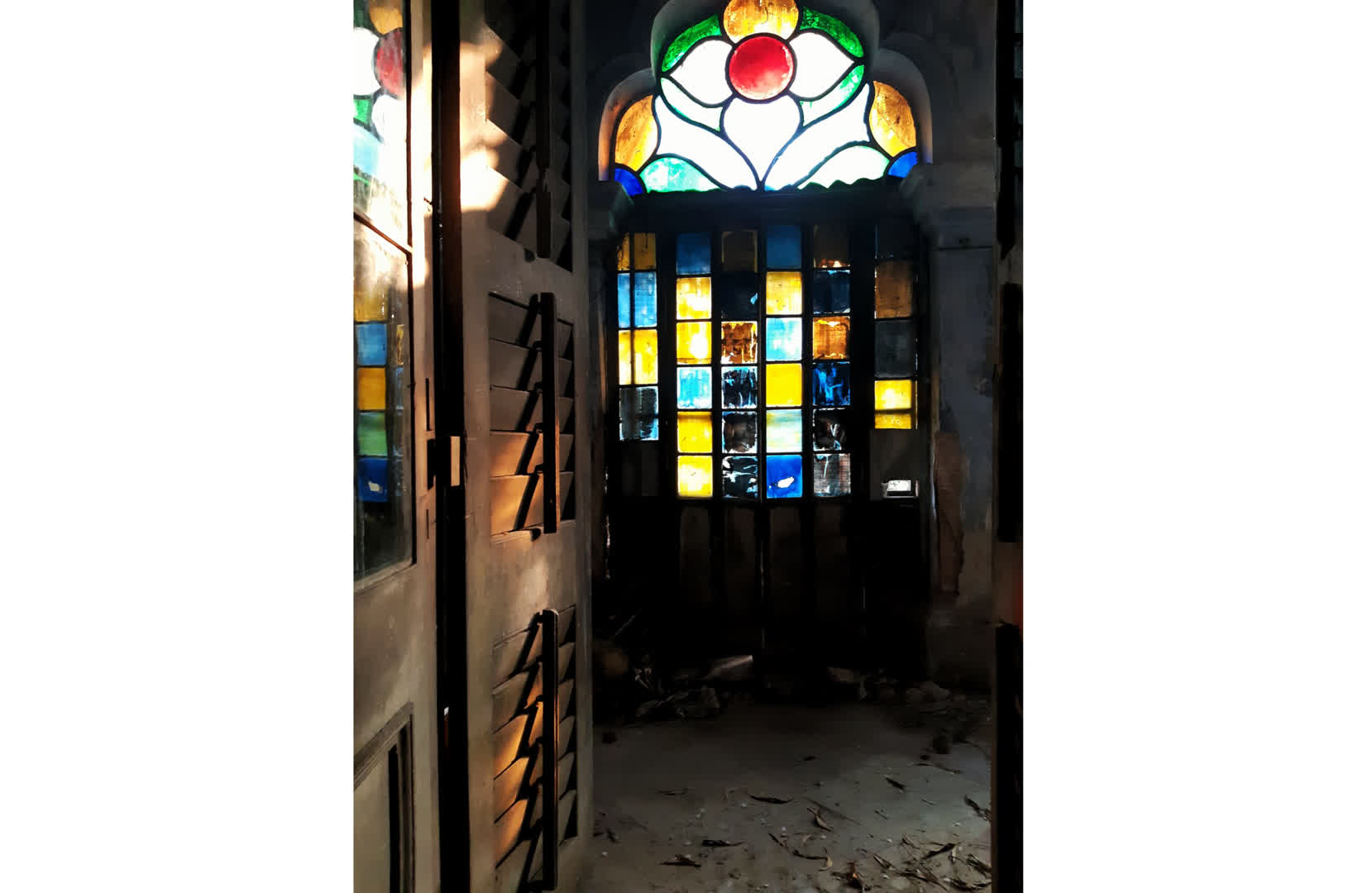 However, perhaps the most striking part of Basu Bati is its thakurdalan, a signature feature of affluent Bengali households at the time. A large courtyard or ‘altar’ occupying the centre of the building, it is usually ringed with beautifully sculpted pillars.

If the pillars of the Basu Bati thakurdalan could talk, they’d be able to tell you about the visit of the last King of Awadh, Nawab Wajid Ali Shah, who back then was in exile in Garden Reach in Kolkata. The Nawab visited Basu Bati to watch a play by the father of Bengali theatre, Girish Ghosh, called The Victory of the Pandavas.

Nawab Wajid Ali Shah, who many claim was perhaps a better poet and artist than a leader, spent a considerable amount of time in Kolkata, which was to be his pit-stop on his way to England to appeal to the Queen of England to not annex his kingdom. While there are no records of the Nawab’s connection to the Basu family, he had probably heard of the many plays being hosted at Basu Bati and expressed his desire to attend them.

Nanda Lal and Pasupati Basu were both great patrons of the arts, and along with their keen interest in theatre, they also threw the gates open for iconic painters of that generation. As the story goes, the brothers decorated the corridors of their estate with paintings by Bamapada Banerjee, a famous artist from 19th century Bengal, who depicted scenes from Hindu mythology. Celebrated painter Jamini Roy (1887-1972) was also said to pay regular visits to the estate.

The spectacular collection of paintings in Basu Bati ranged from those in Kalighat Pat style to the Tanjore style.

Nanda Lal was said to be a disciple of religious reformer Ramakrishna Paramhansa (1836-1886), who is said to have visited Basu Bati and praised the collection. The thakurdalan was the centre-space for any kind of official celebration as well – such as the annual Durga Puja celebrations, whose stories still ring out in the premises today.

Basu Bati will always hold memories of the many generations of Basus who lived here, its pillars and corridors forever holding the touch of the most renowned artists, its gates remembering the visits of kings and poets. And its thakurdalan…well, that’s where history was made.

Sanjana Ray is a journalist by profession, history geek by passion. She spends her time offering anecdotes on Indian history to anyone who will listen.