Amritsar is known for its magnificent monuments like the Golden Temple, Jallianwala Bagh, Durgiana Temple and Gobindgarh Fort. But dig a little deeper, especially inside the walled city, and you will find a secret world beneath your feet. It’s a labyrinth of passages and tunnels, which played a vital role during the city’s bloody and battle-scarred past.

For centuries, Amritsar was practically a war zone, whether during the Sikh-Mughal conflicts of the 17th century, the Afghan invasion in the early 18th century, or when the misls were battling each other in the latter part of the same century. Thus, building fortifications, fortified neighbourhoods – and secret tunnels – was a dire necessity, to save both Amritsar itself and the interests of the religious and political entities that ruled the city.

These historic eras from Amritsar’s past have been showing up every now and then in recent times, when the remnants of the old tunnels – some of them more than 400 years old are uncovered by construction crews and civic workers.

According to the book Tawarikh Lahore-Amritsar (2005) by historian Surinder Kochhar, there are about two dozen of these tunnels that can be excavated, from Qila Lohgarh, Katra Bhagian, Katra Bhangian, Katra Ahluwalia and other old neighbourhoods in the city.

Here are some that have turned up in the last few years:

* In the early 1990s, construction crews discovered a secret tunnel beneath a historic haveli or mansion in Katra Bhagian, a neighbourhood in Amritsar. The municipal authorities claim they contacted the Archaeological Survey of India (ASI) but no one came. It wasn’t long before the tunnel, at least the section that ran through the construction site, was demolished and new homes were built where a piece of history once lay. 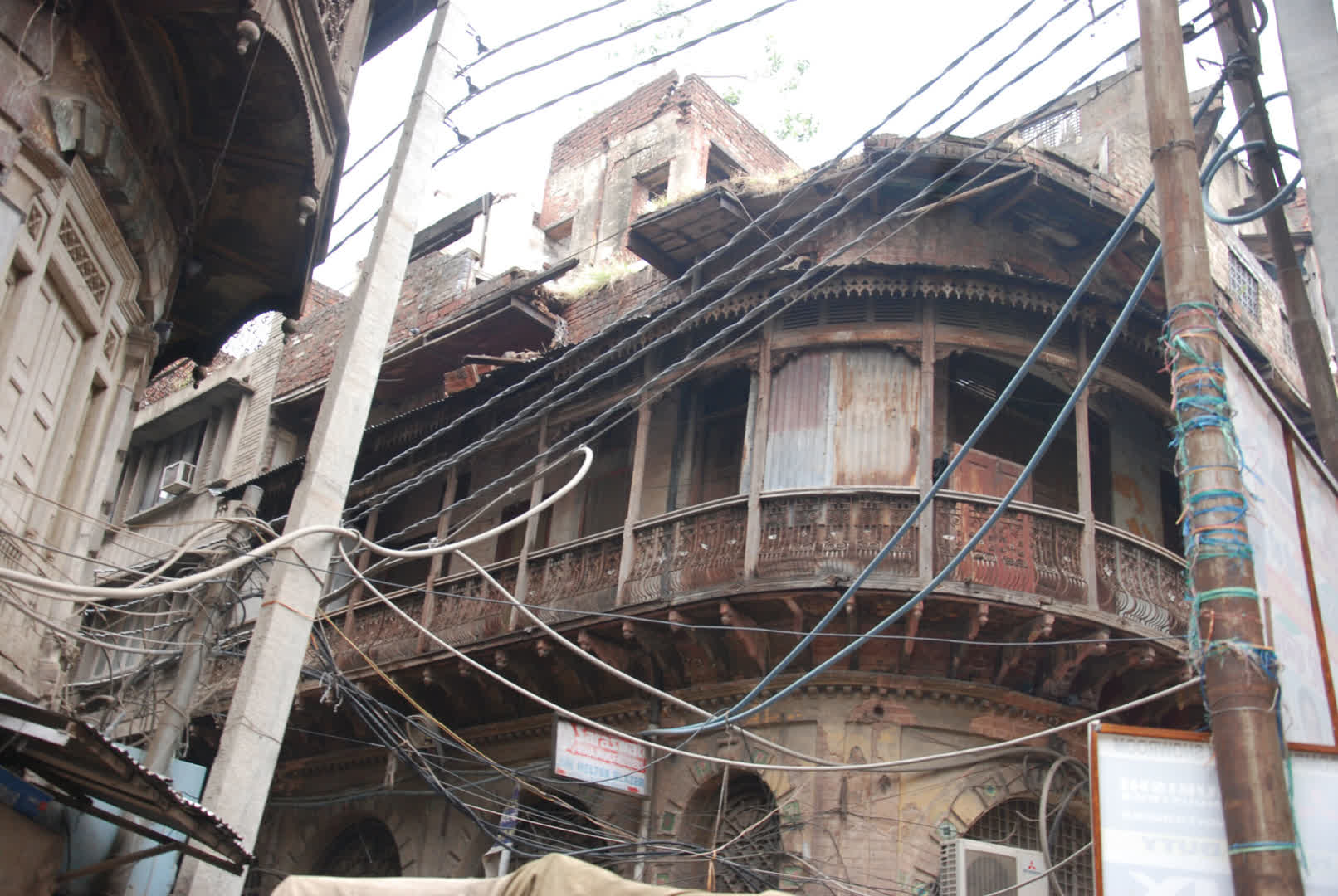 House in Katra Ahluwalia, adjoin the fort under which historical tunnel was excavated | Author
Support Live History India
If you like Live History India`s work, do consider extending support to us. No contribution is too small and it will only take a minute. We thank you for pitching in.
Donate
*Terms and Conditions

* A similar tunnel was uncovered in 2006, when a 200-year-old haveli was being razed in the Katra Ahluwalia neighbourhood in Amritsar. The tunnel was 5½ feet-wide and made of Nanakshahi bricks. It was positioned in the direction of Qila Ahluwalia, located nearby. Sadly, before the ASI could survey it, the tunnel was filled with cement and permanently closed. A slice of history was lost forever.

* A few years later, in 2011, another historic tunnel was discovered when the Municipal Corporation of Amritsar was laying sewage pipes in the city. They unearthed the tunnel near Gurdwara Lohgarh Sahib, which was originally built as a qila or a fort by the sixth Sikh Guru, Guru Hargobind, and was converted into a gurdwara of the same name.

The discovery of this tunnel was directly linked to the Sikh Guru and it became quite a sentimental issue but even that couldn’t save it. The tunnel was called an ‘old pipeline’ that had no historic value and was closed. Another historic relic was permanently erased.

Yet there was no disputing the historic value of this chance find. Its large size and design, and the use of traditional bricks in its construction suggested that the tunnel was indeed a historical treasure.

The story of this tunnel is especially interesting, built as it was for the protection of the sixth Sikh Guru, Guru Hargobind Sahib, during a time of great political upheaval in Punjab in the 17th century. After the fifth Guru, Guru Arjan Dev was executed by the Mughals in 1606, and his successor Guru Hargobind was arrested at Gwalior Fort in 1609, relations between the Sikhs and Mughals turned particularly hostile. Although Guru Hargobind was eventually released, relations failed to improve and even took a turn for the worse.

To protect the city of Amritsar from a possible Mughal attack, Guru Hargobind built a small fort called Lohgarh, 1 km from the Harmandir Sahib, the holiest shrine of the Sikhs, also called the Golden Temple. He also surrounded the fort with a strong wall. The Guru is believed to have also built a tunnel connecting the fort to his official residence nearby, called ‘Guru ka Mahal’, if he ever needed a quick escape route.

In 1628, Mughal Emperor Shah Jahan ordered his troops to attack the Sikhs and capture Lohgarh. This battle, popularly known as the ‘First Battle of Amritsar’, ended in a decisive victory for the Sikhs. Thankfully, Guru Hargobind did not need to use the tunnel he had built, and it lay concealed till municipal workers stumbled upon it centuries later, in 2011.

Interestingly, the tunnel was made of Lakhori bricks, which were widely used in Mughal times and during the period of the Sikh Gurus in Punjab. It was during the reign of Maharaja Ranjit Singh (1801 – 1839), founder of the Sikh Empire, that Nanakshahi bricks became popular.

The Lohgarh tunnel is only one in an entire labyrinth of tunnels in Amritsar that goes back to the era of the Misl Confederacy of the 18th century. This was a time when the Punjab region was divided into small sovereign states called misls. Although the Bhangi Misl was entrusted with the protection of Amritsar city, the Sri Harmandir Sahib was guarded by a handful of special misls including the Ramgarhia Misl and the Kanhaiya Misl. Each misl had a centre or a bunga in nearby Harmandir Sahib and greatly influenced the politics of the city.

These misls also established their own residential clusters known as katras in Amritsar and demarcated these respective neighbourhoods with walls. In time, each katra began to follow its own judicial and economic structure. Each one also had its own tax collection centre, which taxed the people of other katras who needed to pass through or enter another katra. Each katra was like a mini-city, with walls separating each one from the others.

Dilapated deori of Chhura Wala Bazar, a type of building where tax was extracted in a katra

All was not always well between these katras and intense rivalry marked their relations. Some katras forged alliances with others, to gang up against common rivals. They literally tunnelled their way around the politics of this neighbourhood rivalry, so that allies could connect with each other, underground, without ever setting foot in a rival’s territory!

So when construction workers discovered tunnels in Katra Bhagian and Katra Ahluwalia a few years ago, they were actually boring into the secret alliances of the misl era.

Another treasure from the misl era was a tunnel discovered in the early 1990s, beneath the historic haveli or mansion of Sardar Dyal Singh Majithia, renowned 19th-century banker, social reformer and founder of The Tribune newspaper. The haveli was situated in a small street called Kucha Dyal Singh in the Katra Bhagian neighbourhood.

The haveli was constructed by Dyal Singh’s father, Lehna Singh Majithia, one of the most trusted and scholarly generals of Maharaja Ranjit Singh. In dilapidated condition today, only a few portions of the original structure are still standing.

But the locality dates to a much older era, to which the tunnel belongs. The Katra Bhagian neighbourhood was established during the misl period by chiefs of the Kanhaiya misl including Amar Singh Bagga, Jai Singh and Haqiqat Singh, These chiefs built their havelis and a small fort in the katra.

To connect the mansions to each other and to their underground chambers, they built a series of tunnels. A few years ago, some of these tunnels were discovered when the old havelis here were being demolished to make way for new houses. Sadly, no heed was paid and the tunnels were closed forever.

Fort Gobindgarh under which the tunnels can be discovered | Author

The city’s underground passages played an important part during the Sikh Empire led by Maharaja Ranjit Singh. A rising star in the Sikh Confederacy, Ranjit Singh was only a teenager when he defeated Afghan ruler Zaman Shah Durrani twice, in 1797 and 1798. He then turned his attention to Lahore, which he seized from the Bhangi chiefs. After this victory, the young Maharaja-in-the-making set his sights on Amritsar, which was then ruled by the Bhangi misl. In 1802, when Ranjit Singh rode in with his troops to capture the city, he encountered stiff resistance from Mai Sukhan, the widow of the Sikh Bhangi ruler Gulab Singh Bhangi.

Although the city was ruled by her 12-year-old son Gurdit Singh Bhangi, it was she who held the reins as his guardian. But Mai Sukhan was also known for her military prowess and leadership. When Ranjit Singh first attacked the Bhangis at their Gujjar Singh Bhangi Qila (later rebuilt by Ranjit Singh as Gobindgarh Fort), Mai Sukhan knew it wouldn’t hold up for long as it was a mud fort.

So, along with her son and a few troops, she fled to another fort, Qila Jhanda Singh (popularly known as Qila Bhangian). But Ranjit Singh’s army soon surrounded that fort too, cutting off all escape routes. Or so they thought! Mai Sukhan escaped, probably using a network of secret tunnels which connected the forts, and finally made it from Qila Bhangian to Qila Lohgarh, before she finally emerged at the haveli of the Ramgarhia chiefs in Chowk Parag Das near the Sri Harmandir Sahib.

At the haveli, Mai Sukhan made a pact with Ranjit Singh – she handed over control of Amritsar to him and, in return, impressed by her bravery, the Maharaja bestowed on her a few jagirs or land grants.

Amritsar was now in Ranjit Singh’s control but he wasn’t fully satisfied. The Maharaja didn’t want the holy city to be divided among a small cluster of katras, who virtually hated each other. So he demolished the walls of all the katras and unified the city by building the ‘walled city or old city of Amritsar’ and unifying it with one common wall.

By now, the city’s secret passages had served their purpose and even the katra culture was changing. There was no need for clandestine meetings and escape routes any longer. Buried in our memory as the decades wore on, Amritsar’s tunnels have lain silent and locked in under its congested neighbourhoods. Since excavating and reopening them is quite impossible, the least we can do is preserve this buried treasure when it does occasionally surface from the depths of time.

On a rainy afternoon in August 1914, revolutionaries in Calcutta pulled off an arms heist that sent shock waves through the British administration. All it took was a bullock cart that ‘lost its way’. Catch the dramatic story of the ‘Rodda Arms Heist’ and its stellar cast of characters