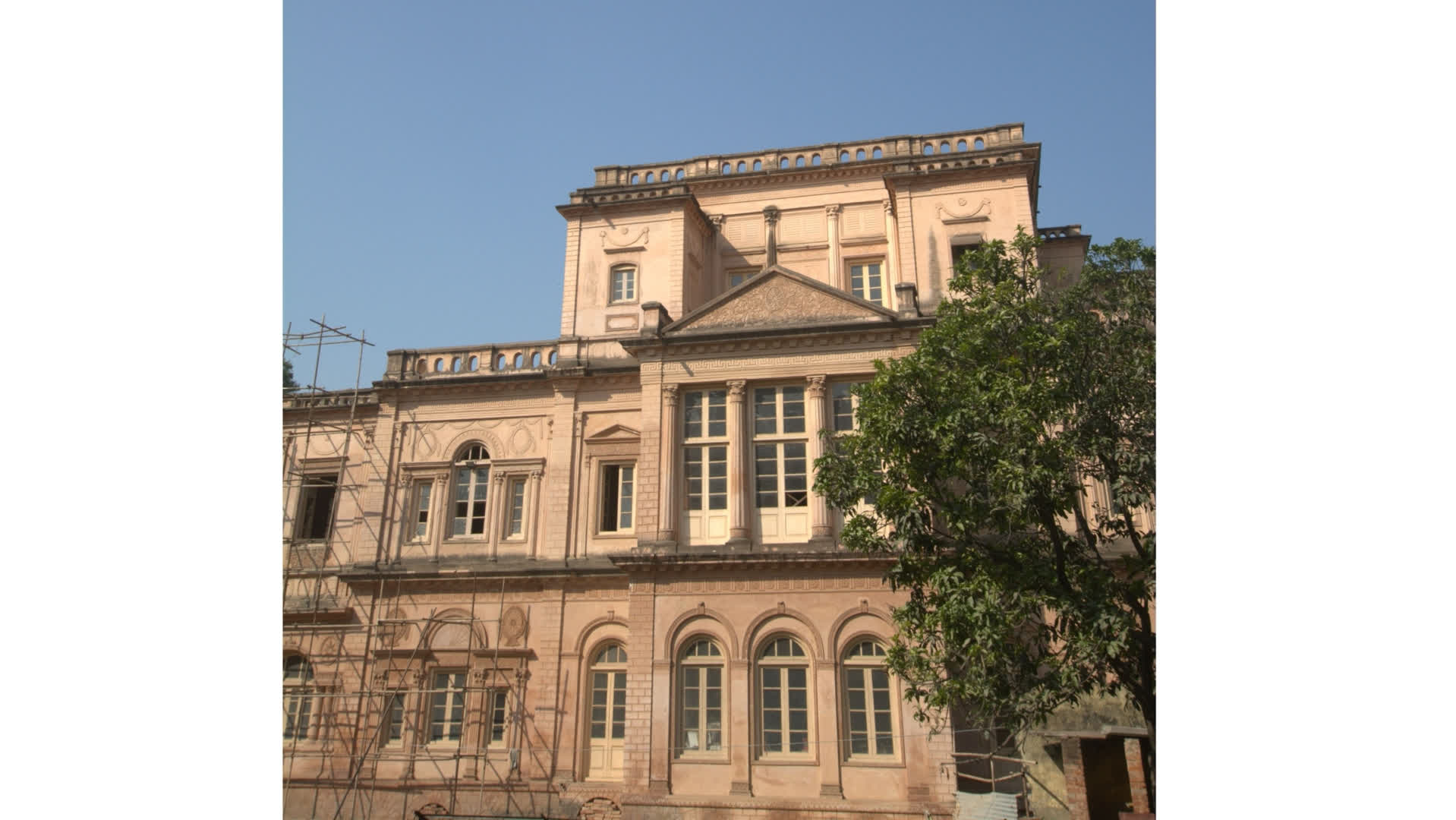 Gulistan-e-Eram: Playground of a Nawab

There is nothing fanciful about the building, on the outside at least. The Gulistan-e-Eram is an elegant mix of European and Awadhi architecture dressed in a rich and earthy plaster, with delicate stucco work embellishing its façade. But behind the subtle exterior is drama and intrigue, including secret tunnels, hidden lockers and even the cold-blooded murder of a Nawab.

Gulistan-e-Eram is one of many grand buildings in the Qaiserbagh area in Lucknow. Built by Nawab Ghaziuddin Haidar (r. 1827-32) and completed by his son and successor, Nawab Nasiruddin Haidar (r. 1832-37), the palace is fronted by a beautiful garden – ‘Gulistan-e-Eram’ means ‘garden of paradise’. In its vicinity are other Nawabi gems such as the Darshan Vilas, Chhoti Chhatar Manzil and Lal Baradari.

For Nasiruddin Haidar, Gulistan-e-Eram was a pleasure palace, in the truest sense of the term. The top storey housed a grand library with a vast collection of books and scriptures from all over the world. The Nawab, it is said, spent hours here, deep in contemplation as he read voraciously.

Nasiruddin Haidar also had a colourful and hedonistic side to his personality. He led an extravagant life and threw lavish parties at the kothi to entertain his European friends. The young Nawab also had a weakness for women. He delighted in their company and married many of them, causing great jealousy and resentment in the court.

The British, always looking for an opportunity to exert more and more control over Indian royals, leveraged the situation, with a little help from an insider. They won over the royal superintendent of the female attendants in the court, Dhania Meri, who mixed poison in the Nawab’s drink. Nasiruddin Haidar was thus murdered in the Gulistan-e-Eram on the night of 7th July 1837, at the age of 35. His death sparked a war of succession that ended with the installation of Nasir-ud-daula on the throne – just what the British wanted.

Gulistan-e-Eram was one of the finest buildings of its time but it was badly damaged during the Revolt of 1857. During this tumultuous time, Qaiserbagh was a hotbed of fighting. The palace was looted and plenty of valuable documents of the Nawabi era where burnt by the British. It is said that no other palace was damaged as brutally as this one.

After Independence, the palace was allotted to the state Health Department. Under its occupation, the structure further deteriorated and it was in danger of collapsing. Dr Roshan Taqui, a noted Lucknow-based historian, wrote a series of letters between 1998 and 2004, urging the state authorities to restore the building.

The palace was eventually restored in 2016-17 but not before some intriguing bits about its history were unearthed. During the renovation work, a series of underground tunnels was discovered, suspected to link the kothi to other palaces in the vicinity. Taqui says these tunnels were probably used to move important papers from one place to another and also for the Nawabs’ queens, who followed the purdah system. The renovation work prised open another secret. Two lockers were discovered embedded in the walls of the top storey of the palace, believed to have been the reading room of Nawab Nasiruddin Haidar. These lockers, made of seemingly indestructible iron, were probably used to store important records and a part of the royal treasure of the Nawabs, as there were no banks at the time.

The building during its restoration work | Author

The Gulistan-e-Eram is being further spruced up under the state government’s Smart City project and, the authorities say, it will be used to host literary events. The library still has the wooden bookshelves and racks of the Nawabi period and, hopefully, with a literary bent, the Gulistan-e-Eram Kothi will write a new and exciting chapter in the 21st century.

Snapshort Histories
Influenza 1918: The Disappearance of Memory
By Chinmay Tumbe

The influenza pandemic ranks as the most catastrophic pandemic in modern history and as India’s worst recorded demographic disaster till date. Over 20 million died on the subcontinent. Then how and why did we forget it? @ChinmayTumbe

Amritsar’s old city holds a dark secret waiting to be told – a network of underground passages that dates back to its bloody past. These tunnels saved the life of a woman who defended Amritsar against a Maharaja, and were places where ‘neighbours’ met to plot against each other