Old Delhi was founded by the Emperor Shah Jahan with the completion of the Red Fort in 1648. These pictures of Old Delhi are from three centuries after. My childhood years were spent in a flat on Nicholson Road running next to Shah Jahan’s city wall near Mori Gate. The view from the front verandah was fantastic. One could see all along the old wall ending with the Kashmiri Gate at a distance of about half a mile. When we went up on the roof, the entire panorama of the old city could be seen from the Lahore gate of the Red Fort to the Jama Masjid and the old clock tower standing in the center of Chandni Chowk.

Pictures illustrating this feature of Old Delhi were mainly shot from 1950 to 1956 with the sole exception of the Kashmiri Gate photograph shot in 1946. Right from the early days while roaming around Old Delhi for interesting shots I tried to capture an unusual angle, weather conditions, or a unique subject like an old tram car which have vanished since the sixties. Before concluding, I might add that while in our last year at the university I was bold enough to ask three of my class friends from Miranda House, the premier ladies college in Delhi at that time, to pose for me inside the Rang Mahal of the Red Fort for adding colour and interest while creating a lively photograph of Shah Jahan’s palace.

Red Fort or Qila-i- Mu’alla, the ‘Exalted Fort’, was built by Emperor Shah Jahan and completed in 1648 CE. After entering this imposing Lahore Gate one had to pass through a shopping arcade called Chhata Chowk, or the Mina Bazaar of the palace. This arcade opened out into a large square which had a water tank in the old times. It was filled up after the 1858 uprising. One entered the palace through Naqqar Khana or the drum pavilion now converted into a museum. The other gate of the Red Fort is the Delhi Gate facing south with two stone elephants guarding the entrance.

A grand panorama of Shahjahanabad now called Old Delhi and Jama Masjid as seen from a high rise building near Turkaman Gate on Asaf Ali Road. This view can no longer be seen. A number of multi-story modern buildings in front and behind the Jama Masjid have completely changed the character of Old Delhi. Many of the buildings seen in this view were more than 100 years old, even in the early fifties of the last century, when this view was photographed.

Silhouette of Jama Masjid | Dhruva Chaudhuri
Support Live History India
If you like Live History India`s work, do consider extending support to us. No contribution is too small and it will only take a minute. We thank you for pitching in.
Donate
*Terms and Conditions

Emperor Shah Jahan laid the foundation stone of the Jama Masjid in 1650 CE. After completing the Red Fort and the fortified city of Shahjanabad he was eager to have a grand place of worship as close to the Red Fort as possible. So a short distance west of the Delhi gate of the fort, a rocky ridge called Koh-Hujila – popularly called Bhojila Pahari, was chosen for this mosque. On the sacred Eid-ul-Fitr day of 1656 CE the Mughal Emperor celebrated the end of holy Ramzan with thousands of his noblemen and humble subjects. The cost of building this grand mosque was Rs. 10 lakhs, a colossal sum in that age. Shah Jahan gave the title of Shah Imam to Imam-ul-Sultan of Bukhara.

Every Sunday, if possible, I roamed around in Old Delhi either on a cycle or just walking. On a cold and misty winter morning this old Afghan man was seen praying , looking towards the Lahore Gate of Red Fort. The composition was extremely graphic to say the least. All that was necessary was to run back and click with my camera without disturbing the man. This picture became an overnight success in many newspapers and magazines as well as exhibitions. It was a spontaneous shot and not consciously shot with a famous photograph by Henri Cartier-Bresson in my mind.

This picture of our flat on the second floor of P&O Buildings, standing behind the old city wall of Shahjahanbad was once again a spontaneously shot photograph. One fine morning as I was sipping my morning tea standing on the front verandah a black and a white horse each standing in front of its cart right across the old wall captured my attention. Without losing a minute in finishing my tea I ran round Mori Gate to capture the contrasting horses against the old city wall with P&O Buildings in the background.

From the very first evening when we reached Delhi on the last day of March 1942 Kashmiri Gate looked like a painting of Constable standing right at the end of the old city wall. So after a gap of four long years as soon as a roll film for our box camera was available I lost no time in going across to this ruined gate which is still in use and now has become a museum piece.

The Kashmiri Gate shopping centre had lost its fashionable character in the early fifties of the twentieth century. On an early winter morning, I caught a cart man waiting alone for a client at the corner of St. James’s Church and the Polytechnic hostel. For me this is symbolic of the days of lost splendour. The Maitland House, once the bungalow of the St. Stephen’s College principal is located just behind the hostel.

The old St. Stephen’s College building was situated inside Kashmiri Gate on the Lothian Road, till 1941. I was lucky enough to have taken a photograph of the first foundation stone inside the portico of this building when the impressive stone building was turned into Delhi Art College. Now it is a branch of the Election Commission and the ‘No Entry’ rule is strictly enforced.

A Boy and a buffalo | Dhruva Chaudhuri

A cattle-grazer boy riding a buffalo in Chhabigunj lane of Kashmiri gate. The old brick wall indicates that it is a late Mughal building of the 19th century.

Elephant riders were commonly seen in Old Delhi in the 1950s, next to DTU (Delhi Transport Union) buses on all main roads. This picture was shot just outside Mori Gate on the Circular Road. The Mori Gate bus stand has now come up at this location.

Old tram cars of 1910 or 1920 vintage trundled along in Old Delhi till 1967. This tram in Chowri Bazaar behind Jama Masjid is about to reach its terminus under the south gate of the mosque. These trams went round in a circle touching Esplanade near Red Fort, through Chandni Chowk Fatehpuri and Lalkuna back to Jama Masjid.

From Jama Masjid to Delhi gate a number of narrow lanes ran behind Daryagunj. This picture shows such a typical lane called Sui Wallan.

Food for the Soul | Dhruva Chaudhuri

All around the basement of Jama Masjid, food stalls making kababs and other delicacies flourished till the seventies of the last century. Even the now famous chain Karim’s started their first establishment in a stall like this. As the business grew they moved into a bigger place inside a lane next to the southern gate of the mosque, and now all over the National Capital Region.

This shop famous for jalebies, aloo puris, and also samosas for nearly 80 years is located at the corner of Dariba Kalan, famous for silver jewelry and Chandni Chowk. Further down, next to the Fountain Square was the legendary Ghantewalla’s Sweet Shop, which has closed down.

Though Ghantewalla’s sweet shop is missing from my collection, a typical but small sweet shop in Batasha Gali of Khari Bauli, the famous provision market, is included in this feature. All Ghantewalla’s salesmen used to dress like the sweet seller in this photograph.

This group shot of chess players shows a typical ‘Haveli’ or a traditional house in Old Delhi located in a lane of Sita Ram Bazaar. Had it not been for the statue of Mahatma Gandhi this picture might have been believed to show a scene of more than 100 years ago.

This impressive clock tower, one of the early British buildings of Old Delhi, once stood at the center of Chandni Chowk. In our youth we often heard its half-hourly chime like the Big Ben of London. All of a sudden in the last week of March 1951, I saw the clock tower disappearing from our roof with a thundering roar. Next day it was very sad to see this crumbling tower with pigeons fluttering about their roost. No less than three persons died in that accident, which was attributed mainly to the tram cars passing next to the clock tower.

The sole equestrian statue in Old Delhi was that of King Edward VII of England. This dynamic statue was located inside a park in front of Jama Masjid, once known as Edward Park. In the 1960s, like all British statues in Old and New Delhi, King Edward’s statue was removed to Coronation Park in Civil Lines, North Delhi. From there, it simply vanished one day!

Rang Mahal inside Red Fort with three of my friends to add colour and interest to an otherwise empty arcade.

Dhruva N. Chaudhuri is a noted photojournalist who taught photojournalism and visual communication at The Indian Institute of Mass Communication for over 25 years.  His photos have been exhibited regularly across India and at international exhibitions held by the Royal Photographic Society, London; New York and Boston and also in Hong Kong, Singapore, and Berlin. He has illustrated many coffee table books for publishers like The Oxford University Press and Niyogi Books. 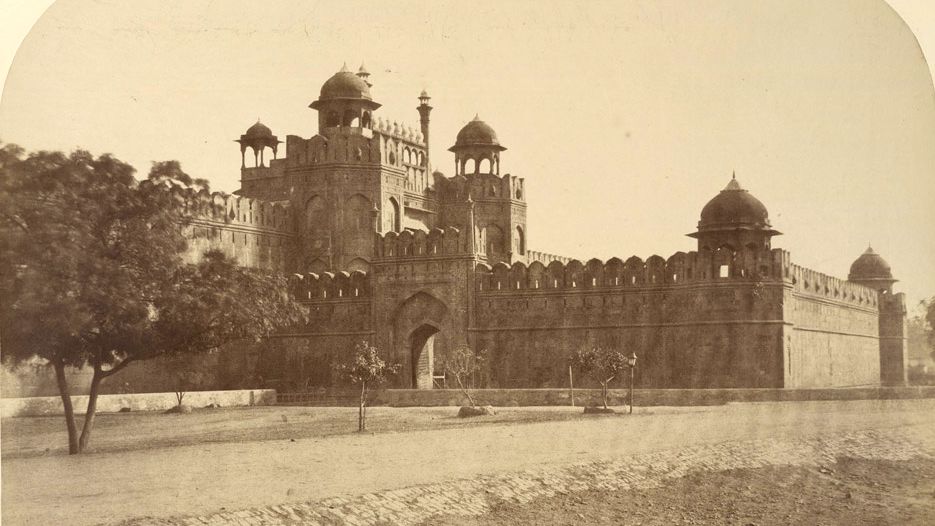 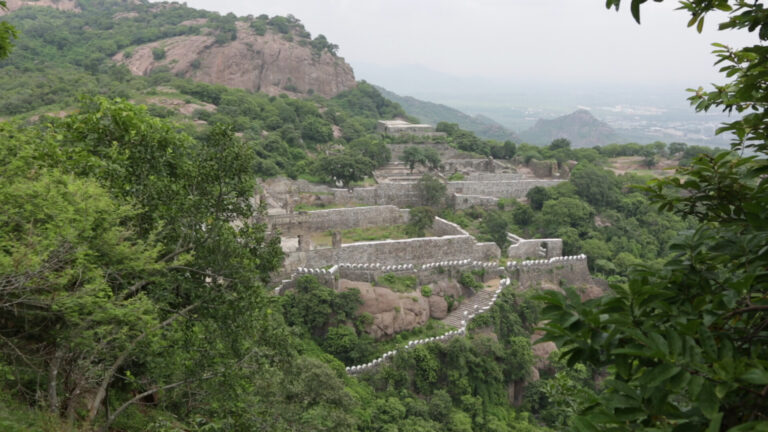 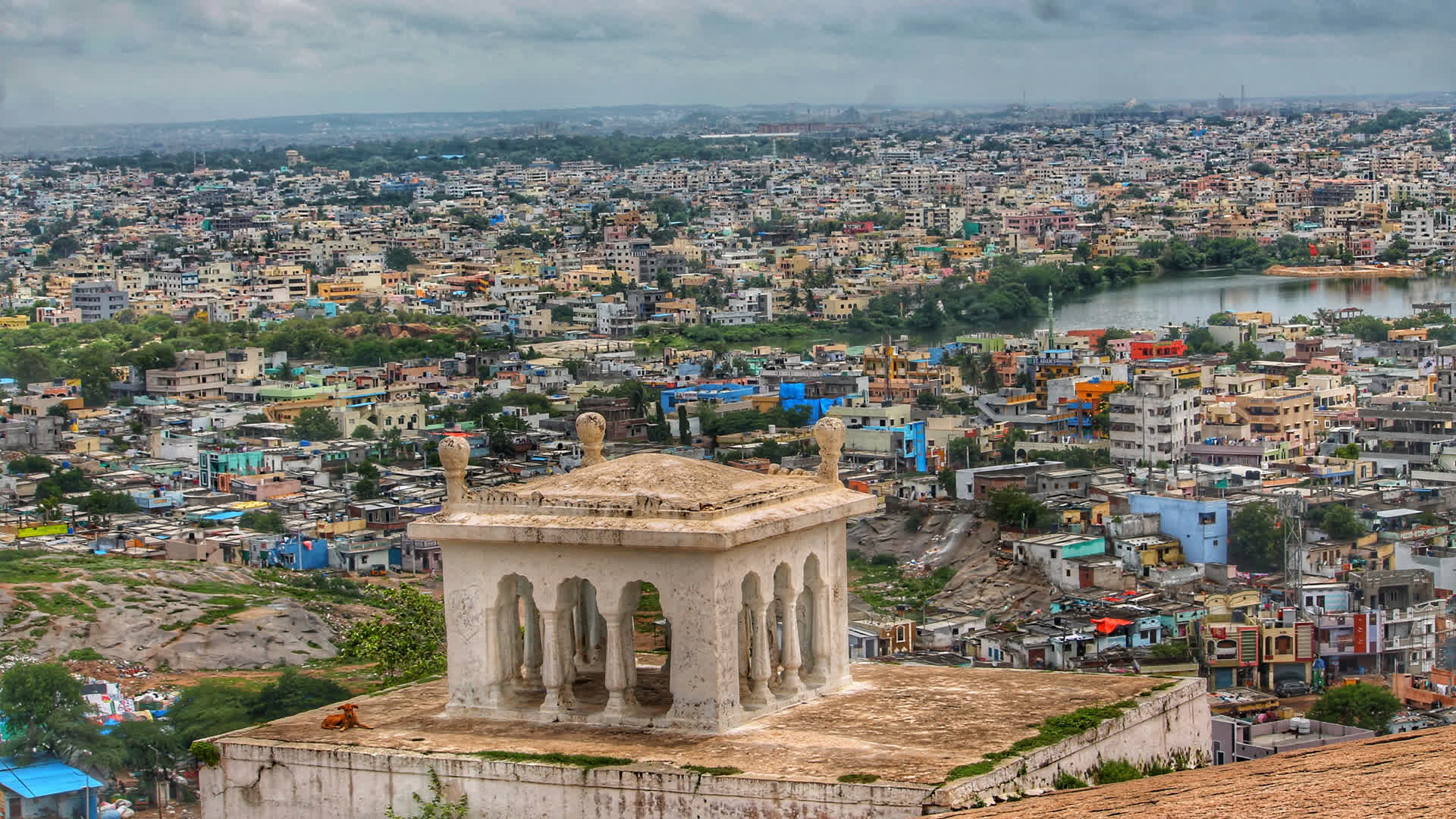 Not far from the heart of Hyderabad is a hillock that devotees ascend when they want their wishes fulfilled. Catch the story of Moula Ali Hill and a dargah dedicated to Hazrat Ali... 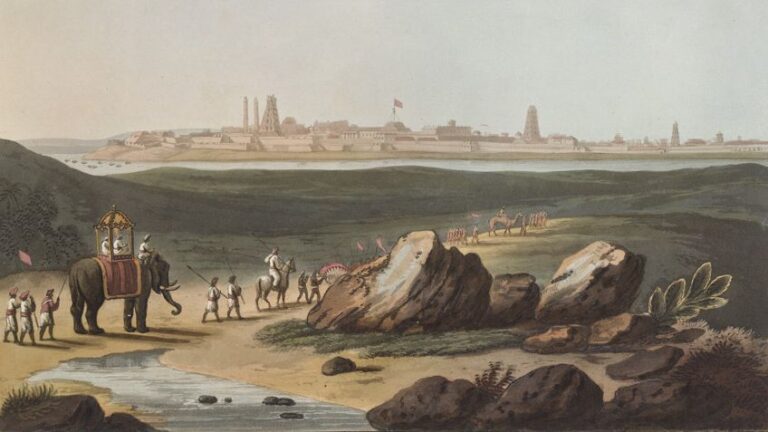