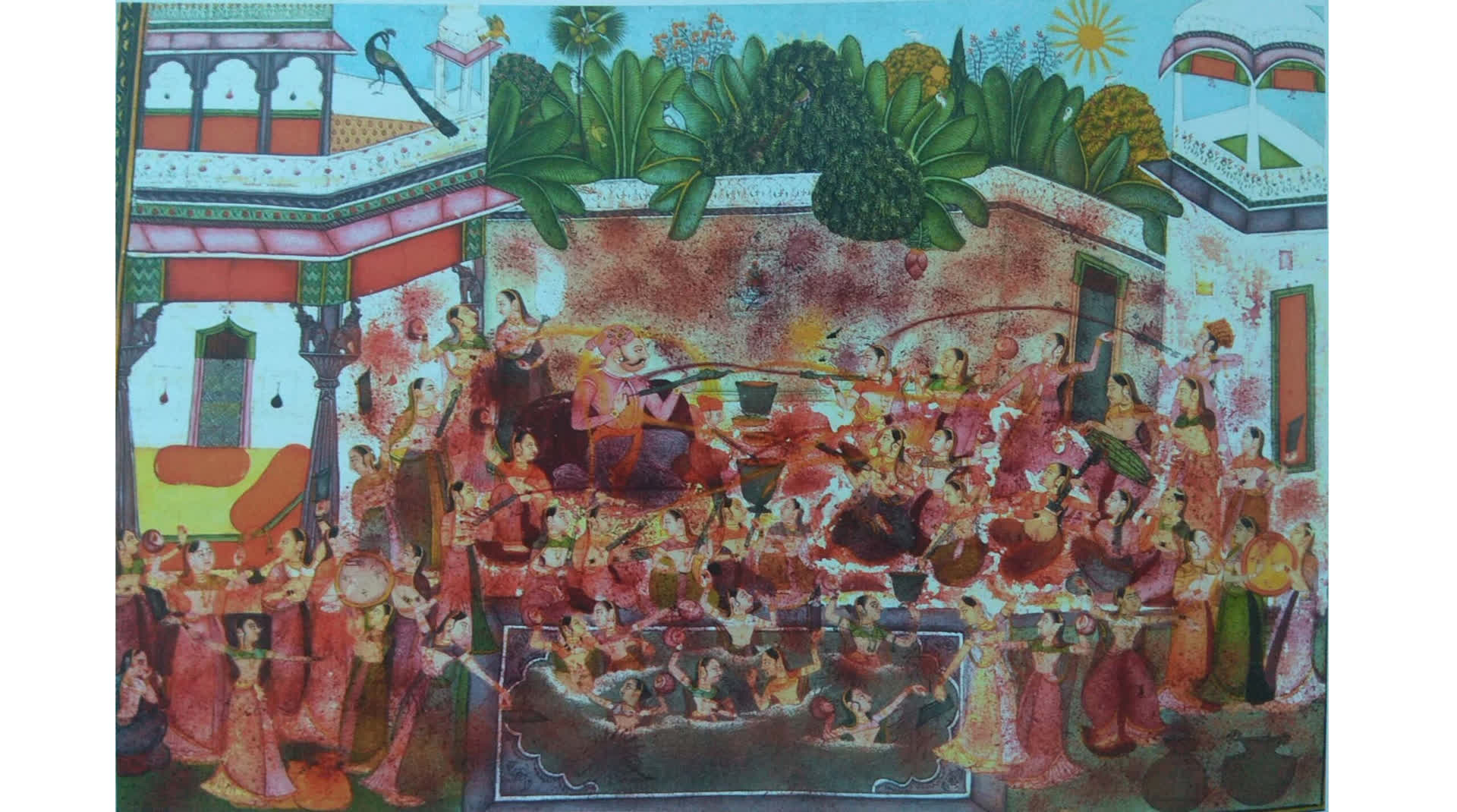 Colours of Holi Through the Ages

It’s marked by a riot of colour and wild revelry but did you know that, as far as festivals go, Holi has inspired the richest outpouring of art in India? While the earliest reference to Holi in literature comes from the works of poet Kalidasa, in the 4th CE, it is in the medieval courts, from Rajasthan to Vijayanagara and the Mughals, that the festival came into its own, as we know it today.

The great Sanskrit poet Kalidasa was the first to write about Holi.

In his poem and his play, Kumarasambhava and Malvikagnimitram, dated to the 4th and 5th centuries CE, he mentions the celebration of the festival of Holi. The festival is, of course, also mentioned in religious texts like the Vishnu Purana and Mimamsa Sutra, dating back from the 2nd century BCE to 2nd century CE.

But it is in the medieval period, starting with the 15th CE, that Holi makes it to art and sculpture. Interestingly, the first reference to someone playing Holi comes from South India, in the Vijayanagara city of Hampi. Here, you can find a sculpture panel depicting revellers celebrating with music, dance and what looks like a primitive version of the pichkari or water gun.

While at first it may seem surprising that there aren’t any artistic or sculptural references from earlier, it is really in the artists’ studios of the Rajput, Mughal and then the hill states’ courts that Holi came to be celebrated in vivid colour. After all, this was a festival celebrated by Hindus and Muslims with great gusto. Let us explore the ways in which the festival has been depicted through time and place in art. 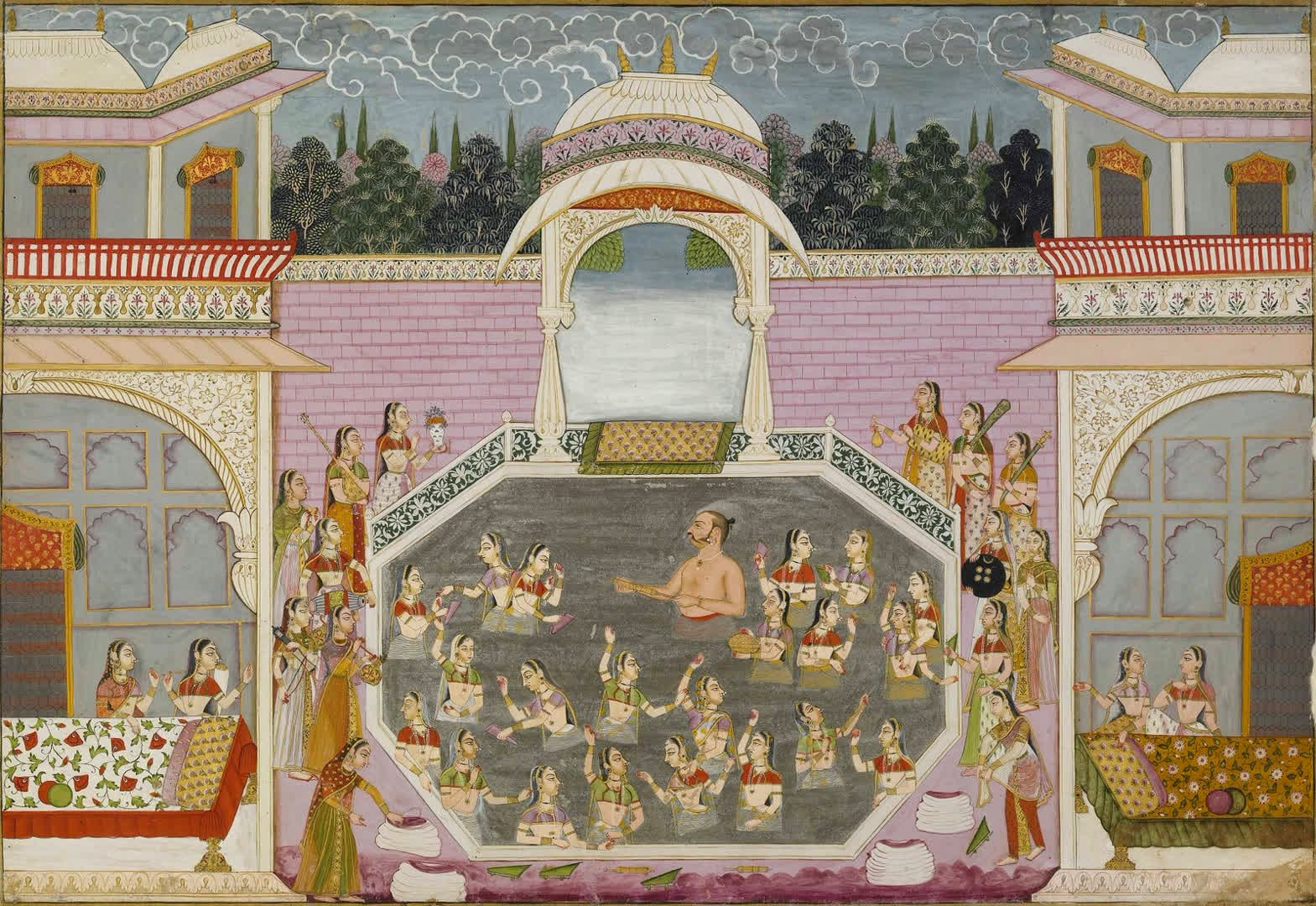 Maharaja Bakhat Singh rejoices during Holi, Nagaur, c. 1748–50 | Mehrangarh Museum Trust
Support Live History India
If you like Live History India`s work, do consider extending support to us. No contribution is too small and it will only take a minute. We thank you for pitching in.
Donate
*Terms and Conditions

One of the earliest miniature paintings of the festival is this one of a couple celebrating Holi in Mewar, officially dated to the 17th century but experts believe it could be older.

Holi was one of the few festivals when women could express their joy and pleasure and engage in unrestrained merriment, and this mid-17th century miniature from Bikaner is a perfect example of that. 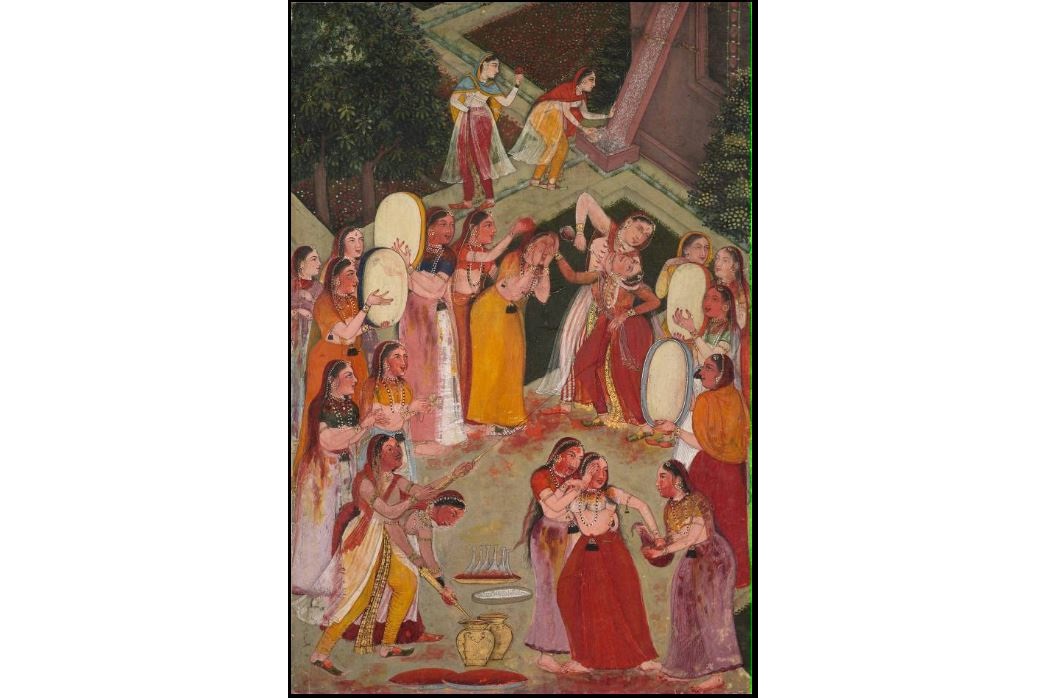 Krishna is one of the biggest muses of Indian art, so it is natural to expect the Lord of merriment to be in the thick of the Holi action. One can see him playing Holi with Radha in this 18th century painting from Nathdwara. 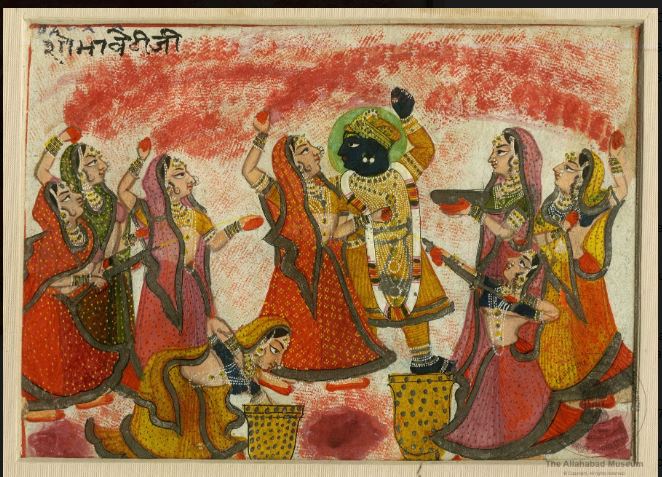 One can see Gokul Rawat Das, one of the minor chieftains of Mewar, in this painting from the 19th century. 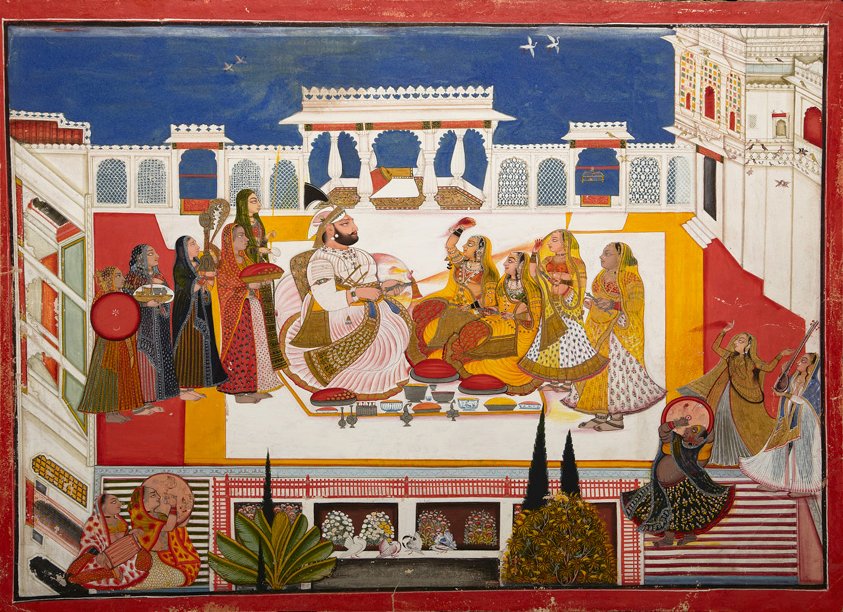 The Mughal rulers, especially Jahangir, were great fans of Holi and we can find many images of him joining in the revelry of this festival, like this posthumous one from Lucknow. 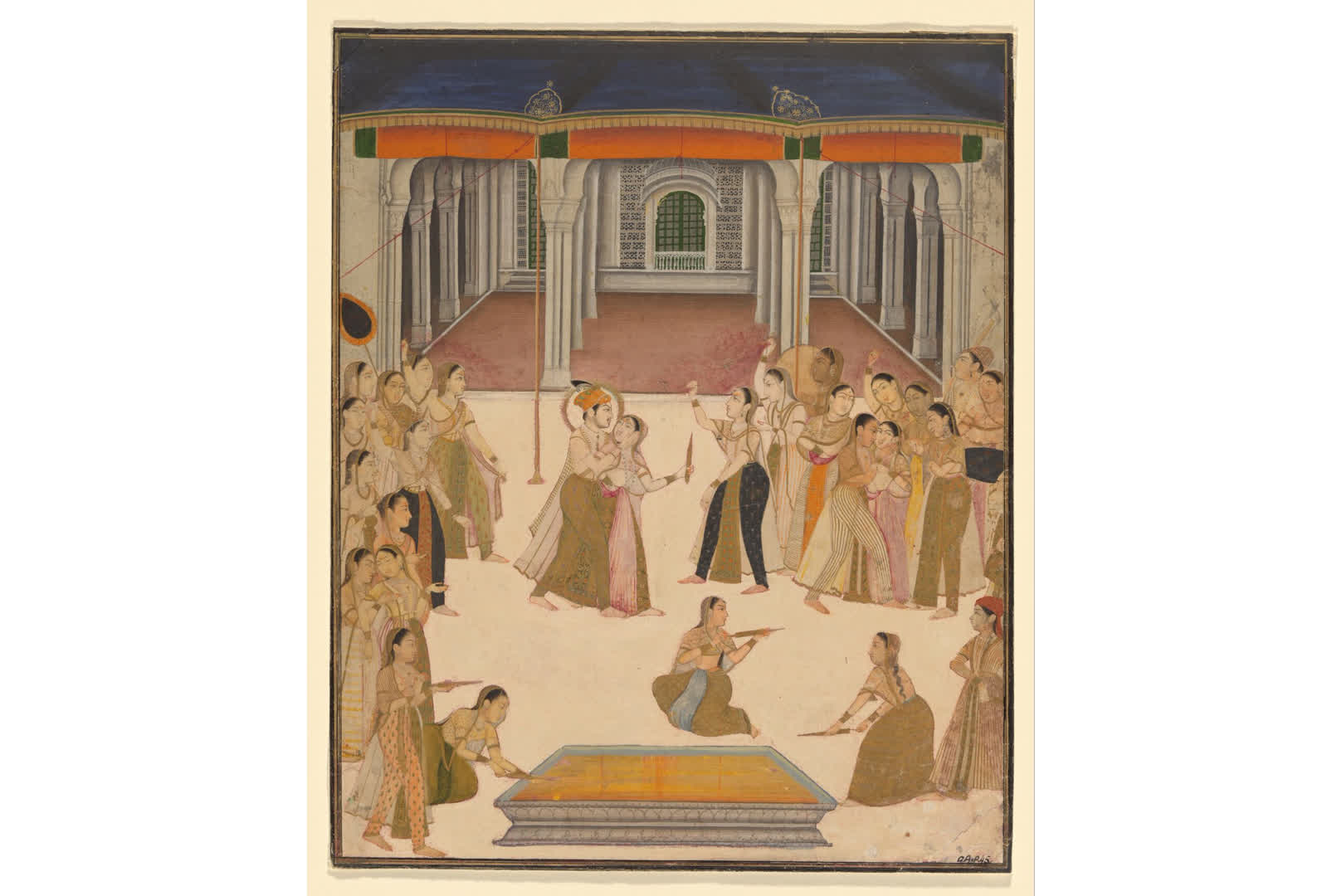 Emperor Jahangir celebrating Holi with the ladies of the Zenana, Lucknow, c. 1800 | National Gallery of Australia

Many major and minor royals have been depicted participating in Holi revelry, like in this painting of a prince with his harem in Farrukhabad in 1780. 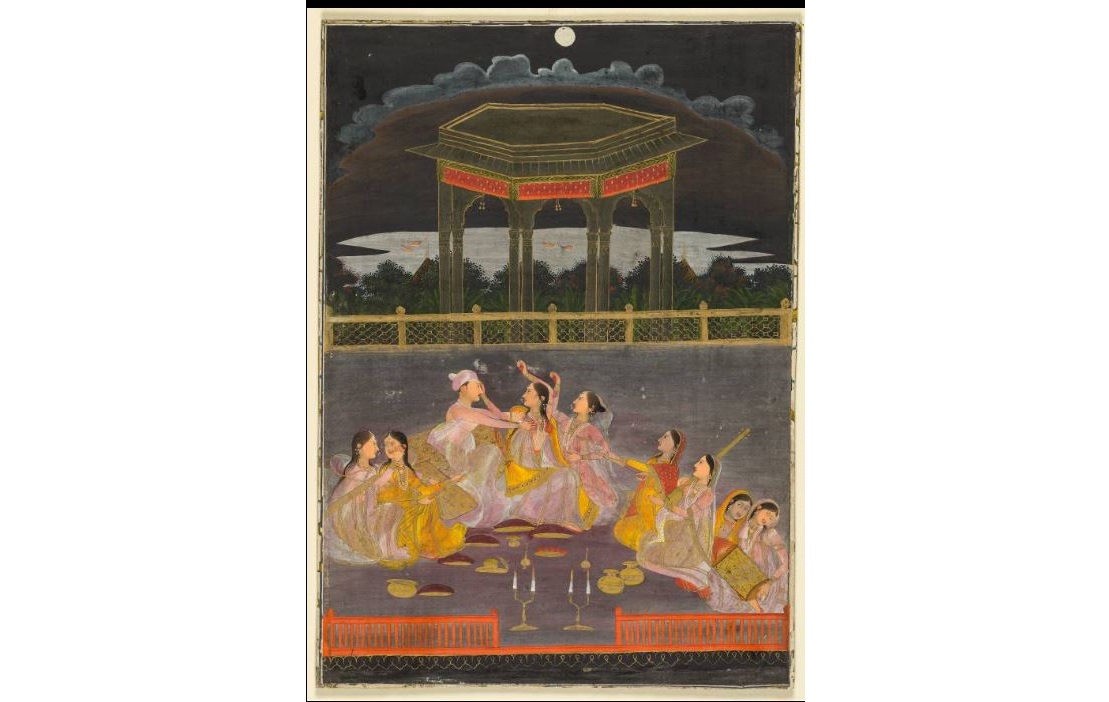 Holi’s favourite theme of depicting Krishna playing Holi is continued by the Mughals, with paintings like this one from 19th century Lucknow. 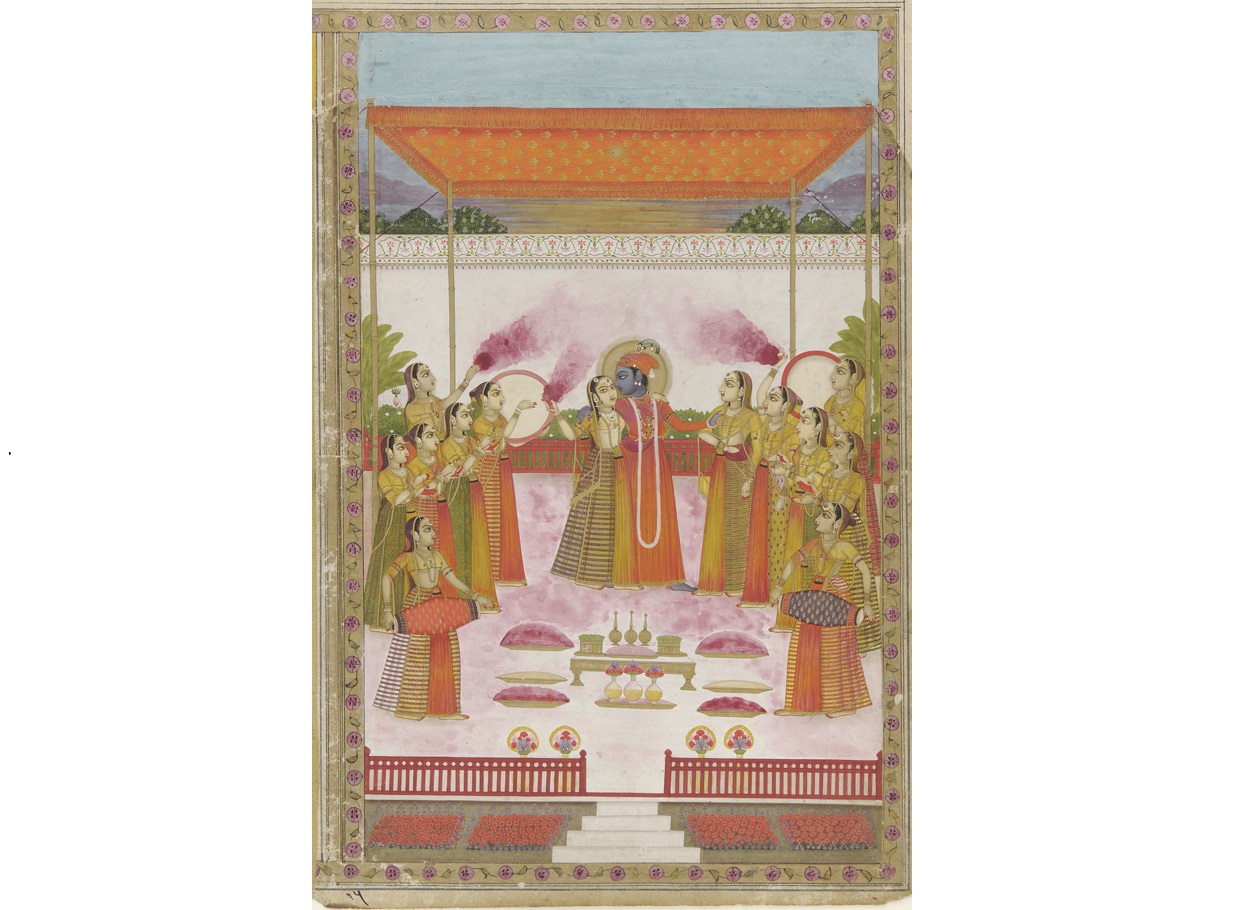 The celebration of Holi and its depiction in art spread to the Deccani courts in South India as well as the Pahari courts in the north, as can be seen from these paintings from collections across the world.

The Deccani kings and princes took great pleasure in the festival and thus the Deccani paintings largely portray royalty playing Holi, like these paintings from 18th century Shorapur and Hyderabad. 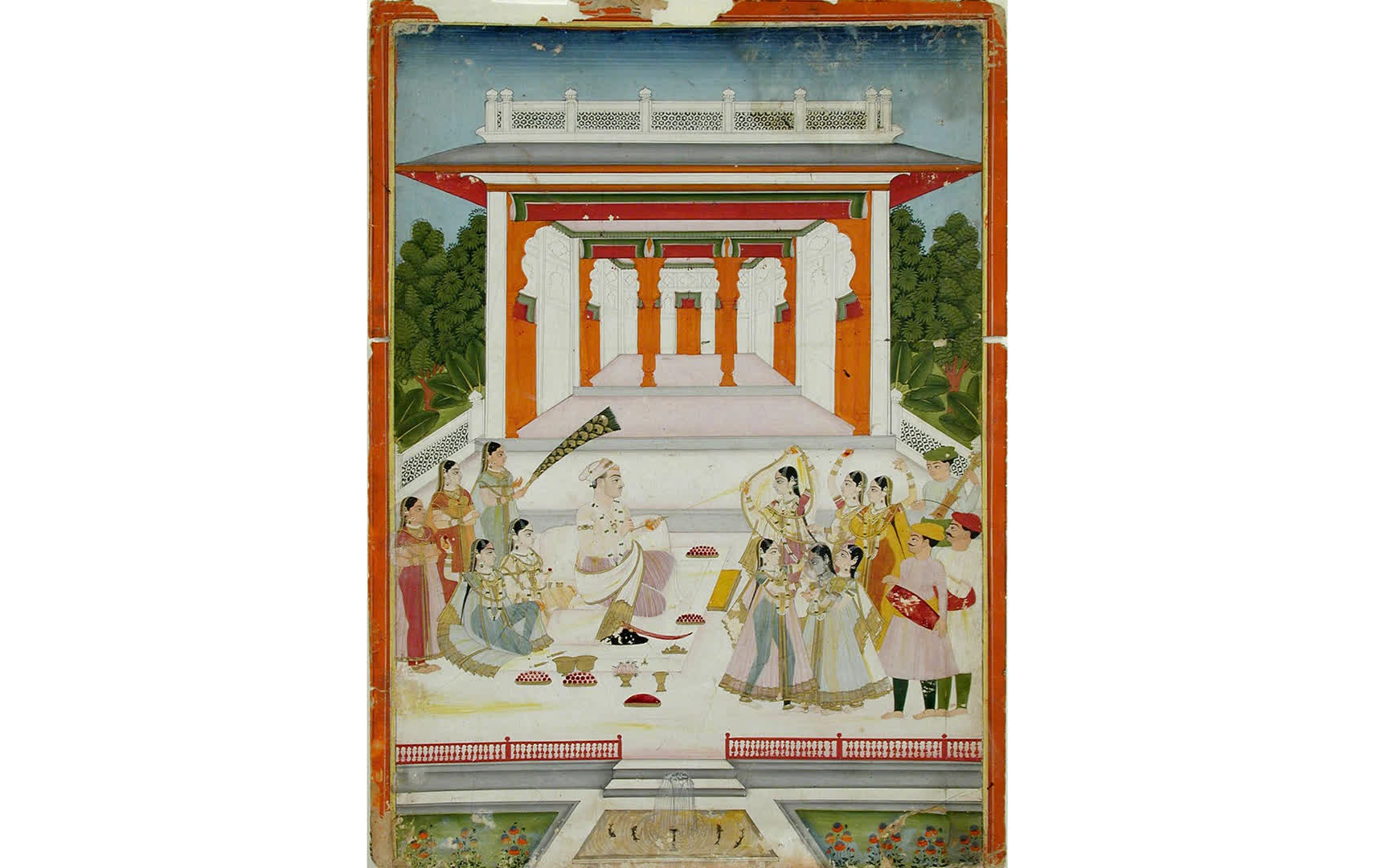 A Maharaja playing Holi with women near a garden pavillion, Deccani, 1765 | Wikimedia Commons 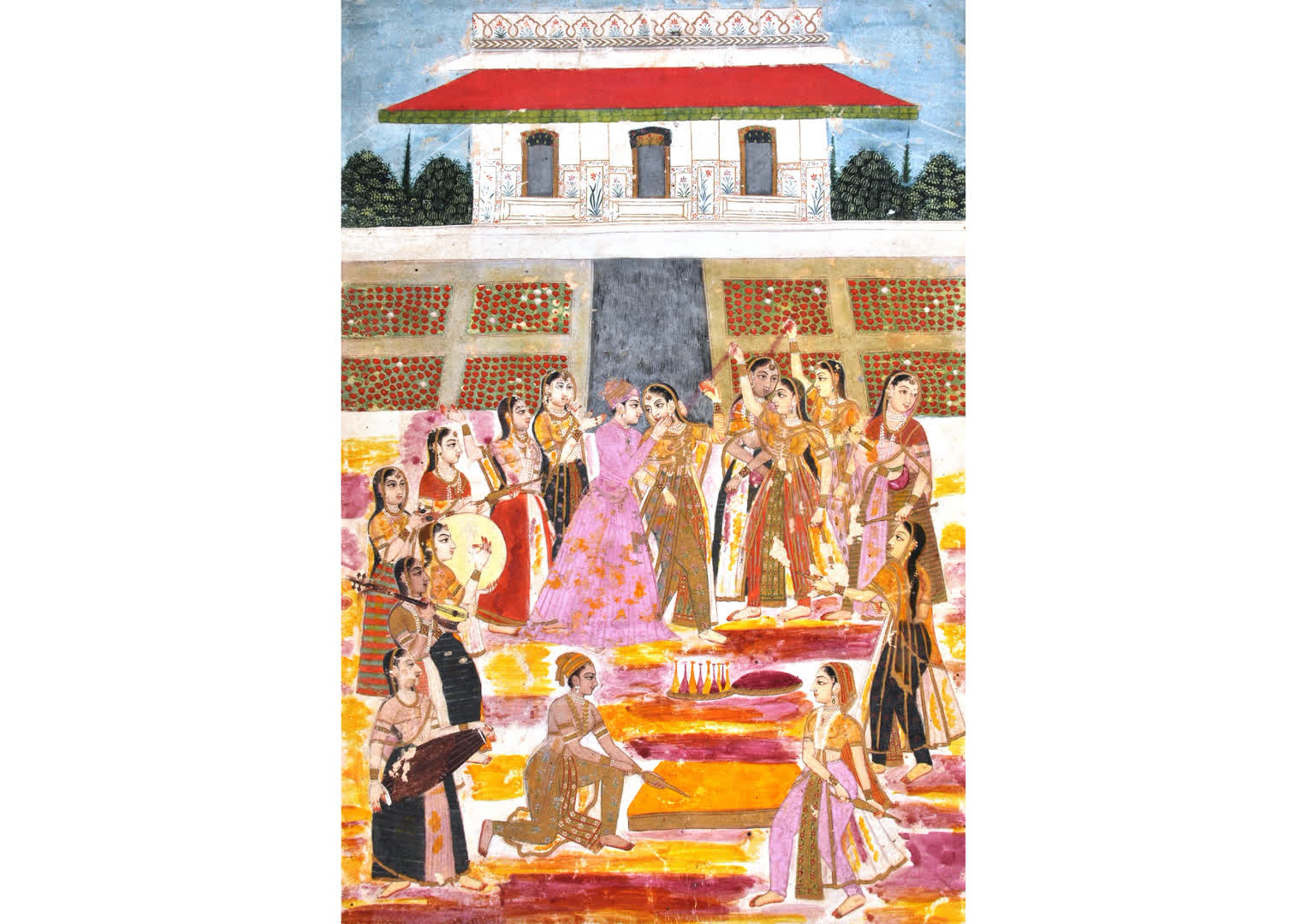 In the Pahari schools, which focus on the depiction of people and on brilliant colours, images of Radha and Krishna abound. Two excellent examples are these two 18th century paintings from Kangra and Guler. 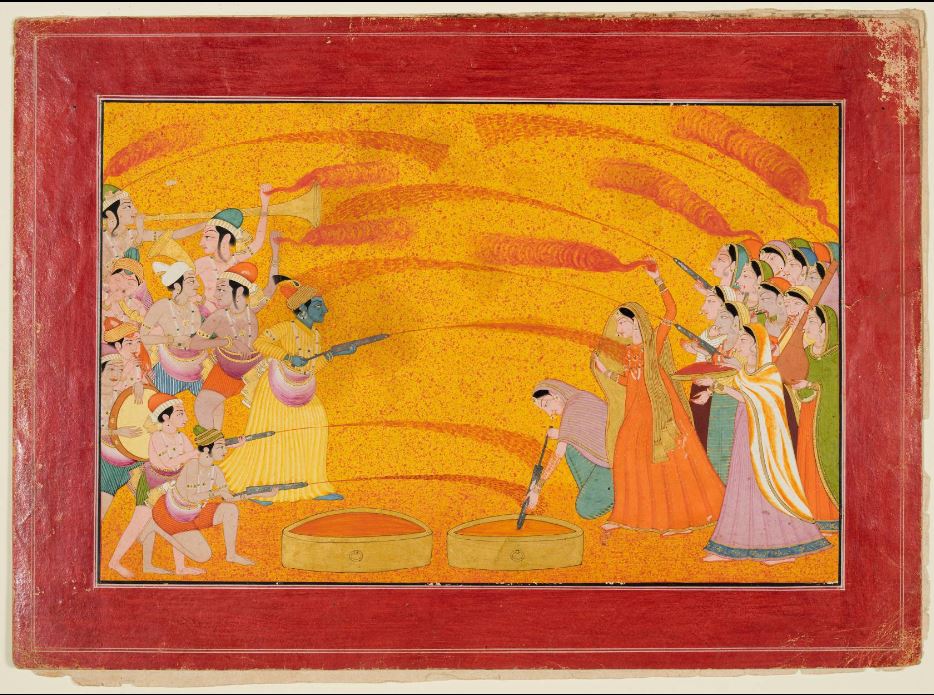 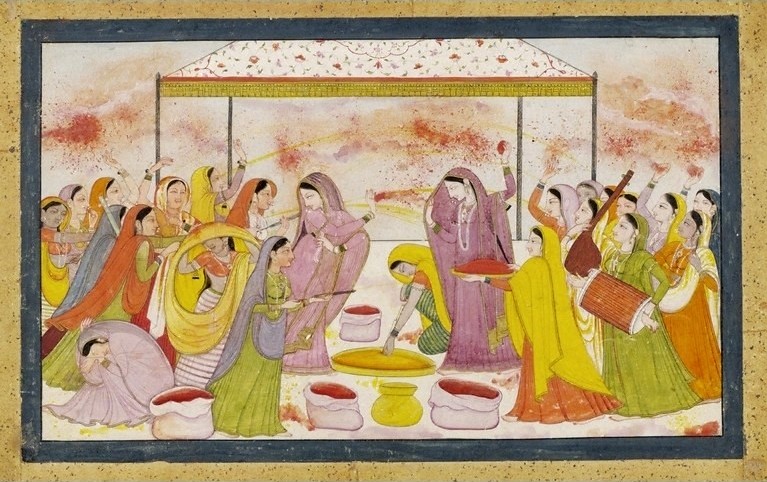 The 18th and 19th centuries saw the arrival of Europeans in large numbers on the Indian subcontinent and with it, the emergence of Company Art. The Europeans, with their strict Victorian morals and Catholic upbringing, were obviously astounded by the festival and depicted it in their paintings. Some of these are:

Holi being played in the courtyard, c. 1795 | British Library 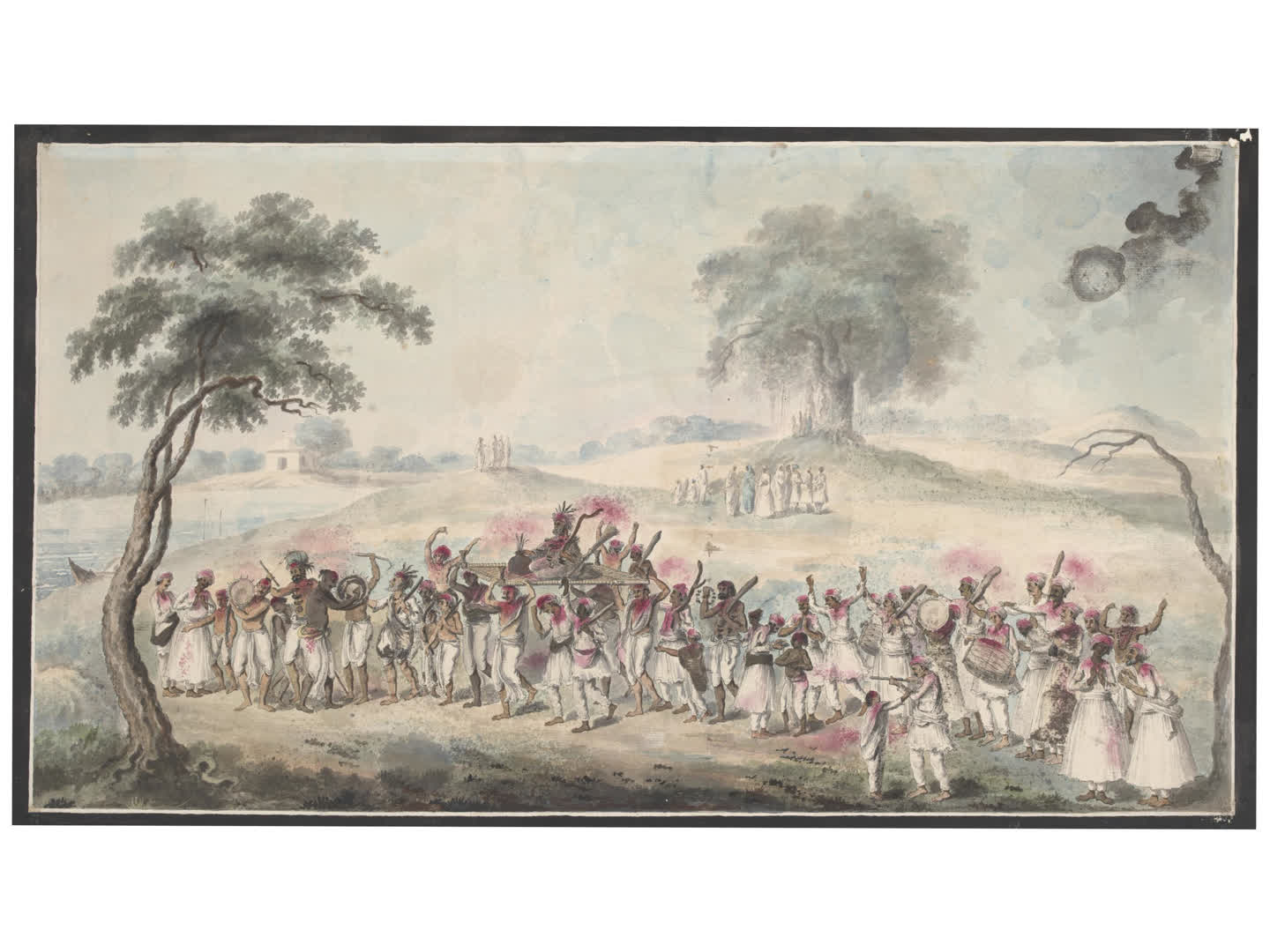 The colours, food, dance, music and joy of Holi are infectious and draw everyone to the festival, regardless of religion or ethnicity. This unity in diversity and all-round exuberance has always inspired art, and these paintings only hint at the gaiety with which the festival has been celebrated across time. 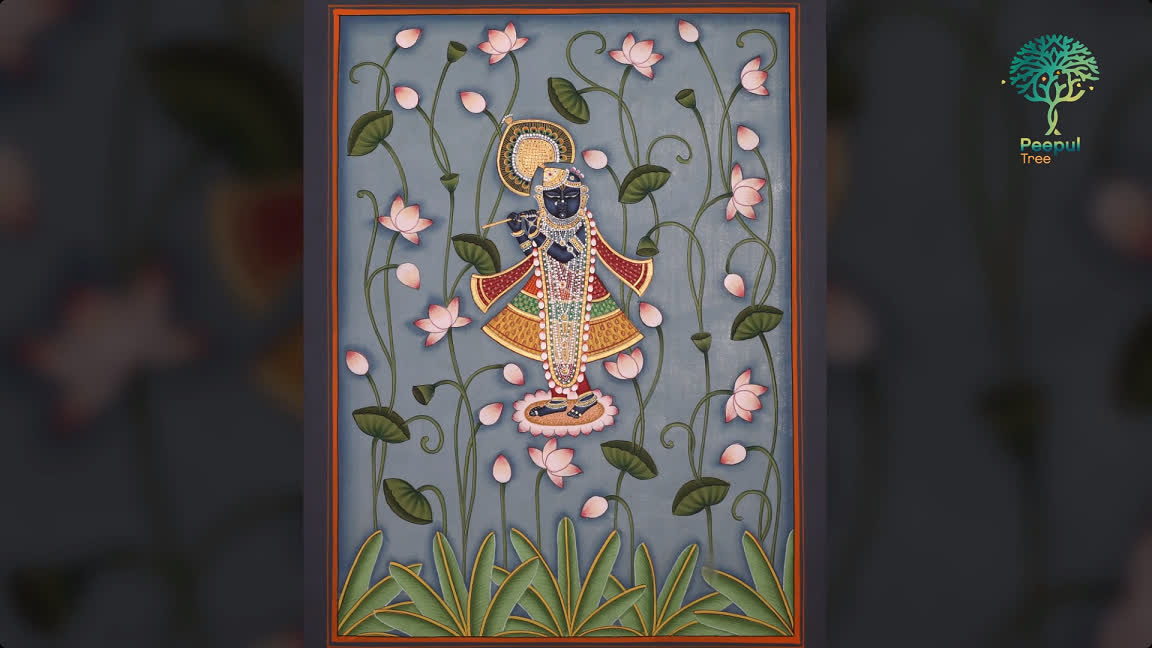 Pichhwai: A Celebration of Lord Krishna
Pahari Paintings: Famed Art of the Hills 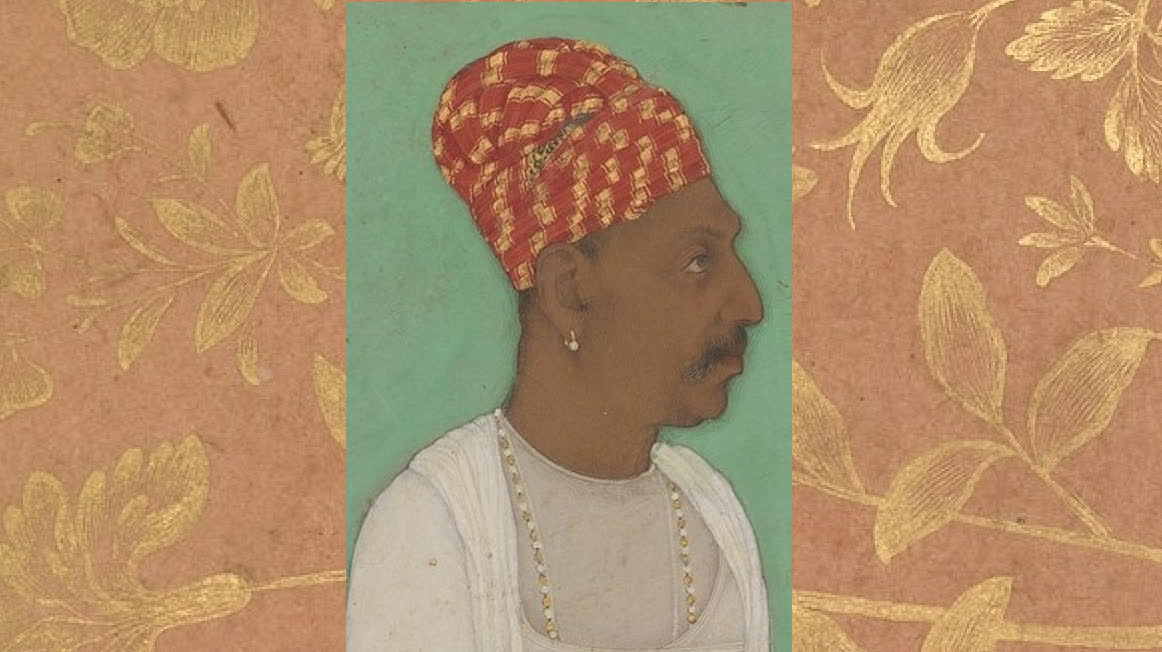 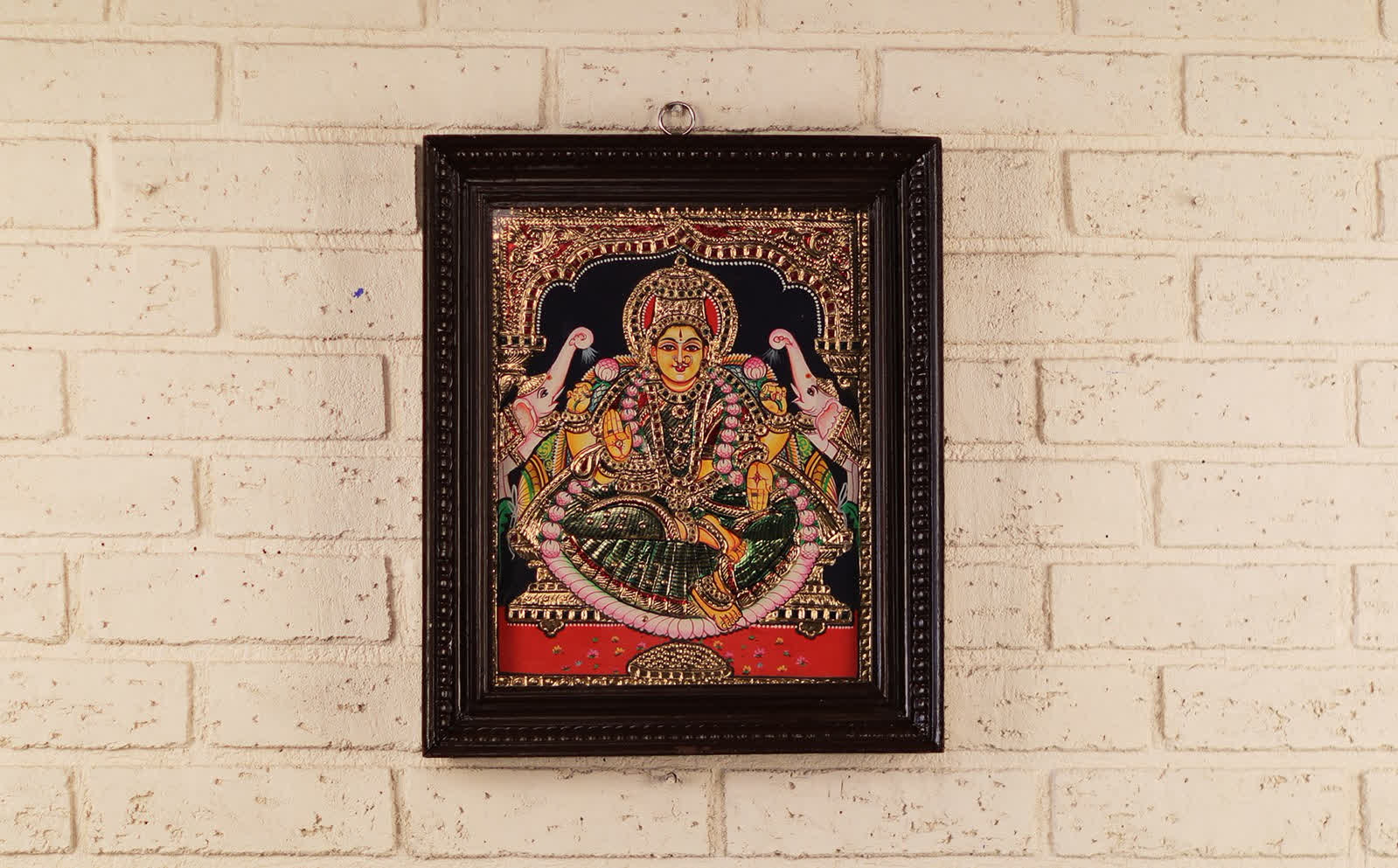 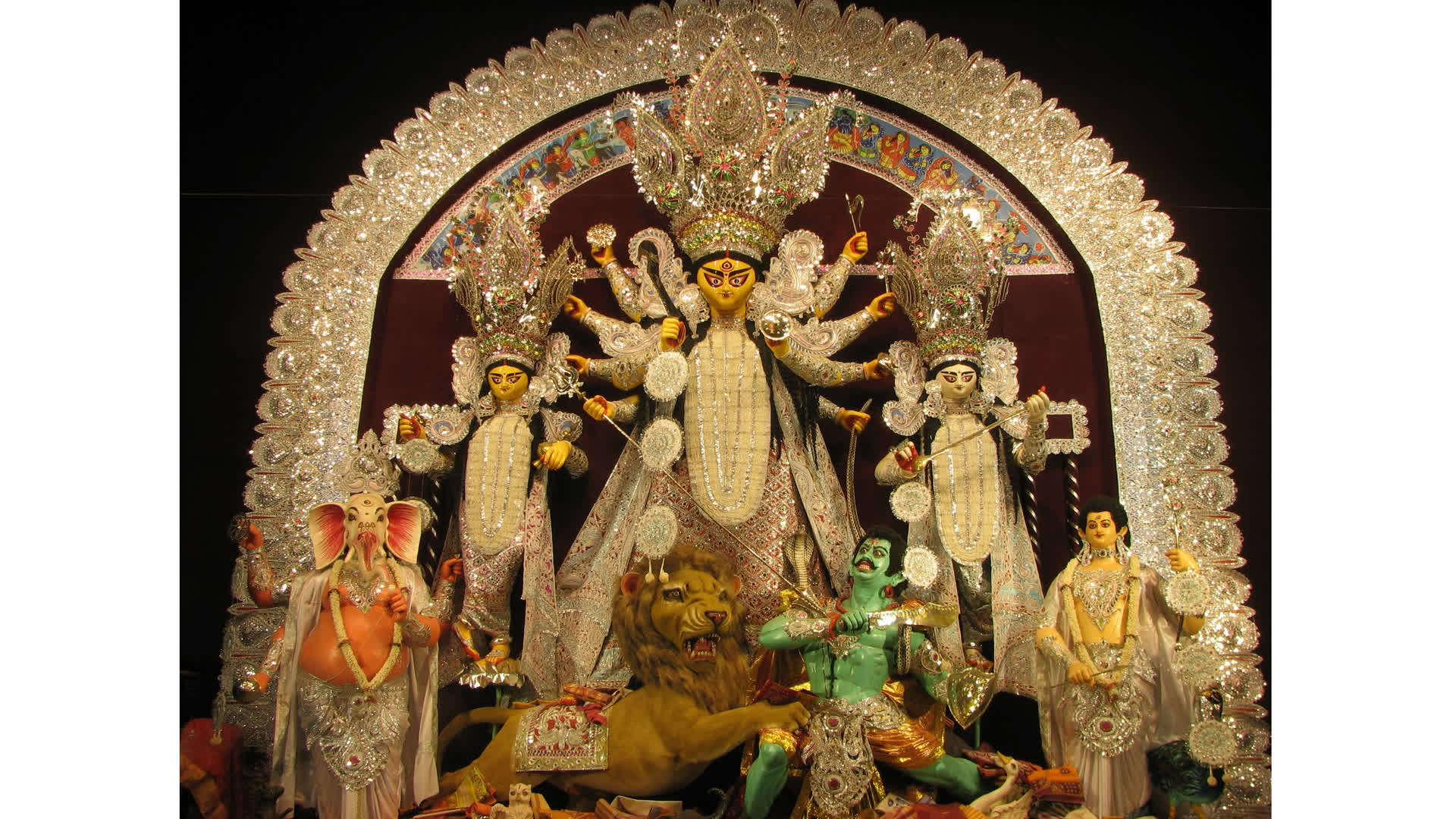 It’s the festival every Bengali holds dearest to their heart. But how did #DurgaPuja acquire this status? It’s a tale of ancient battles, colonial triumphs, and finally a group of young men who decided they wanted to be part of the celebrations too 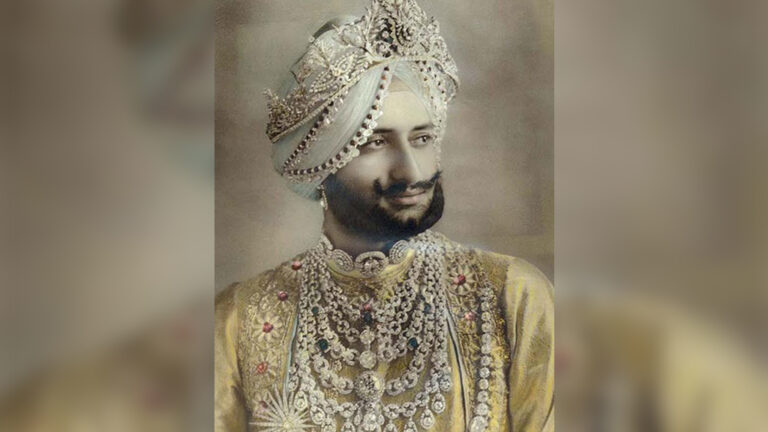