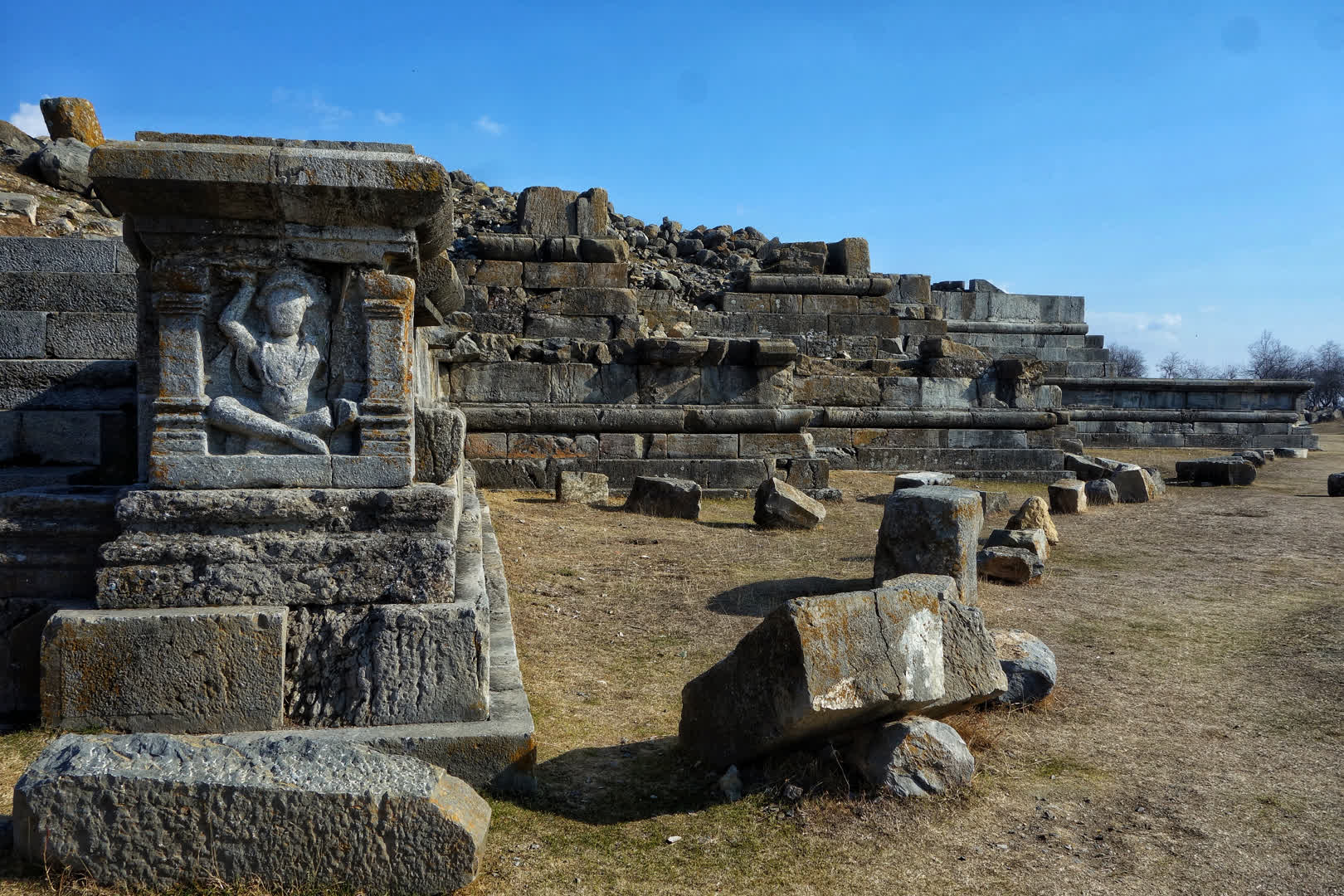 King Lalitaditya was one of  Kashmir’s most famous rulers. But did you know, that his capital Parihaspora, near Srinagar remains one of the most confounding sites in India. Why are there thousands of stones scattered all around, its once grand buildings? Find out

A short drive from Srinagar, on a plateau overlooking the Jhelum River, is a monumental jigsaw puzzle in stone. Neatly laid out across a large area are thousands of stones, rocks and small boulders worked into perfect shapes and carefully arranged on the earth. The stones fill the area between the plinths of three structures, whose size suggests that they must have been nothing short of spectacular in their time.

Named ‘Kani Shahr’ or ‘City of Stones’ by the locals, this is all that remains of the ancient capital of Parihaspora, a marvellous city built by one of Kashmir’s most well-known kings, Lalitaditya Muktapida, in the 8th century. Lalitaditya was a great conqueror and he built a vast empire that stretched across the borders of the Indian subcontinent. What happened to the heavenly city he built and why was it so painstakingly taken apart? 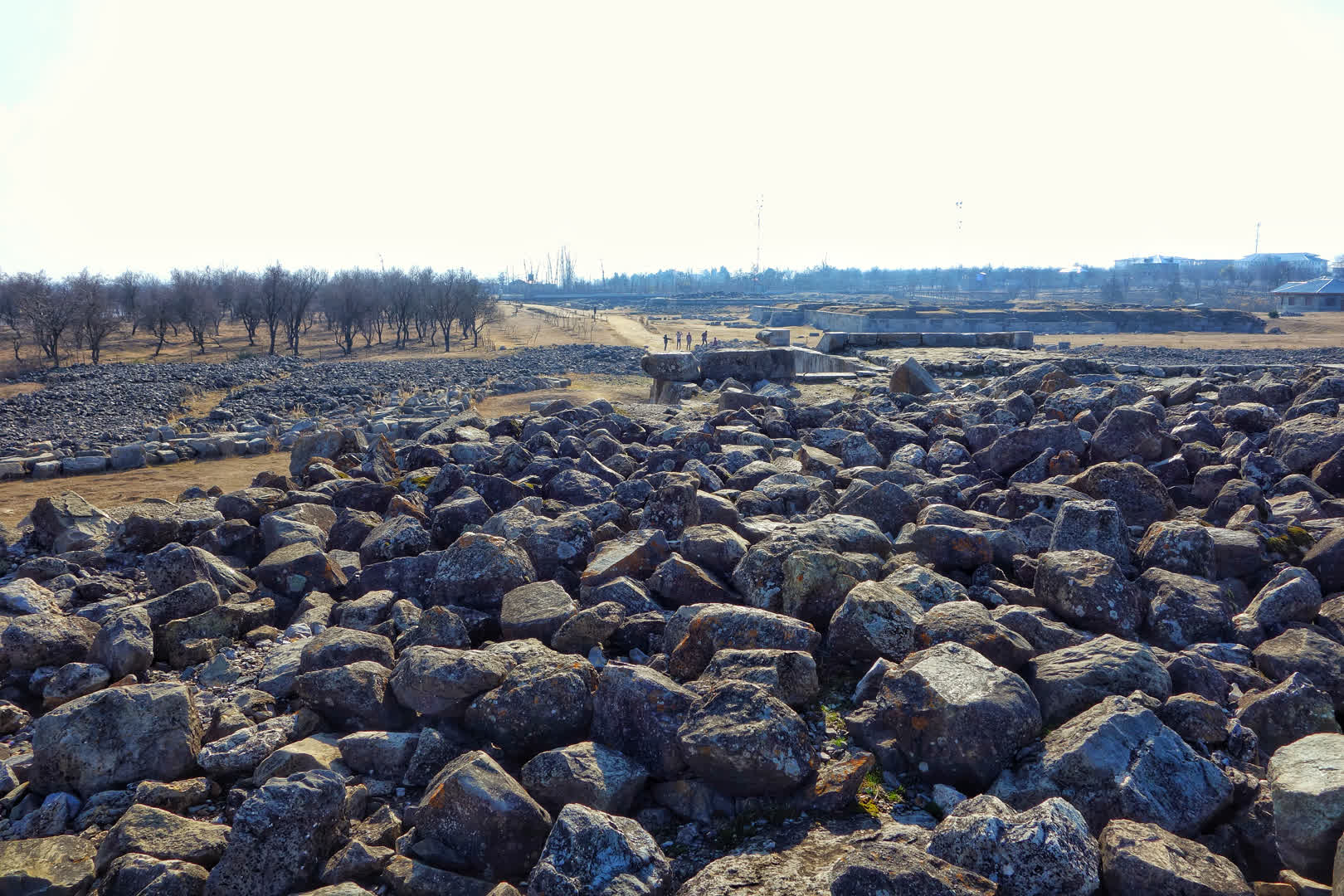 A view of the ‘Kani Shahr’ | Author

Much of what we know about Kashmir’s ancient kings is from a text called Rajatarangini (River of Kings) written by the 12th century Kashmiri Scholar-Pandit Kalhana between 1148 and 1150 CE. Rajatarangini was translated into English by noted Hungarian Indologist Aurel Stein, who used a 17th century manuscript of the work for his translation, in 1900 CE. To date, Stein’s translation is considered one of the most authoritative works on the subject.

Rajatarangini tells us about Lalitaditya Muktapida, the 5th ruler of the Karkota dynasty who ascended the throne in 724 CE. Ruling from his capital in Srinagara (Srinagar city), Lalitaditya was a great warrior who is said to have fought wars with Kannauj and the Rashtrakutas of the Deccan. Pandit Kalhana mentions the huge war booty that Lalitaditya acquired through his campaigns. He is also said to have conquered important towns along the Silk Route such as Kuchan and Turfan, in today’s Xingjiang Province of China. 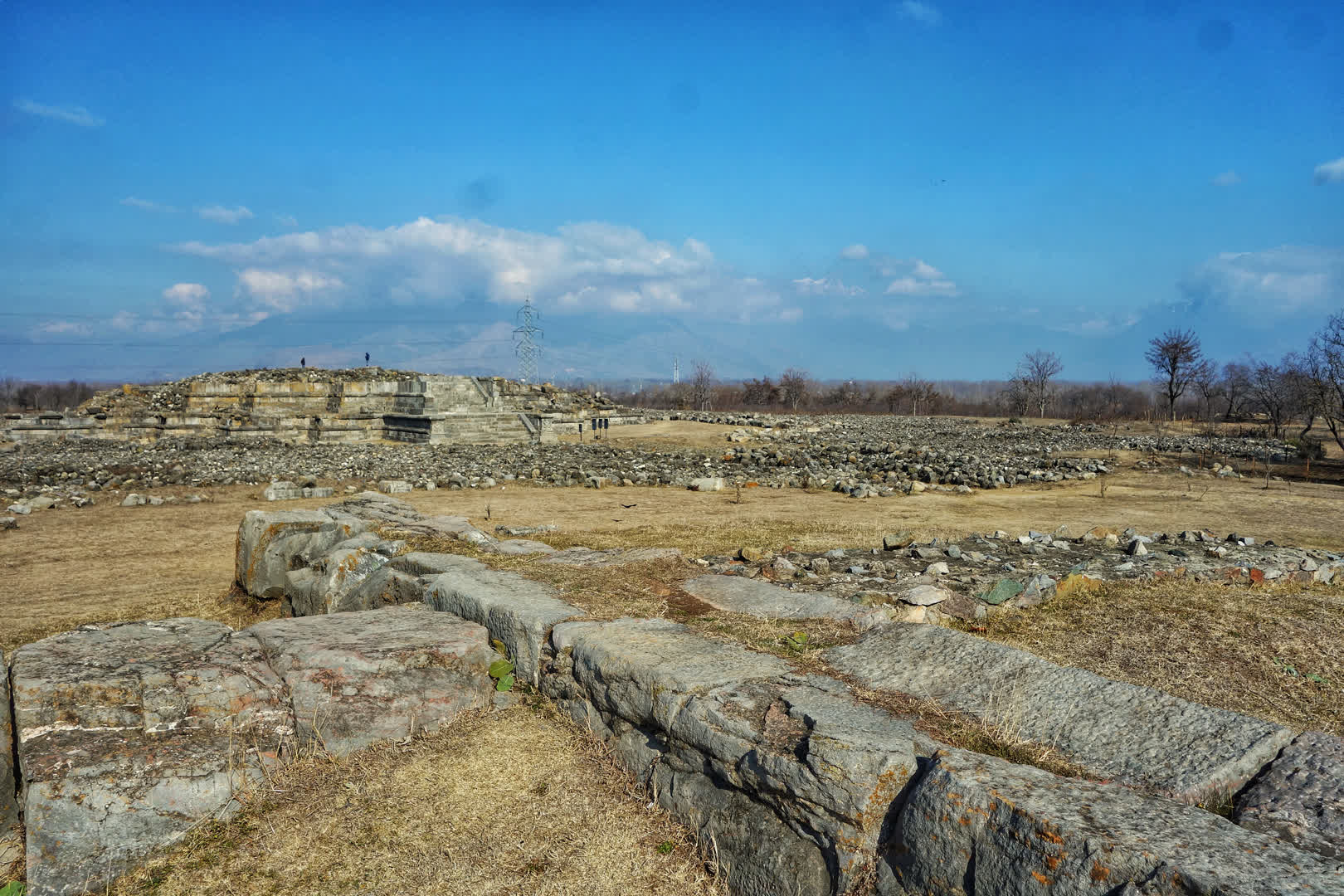 Another view of Parihaspora | Author

The vast wealth generated by his conquests enabled Lalitaditya to build a number of magnificent monuments across Kashmir, including a new capital city called ‘Parihaspora’ or ‘City of Smiles’. Located on the Karewa Plateau above the point where the Jhelum met the Sind River, it was a magnificent setting with the Haramukh, the reigning peak in the Valley, standing tall before it. It had amazing views of the Valley and the mountains all around. Apart from this new city, Lalitaditya also built the Sun Temple at Martand as well as the great temple complex at Wangath in Naranag, whose remains are in slightly better shape.

Lalitaditya moved the royal residence to Parihaspora and built a palace, temples and a Buddhist monastery here, while Srinagara continued to serve as his administrative capital. 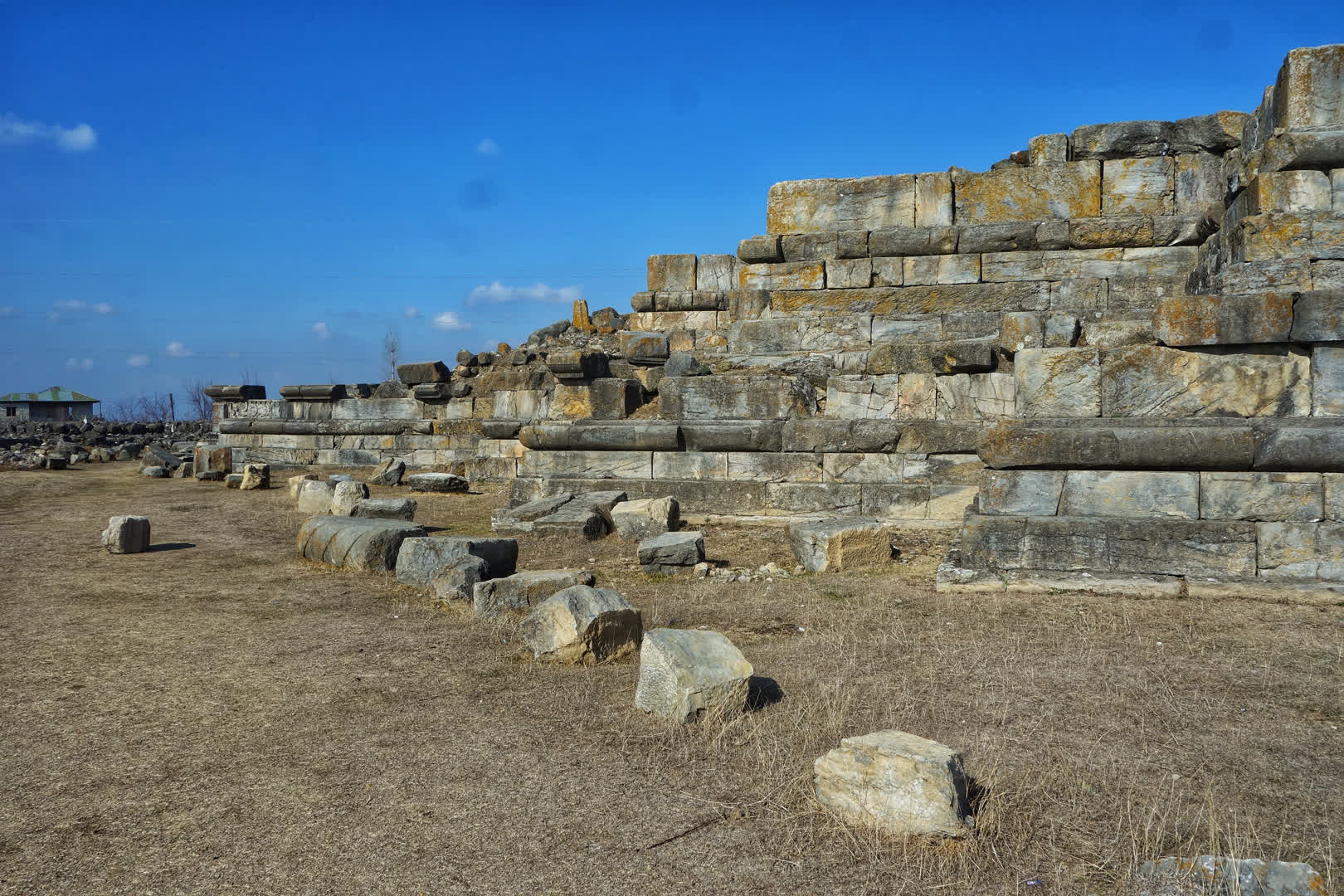 This was the Golden Age of Buddhism in Kashmir but it existed in a syncretic alliance with Vedic beliefs. In stanzas 194-203 of Rajatarangini, Pandit Kalhana talks about the magnificence of Parihaspora, rivalling the capital of ‘God Indra’. He also talks about a Vishnu statue made of 36,000 kg of silver, and a Buddha statue of 62,000 kg of copper, among others that were located here. Though full of hyperbole and exaggeration, Pandit Kalhana’s description of Parihaspora in Rajatarangini gives us an idea of the temples built by Lalitaditya in the city: 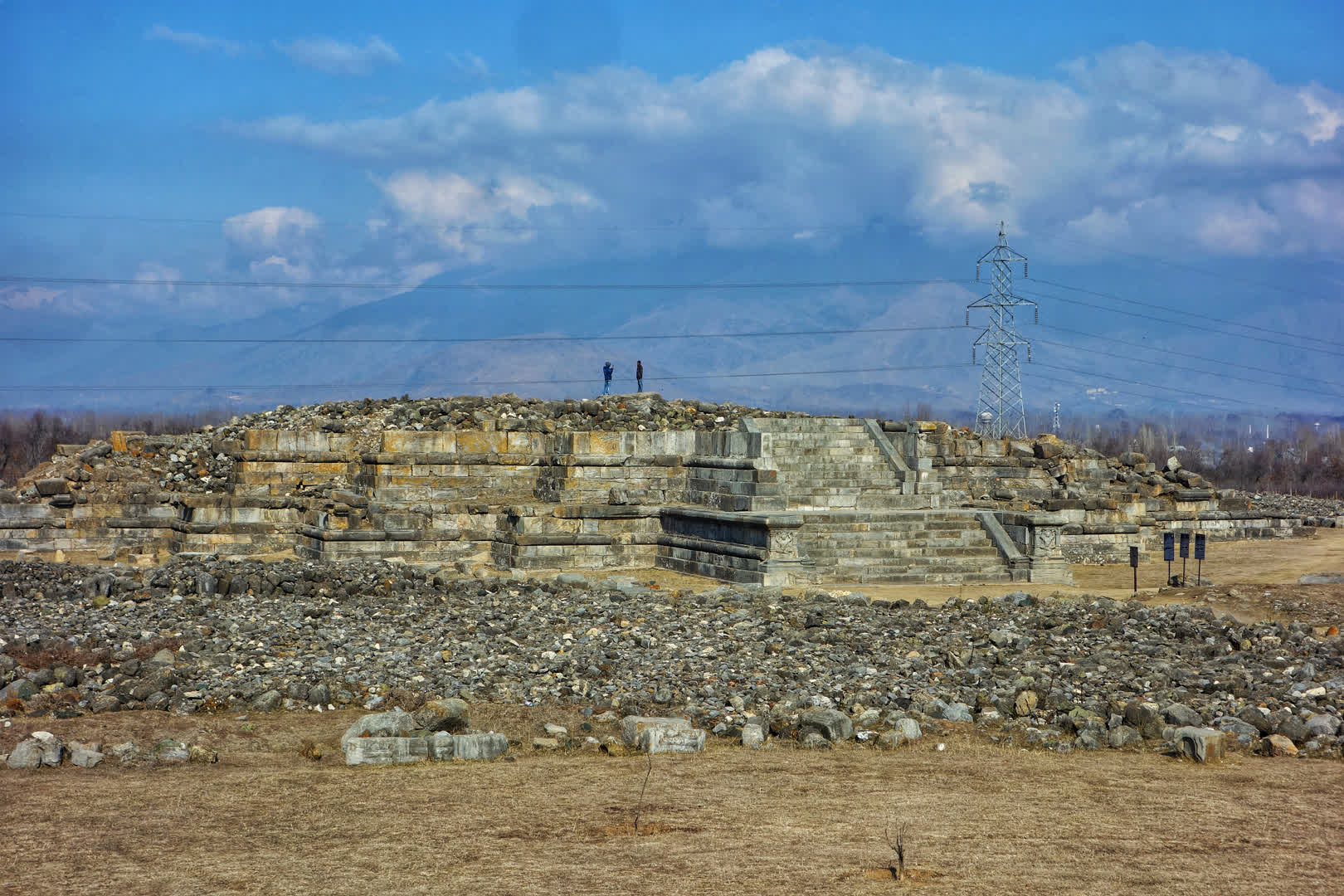 Another view of the platform | Author

Lalitaditya was also extremely proud of his new capital. Pandit Kalhana writes (Stanzas 310-314) how, on one occasion while staying at Parihaspora, the king, being intoxicated with wine, ordered the ministers to burn the city of Pravarapura (old name of Srinagar city), founded by an earlier ruler King Pravarasena, so that it would not rival his own. While the deed was carried out, he later bitterly regretted his decision and was filled with remorse.

Lalitaditya passed away in 760 or 761 CE. (some historians believe that he died on one of his Central Asian expeditions). Sadly, his city that he was so proud of, did not survive for long. His son and successor Kuvalayapida decided to move the capital back to Srinagar. It is even claimed that his engineers changed the course of the Jehlum river so that Parihaspora no longer had access to water. Soon Parihaspur, had little to smile about. Its decline was rapid. 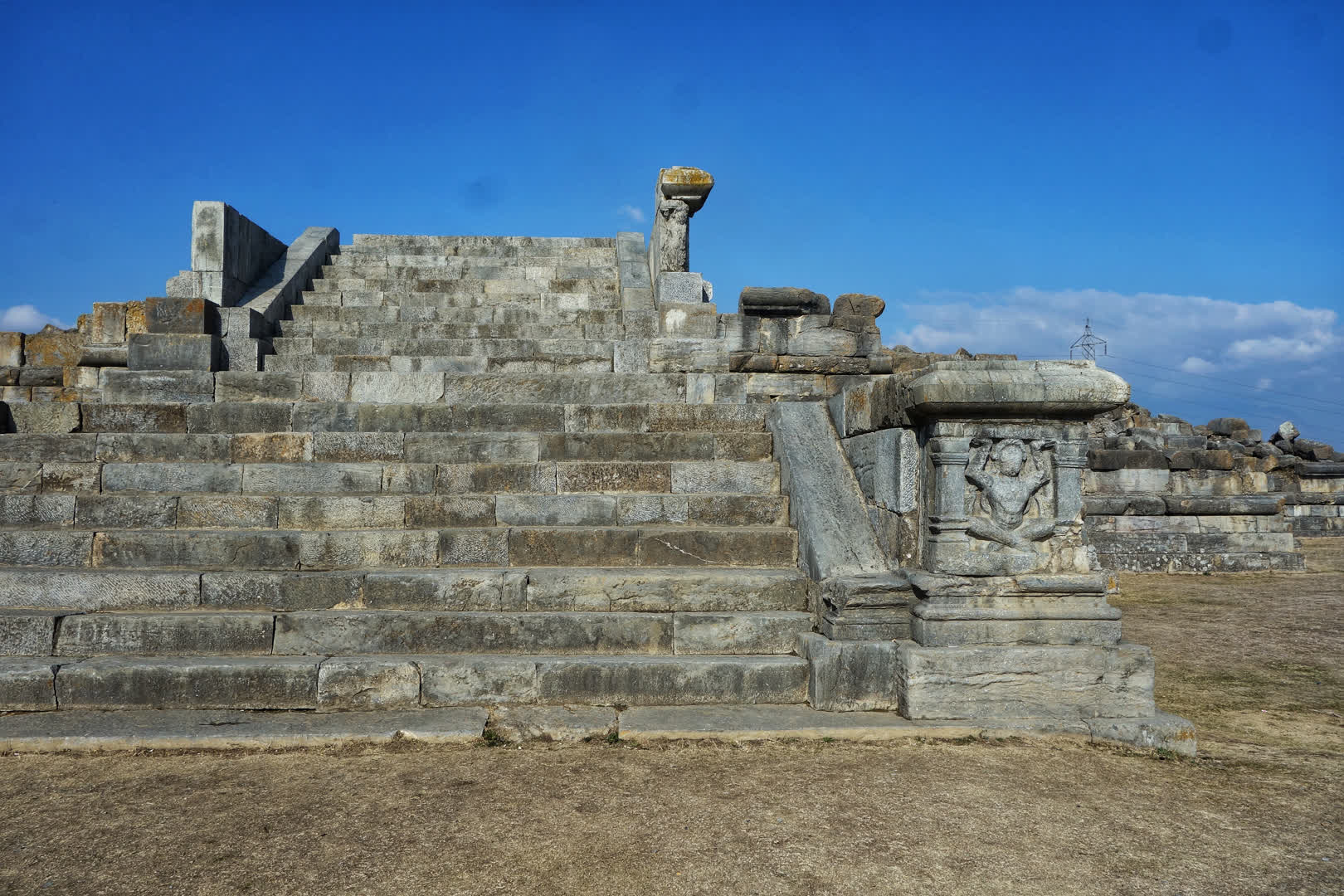 The stairs to the temple | Author

Centuries later, King Avantivarman (r. 855-883) moved the capital to a new city called Avantipora and built two magnificent temples there. However, his son, Shankarvarman, decided to move the capital to Shankarpura (Pattan in the present day district of Baramula) and built a couple of temples here.

Pandit Kalhana wrote bitterly about how the wealth and industry of Parihaspora was shifted to Pattan. In Rajatarangini, he notes, “The petty-minded king [Shankarvarman], in order to make his own city celebrated, carried away everything of value belonging to Parihasapura. Cloth weaving, sale and purchase of livestock and similar things, which were the basis of the fame of Pattana, were once in that very city [Parishaspora].” (Stanzas 161-162)

Parihaspora had already been in a state of decline but worse still, subsequent rulers cannibalised stones from the Parihaspora Complex for the new temples they built. This is one of the reasons we see a large number of stones strewn around the site today.

As if that wasn’t enough, another king, Harsha (r. 1089-1111 CE), decided to burn down Lalitaditya’s Parihaskeshava temple and a Buddhist monastery, after he suspected that one of his rivals was hiding in them. Parihaspora was now a deserted, crumbling network of edifices and what remained was destroyed by Sultan Sikandar in the 14th century. That’s why we see very few carvings of human figures in the ruins. 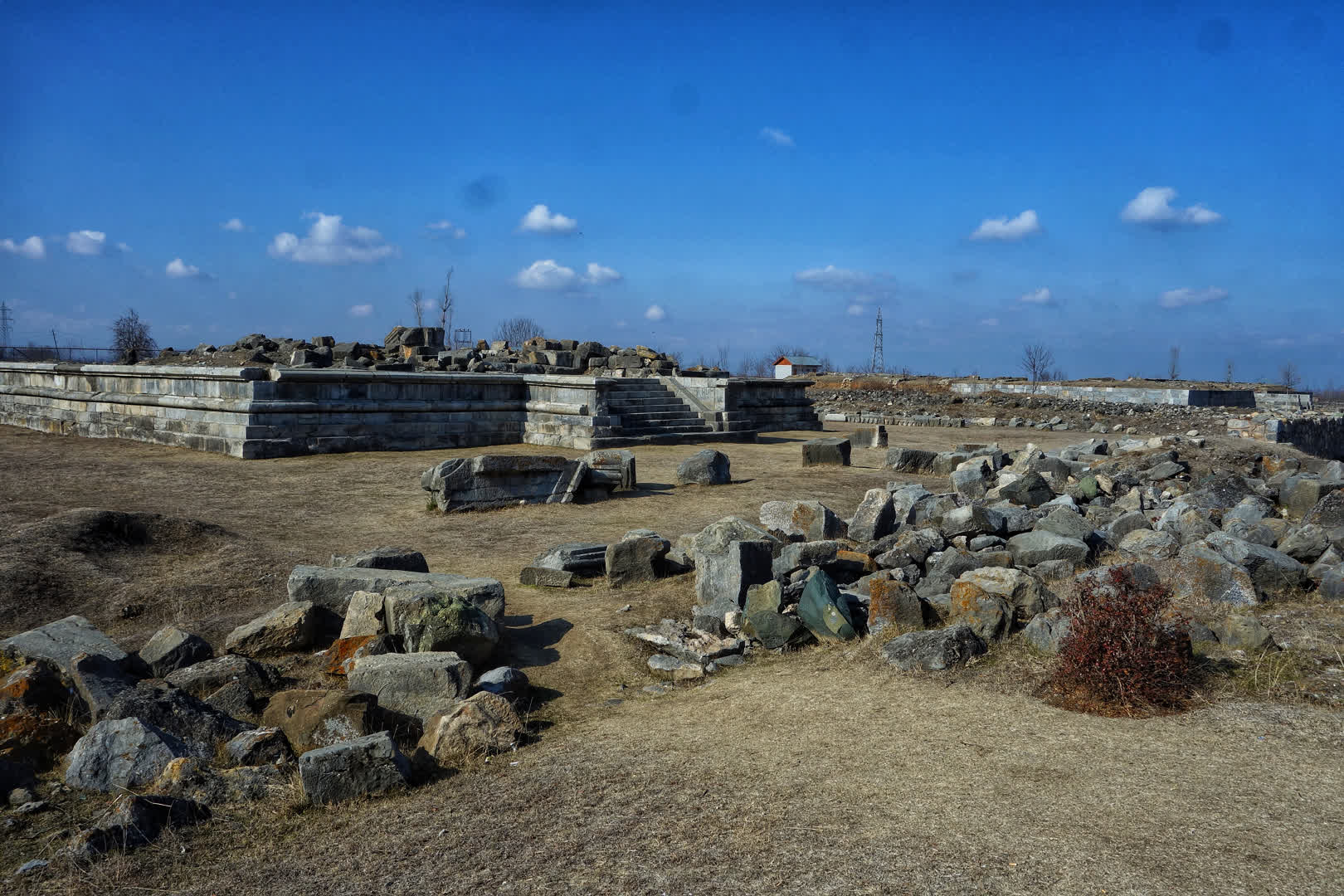 But the plunder didn’t end there. Auriel Stein, the Hungarian Indologist who translated Kalhana’s Rajatarangini, also visited the site twice in 1892. Between his two visits, he noticed that a large number of sculptures and stones were missing, and decided to find out why.

It turned out that the then Maharaja of Jammu & Kashmir was building the Jhelum cart road to connect Srinagar with Rawalpindi and stones from Parihaspora were being used in its construction! Incredibly, a thousand years after this great city was abandoned, stones were still being carted away to be used in building projects elsewhere.

Stein was deeply disturbed by this and approached the British Resident at the Court of the Maharaja so that he could discuss the matter with the Maharaja. He succeeded in his mission, and we have Stein to thank for the what remains in the ruins that we see at Parihaspora today. 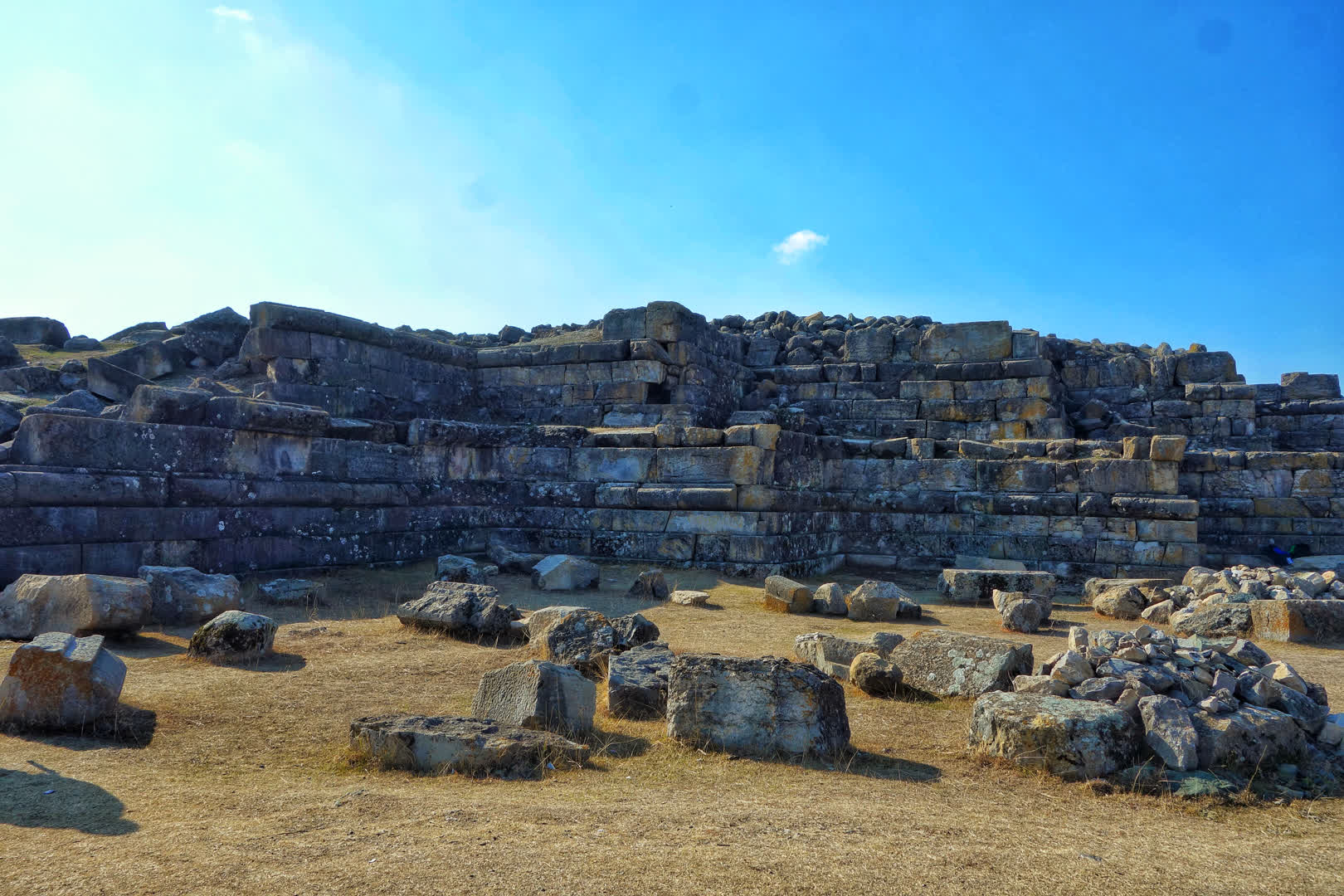 While there is no doubt that this was once a grand city, one fit for a king, historians differ on the structural ruins that survive. According to a report published by the Archaeological Survey of India, the existing bases and plinths in Parihaspora are the following structures:

(1) Ancient Stupa: On the north-eastern corner of the plateau is the stupa of Cankuna, the Central Asian minister of Lalitaditya.The base of the stupa is square, with offsets and a flight of steps on each side. The broad surface at the top of the plinth served as circumambulatory passage. The superstructure is lost and some architectural fragments like torus and trefoil arches are lying at the site.

(2) Ancient Monastery: Built by Lalitaditya (724-760 CE), the large, square structure is a rajavihara or royal monastery. The four sides of the courtyard are enclosed by 26 cells. The cells have a verandah in front with a high plinth. A couple of stone drains and a large stone trough can be seen among the remains. Silver coins in an earthen jar were found in one of the cells.

(3) Ancient Chaitya: Built by Lalitaditya (724-760 CE), the chaitya or prayer hall stands on a two-tier base. It has a square sanctum surrounded by a circumambulatory passage. A flight of steps on the east side leads to the entrance. 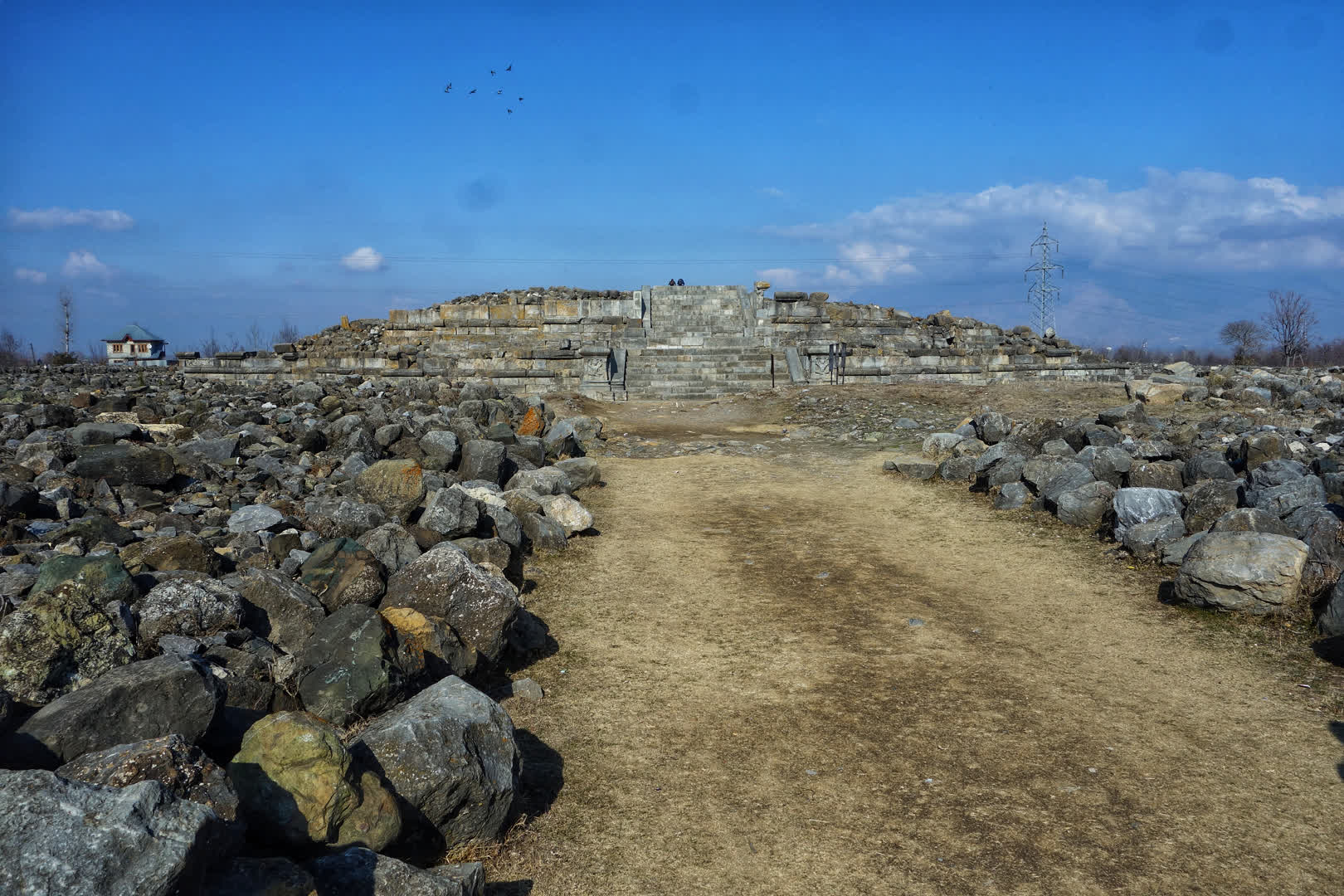 Stones scattered around the area | Author

To this day, Parihaspora has a haunting presence and, if you go there armed with a bit of history, it is easy to imagine what it must have been like in the 8th century. King Lalitaditya must have stood in this very spot, on the edge of the Karewa Plateau, marvelling at the glorious capital he built ,while contemplating his next conquest.

Today, there is little built-up evidence of Lalitaditya’s splendid city; only a disassembled version of the conqueror’s dream. Hubris, they say, has a short shelf-life, for it didn’t take long for the Gods to turn his City of Smiles into a City of Stone.

Parihaspora is located around 25 km from Srinagar, a few kilometres off the Srinagar-Baramulla Road. One can easily visit the site by taking a short detour en route from Srinagar to the very popular resort town of Gulmarg.