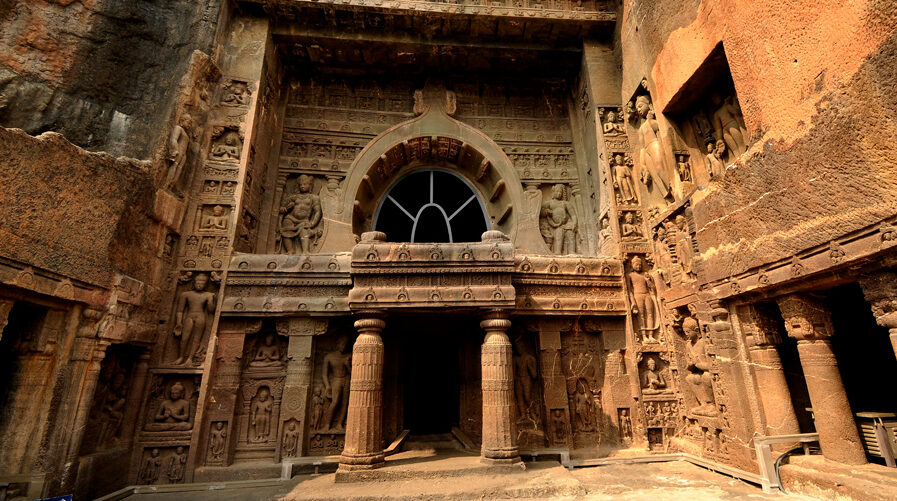 It is hard to imagine Washim as anything but a nondescript town in Maharashtra, yet it was the seat of the King who built the world-famous Ajanta Caves. Catch the story of one of the Deccan's most powerful but forgotten dynasties, in Part II of our series on the Vakatakas

‘Washim’ is a name that few Indians have heard of. Located around 215 km east of Aurangabad city, in Washim district of Maharashtra, it is like any other Indian town with haphazard constructions, bazaars and traffic. So it is hard to imagine that more than 1,600 years ago, this was the fabled city of Vatsagulma, capital of one of the richest kingdoms in India of its time, the Western Vakatakas.

And yet, the Western Vakatakas, one of ancient India’s most important dynasties, would have been forgotten had it not been for their greatest construction – the Ajanta Caves.

Lakhs of tourists and pilgrims from around the world visit these caves each year. But few know of the Western Vakataka dynasty without whose patronage this marvel of Indian art would not have been built.

What is even more interesting is that the Vakataka kings were Hindu Shaivites and yet endowed the most magnificent Buddhist caves complex ever built in India.

The story of the Vakatakas begins far from the lands they would rule, in the region of Bundelkhand, which straddles parts of present-day Uttar Pradesh and Madhya Pradesh. Historian A M Shastri in his book The Age of the Vakatakas (1992) identifies their origin with the village of Nachna or Nachna-kl-talai in Panna District of Madhya Pradesh. The founder of the dynasty was a ruler named ‘Vindhyashakti’. 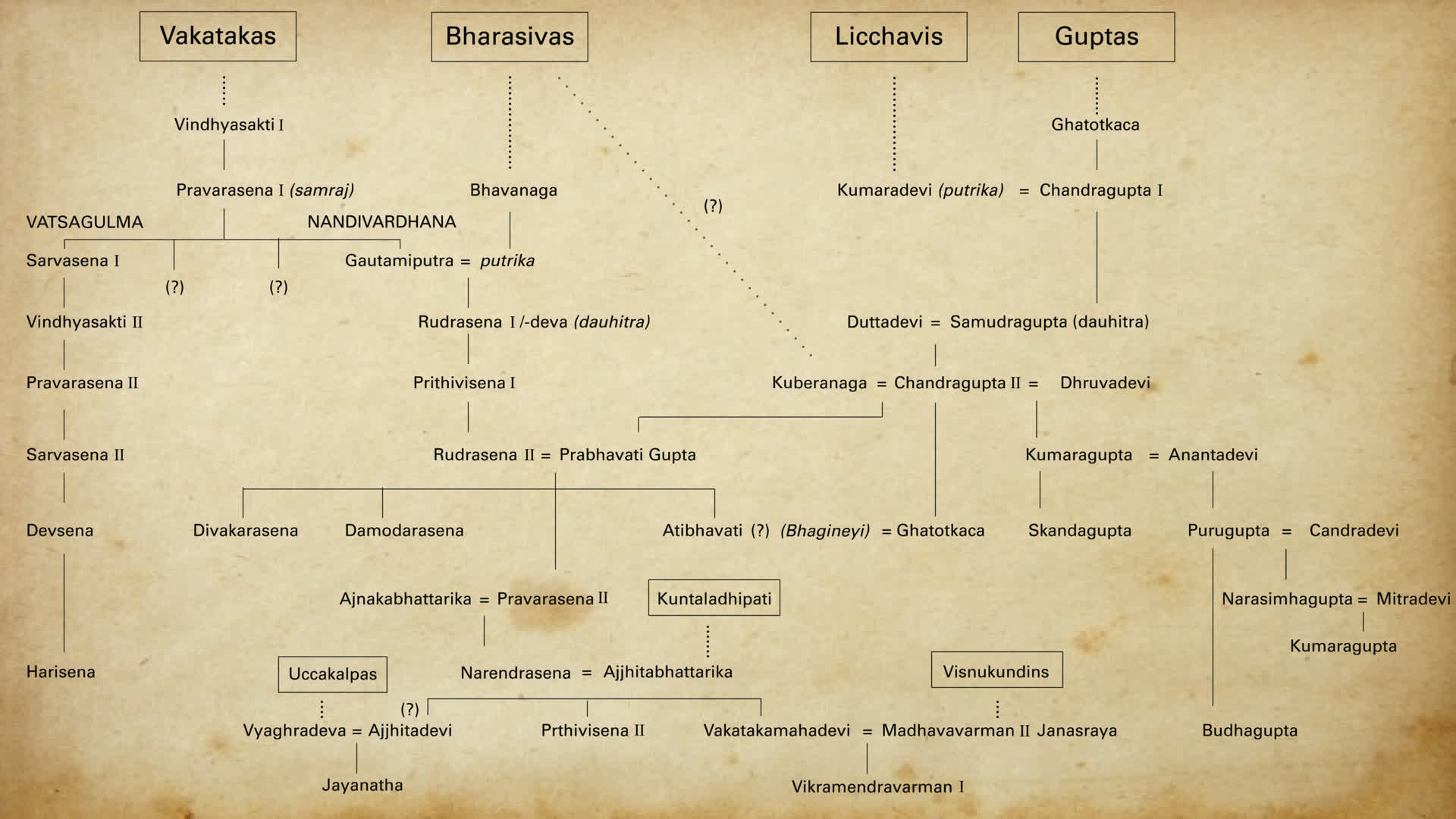 Some time around the middle of the 4th century, when Gupta Emperor, Samudragupta, established his rule over Bundelkhand, a section of the Vakataka army and nobility, under King Rudrasena I, travelled down the Dakshinapatha and established their capital in Nandivardhana (40 km north-east of present-day Nagpur city), and founded the Eastern Vakataka dynasty.

Meanwhile, Sarvasena I, grandson of the dynasty’s founder Vindhyashakti I, established his own kingdom in Vatsagulma (Washim), south-west of Nandivardhana and 215 east of Aurangabad city, on what is today called the ‘Ajanta Plateau’. His descendants were known as the ‘Western Vakatakas’. The Wardha River served as the border between the two kingdoms.

Historically, the Wardha River was always considered the dividing line between the two regions of Vidarbha. The area to the east of the river was the ‘Jungle Prant’ known for its thick forests and tribes, while the west was what was then considered a ‘civilized’ area, noted for its rich black soil, thriving cities and trade routes. This demarcation would continue till as late as the mid 18th century, when the Maratha rulers of the Bhonsle dynasty made Nagpur (in the heart of Jungle Prant) their capital and encouraged settlers to cut forests and ‘civilise’ the area.

This regional difference was reflected in the kingdoms of the Eastern and Western Vakatakas. Noted historian Hans Bakker in his book The Vakatakas (1997) writes extensively about the marked difference between the two kingdoms, which can be seen in epigraphical evidence. While the inscriptions of the Eastern Vakataka dynasty speak of kings who are praised for their upright, reliable and solid rule and were considered ‘the paragons of the dharma’, the inscriptions of their relatives – the Western Vakataka dynasty – tell a very different story.

While the Western Vakataka kingdom was considerably smaller than its Eastern counterpart, it derived great wealth due to its income from international trade, thanks to its control over a large swathe of the Dakshinapatha, the trade route that connected the cities of the North, such as Pataliputra and Takshashila to the great cities of the South, such as Paithan and Kanchi. The murals in the Ajanta Caves have depictions of numerous foreign figures such as the Chinese, Greeks and Persians, who were perhaps traders or travellers in this region. 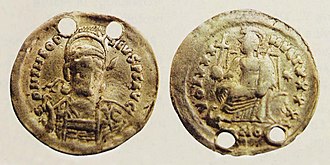 Coin of Byzantine Theodosius II, found in the excavation of a monastery in Ajanta Caves | Wikimedia Commons

One of the most extraordinary discoveries at the Ajanta Caves was a coin of Byzantine Emperor Theodosius II (402–450 CE). No one has a clue to how it travelled from Constantinople all the way to the hills of Ajanta. Perhaps it was a donation by a merchant or a king. But it does tell us of the international links this region of today’s Maharashtra had at that time.

Interestingly, the Western Vakataka capital Vatsagulma finds mention not just in the Hindu epic the Mahabharata, but even the famous text KamaSutra by Vatsayana, who called it ‘the pleasure resort of Kamadeva’.

We find references to the city being a great centre of learning, as late as the 10th century CE (almost 500 years after the Vakatakas). Sadly, nothing of the old Vakataka capital remains, probably because most of the palaces and other buildings were made of wood.

Little information is available either in the form of epigraphical or archaeological evidence with regard to the early rulers of the Western Vakataka dynasty. The only inscription that provides a firm chronological basis for the Western Vakataka dynastic history is something known as the ‘Hisse-Borala inscription’. This inscription, dated to 457-58 CE, was found near the remnants of an ancient dam in the vicinity of the Hisse-Borala village around 10 km south of Washim town ( Vatsagulma). It records ‘the construction of a water storage (saras) called Sudarsana by a noble called Svamilladeva for the welfare of all living beings‘. It also has the earliest reference to the ‘Saka Era’ in the Deccan.

Interestingly, this noble ‘Svamideva’ also finds mentions on the Vakataka land grant inscriptions found at Thalner on the banks of the Tapi River as well as on those found in Bidar in Karnataka. This points to the extent of the Vakataka domain. Also, each of these three inscriptions of Svamideva dates to the reigns of three different kings – Sarvasena II, Devasena and Harisena, helping historians piece together the Western Vakataka genealogy.

The greatest ruler of the Western Vakataka dynasty was Harisena, who succeeded to the throne in 460 CE. Renowned historian Dr Walter Spink, who spent six decades studying the Ajanta Caves and their patron, would describe Harisena’s reign as having ‘hardly a rival in the world in terms of its political or artistic achievements’. From the inscriptions found in Cave No 16 at Ajanta, we know that his rule extended across most of Central India, from the Tapi River in the north to Telangana in the south.

While Vakataka rulers were Shaivites, a large part of their population was Buddhist. Dr Spink believes that it may have been Harisena’s Buddhist ministers who prevailed upon Harisena to sponsor the vast Buddhist monastery complex at Ajanta. The Ajanta Caves were an ‘exclusive’ project, with patrons being the ruling elite of the Western Vakataka kingdom. 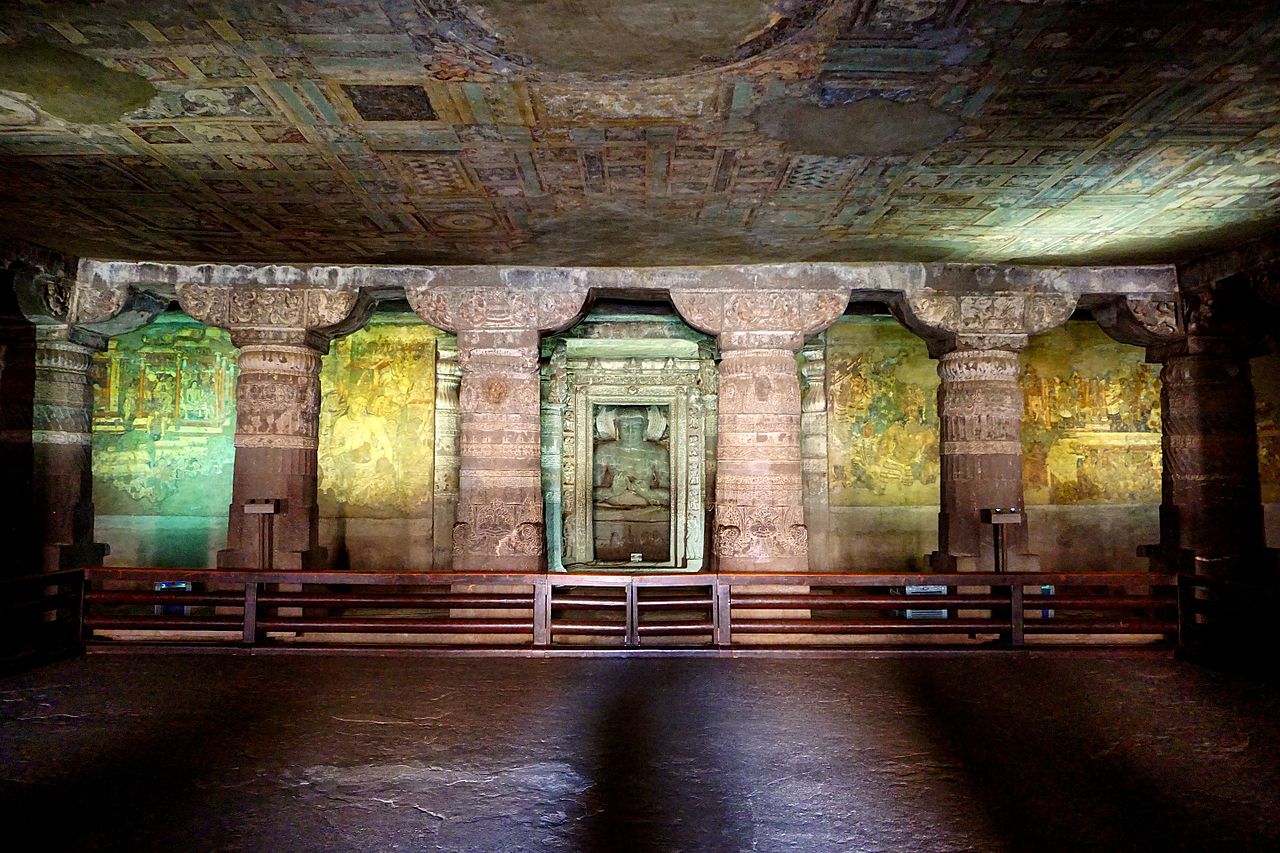 Cave No. 1 of Ajanta, built by Harisena | Wikimedia Commons

In 466 CE, the work began on Cave No 1 at Ajanta, popularly known as ‘Harisena’s Cave’ as it was endowed by him. This is the most richly decorated cave in the complex. But all was not well in Harisena’s kingdom. Between 471 and 474 CE, the chieftains of the Asmakas (Telangana region) and Rishikas (Khandesh in Maharashtra) led insurrections against the Vakataka rule. During this period, most of the workers and artists here moved to the Bagh Caves near Mandu in Madhya Pradesh, where they built a magnificent cave complex very similar to the one at Ajanta. Sadly, due to the poor quality of rock, almost nothing has survived there.

While construction of the royal caves at Ajanta restarted in 475 CE, it would halt dramatically in 477 CE. In the words of Dr Spink, in his seven-volume magnum opus Ajanta (2005),  ‘At  the very moment that ‘there was hardly two weeks’ more work to do [on the Ajanta caves], and that on the murals alone, [Harisena] died from a heart attack or a stroke, or (considering the perverse machinations of the Asmakas) it may have been by poison or the knife.‘

Dr Spink as well as another noted historian V V Mirashi argue that the dramatic end of the Western Vakatakas after Harisena’s sudden death in 477 CE, was such an important event in those times that it was recalled, blow by blow, by noted Sanskrit playwright Dandin’s quasi-historical Dasakumaracarita (Story of Ten Princes), in the eighth chapter (Visruta Carita), almost a century after the events actually happened. Apparently, Harisena met his mysterious end in a plot organized by his feudatory, the Asmakas.

Dr Spink explains that as per Dandin, the son of an Asmaka Minister, “under the pretext of being expelled by his father for his profligate conduct, came to the unsuspecting court of Harisena’s weak successor, Sarvasena III, with a numerous train of musicians and dancing girls… and numerous retainers and spies in various disguises where he successfully corrupted the young king with wine, women, and song, along with pernicious political counsel.”

This ‘mole’ in the Vakataka establishment encouraged Harisena’s son Sarvasena III to wage a war with the Asmakas, where he was treacherously betrayed and killed.

Sarvasena’s widow and minor children took refuge in the Kingdom of Mahismati (Maheshwar in Madhya Pradesh). The Asmakas could not manage their new conquests and the Vakataka Empire splintered. This ended the rule of the Western Vakatakas.

But other Vakataka historians like Hans Bakker and Dr Arvind Jamkhedkar dispute the quasi-historicity of Dandin’s dramatic events relating to the fall of the Vakatakas, due to the unavailability of substantiating independent evidence.  They believe the reasons for the sudden end of Western Vakataka rule by 480 CE, are still to be discovered.

Approximate extent of the Vakataka territories in 450 CE | Wikimedia Commons

Interestingly, the fall of the Western Vakataka kingdom came almost at the same time as that of the last powerful Gupta Emperor, Skandagupta, who died in 470 CE, and soon the Gupta feudatories began to assert their independence. During Harise’a time, the remnant of the Eastern Vakataka kingdom was ruled by his distant relative, King Narendrasena, who too died around 470 CE.

Hans Bakker believes that Narendrasena’s son, Prithvisena II may have played a role in the destruction of the Western branch of the family. But it is believed that soon after Prithvisena II, the Vishnukundins of Andhra Pradesh, who ruled from Guntur, took over the Eastern Vakataka kingdom. The ‘Age of the Vakatakas’ had truly ended.

Even the cave complex at Ajanta was abandoned and forgotten. It was rediscovered only in 1819, when British army officer Captain John Smith stumbled upon the caves during a hunting expedition.

By the late 19th century, the beauty of the Ajanta murals became a sensation around the world and a muse for Indian art and, almost immediately, tourists from all over the world were visiting Ajanta. This also drew the interest of historians and Indologists to the history of the Western and Eastern Vakatakas.

Today, the history of the Vakatakas is still being rediscovered.

Read Part I of the story of the Vakatakas here.