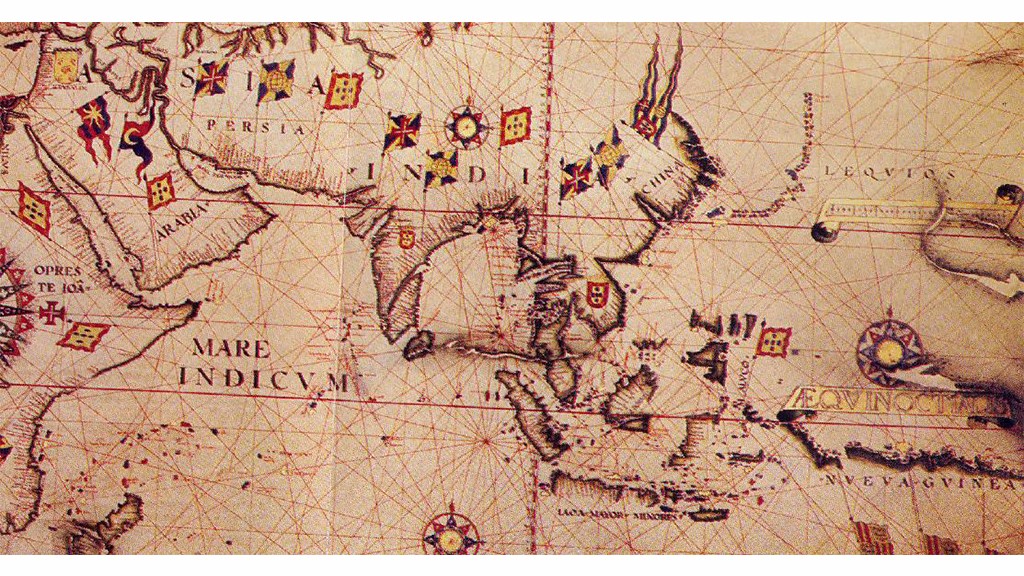 On 20th of May 1498, Vasco da Gama disembarked from his Nau (Portuguese ship) in Kappakadavu, Kerala and marked the beginning of a long chapter that would tie the history of the Indian continent to far-off Portugal inextricably. The Portuguese, the first to find the sea route to India (thanks to Vasco da Gama) were among the earliest European traders to come here. And even though they lost out to the British as a colonial power, it is amazing how they have left their influence in our everyday lives.

The Portuguese would end up colonising the Indian sub-continent from 1505 – 1961 CE.

From the 16th – 18th century CE Portuguese settlements dotted the East and West coast of India. The list was long Cochin (Kochi), Goa, Dadra and Nagar Haveli, Diu, Bombay, Salsette, Kannur, Kollam, Tangasseri, Daman, Chittagong, Bandel, Vasai (Bassein), Satgaon (Hooghly) and Dhaka. This was also the time when Portuguese sailors were going far, into the Americas and parts of Africa As they settled in these port towns they also brought in many new delicacies.

This colonization created a new, hybrid culture. In fact, strains of the Portuguese influence can be seen even today, especially in food. Here are some of the most delicious foods we have the Portuguese to thank for! 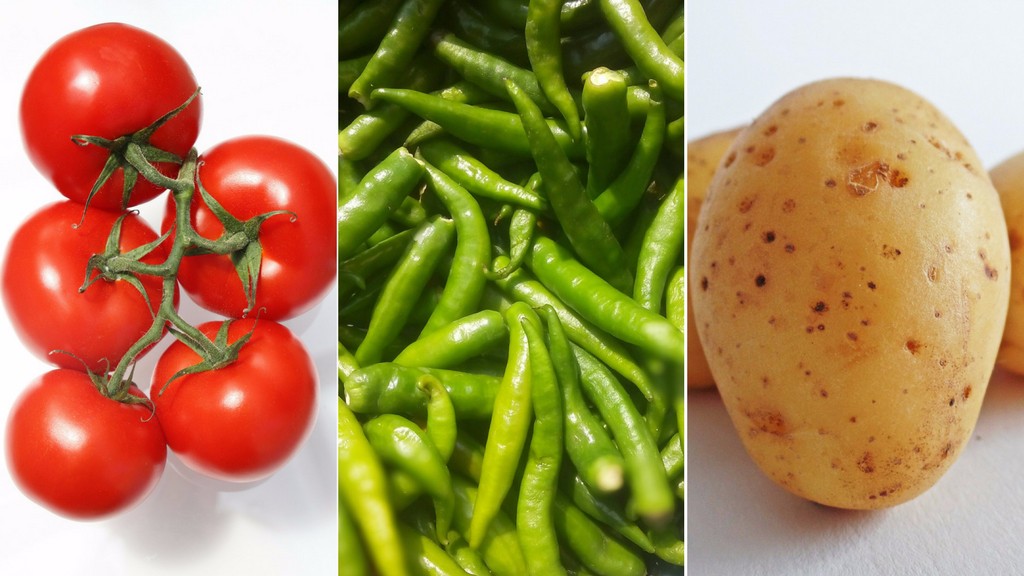 Fruits and vegetables brought by the Portuguese to India | Pixabay

The most significant contribution of the Portuguese has been the variety of fruits and vegetables that they introduced to the Indian land. Many of the most common fruits and vegetables consumed in India today, came with the Portuguese. These include potato, tomato, tapioca, groundnuts, corn, papaya, pineapple, guava, avocado, rajma (kidney bean), cashew, chikoo, capsicum and even the chilli. 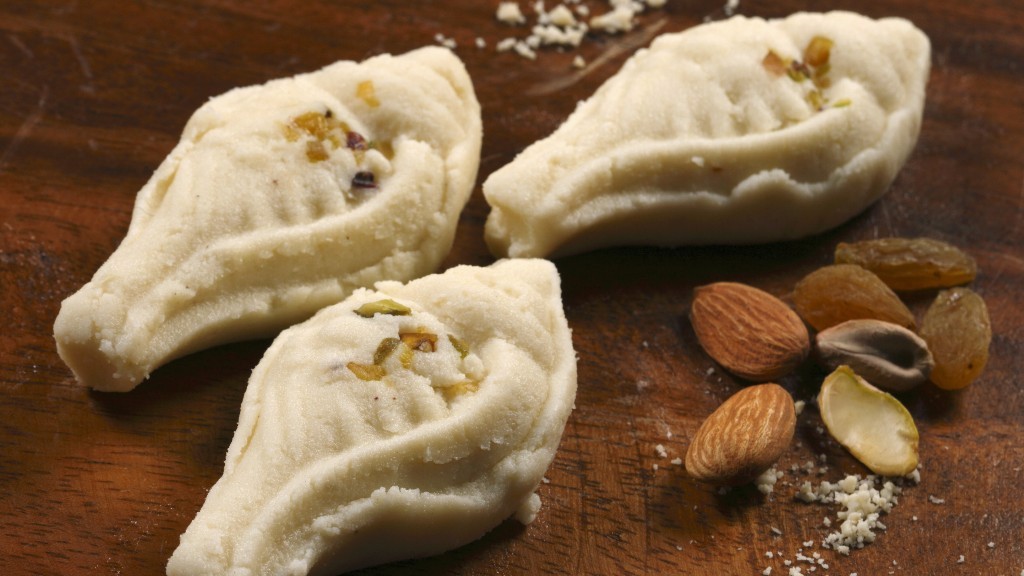 Not just spicy chillies, even some of the most popular sweets in India have Portuguese connections and this can be attributed to the chenna, which gave rise to a new chapter in Indian cooking. Made from split milk, chenna is the base preparation for several well-known foods today, including the paneer. Prior to this introduction, the practice of splitting of milk had been considered taboo in Hindu traditions.

The sandesh & the rasagulla owe their origins to the Portuguese

After being defeated by the Mughals in 1633 CE, the Portuguese retreated to Bandel, a small area on the outskirts of the Hooghly settlement. Having suffered heavy losses, the settlers were compelled to employ local cooks from India and present day Burma. These workers learnt the curdling technique and used it in their every-day cooking, making way for innovations in food. One of the more remarkable creations is the now rare Bandel cheese which is said to have been made by Burmese cooks under the supervision of their Portuguese employers. The popularity of chenna led to several other innovations, notably the sandesh and rosogola (rasagulla). 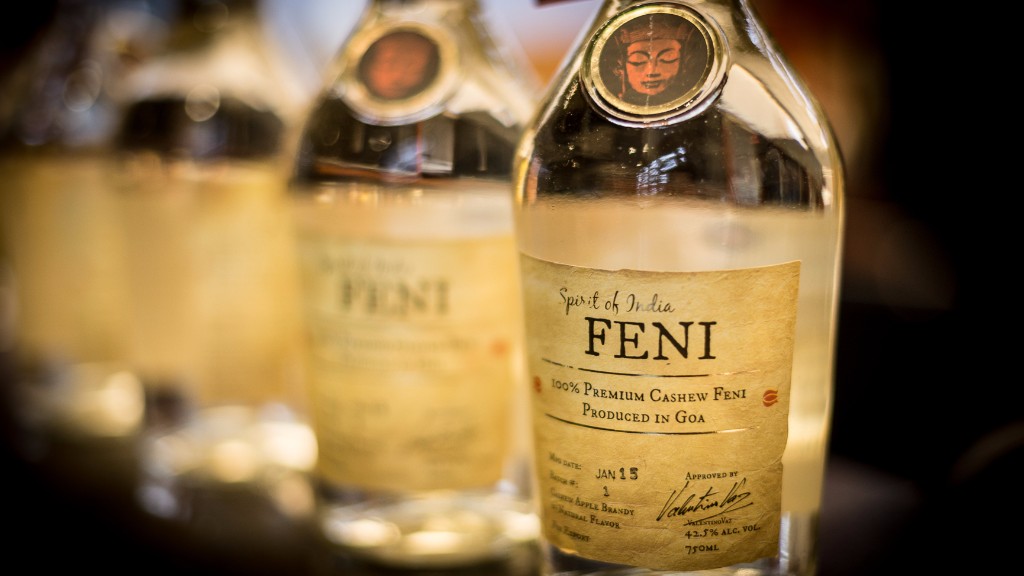 Feni is a unique drink native to Goa | fenidrink.com

Across the country, the state of Goa is home to a local tipple that has become famous world over for its distinctive flavour: the strong, pungent and thoroughly unique, Feni. Though it is unclear who started making it first, records of Portuguese settlers suggest that by 1740 CE, this local alcohol was being distilled from cashews. Feni is only made from cashew apples that have ripened and fallen off the tree. This is probably how the drink was first invented, by using the cashew apples that the Portuguese rejected. This also led to constant skirmishes with the Portuguese authorities as the ‘local’ Feni industry cut into their revenues and taxes from regular alcohol. 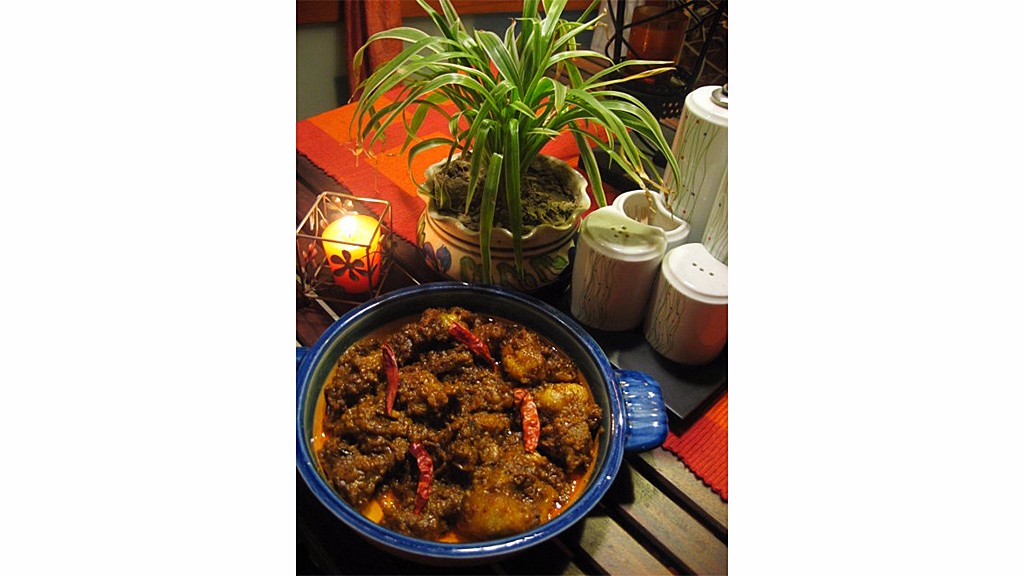 Goa is also known for vindaloo, the sour, fiery hot pork curry made with coconut vinegar, spices and red chillies. This preparation, which has become synonymous with extremely spicy curries in the Western world, is actually one of the best examples of Portuguese influence on Indian food. The vindaloo was Introduced in Goa around 1510 by the Portuguese sailors who travelled with their meat preserved in wine and garlic for longevity. Vinho de alho literally means wine and garlic or meat cooked in wine and garlic. Local garbled pronunciation turned it into vindaloo.

Even the ingredients were modified as locals of other faiths would not consume wine or cook with it. As a result, the natives of Goa who did not use vinegar as a souring agent, used a combination of tamarind and black pepper. Eventually, versatile Franciscan priests would solve the problem by distilling vinegar from coconut toddy, the local alcohol fermented from the sap of the palm tree. Thus, the vindaloo as we have come to know today, is a real amalgam of cultural influences.

Any discussion of the vindaloo is incomplete without the mention of the pav, the Goan bread that accompanies it. Though North India has a history of breads like rotis which were made of whole-wheat before the Mughals introduced maida and naan, the Goan pav came from the Portuguese. According to Lizzie Collingham in her book Curry – A Biography, the Portuguese landed in parts of India where the locals ate rice. But they missed their crusty bread which they also needed for Holy Communion. They could find wheat flour in Goa but yeast was hard to come by. So they started using toddy to ferment the dough and created the pav, which derives its name from the Portuguese pao. Today the pav has transcended the boundaries of Goa to become a much loved and integral part of cuisine across the West coast, riding to fame with all-time favourite snacks like vada pav, pav bhaji and kheema pav. 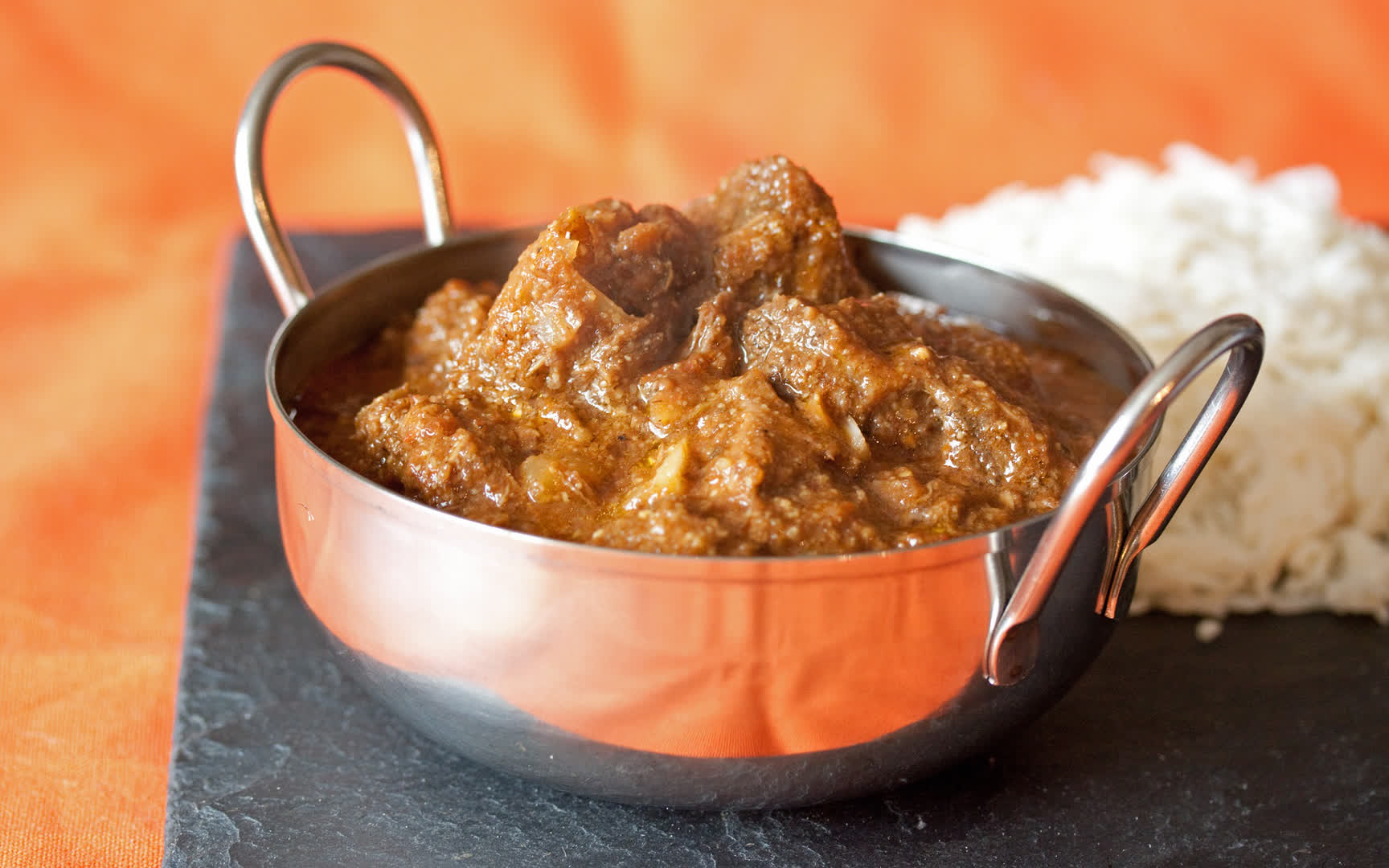 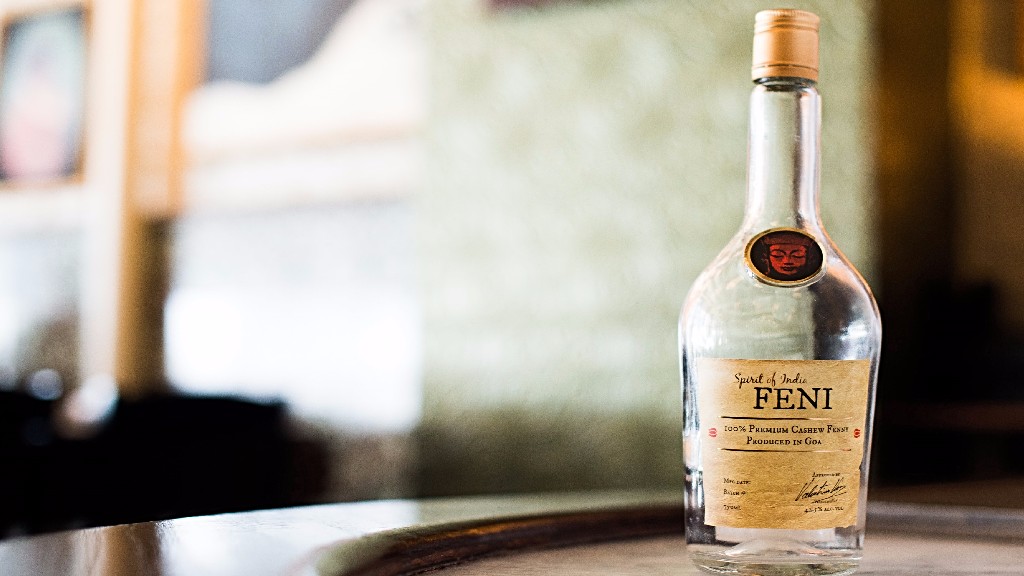 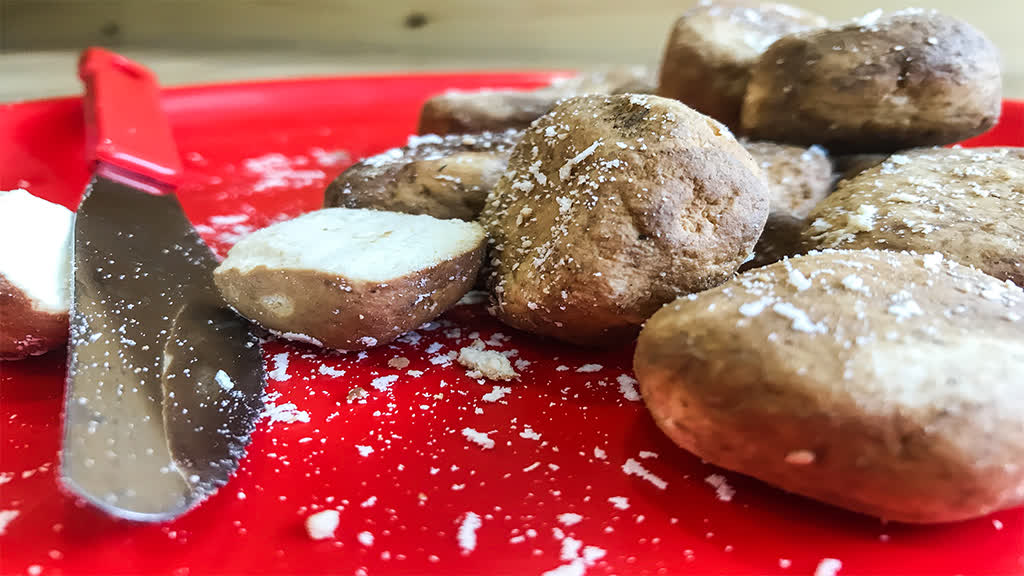 You May Also Like
History in a Dish
Pickle: Preserved by History
By Amrusha Chati

Be it a jar of sour limes, tangy mango or spicy chillies that set your mouth on fire, India’s food pantheon is incomplete without pickles or āchār. We take a look at ancient history to find out how pickles made their way into every Indian household 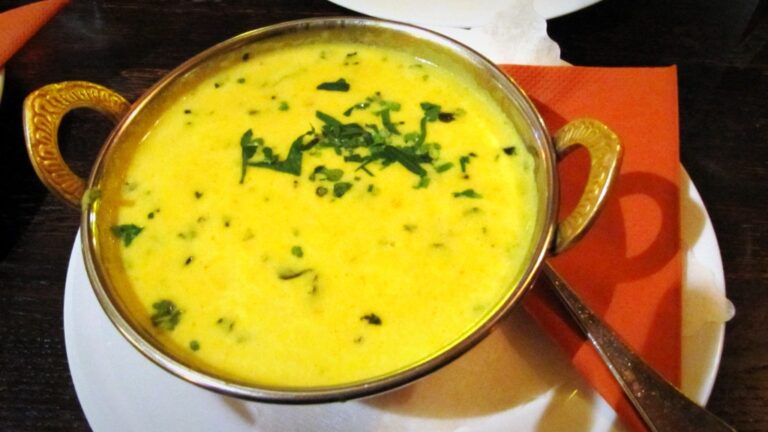 How is the evolution of an empire connected with a soup? Catch the fascinating story of the Mulligatawny soup, which exemplified the heydays of the British Empire in India 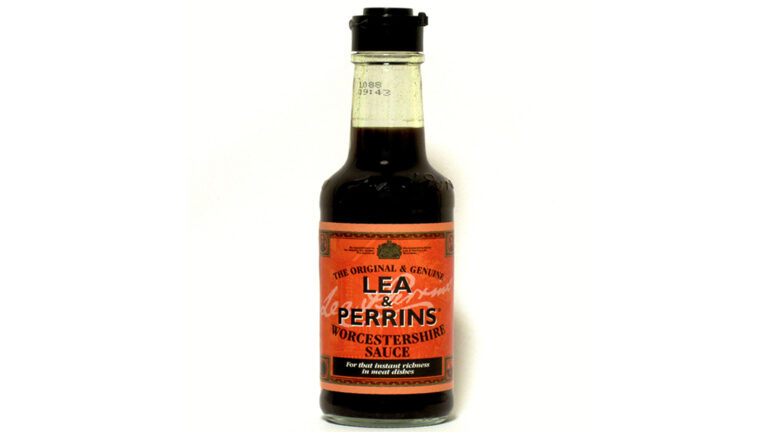