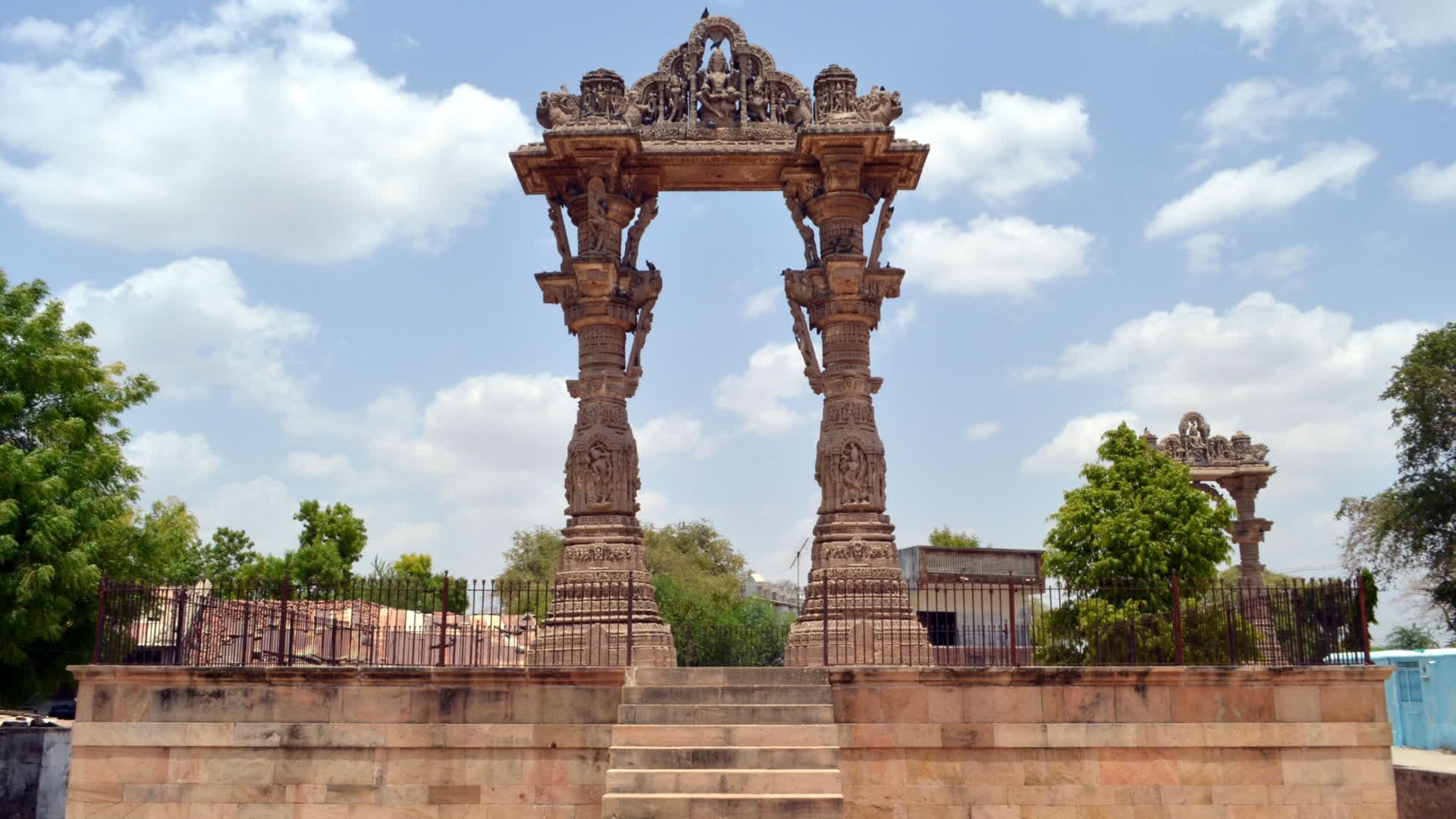 Vadnagar is a small town with a big past. Dating back almost 2,000 years, its ancient and medieval history is a matter of great pride for the people of this town, situated 110 km from Ahmedabad in Gujarat.

Among the relics of Vadnagar’s glory days are two towering Kirti Torans or ceremonial, arched gateways made of stone. Standing 40 feet high on the banks of the Sarmishtha Lake just north of the walled town, these toranas are said to have been built by the Solanki dynasty in the 12th century CE, although no one knows exactly why they were constructed.

Made of red and yellow sandstone and covered in exquisite sculptures, the toranas are reminiscent of Vadnagar’s rich and varied history. The town was an important centre for Buddhism in the later ancient period, and for the Solankis in the early medieval period.

According to some historians and archaeologists, Vadnagar is 2,000 years old.

Archaeological digs in the town have revealed remnants of its Buddhist past, including a Gupta Buddha sculpture, shell bangles and other artefacts, as well as extensive remains of built structures including stupas. 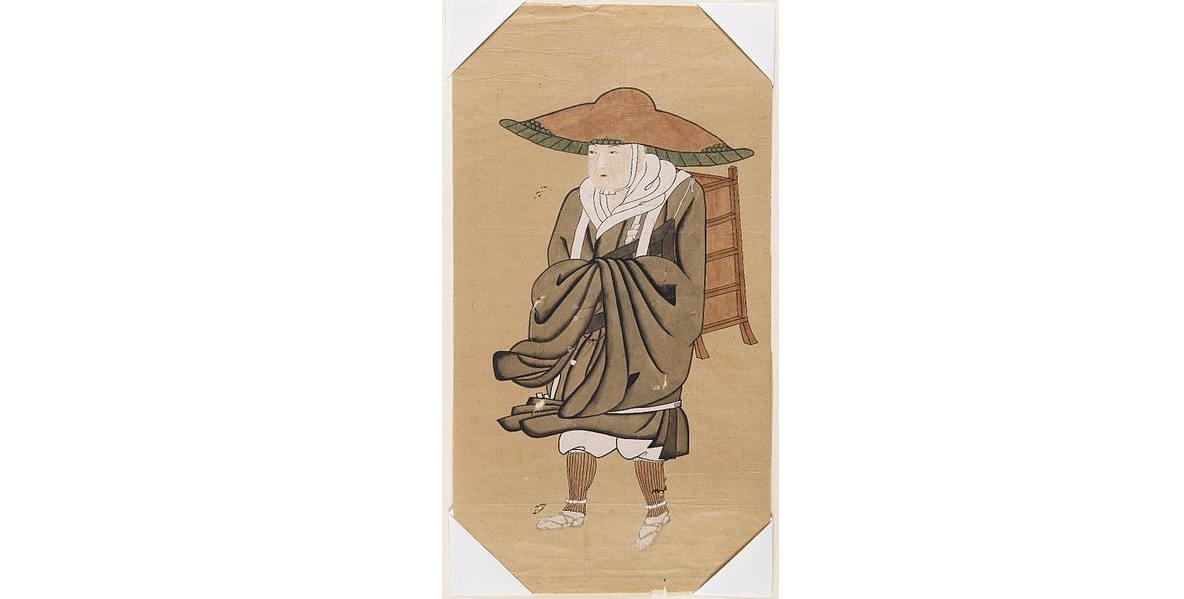 Vadnagar is associated with the ancient town of Anarta mentioned in the Junagadh rock inscription of Kshatrapa King Rudraman I. The town is also believed to be the ‘Anandnagar’ visited and described by Chinese monk and traveller Hiuen Tsang between 640 and 644 CE. This has been supported by archaeological findings. In the 12th century, Solanki king Kumarapala erected walls around the town and it is believed that there were over 3,000 temples here in medieval times.

Kirti Toranas can be found across Gujarat, including some in the towns of Modhera and Siddhpur. However, the toranas at Vadnagar are the most complete and exquisite of them all. These arched gateways appear to serve no actual purpose, except ornamentation and a means to display the glory and aesthetic accomplishment of the Solankis. 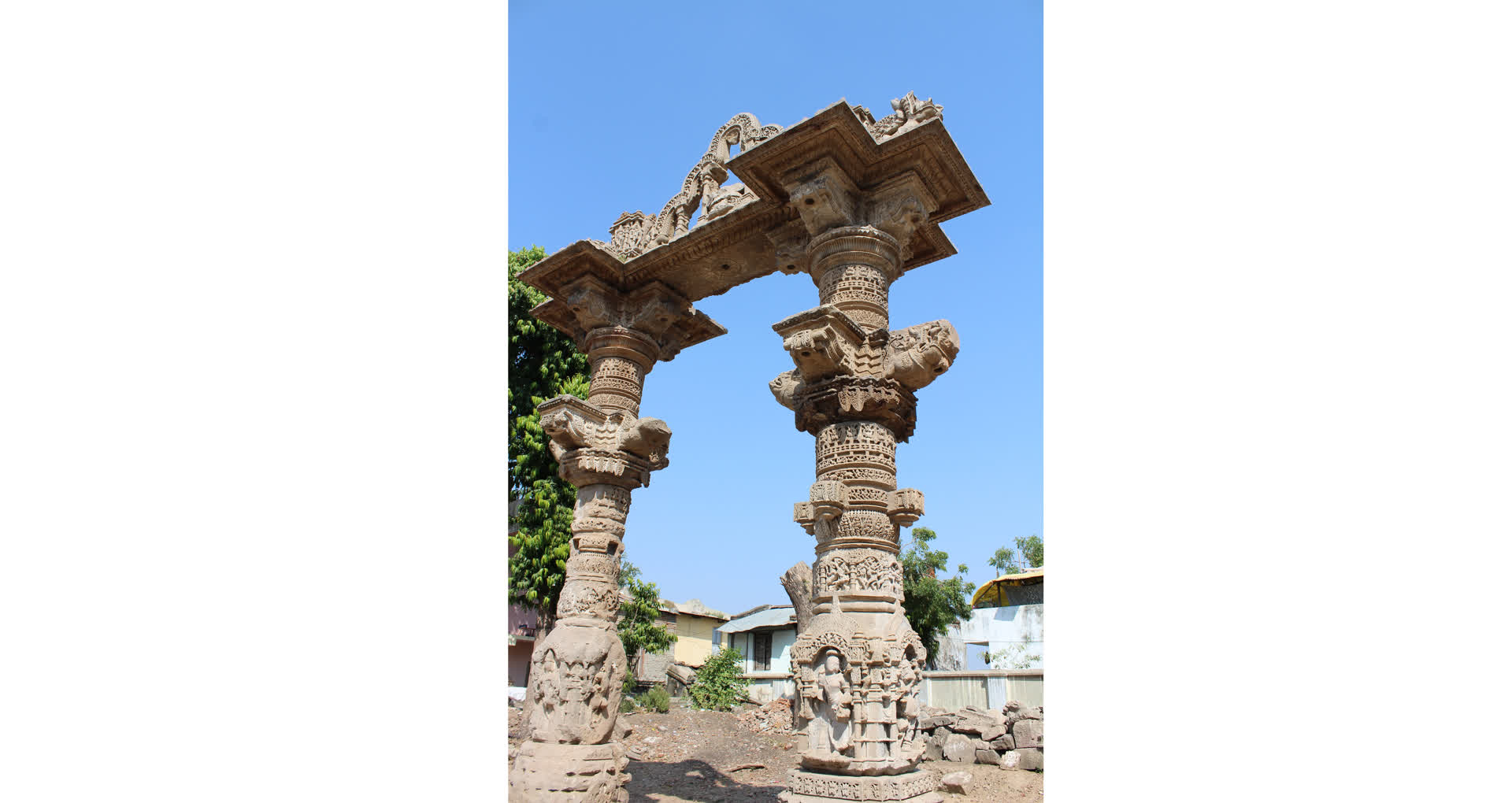 Originally built without any mortar or cementing material, the base of each torana covers 2.5 sq mt for stability. The design and ornamentation of the toranas are fascinating, and one can see similarities between them and the sculptures at the Sun Temple of Modhera and the Rudra Mahalaya of Siddhpur.

Each torana has two circular columns, which are covered in delicate carvings of hunting and battle scenes, animal figures, floral motifs and human figures in niches. The pillars support a lintel and a pediment. At the top of the torana is the sculpture of a deity, which is believed to be Shiva with Ganesha on one side and Kartikeya on the other. Below the lintel of the second torana is a semi-circular arch emerging from the mouth of a makara, a mythical creature, with carved figures embellishing the arch. 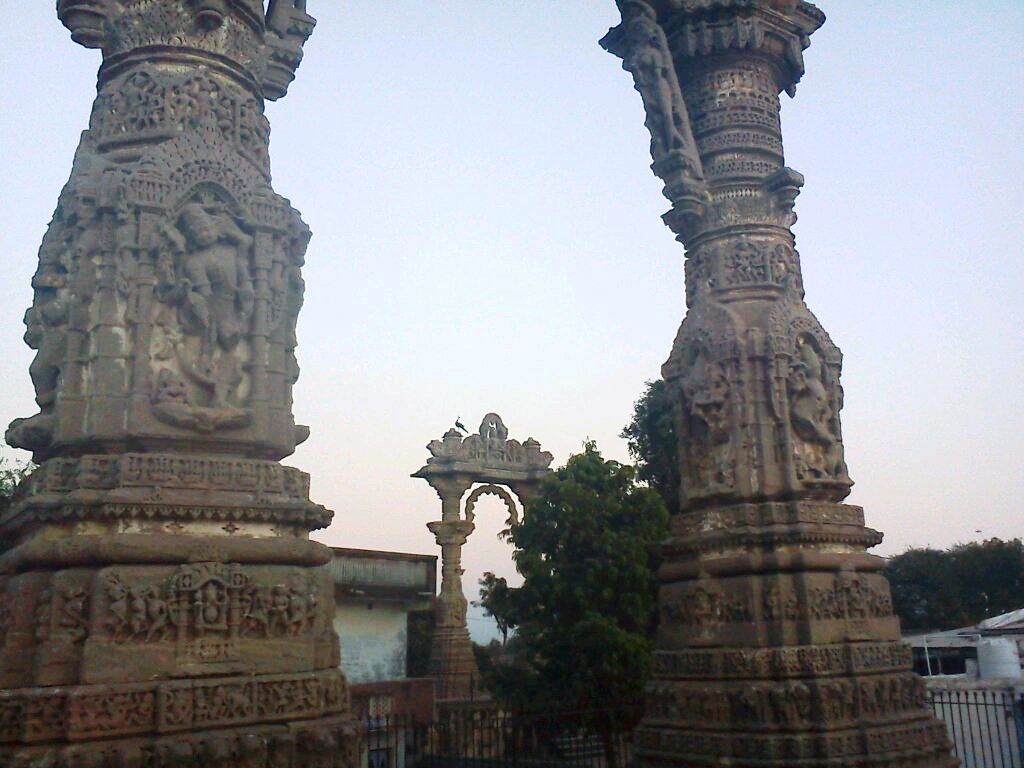 Both the Toranas today | Wikimedia Commons

Some experts believe the Vadnagar toranas may have been triumphal arches built by the Solankis to commemorate their victory over Malwa. Others suspect that these massive arched gateways were entrances to a long-vanished temple complex.

The Vadnagar toranas have been documented by British travelers, writers and photographers like Henry Cousens, who was also an archaeologist with the Archaeological Survey of India (ASI). A K Forbes a colonial administrator and scholar of the Gujarati language, mentions them in Ras Mala: Or, Hindoo Annals of the Province of Goozerat, in Western India published in 1856.

Interestingly, if you had visited Vadnagar in the 20th century, you would have seen only one one torana as the other one had been dismantled and lying in pieces near the erect torana for decades. According to a local legend, the dismantled torana had been taken apart on the orders of Maharaja Sayajirao of Baroda, who wanted to transport it to Baroda. It is said that the locals protested and thwarted the Maharaja’s plans.

Both the Vadnagar toranas were included in the ASI’s protected list in 1960. Over the years, when the second torana was dismantled, some of the sculptures were lost, and this is evident when you look at both toranas together.

In the early 2000s, the ASI was given funds to assemble the dismantled torana and it was put together in 2007. Visitors to the town can now see both toranas in all their majestic glory. 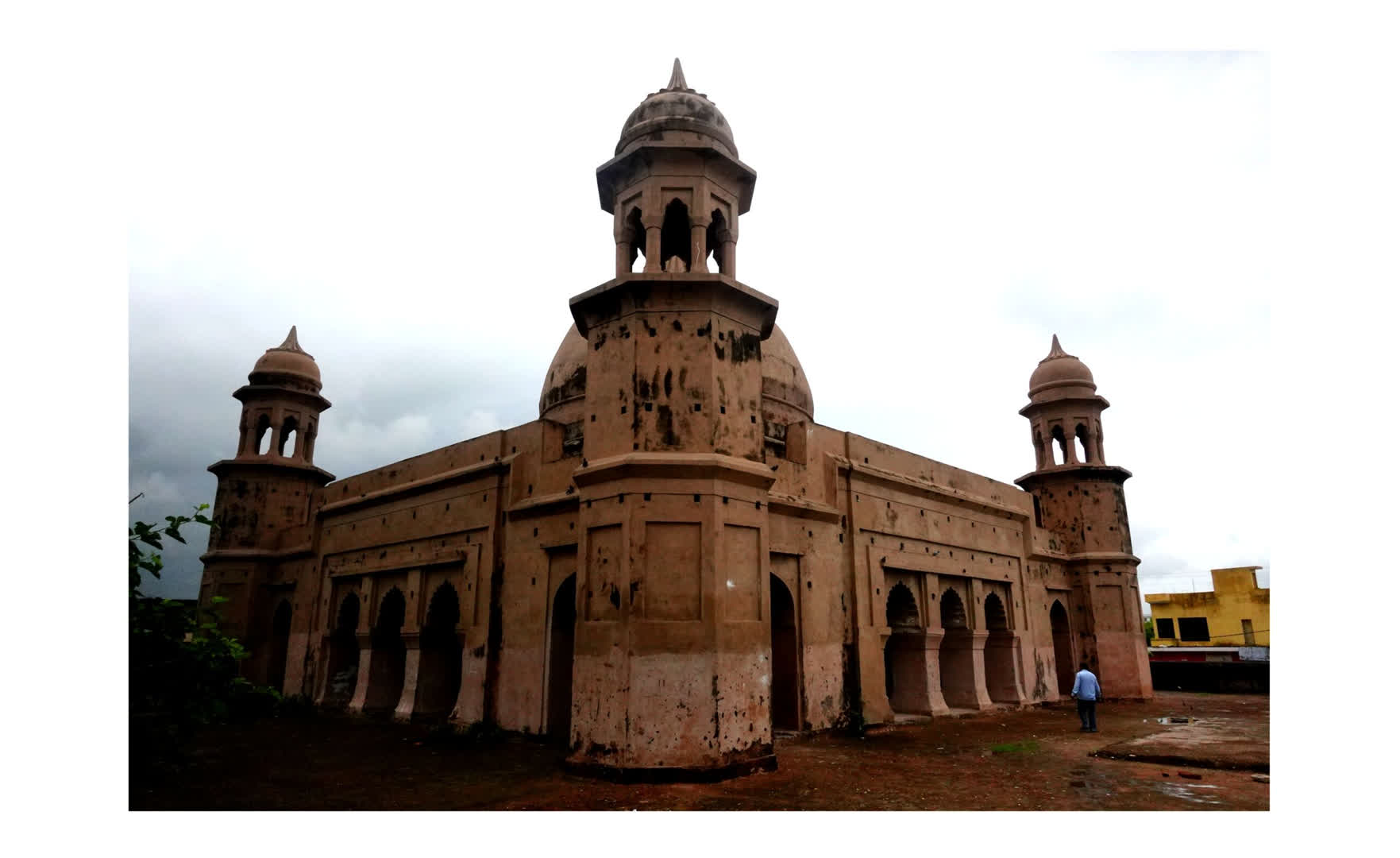 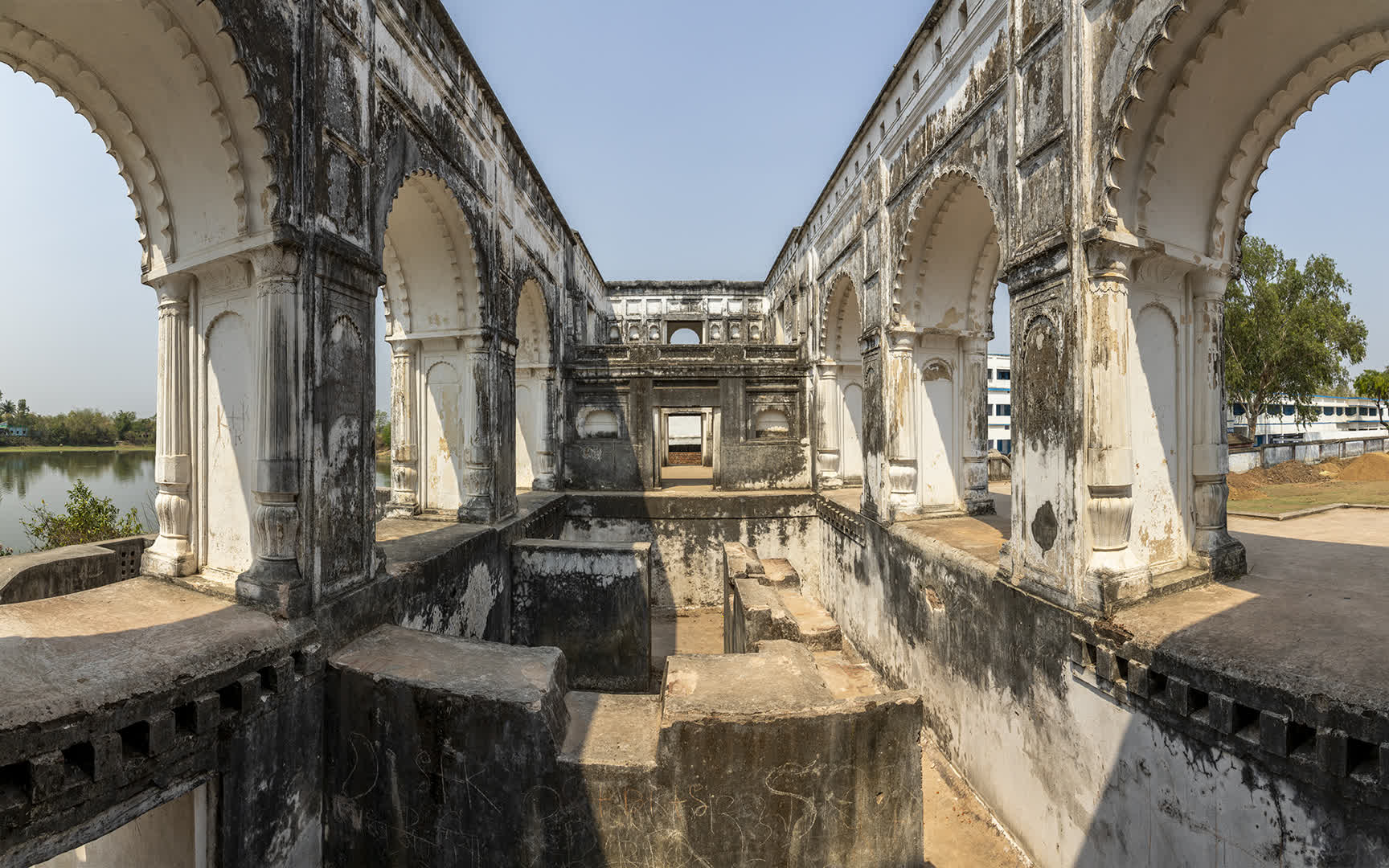 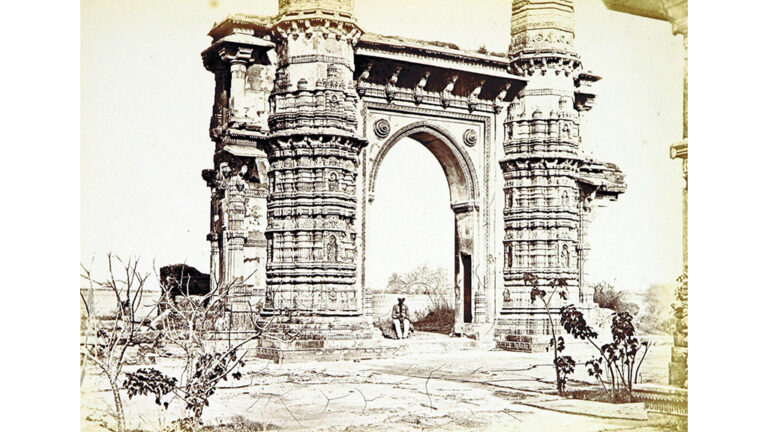 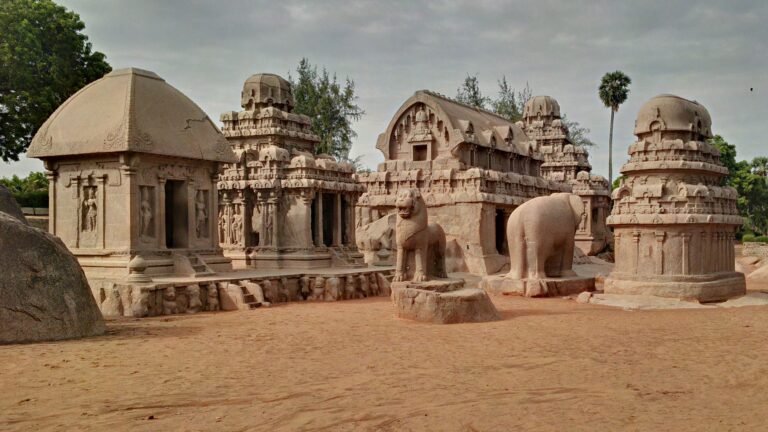