Narajole: Seat of the Hindu ‘Khans’

The West Bengal countryside is dotted with numerous nondescript hamlets, which hide the most amazing stories. The village of Narajole, 115 km west of Kolkata in Paschim Medinipur district, is one of these.

At first glance, there is nothing to suggest that this little village once held the vast estate of a local zamindari family. If you look really carefully, though, you can pick out the remnants of the erstwhile Narajole royals, who earned the titles ‘Khan’ and ‘Rajah’ for their support to their overlords and their philanthropic work. Read on to discover the secret of the Narajole palace, whose Raja was jailed for his revolutionary activities.

The founder of the Narajole royal family, Udaynarayan Ghosh, is believed is to have moved from Burdwan to Narajole in the 15th century CE. Legend says that Udaynarayan Ghosh received a divine message from Goddess Durga in a dream, which led to the recovery of an idol of Durga made of gold in the jungle at Narajole. He also found other treasures, comprising gems and jewellery. Udaynarayan Ghosh took this as a sign, cleared the jungle and settled here. The family continued to rule the region as a zamindari, right down to abolition of the zamindari system post-Independence.

It was in 1596 CE that the eighth-generation descendant of the family, Balwant Ray, received the title ‘Khan’ from the famous Raja Man Singh of Jaipur, who was the Mughal Subedar (Governor) of Bengal, on behalf of Emperor Akbar.

This was a reward for the support the family had given to the Mughal army.  Subsequent rulers of this zamindari family of Narajole continued to use the title ‘Khan’.

Narajole Raj Palace exterior | Narajole Rajbari
Support Live History India
If you like Live History India`s work, do consider extending support to us. No contribution is too small and it will only take a minute. We thank you for pitching in.
Donate
*Terms and Conditions

After the collapse of the Mughal Empire in the 18th century, the region came under the rule of the Nawabs of Bengal and then under the British East India Company. However, this did not alter the fortunes of the Ghosh family, which continued to lord over the region.

Perhaps the most illustrious ruler of Narajole was Mahendra Lal Khan (1843-1892). He was very talented and was fluent in Farsi and Sanskrit even at the tender age of 15. Apart from being associated with various philanthropic activities, Mahendra Lal was a talented writer and a musician. It was he who wrote the book The History of Midnapore Raj, a valuable resource relating to the Narajole Zamindar family. In 1887, the Lieutenant-Governor of Bengal awarded him the title ‘Rajah’ for his philanthropy.

Raja Narendra Lal Khan. Despite being awarded “Raja” title by British, he was arrested for revolutionary activities | Narajole Rajbari

Involvement in the Freedom Struggle

Raja Mahendra Lal’s son, Raja Narendralal Khan, too was a philanthropist and among the many social causes he promoted was public education and women’s rights. In recognition, he too was awarded the title of ‘Rajah’ by the Governor-General of Bengal. But what the British didn’t realize was that he was secretly helping the Indian revolutionaries fight the colonial British.

In the early 1900s, Bengal was in a state of revolutionary ferment. By 1902, revolutionaries across Bengal had established a series of youth clubs, including the famous revolutionary body, the Anushilan Samiti of Calcutta. Fuel was added to the revolutionary fire by Lord Curzon’s Partition of Bengal in 1905, which inflamed Indian nationalist sentiment.

A protest day was observed on 16th October 1905, in various areas of Medinipur district including Medinipur town and Narajole, in which Raja Narendralal Khan took part.

Trailokyanath Bose, the father of famous Indian revolutionary, Khudiram Bose, was the tehsildar (administrative officer) of the Narajole Rajbari. This was when the Swadeshi movement, calling for boycott of British goods and the promotion of Indian goods, was raging across India. Khudiram Bose approached Raja Narendralal for financial help, to sell Swadeshi items from a shop at Burrabazar in Calcutta, which he generously gave.

Lieutenant-Governor of Bengal, Andrew Fraser, earned notoriety for his role in the partition of Bengal in 1905 and the revolutionaries made two attempts on his life. In November 1907, they tied to derail a train in which Fraser was travelling and a month later, they tossed a bomb at another train in which Fraser was travelling, not far from Narajole. Fraser escaped both attacks but police arrested Barindra Kumar Ghosh and two other revolutionaries.

Several houses were raided in Medinipur district in the next few months and the police began to suspect the involvement of Narendralal Khan. On 28th August 1908, the British police arrived at the Narajole Palace with a search warrant. They searched the palace and the Hawa Mahal, and recovered some firearms and bullets. This resulted in the arrest of Narendralal Khan.

He was kept in a condemned cell, in isolation, in Medinipur Central Jail.  When his bail application was rejected, 7,000 people assembled at the court, on 7th September, demanding the release of Narendralal Khan. On 23rd September, Narendralal was granted bail, after two guarantors paid Rs 50,000 each as surety.

The British stripped Narendralal Khan of his title of ‘Raja’ and he was kept under virtual house arrest, with armed police posted outside his residence. But he continued to fund revolutionary organizations until his death in 1920.

After the death of Narendralal Khan, his son Debendralal Khan, brocontinued his legacy. He supported Purna Swaraj (complete self-rule) and on 26th January 1930, he hoisted the national flag at Narajole Palace.

After India’s independence, the family’s Zamindari was abolished in the 1950s, although Debendralal’s descendants continue to live in Narajole, including Sandip Khan, who lives in the Narajole Palace. A school teacher by profession, he belongs to the 21st generation of the family.

As you approach Narajole village, remnants from its royal past begin to reveal themselves to you, one by one. The first is a single-storey mansion built on a small island in the middle of a pond. A flight of stairs from the road takes you to the bank of the pond.

Mahendra Lal Khan was fluent in Farsi and Sanskrit at the age of 15. Apart from being associated with various philanthropic activities he was a talented writer and musician. Most of major built heritage of Narajole was constructed by him | Wikimedia Commons

According to The History of Midnapore Raj by Mahendra Lal Khan, this was the family’s ‘miniature’ summer palace. Called ‘Jalahari’, it was built in 1818 by Raja Mohanlal Khan, grandfather of Mahendralal Khan . The flat-roofed structure is supported by pillars with a portico in front. It was renovated in 1988 by a local heritage committee but since it was not conserved after that, it is in ruins. Mohanlal Khan was responsible for building most of the exquisite build heritage of Narajole.

The water palace Jalahari . The cost of building the palace and building the water tank with a garden on its bank was Rs 80,000 in 1818 | Narajole Rajbari

Jalahari is located in an area called ‘Lankagarh’. Although it is in no way connected to Lanka or Ravana, as described in the Hindu epic, the Ramayana, locals celebrate the festival of Ram Navami. On this auspicious day, a chariot carrying idols of Ram is drawn by devotees to this ‘Lankagarh’ as a symbol of Ram’s victory over Ravana.

There are two samadhi-temples at Lankagarh built in memory of Raja Mohanlal Khan and his wife Mrinalini Devi. The temples are built in flower-chalice dome-style architecture, a definite European architectural influence.

Further down the road is a 25-pinnacled Rasmancha, a decorated platform where idols of Radha and Krishna are temporarily kept during the Ras Festival, which is a Vaishnavite tradition. The Rasmancha is a two-storied structure with a circumambulatory corridor on the ground floor and has many entrances. It was recently renovated by the local Narajole Archaeological Committee. Adjacent to the temple stands a chariot used during Ram Navami.  Opposite to Rasmancha stands a row of six Shiva temples. As per foundation stone of one of the temples were constructed by Mohanlal Khan’s fifth son Brajakishore Khan in 1843.

Proceed further and you will arrive at the inner area of the royal enclosure i.e. the Antargarh. The final architectural marvel of the outer area or Bahirgarh is a two-storied summer palace named Hawa Mahal, also built by Mohanlal Khan. This is opposite the entrance of the main palace and faces a pond. The mansion has a statue of Subhas Chandra Bose in its premises, a reminder of the great revolutionary leader’s visit in 1938.

There is a lone gate to the premises of the Narajole Royal Palace, the main building of “Antargarh”. Once there was a moat around the Antargarh built during the reign of Sitaram Khan (1752 -1784)  of which some part still remains. Except for the main façade, there is nothing else that hints at the structures past grandeur. It is heavily influenced by European architecture. Once the palace building served as Narajole Raj College.

The ruined Joy Durga Temple where once the family deity – The Golden Durga obtained by divine intervention was worshipped. The deity was established in 1303 and the temple was built at a much later period. | Narajole Rajbari

In the interior of the mansion, there is a dilapidated temple of Joy Durga where once the family deity – the Golden Durga obtained by divine intervention was worshipped.  Some terracotta motifs on the walls of the palace are worth mentioning.

Near the palace inside an enclosure named “Thakur Bari Complex” is the Sitaram Jiu Temple built in 1819. The temple is said to have been built with stones brought from Ayodhya.

Sitaram Jiu temple which was built in 1819 at a cost of Rs 1 lakh. The temple is said to have been built with stones brought from Ayodhya, the place described as birth place of Rama in the Hindu epic Ramayana. | Narajole Rajbari

The idols inside this temple are of Ram, his wife Sita, and his brothers Lakshman, Bharat and Shatrughan. Every year, the Ram Navami procession starts from this temple with the idol mounted on the chariot parked near the 25-pinnacled Rasmancha. The procession ends at Lankagarh.

The door of this temple has exquisite woodwork on it. It is believed that Sitaram Khan built this temple around 1860 AD. The wrought iron built Natmandir has a considerable number of coloured glasses on it till today, having survived the vagaries of time.

Woodwork on door of Govinda Jiu temple. Medinipur district showcases exquisite woodwork in many of their temples | Narajole Rajbari

There are some other structures neat the royal residence of the zamindars, like the Mritunjoy Shiva Temple, which has several terracotta plaques on its wall; a small cutchery house (a public office for administrative or judicial business), a ruined Nahabat Khana and dilapidated Dalan temple dedicated to Saraswati.

Narajole does not receive many visitors, just the occasional tourist or history buff in search of its past glory. 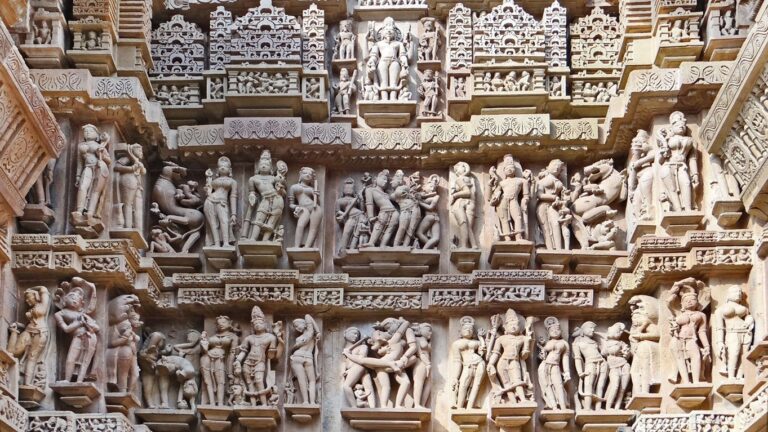