Seventy-two years after Cyril Radcliffe, a British barrister, cleaved two nations with the stroke of his pen, the Sikh community in India will finally gain access to one of their holiest shrines, which Radcliffe left on the other side of the border.

This is the Gurdwara Darbar Sahib and it commemorates the place where Guru Nanak, the first Sikh Guru and founder of the Sikh faith, is said to have died in 1539. Located in Kartarpur town in Narowal district, in Pakistan’s Punjab province, the gurdwara is just 3 km from the Indo-Pakistan border, or the Radcliffe Line. Thanks to a cruel twist of history, the gurdwara has thus been just beyond the reach of the Sikh community in India.

In clear weather, the shrine is visible in the distance from the Indian side, and devotees armed with binoculars have been climbing a small hill to get a glimpse of the Guru’s final resting place. However, from 9th November 2019, they will be able to travel to Kartarpur and actually visit the gurdwara, when the Kartarpur Corridor is opened by India and Pakistan on that day. This historic event has been timed to coincide with the 550th birth anniversary of Guru Nanak.

The Gurdwara Darbar Sahib we see today is a much later version of the original shrine built on the right bank of the Ravi river. The current gurdwara was constructed by a Hindu devotee, Lala Shyam Das in 1911, and underwent major renovations in 1929, thanks to the Maharaja of Patiala, Bhupinder Singh. It has been repaired, restored and expanded a few times since then and has now been readied for the historic moment.

Kartarpur was founded by Guru Nanak in the 16th century, when he was given land to settle there after his many spiritual tours or Udasis. For around 18 years, he lived the life of a farmer along with his family, and went on to nurture a growing community of devotees who were drawn to Kartarpur to listen to his teachings.

As the faithful came in increasingly large numbers, quarters for pilgrims were built, a communal kitchen (langar) was set up and a congregation hall was constructed. The settlement became a place of pilgrimage, and Sikhs from all over came here to seek the Guru’s blessings. Kartarpur is important to Sikhs for another reason, for it was here that Guru Nanak groomed and anointed his devotee, Bhai Lehna, as his spiritual successor.

Guru Nanak breathed his last at Kartarpur on 22 September 1539, at the age of 70 years. Over the years, the Ravi river altered its course and many of the structures from the Guru’s original settlement in Kartarpur, including the platform that marked his final resting place, were inundated. According to the legend, the Guru’s son, Sri Chand, salvaged the urn that contained the Guru’s ashes and had it moved and buried on the left bank of the river. It is buried where the Dera Baba Nanak Sahib stands today, in Gurdaspur district, in the Indian state of Punjab, just 1 km from the border.

Five hundred years before Radcliffe’s ad hoc line separated the region, Kartarpur and Dera Baba Nanak were just simple villages, separated by a distance of just 4 km. Dera Baba Nanak, on the Indian side, was the site where Guru Nanak rested after one of his tours and it soon became a pilgrimage site. When the village headman suggested that the Guru settle here, he did – a stone’s throw away, in Kartarpur.

Interestingly, when the international border was being discussed at the time of Independence in 1947 and the province of Punjab was divided, Gurdaspur district was assigned to Pakistan but the Partition plan was reworked at the behest of then Indian Prime Minister Jawaharlal Nehru and the Sikh leadership. As a result, the district was divided into two parts – the half with Kartarpur went to Pakistan and the half with Dera Baba Nanak stayed with India.

Since 1947, the Sikh community has been repeatedly seeking permission to visit their shrines in Pakistan, among them the Gurdwara Darbar Sahib and the Gurdwara Janam Asthan, the birthplace of Guru Nanak, also in Pakistan. They pointed out that if the two countries agreed, the plan could be greatly facilitated by building a corridor connecting Dera Baba Nanak Sahib and Gurdwara Darbar Sahib – the Kartarpur Corridor.

The issue of the corridor was first raised at the international level in 1999, when the Indo-Pak bus was introduced. The then Indian Prime Minister Atal Behari Vajpayee, who visited Pakistan on a special invitation, had discussed the Kartarpur Corridor with the Pakistan government.

The Kartarpur Corridor may be a small step ahead in diplomatic ties, but the Sikhs believe, it is the answer to their prayers. 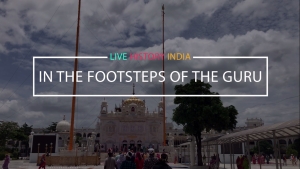 In the Footsteps of the Guru