Dwarfed by the relentless traffic and the crowds that throng the Girgaum Chowpatty seaface is a memorial to the man who lit the fire for a free India. The memorial, marked by a towering statue on a handsome pedestal, is a tribute to ‘A Beloved Leader of the People’, or ‘Lokmanya’ Tilak.

Surrounded by a manicured garden on the water’s edge, the statue has been erected at the very spot where Tilak was cremated almost a century ago, on 1st August 1920. But the statue is only part of the memorial to this leading light of India’s freedom movement. Buried 30 feet below the ground is a large iron box that contains Tilak’s pagadi (turban), clothes, shoes, a copy of the Gitarahasya penned by him, and a copy of his biography by N C Kelkar.

Tilak was so loved and respected by the people that prominent citizens of Bombay lobbied with the municipality to make an exception and allow a memorial to be built at the site of his cremation. Under the weight of popular demand, the municipality had no choice but to give in.

Lokmanya Tilak, born Bal Gangadhar Tilak (July 23, 1856 – August 1, 1920), was an ardent nationalist, a lawyer, scholar and journalist best remembered for his fight for 'Swaraj' or self-rule and his words ‘Swaraj is my birthright and I shall have it.’ Among his many contributions to the freedom movement, he also popularised the public celebrations of Ganesh Utsav as well as Shivaji Jayanti as a way of mobilising the masses.

Tilak breathed his last in a guest room at Sardar Griha near Crawford Market on 1st August 1920, the very day that Mahatma Gandhi launched his Non-Cooperation Movement against British rule. The outpouring of grief was tremendous and the crowds that gathered for his final journey were unprecedented.

According to official estimates, 2 lakh people poured onto the streets to pay their last respects as the funeral procession made its way to the cremation site.

Due to the massive numbers of people – it was the biggest funeral Bombay had ever seen – the Bombay Police granted special permission to cremate Tilak at Chowpatty instead of a crematorium. But there was a caveat – no memorial would be built at the site.

Still, the calls for a memorial to the great leader refused to die down. Moreover, there was a precedent for memorials of nationalist leaders in the city. For instance, memorial statues had been erected for social reformers and nationalists Mahadev Govind Ranade (1842-1901) and Gopal Krishna Gokhale (1866-1915), in the years 1913 and 1922 respectively, near the Oval Maidan.

Due to relentless lobbying by prominent Indian members of the Bombay Municipal Corporation (BMC), such as Vithalbhai Patel (brother of Sardar Vallabhbhai Patel) and Barrister K F Nariman (after whom Nariman Point is named), the proposal for a Tilak memorial was finally accepted by the BMC in 1925.

To raise funds for the memorial, a 'Lokmanya Tilak Memorial Committee' was set up on 1st August 1925, with Sarojini Naidu as its president. On receiving permission from the Governor of Bombay in 1926, money was raised through public subscription and one of the city’s most eminent sculptors, Raghunath Krishna Phadke, was tasked with creating the statue.

Apart from his stellar reputation as a sculptor, there was another reason Phadke was selected – he had previously had a ‘sitting’ with Tilak for a bust, and this had enabled him to take measurements of his subject. This happy coincidence had taken place in October 1917, three years before Tilak’s death, when Phadke had organized an exhibition of ‘moving wax figures’ at Rambaug, near CP Tank in Bombay.

It was here that Phadke first met Tilak, who had attended the exhibition, which was also graced by prominent personalities such as Dr Annie Beasant and journalist BG Horniman. Tilak had even commissioned Phadke to create a marble bust of Chhatrapati Shivaji for Pune's Shivaji Mandir memorial.

In 1918, Phadke expressed his desire to fashion a marble bust of Tilak himself and the leader was more than obliging. Phadke thus photographed him twice from all sides, with and without his iconic pagadi. In fact, Tilak gave Phadke an hour-long sitting to complete his work of art. The bust of Tilak – with his iconic pagadi – was installed at the Lokmanya Tilak Smarak Mandir in Sangli, Maharashtra, to commemorate the nationalist leader’s visit to the city for the Jyotisha Sammelan in February 1919. Long forgotten, I managed to identify this bust during a visit to Sangli in February 2019, for my research on Phadke, almost a century later.

Phadke had sculpted another bust of Tilak – without a pagadi – which is at the R K Phadke Museum in Dhar, Madhya Pradesh, and a copy of it can be seen at the Kesari Museum in Pune. Since Phadke was now considered an ‘expert’ on Tilak, it greatly helped him get the commission for Tilak’s statue at Chowpatty.

An inscription at the base of the statue, on the left, next to the signature of Phadke, tells us that the actual casting was done in the studio of noted sculptor M. K. Kolhatkar of Baroda.

The labour of love for the memorial finally bore fruit on 1st August 1933, 13 years after Tilak’s death, when the statue Phadke had fashioned was unveiled at Chowpatty. Burying the iron box containing Tilak’s earthy possessions and a copy of his biography turned the memorial into a samadhi or a cenotaph, of sorts, for the cherished leader.

Tilak’s was the only statue that Phadke executed in Bombay. Due to competition from other sculptors, both European and Indian, Phadke soon moved to the then princely state of Dhar, where he set up a studio and settled permanently. Today, his studio is a museum, and in 1961, the Indian government acknowledged the contribution of this great artist by conferring the Padma Shri on him. 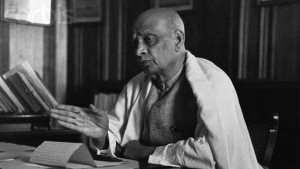 For almost a century, from his perch at Chowpatty, Tilak has been watching over the surging crowds that converge on this narrow strip of sand to take in the sea breeze and steal a few moments of respite from this teeming city. Most of them are unmindful of his presence but their nonchalance will not diminish Tilak’s contribution to a free India.

Sandeep Dahisarkar is a Mumbai based Indologist and art historian, who has published several research papers on the pre-British history on Mumbai.