It is one of the two best-loved epics of India and, like the Mahabharata, the story of the Ramayana too has been told and retold. It has over 300 versions, and has been debated and discussed for hundreds of years. Painted on our temple walls and etched in our minds, each corner of India has its own version of this tale.

But did you know that one of the earliest retellings of this epic was done by a Jain scholar, who had a very different take on the epic?

In his version, Ravana is not the villain and it is not Ram who finally kills him.

This Jain Ramayana – the Paumacariya – written in Prakrit by Jain monk Vimalasuri, is the most popular of the 17 versions of the Ramayana in Jain literature.

Historians are not sure when this work was penned. Many believe its author, the Jain monk Vimalasuri, lived some time between the 3rd century BCE and 4th century CE. But what we do know is that his version of the Ramayana marked a significant counterpoint to the more famous, original version by Valmiki.

Hanuman on his chariot, a scene from the Ramakien, Thailand’s version of the Ramayana

Vimalasuri claims that he wrote Paumacariya 530 years after the emancipation of Lord Mahavir (the 24th Tirthankara of Jainism), which would date the work to the 1st century CE. However, German Indologist H Jacobi and Jain scholar K R Chandra date it to the 3rd-4th century CE, based on its linguistic style and historical references.

Regardless of when it was penned, what makes this work interesting is the sense of geography it portrays. According to independent researcher, Savita Chaudhary:

The story opens with the description of the land of the Vidyadharas, of which the Rakshasas and Vanaras are a part. In a sharp departure from common perception, Vimalasuri says the Rakshasas are not demons, but civilized, devout Jains of whom Ravana was king. Ravana is said to belong to the Meghavahana lineage. Interestingly, the 2nd century CE Hathigumpha inscription of Kharavela, the then king of Kalinga, at Udaygiri in Odisha, also mentions a dynasty of Megha kings ruling in the Vindhyan region.

Paumacariya says that Ravana was a handsome, just ruler and protector of Jain shrines, with only one weakness – Sita.

Vimalasuri tried hard to make his characters identifiable with the common man by taking away their fantastical nature.

For example, he offers the following explanation for Ravana being called ‘Dasamukha’ or ‘ten-headed’. When Ravana was young, his mother gave him a necklace made of nine gems, which when worn by his son, reflected his face nine-fold. Hence, the name. His brother Kumbhkaran is cast as a religious person who spends a lot of time in prayer. There is no claim to him sleeping for years and waking up only to eat.

Vimalasuri also explains how the Vanaras acquired their name. He claims they were a tribe or clan who used the insignia of monkeys on their banners. They were a human warrior class and not actual monkeys, as portrayed by Valmiki.

As for the female protagonist of the epic, the Jain Ramayana says that Sita is born naturally to Janaka and Videha (Sita’s mother who is not named in Valmiki’s Ramayana), and even had a twin brother named Bhamandala. There is no mention of her being the daughter of the Earth or found in a farm.

Once the origin of the various dynasties has been established, only then, in chapter 22, does the author delve into the actual story. Here, too, he offers a counter-narrative. For instance, he sympathises with Kaikeyi (Dashratha's third wife and Ram's stepmother), calling her actions that of a concerned mother.

The story goes that when she heard that her son Bharata wanted to renounce the worldly life and become a Jain monk, she pleaded with her husband to step in and make him king. Rama, on hearing this, voluntarily goes into exile as he knows that Bharata wouldn’t accept the throne in his presence. In Valmiki's Ramayana, she is portrayed as an evil queen wanting to eliminate Ram in favour of her son.

Miniature from the Mughal version of the Ramayana

In the Jain Ramayana, there is no mention of Ram killing a golden deer. Instead, Ravana entraps Sita by using Lakshman’s voice and kidnaps her.

However, the most important alteration in this version is that it is Lakshman who kills Ravana and not Ram.

These acts demonstrate Ram’s adherence to the Jain values of non-violence. Also, the episode pertaining to Sita’s fire ordeal at the end of Valmiki’s Ramayana is omitted. In the Jain version, Sita renounces the world to become a Jain ascetic.

The Paumacariya marks a break from the Brahmanical account of Valmiki’s Ramayana. And the reason is clear. In the first scene of this version, set in the prosperous kingdom of Magadha with its capital at Rajgriha, the author explains his motivation to pen a new version of the Ramayana.

Vimalasuri says that, at that time, the kingdom was ruled by King Shrenik (Bimbisara), who doubted the authenticity of the existing version of the Ramayana and asked for the ‘correct’ version. It was then that Lord Mahavira appeared, to help retell the story of the ‘real’ Ramayana, which eventually became the Paumacariya.

Rooted in Jain values and its ethos of non-violence, this version of the Ramayana, the Paumacariya, has a different perspective or take on the great epic. It also underscores the draw of this great epic across faiths and across time! 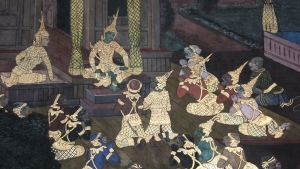 Today, English translations of the Jain Ramayana are available online for those keen to read and understand this 'alternative' version of one of India’s greatest epics.