The long-cherished desire of man to fly came true on 17th December 1903, when two brothers, Wilbur and Orville Wright, made four brief flights in their ‘flying machine’ at Kitty Hawk in the USA. India, then under the British Raj, entered the world of aviation on 18th February 1911, when a 23-year-old French pilot named Henri Pequet flew a Humber biplane carrying 6,500 cards and letters from a polo ground in Allahabad to Naini Junction, around 10 km away.

The plane – with 50 horsepower engines and made of a wooden structure, canvas coverings and steel wires for controls – covered the distance in 13 minutes. Yet, there were no crowds to cheer for this event, except a lone postman to whom Pequet handed over a bag of mail! Despite the complete lack of fanfare, the event marked the beginning of commercial aviation as well as the Airmail service in India.

For the next two decades, the country witnessed many such airmail flights, taking off without any timetable, within India and also internationally. During this time, there were a series of events that set the stage for civil aviation in India. For instance, airports were constructed in 1924, in Calcutta, Allahabad and Bombay. In 1927, the Government in India, then under the British, opened a Department of Civil Aviation.

In 1929, the Imperial Airways (forerunner of British Airways) introduced international air travel in India. The first London to Karachi flight involved four different aircraft and 20 stops over a period of 6-7 days, costing GBP 130 (about 7 lakh today)! Mind you, this was much more efficient than the over three weeks it took to make the trip by ocean liner.

Advertisement for the London to Karachi flight

In the same year, with aviation the new ‘in-thing’, Prince Aga Khan, the religious head of the Ismaili Muslims, announced a solo air race between London and Karachi, with a prize of GBP 500. The participants were JRD Tata, Aspy Merwan Engineer (an Indian Air Force officer who rose to become India’s chief of Air Staff) and a pilot named Man Mohan Singh.

It was Man Mohan Singh who won the prize, completing the journey a day before JRD Tata, on an aircraft named ‘Miss India’. This year also saw the launch of India’s first flying club – the Aero Club of India & Burma – and it handed out its first licence on 10th February 1929, to JRD Tata.

JRD Tata convinced his uncle, Sir Dorabji Tata, who then headed the Tata Group, to invest in the upcoming field of aviation, and Tata Airlines was born in 1932. The company was based in a small hut with a palm-thatched roof at Bombay’s Juhu airstrip. Its first flight took off on 15th October 1932, piloted by JRD Tata himself, carrying 25 kg of 4-anna mail for the Indian Postal Service from Karachi to Bombay via Ahmedabad, in a single-engine de Havilland Puss Moth. The same year, the airline also launched its first domestic flight between Bombay and Trivandrum, a six-seater flight.

In its first year itself, Tata Airlines flew 2,57,495 km, carrying 155 passengers and more than 10 tonnes of mail. It is believed that since these planes were tiny, there were times when passengers had to sometimes even sit on mail bags!

At this point, a Bombay-Madras return ticket cost about Rs 256.

Even then, the industry was slow to catch on as people were afraid to step onto the new flying machines.

In 1946, Tata Airlines was renamed ‘Air India’, and two years later, it established its international division which began a weekly Bombay-London flight called the ‘Malabar Princess’ (a 40-seater Lockheed L-749 Constellation). For a newly independent India struggling with finances, this was seen as a great feat.

The flight took 24 hours with two refuelling stops, at Cairo and Geneva. Advertisements in the newspapers at that time reveal that the ticket was priced at Rs 1,720. Its passengers included luminaries such as cricketer Duleepsinhji, who was travelling to see the Ashes in London; his cousin Maharaja Digvijaysinhji of Nawanagar; JRD Tata; and Indian cyclists H B Malcolm and R R Noble, who were to represent India at the Olympic Games at Wembley.

In 1953, the Indian government decided to nationalise Air India but, in recognition of JRD Tata's contribution, made him the company’s chairman. Under JRD Tata, Air India was considered one of the world's best airlines. In 1960, with a fleet of six Boeing 707s, it became the world's first airline to fly fully into the 'jet age'. JRD Tata continued to head Air India till 1977, when he was removed by the Janata Party government, due to his support for Indira Gandhi's Emergency.

The saga of the rise, fall and the various attempts to resurrect Air India is well known. Today, hundreds of thousands of Indians board flights to criss-cross India and the world but few remember the passion with which it all began. 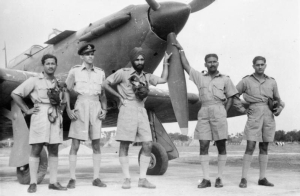 - Maharaja Bhupinder Singh of Patiala was the first man in India to own an aircraft, which he bought from the United Kingdom in 1910.
- In 1990, Air India made it to the Guinness Book of World Records for the largest evacuation effort by a civil airline, when it flew over 1,11,000 people from Amman to Mumbai in 59 days, operating 488 flights just before the first Gulf War.

You May Also Like
Snapshort Histories
Jahangir’s Tomb: A Modern Marvel
By Nehal Rajvanshi
A large square monument in Lahore, now in Pakistan, pays tribute to a great Mughal Emperor, and a great love.
Snapshort Histories
Heera Mandi: Red-Light Area with a Royal Past
By Aashish Kochhar
Lahore’s oldest red-light district, Heera Mandi, was a centre of culture and sophistication with royal roots.
Snapshort Histories
Influenza 1918: The Disappearance of Memory
By Chinmay Tumbe
Over 20 million died in a matter of few months on the subcontinent during the influenza pandemic
Snapshort Histories
Feb 1948: The British March Out of India
By Aditi Shah
We take you the farewell ceremony held for the last British troops to leave India
Support
Support
Each day, Live History India brings you stories and films that not only chronicle India’s history and heritage for you, but also help create a digital archive of the 'Stories that make India' for future generations.