Mention the Battle of Plassey and the first name that comes to mind is that of Robert Clive and how this ambitious officer of the East India Company turned the tables, to herald the beginning of British rule in India. But there is a lot we don’t know about the battle – where it was actually fought, how things got out of hand, and who the real heroes were. While we know of the great betrayers in this saga – Mir Jafar and the Jagat Seths – here is the story of the real heroes!

The 2nd of July 2019 marks the 262nd death anniversary of Nawab Siraj ud-Daulah, who was famously defeated in the Battle of Plassey (Palashi) in Bengal. Fought on an open stretch of green between Murshidabad and Kolkata, in an area called Palashi (Anglicised by the British as ‘Plassey’), this theatre of war is a small industrial town today.

The battle left a strong imprint on modern Indian history as it marked the beginning of Britain’s ambitions in India. While the story of Plassey is one of betrayal and treachery, it is also the story of two brave men – Mir Mardan and Diwan Mohanlal – who stayed loyal to the Nawab of Bengal till their last breath. They are the true ‘heroes’ of the Plassey saga and the events that followed.

Following the decline of the Mughal empire in the 18th century, the Mughal governors of Bengal became semi-independent rulers. In 1752, the then ruling Nawab of Bengal, Alivardi Khan (1671-1756), declared his favourite grandson Mirza Muhammad Siraj ud-Daulah as his heir apparent, leading to a number of intrigues within the Nawab’s family as well as members of his court. Four years later, following  Alivardi Khan’s death, 23-year-old Siraj ud-Daulah became the Nawab of Bengal, at Murshidabad, capital of the Nawabs and now a hotbed of intrigue and conspiracies.

Dissent grew as Nawab Siraj ud-Daulah made several changes in his administration, which enraged his uncle and commander-in-chief of his army, Mir Jafar. Mir Mardan, a loyal and an efficient army officer, was promoted to the post of Bakshi or Paymaster of the Nawab’s army, effectively taking financial control away from Mir Jafar. Another loyal officer, a Kayasth officer from Purnea named Mohanlal, was appointed as the Diwan or Prime Minister. Siraj ud-Daulah also tried to break the power of the old mercantile elite and bankers like the Jagat Seths, whom he accused of embezzling money from the state.

Conflict With The British

On a clean-up spree, soon after his accession in 1756, Nawab Siraj ud-Daulah also conflicted with the British over dastaks or trade permits that had been granted to them by the Mughal emperors. These exempted the East India Company from Customs Duty. While this exemption was for Company trade alone, corrupt officials were by indulging in illegal private trade and making huge fortunes by misusing these dastaks. In addition, the British were also fortifying Fort William and giving shelter to political opponents of the Murshidabad Court.

Mir Jafar and his son|Wikimedia Commons

In June 1756,  Nawab Siraj ud-Daulah marched towards Calcutta and destroyed the British fort. After this huge victory, he renamed the city ‘Alinagar’ in honour of his grandfather, Alivardi Khan, and returned to Murshidabad. But the British sent reinforcements from Madras, headed by Colonel Robert Clive and Admiral Charles Watson, and recaptured Calcutta in January, 1757. Soon, a conspiracy began, to dethrone the Nawab.

Historian B K Gupta, in his book Sirajuddaullah and the East India Company, 1756-1757 (1962) writes about the meeting of the Fort George Council in Madras on 13 October 1756, where it was decided “to effect a junction with any powers in the province of Bengal that might be dissatisfied with the violence of the Nawab's government or that might have pretensions to the Nawabship”. The British were soon in touch with Mir Jafar, the Jagat Seths and other important Bengal officials like Rai Durlabh (the Diwan). Pleased with their plans, British official Luke Scrafton would write on 9th April 1757: “How glorious it would be for the Company to have a Nawab devoted to them!” Robert Clive would write to Mir Jafar, assuring him that the British would stand by him like a rock, and place him on Bengal’s throne.

Unaware of the conspiracy, Siraj ud-Daulah dispatched a huge force of 50,000 soldiers, 10 war elephants and 40 cannons, which faced off against the British army of 3,000 soldiers led by Robert Clive on 23rd June 1757. He didn’t know it then but the only men loyal to him were Mir Mardan and Diwan Mohanlal. The fighting began at 8 o’clock in the morning.

While two-thirds of the Nawab’s army remained mute spectators, it was only the few forces under Mir Mardan and Diwan Mohanlal who charged at the British. Robert Clive had not expected such fierce resistance from the Nawab’s army and contemplated a retreat to Calcutta. The balance of power was shifting to the Nawab’s side when tragedy stuck. Around 3 pm, a cannon ball stuck Mir Mardan, killing him instantly.

Mir Jafar advised Siraj ud-Daulah to suspend the fight for the day, and regroup the next day. At the same time, he sent a message to Robert Clive, informing him of the plans, who in turn ordered a fresh British onslaught. The Nawab’s army was completely routed and the British were on their way to Murshidabad.

On July 2, 1757, Siraj ud-Daulah was captured and executed on the orders of Miran (Mir Jafar’s son). Mir Jafar became the Nawab and the British began to wield real power. This was a huge turning point in the history of the subcontinent.

Mir Mardan had died a hero’s death in the Battle of Plassey. His mortal remains were buried at Faridpur (in present-day Murshidabad district of West Bengal) near the Plassey battlefield. The tomb of Bakshi Mir Madan is under the supervision of the Archaeological Survey of India.

Diwan Mohanlal escaped to Juranpur Kali Pith (now in Nadia district of West Bengal) with his younger son, while his elder son was executed by Miran. He died in relative obscurity.

The tomb of Bengal Nawab Siraj ud-Daulah (Left) at Khosbagh (English meaning Garden of happiness) on the western side of Bhagirathi River (presently in Murshidabad district of West Bengal)|Sk. Abdul Amin

While they lost the battle on that fateful day, Siraj ud-Daulah, Mir Mardan and Diwan Mohanlal have become immortalised as heroes in popular culture. In 2007, a statue of Siraj ud-Daulah was installed next to the ‘Plassey Monument’, which commemorates the battle. 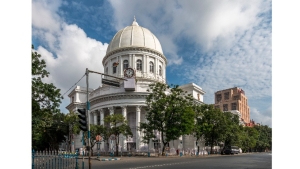 The other heroes too have not been forgotten. Bengali poet Nabinchandra Sen celebrated their bravery in his poem Palashir Juddho (1875). Their loyalty was also eulogised in the Sachindranath Sengupta’s drama Sirajudullah (1938).

While they may have lost the Battle of Plassey, the memory of these brave men still lives on.

Sk. Abdul Amin is a research scholar and visiting faculty at Jadavpur University, Kolkata. He is a heritage enthusiast with an interest in history through the lens of art, culture, and religion.

Kolkata independence freedom fighter
You May Also Like
Snapshort Histories
Ghulam Yazdani: First Indian Chronicler of the Deccan
By Kurush Dalal
What do the historic sites of Bidar, Mandu and Naldurg and the Ajanta and Ellora caves have in common?
Snapshort Histories
Clock Tower of Amritsar: Casting a Long Shadow
By Aashish Kochhar
Once, the Lal Chabutra defined Amritsar’s skyline, casting an imperial shadow over the Golden Temple
Snapshort Histories
In the Footsteps of Ram
By Krutika Haraniya
Ram is said to have passed through, across the Indian Subcontinent. This Dussehra we trace the journey of Ram.
Amazing India
Mahabaleshwar: More Than Strawberries
By Aditi Shah
A historic hill station is Maharashtra today serves as a weekend spot as well as a pilgrimage centre
Support
Support
Each day, Live History India brings you stories and films that not only chronicle India’s history and heritage for you, but also help create a digital archive of the 'Stories that make India' for future generations.