The discovery of oil in India comes with a quirky story but one that is too slick to be true. According to the tale, now a legend in corporate history circles, India’s oldest oil field – Digboi in Assam – got its name from the goading of a British engineer, who exhorted his team to ‘dig boy, dig!’ as they scoured the earth for liquid black gold.

While the oil field, also one of the world’s oldest, owes its name to clever wordplay, the truth is it probably got its name from a corruption of ‘Diboi Nallah’ (note the absence of the ‘g’), the local name for a rivulet that passes through the region.

What we do know for sure is that the discovery of crude in Assam was somewhat of an accident. It goes back to the 1820s, when an invading army from Burma displaced the 800-year-old rule of the Ahoms, leading to the first Anglo-Burmese War of 1824. During the war, a number of British officers went deep into Assam on reconnaissance missions. In 1825, a British officer, Lt R Wilcox of the 46th Regiment Native Infantry, who was at Supkhong (40 km west of Digboi), mentioned in his report that he had observed ‘great bubbles of gas and petroleum’ rising to the surface and that ‘the jungles are full of an odour of petroleum’.

The plaque at the entrance of Digboi refinery|Wikimedia Commons

This is the earliest recorded reference to oil in Assam. Interestingly, the British discovered oil in Assam a decade before they realised how well suited the rolling hills of Assam would be to the planting of tea.

Lt Wilcox submitted his report in 1825, a year before the Treaty of Yandabo (1826), which led to the establishment of British rule in Assam. From 1825 to 1845, as British officials penetrated deep into Assam, a number of British adventurers, botanical surveyors, military personnel and travellers also made note of sightings of oil during the course of their surveys. But they paid little attention to exploring this further as oil was not yet a lucrative commodity, especially since much of the machinery they used ran on coal rather than oil.

It took the British a few decades to realise that petroleum was much more adaptable and flexible than coal was, and it was only in the second half of the 19th century that they asked the Geological Survey of India (set up in 1851 for the exploration of coal), to undertake a systematic survey for other resources too.

Thereafter, things began to move. Barely eight years after Edwin L Drake drilled the world's first oil well at Titusville, Pennsylvania, USA, in 1859, a British businessman named Goodenough of McKillop, Stewart and Company, Calcutta, struck oil in Asia's first mechanically drilled well at Makum, around 25 km from Digboi, on 26 March 1867. Yes, there was oil but it was not a financially viable well and it was soon shut down.

It can be said that the oil industry in India began on 19th October 1889, when the first gush of oil rushed out of the Digboi Oil Well No 1. It was the first commercially viable oil well in India, producing 200 gallons of oil a day.

To expand operations, the Assam Oil Company was formed in London in 1899. Digging started and oil was struck just 54 metres in. Or so they thought – it was only a small pocket. Subsequent drilling found a very large deposit at 202 metres, and soon the company set up the continent’s very first refinery on 11th December, 1901 in Digboi. This was officially the beginning of India’s oil industry, with about 100 employees. The small production gradually increased to about 350 barrels per day. 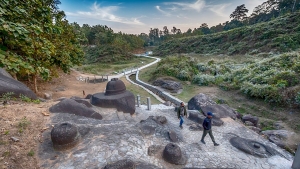 In 1921, the more experienced London-based Burmah Oil Company took over the management of the field and the output rapidly rose to 4,500 barrels per day. The Indian Oil Corporation Ltd (IOC) took over the refinery in 1981.

Today, the Digboi oil refinery is the oldest functioning oil refinery in India and among the oldest in the world. The town also houses the ‘Digboi Centenary Museum’ built around the famous Digboi Well No 1, where the industry had its beginnings.