Did you know that one of Mumbai’s well-known landmarks, Prithvi Theatre, now run by members of the Kapoor family, was once a travelling theatre company that staged over 2,000 plays to foster communal harmony across India? This little theatre, in Mumbai’s suburb of Juhu, sure packs a punch!

In the 1940s, a decade of great nationalistic fervour in India's march to freedom, theatre was seen as a potent way to spread a message. A number of travelling theatre companies toured the length and breadth of India, performing plays with a social message. These groups comprised artistes and support staff who travelled to the remotest corners with their props, to reach out to newer audiences.

In 1942, the Indian People’s Theatre Association was established by a group of progressive writers and actors such as Balraj Sahni, Ritwik Ghatak, Utpal Dutt and many others, to use theatre as a medium of social and national awakening. As a result, a number of plays on social and national issues were composed and performed across India by theatre companies.

One such travelling theatre company was Prithvi Theatres, founded in 1944 by the legendary actor Prithviraj Kapoor (1906-1971). Originally hailing from Peshawar, Prithviraj moved to Bombay (now Mumbai) in 1928, to try his luck in the emerging film industry. While he would go on to feature in several silent and talkie films, he also built a reputation in theatre. After he set up Prithvi Theatres in 1944, the first play it staged was the remake of a classic – Shakuntala. But it was the next play that set the tone for what this theatre company would go on to stand for.

The Royal Opera House in Mumbai|LHI

The play, Deewar (The Wall), (not to be confused with the famous movie by the same name, much later), written by Prithviraj himself along with Indian screenwriter Inder Raj Anand, was staged at the Royal Opera House in Bombay in 1945, and soon became a major hit. Based on a familiar plot – it was a family drama with two brothers squabbling thanks to the discord triggered by a ‘villain’, a woman – audiences saw in it the similarity with a dead-serious, real-life plot unfolding in the country at the time – the threat of Partition.

With all the pathos of a family drama, the writers of Deewar ensured great impact.

They underlined the angst of the brothers, who couldn’t bear to stay under one roof. The audience was then spellbound when a wall or a deewar came up on stage between the brothers as they split their joint estate in two. The audience gasped as they realized what the play was hinting at – Partition. In the final act, the wall caused discontent between local peasants and they staged a revolt to bring it down. In the end, the brothers realized their mistake, reconciled, and the woman was kept at bay.

A ‘What’s Playing’ board outside Prithvi Theatre|Christina Daniels

The play was a great success, drawing huge crowds to the Opera House, where it was first performed. One memorable performance was attended by Sardar Patel, the then Home Minister in the interim government. Originally, he had planned to make a token appearance but he sat through the entire play.

Deewar was Prithvi's take on contemporary politics, with allegorical references to the British Raj and the demand for a separate Pakistan. The dialogue of both the brothers and the woman were, in part, translations of Mohammed Ali Jinnah, Mohandas Karamchand Gandhi and T B Macaulay's speeches.

Prithviraj played the lead in Deewar, along with his three sons – Raj, Shammi and Shashi Kapoor.

Damayanti Sahni and Zohra Sehgal, two prominent Indian actresses of the 1940s, played the role of the ‘vamp’ at different times. Sehgal went on to work with Prithviraj Kapoor for 14 years as an actress and dance director after the success of Deewar.

In an article, ‘Theatre And Activism in the 1940s’, she wrote that while they were performing Deewar in different parts of the country, “Prithviraj travelled in the third class compartments… in spite of the fact that he had a first class pass as a Member of Parliament”. Prithviraj was a nominated member of the Rajya Sabha between 1952 and 1960.

Deewar was enacted in a language that was a mix of Hindi and Urdu, which during the 1940s was referred to as ‘Hindustani’ in North India.

Deepa Gahlot, a theatre critic who has co-written the book The Prithviwallahs, says Prithviraj had 50 to 60 people on stage and his plays would go on for about four and a half hours due to on-stage improvisations.

In 1947, Lai Chand Bismil, a friend of Prithviraj’s from Peshawar, wrote a play called Pathan (The Frontier Man). The play was about breaking the misconception of the Pathans as soodkhors (loan sharks) or darwans (gatekeepers). Prithviraj saw the relevance of this play to the current political scenario and got his company to develop it. On 13th April, 1947, Pathan was staged for the first time and became a huge success. The Prithvi Theatres enacted this play 600 times all over Mumbai.

In the following years, Prithvi Theatres staged Ghaddar (1948) and Ahooti (1949), which were also huge hits. Ghaddar was about the ironic situation of Indian Muslims, who despite having stayed back in India were called ‘Pakistanis’ and ‘traitors’ in India in the post-Partition era, while Ahooti addressed the Pakistani refugee situation in India that Partition had created.

This was followed by plays like Kalakar (1951) and Paisa (1953), which critiqued the rampant commercialization and greed that had swept a newly independent India, and Kisan (1956) on the exploitation of peasants. For 16 years, from 1944 to 1960, the company staged an incredible 2,662 performances across 112 towns and cities in India.

However, times were changing and with the rise of Hindi cinema, large travelling theatre companies were no longer viable. The Prithvi Theatres shut down in 1960, when Prithviraj became very ill. In 1962, he leased two plots of land in Juhu, one on which he built his residence and the other where he hoped to build a theatre.

A play being performed at the Prithvi Theatre |Wikimedia Commons

After Prithviraj’s death in 1972, his son Shashi Kapoor and his wife Jennifer carried his legacy forward and built Prithvi Theatre in 1978 in Juhu, where it is still active. Interestingly, Jennifer’s parents, Geoffrey Kendal and Laura Lidell, too owned a travelling theatre company, Shakespeareana.

In recent years, a few old plays of Prithviraj were remade and staged at Prithvi Theatre. Deewar (1945) was rewritten by Indian theatre director Sunil Shanbag and staged at the Royal Opera House in Mumbai on 3rd November 2018. 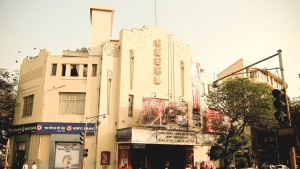 Prithvi Theatre continues to celebrate Prithviraj Kapoor's love for theatre and his belief that it has the power to hold up a mirror to society and facilitate social change.

Mumbai Cinema Maharashtra drama play Prithvi Kapoor
You May Also Like
Snapshort Histories
Jahangir’s Tomb: A Modern Marvel
By Nehal Rajvanshi
A large square monument in Lahore, now in Pakistan, pays tribute to a great Mughal Emperor, and a great love.
Snapshort Histories
Heera Mandi: Red-Light Area with a Royal Past
By Aashish Kochhar
Lahore’s oldest red-light district, Heera Mandi, was a centre of culture and sophistication with royal roots.
Snapshort Histories
Influenza 1918: The Disappearance of Memory
By Chinmay Tumbe
Over 20 million died in a matter of few months on the subcontinent during the influenza pandemic
Snapshort Histories
Feb 1948: The British March Out of India
By Aditi Shah
We take you the farewell ceremony held for the last British troops to leave India
Support
Support
Each day, Live History India brings you stories and films that not only chronicle India’s history and heritage for you, but also help create a digital archive of the 'Stories that make India' for future generations.