Ahmedabad, Gujarat’s commercial capital, traces its wealth to the textile mills that once dotted the city. But this was no random development; the city’s textile revolution was deliberately set in motion by one man, Ranchhodlal Chhotalal, whose legacy goes far beyond the industry.

It was largely due to the efforts of this one man that Ahmedabad made the transition from a trading town to the vibrant and modern city it is today.

Who really was this visionary and what drove him to these great heights?

Ranchhodlal Chhotalal was born into a Nagar Brahmin family in 1823. Since his community was actively involved in British service, he too joined the British East India Company, at the age of 19. After working his way up for a decade, Chhotalal was appointed as Assistant Superintendent of Panchmahal in Pavagadh, the highest position an Indian could reach in British local government in India when he was barely 30 years old.

However, in 1853, Chhotalal was accused of taking a bribe from the ruler of Lunawada state, a small princely state in present-day Gujarat, to facilitate his ascent to the throne. This led to his suspension from service, and although he was cleared of all charges, Chhotalal quit his job. He was disenchanted with British service and, when the lengthy legal proceedings came to an end in 1859, he was glad for the opportunity to turn his life around. He chose to become an entrepreneur.

Inspired by the Industrial Revolution and the great technological advancements in Britain, Chhotalal decided to set up a textile mill in Ahmedabad. Since the textile industry was creating thousands of jobs in Britain, he wondered, why not in Ahmedabad?

A textile mill in Britain|Wikimedia Commons

At this time, Ahmedabad was home to traditional traders and merchants whose lives centred on the pols. The city, which had been established in 1411 by Ahmad Shah of the Gujarat Sultanate, had changed many hands over time. It had been a prosperous city under the Mughals, from 1573 to 1758, when it was surrendered to the Marathas.

Under the Marathas, the city was a bone of contention between the Peshwas of Poona and the Gaekwads of Baroda. Its mercantile community suffered greatly during this tumultuous period, which ended in 1818, with a takeover by the British. The city was begging for a revival – and Chhotalal was ideally placed to drive this change.

He had first floated the idea of setting up a textile mill in 1850 and had even issued a prospectus to raise money and approach potential investors.

However, the proposed mill didn’t materialise at the time. Meanwhile, Kawasji Nanabhai Dawar, a prominent merchant in Bombay, opened the first spinning and weaving mill in Bombay in 1854, re-igniting Chhotalal’s dream to launch a textile mill of his own. He finally did, in 1859, and called it the Ahmedabad Spinning and Weaving Company Limited.

But it wasn’t all smooth sailing. Troubles came right at the start. The ship bringing the machinery for the company to India from England was lost at sea. Besides, the English engineer specially engaged for the mill died shortly after reaching India. This was before the plant had even arrived. When the machinery did finally arrive, it had to be transported from Cambay (present-day Khambhat) to Ahmedabad by bullock cart, which Chhotalal personally supervised.

The replacement engineers proved to be inefficient and four of them were fired in quick succession. Finally, Chhotalal hired a Mr Edington, an engineer, who installed the machinery and ran the factory successfully for the first two years. Chhotalal thus became only the second person to establish a successful textile mill in India. This was the first one in Ahmedabad.

S M Edwardes and H E M James, British civil servants who were also Chhotalal’s biographers, state that the mill initially paid a dividend of 6 per cent, which later rose to 9 per cent. It was so successful that Chhotalal, an intrepid entrepreneur, opened the second one in 1872. And when a fire destroyed it 3 years later, in 1875, he rebuilt it without asking his shareholders for assistance. In no time, he wiped out the losses sustained due to the fire and even set up a third mill in 1877.

Chhotalal set the ball rolling and he was such a success that, by 1916, just 15 years after his death, there were 62 mills in Ahmedabad and its vicinity. This gave Ahmedabad the moniker ‘Manchester of the East’. Chhotalal’s success can be attributed to his discipline. He stayed away from speculative schemes, didn’t over-expand his textile business and made sure his mills were run efficiently.  He visited them every day and interacted with the workers.

Not surprisingly, he was called the ‘Merchant-Prince of Gujarat’.

But our merchant prince was made for even bigger and better things. He made significant contributions to civic life and was appointed Chairman of the Municipality by the Bombay Government in 1883. During this time, parts of Ahmedabad were a cesspool, quite literally, its unsanitary conditions making it a breeding ground for disease and epidemics. Things were so dire that Ahmedabad’s mortality rate was the second-highest for any city in the Bombay Presidency.

Chhotalal embarked on a mission to improve Ahmedabad. He suggested that the government focus on decongesting the city and cleaning up its streets, and significantly contributed to the introduction of modern water supply and sewerage systems in the city. While we assume that these are basic necessities, it was an uphill task for Chhotalal, who ironically faced opposition from the people of Ahmedabad themselves!

The citizens were against the idea of piped water, and his plan was pitted against misconceptions, rumours and false beliefs. But Chhotalal was an ingenious man – he took the help of the Ahmedabad-based poet, Kavi Dalpatram, to dispel these misconceptions and spread awareness. Dalpatram wrote a poem emphasising cleanliness which was then recited at community gatherings.

Chhotalal carried out detailed surveys, studies and comparative analyses to convince the citizens and civic officials, and finally laid the foundation of a modern drainage system in Ahmedabad. This not only improved living conditions considerably, but his work was also noticed by Florence Nightingale, the British social reformer who noted:

“Ahmedabad is working splendidly at water supply and sewerage under its native president Mr Ranchhodlal Chhotalal... we hope the good example will be followed by other cities.”

This was the Victorian era, where driven by public service, noted Bombay-based industrialists and philanthropists like Jagannath Sunkersett and Jamsetjee Jeejeebhoy were creating public institutions like colleges, schools and hospitals to improve the lives of the people of Bombay.

Chhotalal was inspired to follow in their footsteps and, after driving an urban renewal in Ahmedabad, he was now ready to bring about social change. He opened the first high school in the city, called R C High School, in 1846; and the first women's hospital in Ahmedabad, called Victoria Jubilee Hospital, in 1865. He was also responsible for restarting Gujarat College in 1879.

Gujarat College in the present|Wikimedia Commons

He financially supported the Gujarat Vernacular Society to start a girls’ high school, now named R B Ranchhodlal Chhotalal Girls High School, in 1892. He also started an endowment fund – the Ranchhodlal Chhotalal C I E Research Award Endowment – to help bright but poor students complete their education. For his work, he was awarded the title of Rai Bahadur and was also made a Companion of the Order of the Indian Empire. 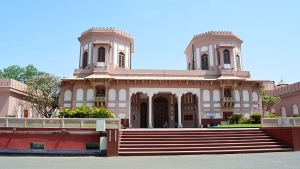 Chhotalal passed away in 1898, at the age of 76, a loss that was felt by people across caste, class and community lines in Ahmedabad. His son Madhavlal died just 3 years after he did, but his grandson Chinubhai was an able heir and was even made a Baronet by the British government. He was one among only four Indians, and the only Hindu, to be given that title.

Go to Ahmedabad today, and you will see Ranchhodlal’s legacy everywhere - in schools, hospitals, streets and havelis. His legacy lives on through the many institutions he set up, in the city he so loved.