The Revolt of 1857 was a turning point in the history of India, shaking the foundation of British rule on the sub-continent. The tinderbox of the Revolt was Meerut, where in 10th May 1857, Indian sepoys in the British-India Army violently and openly rebelled against the British East India Company.

The rebellion spread, and in time, martyrs and leaders of the Revolt came to be revered as pioneers of India’s struggle for freedom. While names like Rani Lakshmibai of Jhansi, Nanasaheb Peshwa, Tatya Tope and Begum Hazrat Mahal are celebrated across India, there were others whose names have slipped into obscurity.

The truth is that while we think of North India as the theatre of the Revolt, the uprising reached the remotest of tribal areas in Maharashtra and Chhatisgarh.

This is the story of Baburao Sedmake, who led the revolt of the Gonds in 1857, in present-day Chandrapur and Gadchiroli districts of Maharashtra. Then known as ‘Chanda’ district in the British-ruled Central Province, the region was brought under the British in 1854, through Lord Dalhousie’s infamous ‘Doctrine of Lapse’, when the Raja of Nagpur died without an heir.

The British assumed charge of Chanda in March 1854 and R S Ellis of the Madras Civil Service became the first District Collector of Chanda. There were several zamindaris (a grouping of villages under the Zamindari System) in the district that were owned by Raj-Gond families. These even predated the arrival of the Marathas in the 18th century. Naturally, these families greatly resented the British, especially the usurping of their land.

Map of the Central Provinces

One such zamindari was that of Molampalli, which comprised 24 villages in present-day Chandrapur district. Baburao Sedmake, the Zamindar of Mollampalli, was a young man of 25. He was born in Kishtapur village in Aheri tehsil of Gadchiroli district on 12th March 1833 but not much is known about his family or his early life.

In early March 1858, Sedmake assembled a force of 500 tribal youth, from the Gond, Maria and Rohilla (formerly in the Nizam’s service) tribes in adjoining regions and prepared an exceptionally fearless army. With this force, he was able to capture the entire Rajgad pargana of Chanda district.

When news reached Chandrapur, the District Collector, Mr Chrichton, deputed a unit of the British army to quell the rebellion. British forces met Sedmake’s army near Nandgaon-Ghosari on 13th March 1858. A decisive battle was fought between them, where Sedmake emerged victorious. He completely routed the British army, while inflicting serious losses of men and equipment.

Sedmake was soon joined by Vyankat Rao, Zamindar of Adpalli and Ghot. The two leaders then openly declared war against the British and, collecting a mixed force of over 1,200 Rohillas and Gonds, faced off against the troops sent to counter them.

Their combined forces marched northward towards Gadhi Surla fortress and brought the area under their direct control.

When Chrichton learnt of this, he sent another unit, which surrounded the hillock. But Sedmake’s army was not fazed. His men pelted stones at the troops, and didn’t let up till the troops retreated with heavy losses!

Crichton then sent in reinforcements which were commanded by Lieutenant John Nuttall, Commanding Detachment (Adjutant) of the 2nd Regiment Nagpur Irregular Infantry. Both these forces clashed again, first at Saganapur on 19th April 1858 and then at Bamanpet on 27th April 1858. The two sides battled it out bitterly and, again, Sedmake and his men emerged victorious.

Buoyed by his success, Sedmake, on the night of the 29th April 1858, attacked the telegraph camp at Chinchgundi on the Pranhita River in the Aheri zamindari. To the tribals of the region, these endless telegraph wires running across the countryside appeared to be a diabolical device to bind the people in slavery. The British force pursued them but suffered defeat for the third consecutive time, on 10th May 1858.

Crichton then decided to switch tactics. He told Rani Lakshmibai, the Zamindarini of Aheri, that if she failed to apprehend Sedmake, she would be prosecuted for harbouring and assisting the rebels, and her zamindari would also be usurped.

The threat had the desired effect and Lakshmibai readily offered her help.

Representation of the revolt at the memorial|Amit Bhagat

But while he was being taken to Aheri in fetters, he managed to escape, assisted by his guards, who were Rohillas. Thereafter, Sedmake continuously plundered territories under British control and posed a formidable threat to them. Lakshmibai’s forces were able to recapture Sedmake, on 18th September 1858, and handed him over to Crichton.

Sedmake was arrested and brought to Chanda. A case was filed against him and serious charges levelled. On 21st October 1858, the following verdict was announced:

1. From the evidence produced, the prisoner (Baburao) is found guilty of the rebellion against the British Govt, of having collected armed men and opposed the troops of the Government at the villages of Ghot on the 10th of May 1858 and at Bamanpeth on the 27th of April 1858, of having caused his armed followers to make prisoners of two troopers in the service of the British Government, and after they were brought before him, robbing and keeping them as prisoners for about 12 days, of having caused his armed followers to attack the camp of Mr Gartland & Hall at Chunchgundi on the 29th of April 1858 and receiving the stolen property of the above Gartland & Hall, well knowing that it had been acquired by the murders of both Gartland & Hall.

2. The court, having found the prisoner guilty as above and taking into consideration he was the leader of the disturbances in the district and that he had no cause for acting as he did, proceeds to trap in him the following sentence.

3. That you, Baboorao, son of Poolaisur Bapu, be hanged by the noose until you are dead and the execution thereof is ordered to take place this afternoon at 4 o’clock in the gallows, in front of the jail at Chandah.

4. The whole of his estates or property of whatever description is hereby ordered to be confiscated by W H Chrichton off. Dy Commissioner & Commissioner of the District, Chandah, under Act XIV of 1857.

On the same day, at 4.30 pm, Sedmake was hanged in Chandrapur Jail. His fellow companions had also been tried by the court and various verdicts pronounced against them. Some were hanged to death, while others were sentenced to life imprisonment.

According to local folklore, Sedmake had shamanic powers, due to which when hanged, he managed to break the noose four times.

Therefore, he was finally immersed in quick lime and killed. Another popular and widely accepted belief claims that Sedmake was tortured and hanged from a pipal tree in the open space outside Chandrapur Jail.

Meanwhile, Sedmake’s associate, Vyankat Rao, escaped and sought asylum in the Kingdom of Bastar, where he tried to assemble a force against the British. He was captured by the Raja of Bastar and handed over to the British. He was tried at Chandrapur and sentenced to life imprisonment with forfeiture of all property, due to the successful mediation of his mother Nagabai in 1860. This marked the end of the revolt in the region.

Lakshmibai of Aheri was splendidly rewarded for her timely help. The Zamindari of Adpalli and Ghot, consisting of 67 villages, was handed over to her. Crichton, for the services he rendered, was given the title ‘Companion of the Bath’. 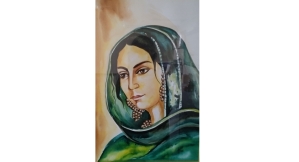 Today, a small memorial stands at the site where Baburao Sedmake was hanged in Chandrapur. While the Revolt of 1857 in Chandrapur and surrounding regions has been all but forgotten in the rest of India, it lives on through tribal folktales and songs among the locals, who proudly recount the bravery of Baburao Sedmake.

British British East India Company Maharashta Freedom Struggle 1857 revolt independence freedom fighter
You May Also Like
Snapshort Histories
Krishnadevaraya and Chinnadevi: A Romance
By Srinivas Reddy
A story from his personal life of Krishnadevaraya of Vijayanagara Empire, as told by Srinivas Reddy in book ‘Raya’
Snapshort Histories
Mumbai and the Great Naval Mutiny
By Aditi Shah
This bold rebellion shook up the British administration in India
Amazing India
A Mumbai Church and its ‘Afghan’ Connection
By Aditi Shah
A church that honours soldiers who lost their lives in a deadly game of one-upmanship between two great empires
Snapshort Histories
Checkmate from India
By Aditi Shah
Adapted over centuries, the always popular game of Chess traces back its origins to ancient India.
Support
Support
Each day, Live History India brings you stories and films that not only chronicle India’s history and heritage for you, but also help create a digital archive of the 'Stories that make India' for future generations.