A young king destined to be an empire builder meets an enchanting dancing girl who leaves him smitten, and lo and behold, he decides to marry her – creating an uproar! When you think of the powerful image of the one-eyed warrior and empire builder, Maharaja Ranjit Singh of Punjab, it is hard to imagine that as a 22-year-old, he was prepared to accept social outrage on the command of the Akal Takht, for wanting to marry a Muslim nautch girl. Here’s the fascinating story of Ranjit Singh and his queen Moran Sarkar.

Moran Sarkar went on to become the Muslim wife of Maharaja Ranjit Singh but she scarcely finds mention in the history books.

To find her, you have to head to the Papar Mandi area inside Lahore’s Shah Aalmi gate. Here, you will find a small mosque that bears her name on the front entrance. The inscription says the mosque was built by Moran in Hijri 1224 (1809). It was called the ‘Masjid-e-Tawaif’ till a decade ago but it is now known as ‘Masjid Moran’.

Moran was a Muslim nautch girl originally said to be from Kashmir and who lived in the small village of Makhanpur, close to Amritsar. According to legend, the young Maharaja Ranjit Singh once saw her performance in the royal Baradari (pavilion) in Dhanoa Kalan village, and was so impressed with her lithe movements that he fell madly in love with her. He thus gave her the title ‘Moran’, meaning ‘peacock’.

Another local legend links a small bridge to her, on the Indo-Pak border in Pul Kanjri village, around 35 km from Amritsar. The story goes that one day, when Moran was coming to the Baradari for her dance performance, her anklet/shoe fell into a canal while she was crossing it. She was so enraged that she declared that she wouldn’t perform until a bridge was built over the canal. A besotted Ranjit Singh quickly built a bridge at the site and it stands here to this day. It is called 'Pul Moran'.

To cut a long story short, the young Ranjit Singh was so in love with Moran that he proposed marriage to her and agreed to all the conditions she laid down to be his wife, the main one being that he take permission from her father. The love-struck Ranjit Singh complied humbly.

The two got married with great fanfare in 1802. The processions began at Lahore’s Shalimar Bagh. Samad Joo Kashmiri, a renowned noble during Ranjit Singh’s reign, who was also a wealthy businessman, acted as Moran’s father during the ceremonies, even taking care of all the bride’s expenses. The marriage is said to have taken place in his haveli in Amritsar. After the wedding, the couple went to Lahore and Moran was given her own beautiful haveli or villa, specially constructed by the Maharaja for her in the Papar Mandi area inside Lahore’s Shah Aalmi gate.

Ranjit Singh and his wives

Historical chroniclers like Maharaja Ranjit Singh's personal royal diary writer Sohan Lal Suri in his book Umdat-ut-Tawarikh, and Ranjit Singh's noted noble Diwan Amarnath in his Zafarnama-i-Ranjit Singh, mention Moran's abilities as a competent and able administrator. She set her own court in the haveli and listened to the grievances of people.

She was a close confidant and advisor to the Maharaja and soon as she was given the title of ‘Moran Sarkar’ by the locals. On her request, Maharaja Ranjit Singh also constructed a mosque close to her haveli – now known as Jamia Masjid Tarro Moran. Tarro is a Persian phrase meaning revolving. Moran’s dance carrier of her early years was mentioned to be famous for fast round revolutions. Thus, she earned the name.

Interestingly, many accounts paint Moran as a popular ‘people’s queen’. They also credit her with the building of the Shivala temple in the Lahore Fort and a madarsa in 1823.The esteem that Moran enjoyed during her time is evident from the fact that between 1802 and 1827, a series of coins was introduced by the Sikh empire’s mint, known as ‘Moranshahi’. These coins had a peacock’s feather inscribed on them and were symbolic of her.

Moran had met Ranjit Singh when he had a small kingdom not stretching more than a few miles from the capital city of Lahore. But she died very young and couldn’t watch her husband become the empire builder that history knows him to be. There are no records of the date or the cause of her death, except that it was a 'natural' one.

Ranjit Singh’s chroniclers, like diplomat and historian Fakir Syed Waheeduddin in his book The Real Ranjit Singh, mention how heartbroken the Maharaja was when he lost Moran and how he often remembered her.

Moran is today regarded as Mai (Mother) Moran in Pakistan and the mosque she constructed in Papar Mandi in Lahore is named after her. The residents there believe she was a great lady, who did a lot of good for the people. In contrast, in Indian Punjab, she is described in disrespectful terms such as ‘Kanjri’ and ‘Tawaif’ due to the stigma of being a nautch girl before her marriage. Similarly, the bridge built by Maharaja Ranjit Singh according to Moran’s wishes also came to be known as ‘Pul Kanjri’ by the locals after the fall of the Sikh empire.

The legacy of Moran means different things to the people of India and Pakistan. While the former still assign her ungracious names due to her past, the later consider her a generous queen worthy of respect. 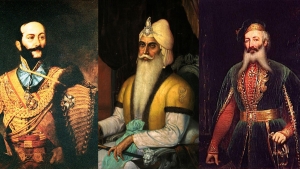 Punjab royalty love
You May Also Like
Snapshort Histories
Ghulam Yazdani: First Indian Chronicler of the Deccan
By Kurush Dalal
What do the historic sites of Bidar, Mandu and Naldurg and the Ajanta and Ellora caves have in common?
Snapshort Histories
Clock Tower of Amritsar: Casting a Long Shadow
By Aashish Kochhar
Once, the Lal Chabutra defined Amritsar’s skyline, casting an imperial shadow over the Golden Temple
Snapshort Histories
In the Footsteps of Ram
By Krutika Haraniya
Ram is said to have passed through, across the Indian Subcontinent. This Dussehra we trace the journey of Ram.
Amazing India
Mahabaleshwar: More Than Strawberries
By Aditi Shah
A historic hill station is Maharashtra today serves as a weekend spot as well as a pilgrimage centre
Support
Support
Each day, Live History India brings you stories and films that not only chronicle India’s history and heritage for you, but also help create a digital archive of the 'Stories that make India' for future generations.