This article could well have been written in Dutch. Few in India realize that for almost 150 years during the early phase of European colonialism, when trading companies were setting sail for the rich Indian subcontinent, it was the Dutch who were the dominant players in trade. So successful were they, that their primary trading arm, the Dutch East India Company or Verenigde Oost-Indische Compagnie (VOC) as it was known, became the first global multinational company. With many firsts to its credit, the Dutch East India Company or VOC was instrumental in the introduction of many of the concepts that we take for granted in stock markets across the world. But the Dutch East India Company fell almost as fast as it rose. But even today you will find hints of the Dutch influence in stray words in Bengali, old forts in a village in Kerala and gravestones in the cemetery in Surat.

Dutch East India Company was formed to cater to the growing demand for Indian spices from Asia.

Established by a charter in 1602 CE, two years after its more famous peer the East India Company, the Dutch East India Company or the VOC was formed to cater to the growing demand for Indian spices from Asia.  It made such a grand success of it that it became the world’s first multinational corporation in a modern sense.

It began trading in India on the 11th November 1604 after a treaty was signed between the Zamorin of Calicut and the head of the Dutch fleet, Admiral van der Hagen. The Zamorin wanted to use the Dutch to get the Portuguese out of the Malabar coast. The Dutch wanted to the same, as they wanted exclusive rights to trade. Under the treaty, they ‘promised to support each other as long as the sea and the sun’. The Dutch made two attempts, in 1604 as well as in 1639, to defeat the Portuguese but both ended in failure and Malabar remained under Portuguese influence.

Painting of a view of Masulipatnam in 1676 CE|Wikimedia Commons

A floral pattern fabric from India was used to make traditional dresses for Dutch women in the 17th century can also be seen today in Hindeloopen, where they still make similar dresses

Meanwhile, attracted by the textiles of the Coromandel coast, the Dutch established their presence on the East coast of India. In 1608, they built their first factory at Pulicat, around 60 km north of Chennai, with permission from the Vijayanagara rulers. Soon they put up more factories and trading stations all along the coast of present-day Andhra Pradesh and Tamil Nadu, in places like Masulipatnam, Nizampatnam, Nagapattinam, Sadurangapattinam and even as far as Golconda. Apart from the cotton textiles, they traded in silk, indigo and Golconda diamonds. The most highly prized was the Coromandel Chintz, a calico fabric in a floral pattern, used to make traditional dresses for Dutch women. Today, this craft can only be seen in the Dutch city of Hindeloopen, where they still make dresses from the Chintz designs imported by the Dutch in the 17th century.

Over the next few decades, the Dutch went on to establish their trading centers throughout India, from Surat in 1616 to Bengal in 1627. Gujarat was one of the richest provinces in Mughal Empire and Surat was its principal port.  The opulent tombs at the Dutch cemetery in Surat are the only remnants of the once thriving presence here.

In Bengal, apart from their main settlement at Chinsurah, 35 km north of Kolkata, they also had factories in Dhaka, Murshidabad, Patna among other places. Interestingly, a hint of Dutch influence can be seen in Bengal through the names of playing cards in Bengali. Three of the four names of the suits have been a derived from Dutch. These include the Ruhiton, Haroton and Ishkapon which correspond to Ruiten, Harten and Schoppen, which are Dutch names of diamonds, hearts and spades. From 1621 to 1720, the Dutch East India company also had a  ‘Liaison office’ in the imperial Mughal capital of Agra.

Despite the quick spread of influence, it took the Dutch 57 years to defeat the Portuguese and get trading rights in Malabar. In 1661, the Dutch East India Company captured the entire Malabar region from the Portuguese, having captured Kollam and then Kochi the following year. Having established their power, they refused to give Zamorin any territory, who promptly allowed British to set up a factory in 1664.

The defeat of the Portuguese meant that the Dutch were now masters of Pepper trade and they earned huge profits through a monopoly of this commodity that was known as black gold in Europe.

The Dutch East India company was making history by emerging as a major multinational and a stock market darling.

If this was the growing Dutch influence in India, back in Amsterdam, the Dutch East India company was making history of a different kind, by emerging as a major multinational and a stock market darling.

The Dutch East India company’s corporate milestones were remarkable.  It was the world’s first limited liability company and the first to be listed on a formal stock exchange. Its IPO was a complete sellout at the newly formed Amsterdam Stock Exchange, where not only the Dutch but even Belgian and German merchants vied to buy its shares. Its shares were so prized and heavily traded that a number of stock market innovations such as futures contracts, short selling, and options were introduced for it. In 1622, it saw the first known ‘Shareholder revolt’ who complained that the company balance sheets were being ‘cooked up’ and demanded a ‘reeckeninge’ or a proper financial audit, leading to government regulation.

But the good days didn’t last long.  From the mid-18th century onward, the Dutch East India Company began a period of decline. There were numerous factors contributing to its fall, many of which hold lessons for mega-corporations even today.

As a publicly listed company, VOC was consistently offering high dividends to its shareholders year on year. This meant that the company could not build sufficient cash reserves to tide over bad days. There were times when dividends were higher than even the income of the company. Another factor was the corruption of employees. Posted far away, and with difficulties in communication, the employees made vast fortunes indulging in private trade and passing on losses to the company.

From the mid-18th century, the Dutch East India Company began to decline.

There were also political changes which affected the fortunes of the company. Till the early 18th century, the Dutch East India Company had always relied on its military might to dominate trade, but its power began shrinking. In 1741, Dutch faced a crushing defeat at the hands of the powerful Martanda Varma, the ruler of Travancore in the battle of Colachel.  Following this defeat, the Dutch never regained their power and influence in Malabar. They were in fact forced to cede their dominant position in the Pepper trade to the Travancore kingdom.

The Fourth Anglo-Dutch war (1780-1784) was the last nail in the Dutch East India Company’s coffin. A number of its ships were sunk by the British navy and trading posts in India too were captured by the British. The direct losses were valued at millions of pounds and with loans taken to the keep the company running, the actual value of the company was reduced to zero. The company faced bankruptcy in 1799 and its holdings were transferred to the Dutch Crown. 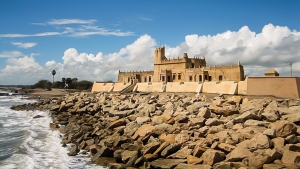 For the next 25 years, the Dutch possessions in India continued to languish and most of the trading posts and factories were shut down. Finally on 1st of March 1825, under the Anglo-Dutch treaty, all the Dutch possessions in India were transferred to the British. This marked the end of the Dutch colonial rule in India. Today, the legacy of the Dutch East India Company, the world’s first multinational corporation can be seen in a few Dutch churches, forts and cemeteries spread across towns and cities across India.

Dutch East India Company Bengal port trade Portuguese Surat kochi south india Dutch
You May Also Like
Snapshort Histories
Feb 1948: The British March Out Of India
By Aditi Shah
We take you the farewell ceremony held for the last British troops to leave India
Snapshort Histories
Ékushé: How Language Trumped Politics to Birth a Nation
By Sudeep Chakravarti
The creation of Bangladesh is rooted in linguistic oppression as much as subsequent political schism
Snapshort Histories
Wooing Arunachal: Blueprint For A Geopolitical Hotspot
By Verrier Elwin
Verrier Elwin, a foreign missionary-turned-Gandhian, framed a newly Independent India’s battle in the North-East
Snapshort Histories
Gas, Electricity and Publicity in Colonial India
By Awadhendra Sharan
When was gas first introduced to India? How was electricity promoted to the public?
Support
Support
Each day, Live History India brings you stories and films that not only chronicle India’s history and heritage for you, but also help create a digital archive of the 'Stories that make India' for future generations.