Lepchas and the Battle They Won

While community heritage forms part of a larger umbrella of Intangible Cultural Heritage (ICH) and is given great importance globally, is enough being done to protect the indigenous communities in India? Few realize that India is home to more than 600 tribal communities and many among them are fighting to keep their traditions and identity alive. Here is a story from the far reaches of Sikkim, of how a community rose to protect their land and their culture and found a novel solution.

In 2006,  members of the indigenous Lepcha community in Sikkim rose against plans to build a series of dams on the Teesta River, for a hydropower project. The reason for their angst was that this project was being planned right within the boundaries of the land demarcated as their sanctuary or reserve – Dzongu in North Sikkim. The local communities were worried that these dams would cause irreparable damage to the region’s ecosystem.

These protests further snowballed as they gathered support from the wider community and led to massive hunger strikes and roadblocks in June 2007 which lasted for 93 days. The protests worked and the government decided to scrap four out of six hydel projects in the Dzongu reserve. The remaining two which were to be built on the Rongyong, a tributary of the Teesta River are still under construction.

Interestingly, the fight against the dam led to a great outcome, which was the emergence of a new way of sustainable livelihood for this small community.

People of Lepcha community amidst their daily chores |Kritika Sarda

The Lepchas are an indigenous community,  largely concentrated in Dzongu, a tribal reserve spread over 15,846 hectares of hilly terrain in the North Sikkim district of Sikkim with a population of approx. 7,000, along the Indo-China border. While they are also found in parts of Nepal, Bhutan and the Darjeeling hills, the largest number - according to the 2006 survey, 45,239 are in Sikkim.

The  Lepchas still follow their old animistic beliefs. Mountain peaks, rivers, lakes and hot springs and the Teesta River and Mt. Kanchenjunga (the 3rd highest peak in the World)  locally referred to as Khangchendzonga are their main deities. Their priests follow age-old shamanistic rituals and are called Muns and Bongthings. Primarily involved in agriculture and closely linked to the land, it is not surprising that the Lepchas rose against what they saw as an attempt to destroy all that they held dear in 2006.  The problems threw up a solution too.

It all started when amidst the agitation, a new organisation was born.  The Affected Citizens of Teesta (ACT) organisation came up with sustainable options which not only generated substantial revenue but also played to the strengths of the community capitalising on its status of being a unique indigenous community in the valley of Dzongu.

In the latter half of 2008, fresh college graduates turned activists Gyatso Lepcha, Kachyo Lepcha, Tenzing Lepcha and Dupden Lepcha initiated homestays in Dzongu as their flagship project as an alternative to the dams. This generated employment and gave a leg up to the local economy.

According to Kachyo Lepcha, Assistant Professor, Lepcha department at Sikkim University, the initiation of home-stays not only brought a sense of pride among the community but it also led to the revival of the traditional Lepcha cuisine such as Buckwheat pancakes, and various tubers and roots among the younger generation.

The home-stays which started off as a community initiative to sustain their basic livelihood in 2008, catapulted in 2012 when the government showed keen interest and started sponsoring the locals in Dzongu to encourage them to develop eco-tourism. The government saw a great economic potential and ability to attract off-beat tourists to witness and experience the unique culture of the region and its people.

Prince of Norway, Haakon Magnus with his family in Sikkim |Kristi Marie Skrede via www.Royalcourt.no

The home-stays and the tourists it attracted, also led to the emergence of ancillary business opportunities in forms of tourist guides, car rentals, tour operators and local shops, thereby leading to the holistic development of the community.  One prominent tourist whose visit the community cherishes even today was that of the crown prince of Norway in 2010.

Today as part of the initiative, the government also sponsors the Lepcha festival of Tendong Lho Rum Faat which is celebrated on 8th August every year.

In 2016, when the Khanchendzonga National Park was declared a World Heritage site by UNESCO, it was a unique registration for India as this was the first site in India to be ratified as a mixed site which recognized the natural heritage of the region and the communities and their connection with the natural elements like caves, rivers, lakes, etc as a site of Outstanding Universal Value. UNESCO by recognizing the Lepcha reserve as an important part of the core area as well as buffer area of the site has acknowledged these sacred meanings, stories and practices as an integral part of Sikkimese identity.

In retrospect, the protest was not so much against economic development as it is for safeguarding the nature-culture ties of a 7,000 strong community that echoes in their lifestyle and identity, even today. 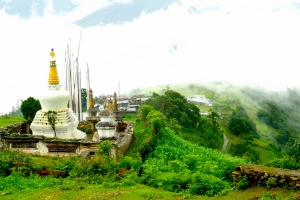 Thembang: A Fortified Village with a Lesson to Share

The case of Lepchas and their battle towards getting their unique culture and identity recognized has been an uphill journey. The community members took matters into their own hands and transformed a crisis into a great opportunity that has meant the sustainable growth of the community and protection of a rare and beautiful ecosystem.

Sikkim community Heritage
You May Also Like
Snapshort Histories
Feb 1948: The British March Out Of India
By Aditi Shah
We take you the farewell ceremony held for the last British troops to leave India
Snapshort Histories
Ékushé: How Language Trumped Politics to Birth a Nation
By Sudeep Chakravarti
The creation of Bangladesh is rooted in linguistic oppression as much as subsequent political schism
Snapshort Histories
Wooing Arunachal: Blueprint For A Geopolitical Hotspot
By Verrier Elwin
Verrier Elwin, a foreign missionary-turned-Gandhian, framed a newly Independent India’s battle in the North-East
Snapshort Histories
Gas, Electricity and Publicity in Colonial India
By Awadhendra Sharan
When was gas first introduced to India? How was electricity promoted to the public?
Support
Support
Each day, Live History India brings you stories and films that not only chronicle India’s history and heritage for you, but also help create a digital archive of the 'Stories that make India' for future generations.