Most of us relate Jainism with its founder Mahavir the prince of Kundagrama in present day Bihar, who renounced his material wealth to set up the foundation of the formal Jain faith in the 6th century BCE, 32 years before the Buddha set out on his path. But according the Jain philosophy which Mahavir formalised, he was only the last of the 24 Tirthankaras or Jinas - the enlightened souls who laid the foundations of the philosophy .

Kalpasutra is the Jain religious text containing the life histories of all the 24 Tirthankaras and it is said to have been complied 150 years after the Nirvana of Mahavir (527 BCE) by saint Bhadrabahu. According to the Kalpasutra, it was Adinatha, also known as Rishabha, who was first Tirthankara of the Jains. He is supposed to have been born 8,400,000 years ago . The scriptures also suggest that he was the first one to bring agriculture and start the institution of marriage. He had several sons, of whom the eldest was Bharata who became the first Emperor of Ancient India and his youngest son was Bahubali. Some Hindu Puranas mention the name of Rishabhanath. According to the Bhagavata Purana for instance, Rishabha was an incarnation of Lord Vishnu.

One of the most interesting Tirthankaras is Mallinatha, the nineteenth Tirthankara. The Tirthankara is believed to have been a woman and while there is a division of opinion on this, believers say so pious was she, that she did all the twenty things that make an ascetic a Tirthankara or enlightened one. Nothing could prevent her ascension. However the older Digambara sect of Jains claim that Mallinatha was a woman and she was reborn as a man to became a Tirthankara. Jains are broadly divided into 2 sects - the Digambaras and the Svetambaras. One of the reasons for the diversification among the sects was the spiritual status of the woman. The Digambara sect of Jainism believe that a monk shouldn’t possess any piece of clothing and women cannot live a truly ascetic life, because they have to possess clothes since it is impractical for them to live naked.

Another important Tirthankara is Neminatha, the twenty-second Tirthankara. It is believed in Jainism that Neminatha was the cousin of Hindu God Krishna and has the same dark complexion as Krishna. Painting depicting his life stories generally identify him as dark colored.

Parshvanatha, the twenty-third Thirthankara is said to have lived two centuries before Mahavir. He is believed to have been born in the city of Benares around 817 BCE.  Parshvanath is considered to be a historic figure and the one who originally professed the Jain religion. Both Jain and Buddhist scriptures support the idea that Vardhaman Mahavir was a reviver and reformer of an already existing religion.

The philosophy of Jainism as we know it was formalised by the last of the Tirthankaras, Vardhaman Mahavir (599 BCE) who was born 32 years before Buddha (567 BCE) and is the most famous of all.

The Jain Tirthankaras are represented either seated in padmasana or standing in meditation. For the uninitiated all the Tirthankara idols look similar but they are differentiated on the basis of symbols or emblems (lanchhana). All Tirthankaras have separate lanchhana associated with them and this is generally carved on the bottom of the idol for their identification. For instance the lanchhana of the first Tirthankara is a Bull; of Mahavir is a lion and of Neminatha the 22nd Tirthankara, it’s a conch shell. One of the most recognizable Tirthankaras is Parshvanatha who is shown with a snake crown over his head as his lanchhana is the snake. The first Tirthankara Adinath can be identified with locks of hair falling on his shoulders.

The four Tirthankaras, Adinath, Neminath, Parshvanath and Vardhaman Mahavir attract the most devotees and have big temples dedicated to them all over the country. The spectacular temple of Ranakpur in Rajasthan is dedicated to Adinath. The Saavira Kambada Temple in Karnataka noted for its 1000 pillars is one of the few temples dedicated to Chandraprabha, the eighth Tirthankara. The historic Lal Mandir dedicated to Parshvanath, the 23rd Tirthankara is right opposite the Red Fort in Delhi and was originally built in the 17th century CE.

If you go to Palitana, you will get a chance to see all the Tirthankaras in a complex that is estimated to have as many as 823 temples, of varying size, strewn across the hill. Each of these temples has rich carvings on the marble. The highest temple here is the Adishwara temple that can be reached after a steep climb - over 3,750 stone steps. 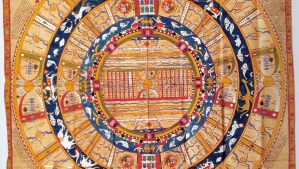