Nanak Singh: Power of the Pen

In the year 1920, an epic poem Khooni Baisakhi shook the British administration in Punjab. It was a heart wrenching and angry account of the Jallianwala Bagh massacre, penned by a survivor who had witnessed the ruthless brutality and watched his friends die. The poem, which was so long that it ran into a booklet, was banned and all the published copies burned in Punjab. The young man who wrote it - Nanak Singh, went on to become one of the greatest literary giants of Punjab!

Nanak Singh’s life was one of triumph against all odds. He was born to a very poor family in the Jhelum district of Punjab in 1897 CE. His parents couldn't afford to educate him so Nanak Singh taught himself, even becoming a best-selling author by the time he was 21! His first publication, a set of Sikh religious hymns written in 1918, sold 1,00,000 copies!

However, it was the Jallianwala Bagh massacre which changed Nanak Singh as a writer. Seeing the horrific tragedy unfold before his eyes as British commander General Dyer ordered his troops to open fire at a group of peaceful revelers in 1919, and his own close call with death, made him pick up the pen and write a series of books against the oppressive and violent British rule in India.

In 1920, an epic poem Khooni Baisakhi shook the British administration in Punjab

Though Nanak Singh went on to write 36 books over the next four decades, just one copy of the first print of the book Khooni Baisakhi survives today. Destroyed by the British after it was published, a copy of the book managed to make its way to England and it was brought back later in 1970s, thanks to the efforts of the late President of India, Gyani Zail Singh.

Nanak Singh often courted controversy through the books he wrote because they were honest and made pertinent points. Each of his books had a social message and much like the man he called his inspiration- writer Munshi Premchand, Nanak Singh used the power of the pen to inspire people and uplift society.

Nanak Singh often courted controversy through the books he wrote

His famous novel Chitta Lahu (White Blood), was translated into Russian by Natasha Tolstoy, granddaughter of novelist Leo Tolstoy. Another one of his novels, Pavitar Paapi (Saintly Sinner) originally published in 1942, is currently in its 28th reprint in Punjabi. This book was not only translated into several Indian languages, it was even made into a Hindi film (by the same name) by his admirer, actor Balraj Sahni.

Nanak Singh was not just a prolific and successful writer, he represented the old world of literary giants who had a deep connect with society and strived to inspire change. It is a testimony to the power of Nanak Singh’s pen that he continues to inspire generations of his readers even 100 years later! 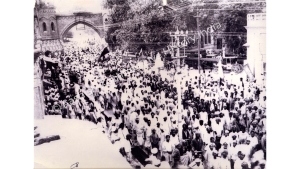 Jallianwala Bagh: Lifting the Veil
British Punjab Poet Literature massacre
You May Also Like
Snapshort Histories
The Illustrated Constitution of India
By Anshika Jain
The original manuscript of the Constitution of India had illustrations to depict the character of the country
Snapshort Histories
Rani Jindan Becomes Maharaja Ranjit Singh’s Youngest Wife
By Chitra Banerjee Divakaruni
The story of Rani Jindan, youngest wife of Maharaja Ranjit Singh of Punjab as told by Chitra Banerjee Divakaruni
Snapshort Histories
Gulistan-e-Eram: Playground of a Nawab
By Abid Khan
From pleasure palace to a murder scene… Catch the exciting story of Lucknow’s Nawabi-era Gulistan-e-Eram
Snapshort Histories
Food for Thought: Kulcha on the Flag!
By Akshay Chavan
Catch the story of how the humble kulcha became a royal symbol!
Support
Support
Each day, Live History India brings you stories and films that not only chronicle India’s history and heritage for you, but also help create a digital archive of the 'Stories that make India' for future generations.