When the going gets tough, people often turn to an all-powerful, supreme being for guidance and help. Not the Tai-Ahom people. This community in Assam, whose roots go all the way back to the 13th century, dial in the dead.

The practice of ancestor worship, which is followed by peoples all across the world, is embodied in the Me-Dam-Me-Phi festival observed by the Tai-Ahoms in Assam on 31st January every year. What makes this festival so fascinating is that it is a thread that connects India with the ancient pre-Buddhist religious traditions of South East Asia, a historic connection that we know so little about.

The mighty Ahoms ruled Assam for nearly 600 years (1228-1838) and left a rich and vibrant heritage. The story of Me-Dam-Me-Phi is intimately connected with the arrival of the Tai people in Assam and the founding of the Ahom kingdom that would rule the region till the advent of the British.

Kareng Ghar in Sivasagar, built by the Ahom rulers|Wikimedia Commons

Assamese historian, H K Barpujari, in his book The Comprehensive History of Assam (Vol II) [1985], says the Ahoms were an offshoot of the Tai people, the most widespread demographic in South East Asia even today. ‘Tai’ or ‘Dai’ are people who speak the ‘Tai’ languages. Scattered across different regions, they are variously called ‘Thai’ in Thailand, ‘Shan’ in Myanmar (Burma), ‘Lao’ or ‘Chai’ in Laos, and ‘Dai’ and ‘Zhuang’ in China.

It is difficult to determine from which branch of the Tai people the Ahoms are descended. There is no mention of this even in the Deo Buranjis, the Ahom chronicles maintained by priests. One set of Assamese historians believes that the Ahoms migrated from a place called Keing Sen Mao-Lung, the capital of the Mong Mao-Lung region in present-day Upper Myanmar, while another set of historians believes that Mong Mao-Lung was located in the Yunnan province in China. The debate over whether the Ahoms came from Myanmar or China continues to this day.

It is believed that Ahom rule in Assam began when a Tai Prince named Sukapha along with 9,000 followers swept into the Brahmaputra Valley in 1228 CE. According to Ahom folklore, Sukapha was a descendant of the Tai God Khunlung and a Prince of the kingdom of Mong Mao-Lung (now on the Myanmar-China border), which was ruled by his brother.

Following a disagreement with his brother over succession, Sukapha left his native land in 1215 CE in search of new territories. He is said to have followed the ancient route between China and Assam that passed through the Upper Irrawaddy river valley (in Myanmar) and the Patkai Hills (Purvanchal Hills on India’s North-Eastern border with Myanmar) and settled in Charaideo (a district near Sivasagar in Upper Assam today), 13 years later. Sukapha thus laid the foundation of the Tai-Ahom Kingdom.

The Tai people who settled here were henceforth called ‘Ahoms’, a word derived from ‘asama’, or ‘invincible’ in local language. Interestingly, even the name of the region ‘Assam’ has same origins. The reason Ahoms became so powerful, was the fact that they introduced ‘Wet Rice’ cultivation and the plough technology to a region that used predominantly ‘slash & burn’ kind of cultivation. This allowed them to build large surplus of food, leading to establishment of a predominantly sophisticated society in a predominantly tribal region. Infact, Tai-Ahom legends mention about how Ahoms were ‘sent down from heavens’ so that ‘large fields lying fallow’ could be brought under the plough.

Naturally, the Ahoms brought with them their Tai religious beliefs, which were widespread in South East Asia before the advent of Buddhism. Called ‘Satsana Phi’ or ‘Ban Phi’ (‘religion of spirits’), this is a form of animism (a religious belief system that everything, including objects, places and living beings, has a spiritual essence) historically practiced by groups of ethnic Tai peoples.

Although the Tai-Ahoms believed in the existence of one ‘omnipotent being’ or ‘supreme being’ called ‘Pha Tu Ching Phrong Hum’, they also worshipped many other gods and goddesses or ‘Pha’, and spirits or ‘Phi’, and ancestors or ‘Phi Dam’ or ‘Phi Nam’. Through the centuries, the Tai-Ahoms were also greatly influenced by Hinduism and incorporated a number of elements of Hindu worship into their Tai traditions.

This was in keeping with a process scholars call ‘Ahomisation’, whereby the Tai-Ahoms had the unique ability to absorb the region’s numerous tribes and ethnic groups, and embrace their cultural and religious practices while never diluting their own beliefs.

These core beliefs were preserved by the priestly clans among the Ahoms – the Deodhais, Mohans and Bailungs – who recorded them in the Deo Buranjis. These chronicles refer to the Ahom custom of making offerings to ancestors as the Tai-Ahoms believed that their deceased ancestors were still with them in the form of spirits.

Women processing for the festival|Author

They believed that through remembrance and offerings, they could retain and renew the connection with their ancestors on occasions like Me-Dam-Me-Phi or Me-Nam-Me-Phi (worship of Dam and Phi). This literally translates as ‘Me – offering’, ‘Dam – ancestors’ and ‘Phi – gods’.

According to the Deo Buranjis, the Me-Dam-Me-Phi festival dates to the first Ahom ruler, Sukapha. He had performed this ritual to pay homage to his ancestors after successfully establishing the Ahom kingdom in the Brahmaputra Valley in 1228 CE. The festival survived because various Ahom kings over the centuries continued to observe this ritual on auspicious occasions.

Apart from the Deo Buranjis, there are other early references to the festival being observed by Ahom monarchs. For instance, Ahom King Suhungmung (r. 1497 – 1539) performed this ritual in 1535 CE after his victory over the Kachari Kingdom (in Eastern Assam). Similarly, King Susengpha (r. 1603-1641) performed the Me-Dam-Me-Phi ceremony in 1608 CE in his capital Garhgaon, seeking the protection and well-being of his kingdom and people. This ceremony was also invoked to awaken the spirits of ancestors during times of crisis. When in 1671 CE, Mughal forces invaded the Ahom Kingdom, King Supanmung (r. 1663-1670) is said to have sought the blessings of his ancestors by performing this ritual.

The festival ritual in process|Wikimedia Commons

During the reign of King Lakshmi Singha (r.1769-1780), a wooden beam of the palace suddenly collapsed, prompting the king to perform this ceremony to ward off evil. It is interesting to note that even after embracing Hinduism and adopting Hindu names in the late 17th century, the Ahom kings retained their age-old traditions and continued to observe Me-Dam-Me-Phi. During this period, it was an ‘elite’ ceremony performed only by the King to either avert imminent danger, commemorate a victory or seek longevity.

Ahom rule ended when Assam first fell to the Burmese in 1821-25 and was then annexed by the British following the Treaty of Yandaboo in 1826. With the Kings and the royal court gone, it was the Tai-Ahom priests who kept the tradition of ancestor worship alive. But, in time, common folk too began to observe the Me-Dam-Me-Phi festival and it became a community celebration. Since 1991, the ceremony has been observed on 31st January each year. Interestingly, it finds a parallel in ‘Phi Dam’, a ritual of annual offerings to ancestors observed by the Tai people of Thailand, Laos, Myanmar and China.

Although 31st January has been chosen as the day when the entire Ahom community celebrates the Me-Dam-Me-Phi festival, it was originally observed on the death of the last ancestor of a particular family. Nowadays, the ceremony is an intimate affair for most families, who perform it in their homes. The ritual is performed around a post placed in the centre of the offerings, called ‘Dam-khuta’. The offerings include homemade wine, rice and various preparations of fish and meat.

On this day, people take a ritual bath and wear ceremonial clothes and make a special arrangement of the offerings such as boiled rice, pork, vegetables, black lentils, fish, fowl, duck and hen eggs, betel nut and leaves, etc along with any other foods or treats that were special to their ancestors. The offerings are placed on a specially constructed, layered platform called ‘mehenga’, which is made of bamboo, banana stalk and banana leaves.

Water, rice beer and mats are also placed in front of the mehenga. Special prayers are chanted by the head of the family along with a priest called a ‘Mong-Luk’, and people share their memories of the departed souls.

The mehenga is decorated and a full-grown hen is offered; some may offer up to three. Usually, three main mehenga are constructed, sometimes even five, as the Ahoms believe that along with the spirits of their dead ancestors, even the gods descend to earth during the festival. The mehengas are offered to Ai-lung-Dden, Leng-Don, Khao-Kham, Jajhing-Pha and Lung-Kuri.

After the fall of the Ahom kingdom, a public ceremony used to be conducted at Charaideo in Upper Assam, the original capital of the Ahoms. It was meant to create a sense of community and bonding among the Tai-Ahoms. The festival was revived in 1991 and has emerged as the core of the community’s identity. Not surprisingly, much like the rest of India, Assamese political parties and political leaders too have begun sponsoring these rituals, for electoral gain. 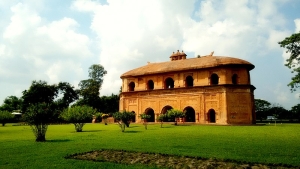 But the spiritual significance of Me-Dam-Me-Phi is as strong as ever. The ritual is an example of how ancient ethnic and religious bonds transcend national boundaries. It is a unique part of India’s shared heritage with South East Asia.