The Romance of Indian Muslin

One of the most often repeated stories about the British rule is about how, Dhaka’s muslin or ‘Dhake ka Malmal’ was so fine that an entire sari could pass through a ring, and how they cut the thumbs of the weavers to wipe out competition to their machine made cloth. Though this is just a tale, it reveals the allure of Bengal’s muslin.

‘A hundred yards of it can pass through the eye of the needle, so fine is its texture, and yet the point of the steel needle can’t pierce through it easily. It is so transparent and light that it looks as if one is in no dress at all but has only smeared the body with pure water.’

This is how the 14th-century Sufi poet and scholar Amir Khusrau described the almost invisible but highly valued cotton fabric, muslin, in his text Nihayatul-Kamaal (The Height of Wonders) in the 1320s.

Since ancient times, India has been known globally for its textiles, and muslin and calico were prized around the world. Calico, named after the little trading town of Calicut on the Malabar coast, was a coarser textile than muslin. While calico was made in southern India, muslin was largely produced in Odisha and Bengal, with the finest quality coming from Dhaka, the capital of present-day Bangladesh.

Earlier it was believed that the word ‘muslin’ was derived from the city of Mosul, now in Iraq, where Europeans first encountered the fabric, imported from India by Arab traders. But modern historians believe that it comes from the port of Machilipatnam, in Andhra Pradesh, which the Romans called as Maisolos, and of which muslin was the primary export.

Pandit Jawaharlal Nehru wrote about this fabric in his book Glimpses of World History, ‘Four thousand-year-old mummies of Egypt were wrapped in fine Indian muslin. The skill of Indian artisan was famous in the East as well as the West…’

We don’t know exactly when muslin production began in India but there are numerous textual references to textiles that closely resemble what we refer to as ‘muslin’ today. Megasthenes, the Greek historian and ambassador to the court of Chandragupta Maurya (reign c. 321 – 297 BCE), wrote of the Indians who wore ‘flowered garments made of the finest muslin and trinkets of gold on their fingers and in their ears.’

This transparent, clinging fabric, assumed to be muslin, is also depicted frequently in terracotta figurines of the 2nd century BCE found at Chandraketugarh, an archaeological site in modern-day West Bengal.

The fabric was also exported to the Roman Empire. The author of The Periplus of the Erythraean Sea, dated to the mid-1st century CE, writes about trade by Arab and Greek merchants between India and the Red Sea port of Aduli and beyond to Egypt and Ethiopia. He notes that cloth, including muslin, was exchanged for ivory, tortoise shell and rhinoceros horn.

The 7th century Sanskrit poet Banabhatta’s work, Harshacharita, a biography of Emperor Harshavardhana (590–647 CE), is one of the richest sources of information on ancient Indian textiles. In this text, Banabhatta, describes a garment worn by Goddess Lakshmi, white as foam, waving in the breeze, ornamented with various flowers and birds. In another place, he describes these transparent fabrics as having an appearance of a cast off skin of a serpent.

Muslin was also exported to Thailand and China. British historian John Guy says that at Pagan in Burma, mural paintings of the 11th to 14th centuries show princely figures dressed in ‘fine diaphanous white fabric [which] is presumably the much-prized Bengali muslin’.

British textile historian Sonia Ashmore, in her book Muslin mentions there were around 400 Turkish merchants based on the island of Diu, and equal number at Surat, exporting muslins to the Ottoman empire. This is corroborated by the Ottoman Customs regulations issued in 1546, at the port of Basra in Iraq, which mention the import of high-quality muslins.

It was a favoured cloth for the Ottoman turbans and in fact, the word ‘turban’ is derived from tülbent, the Turkish name for muslin.

Ashmore goes on to describe how an official inventory, made in 1640 CE, of all the goods available in an Istanbul market lists 20 types of muslin from India. She also mentions, how there was a growing concern in the Ottoman empire, about the ‘drain of wealth’ from Ottoman empire to India, due to heavy demand for Indian textiles and other goods.

In India, muslin reached its peak of glory, under the Mughals. The weavers received royal patronage and muslin became a favourite among the rulers and the nobility alike. It was referred to in poetic terms like abi-rawan (flowing water), baft-hawa (woven air) and shabnam (evening dew). It became one of the most lucrative exports with the best valued at 1600 silver pence - the longer the length and lighter the weight, the higher the price.

There is a wonderful description by French jeweller Jean Baptiste Travenier (1605-1689), of a present which the Persian Ambassador to Delhi, presented the Shah of Iran on his return. It was a gold coconut the size of an ostrich’s egg, studded with precious stones, and when it was opened, came out a whopping 60 meters of long fabric ‘so fine that you would scarcely know what it was that you held in your hand’.

With the advent of the Europeans, the muslin industry was further expanded. Earlier, they bought the fabric through Arab, Iranian and Armenian merchants, but now they had direct access to it with settlements in Bengal - Dutch in Chinsura, Portuguese and British in Hooghly and French in Chandernagore. By the late 17th century, merchants had brought muslin to America too.

Muslin changed the fashion tastes in the West with Queen Mary Antoinette and Empress Josephine, the first wife of Napoleon, popularizing it in France. In the Great Exhibition of London in 1851, muslin occupied a prominent place.

However, the muslin industry entered a dark period after the British established their rule over Bengal, following the Battle of Plassey in 1757. The high tariffs, brutal exploitation, and the horrific cycles of famines and floods, decimated the industry. The plant that produced the finest qualities of muslin cotton, locally called ‘phuti karpas’, grew by the banks of the Meghna river in Bangladesh and is believed to have become extinct 160 years ago. 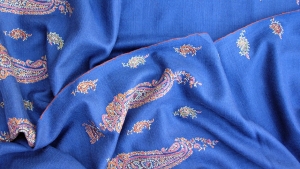 In the book Considerations on India Affairs (1772) written by the British merchant, William Bolts tells about how the ‘dalals’ forced the weavers to manufacture more profitable silk over cotton. Eventually, the conditions of these silk weavers were so horrific that the weavers cut their own thumbs than endure the slavery-like conditions in these factories.

Over time, cheaper substitutes and other weaves became popular across the world and the demand for Indian muslin plummeted. But there is some hope. The Crafts Council of Kolkata, under the leadership of Ruby Pal Choudhuri, has spent decades working to revive the fabric and is focusing on muslin of 500-600 thread count. Indian muslin will probably never return to its glory days but it is initiatives like this that will prevent this magical Indian fabric from slipping into oblivion.