A couple of years ago, Indian scientists discovered a few crystals of zircon barely the width of a human hair trapped in rocks recovered from Odisha. This was a terribly exciting discovery, for at 4.2 billion years, they were the second-oldest zircons ever found on the planet, providing a snapshot into the earth’s formation. The oldest zircons found to date were unearthed in Western Australia and go back 4.4 billion years.

The Odisha discovery was made in 2018 and it, once again, drew global attention to just how old the Indian landmass is. Millions of years ago, India was, in fact, part of a supercontinent called Gondwana, a landmass that comprised the present-day continents of Africa, South America, Australia, Antarctica, the Indian subcontinent, and Madagascar.

Named after the ‘Gondwana’ region in Central India, this supercontinent began to split up 160-180 million years ago, in a process that took millions of years. After breaking away from the rest of Gondwana, India and Madagascar began to move northwards, with the two separating from each other around 80-90 million years ago. This marked the beginning of one of the longest journeys undertaken by any landmass on the planet.

The Indian plate continued to move northward, and about 50 million years ago, it finally ‘crashed’ into the Eurasian plate, giving birth to new formations, while the old structures such as rocks remained.

Many of the natural wonders we see in India today are an outcome of millions of years of geographical transformation. Some of them date to the formative stages of the earth itself. Let us walk you through some of these geological treasures.

The Bedrock of India

When the Gondwana supercontinent began splitting up, Madagascar and India remained attached to each other for much longer, as a part of what is known as the Dharwar Craton. This ‘craton’ is the earliest building block of the Indian landmass and it has been around for 3.5 billion years. A craton is an old, stable part of the Earth’s outer layer, or the crust, that has not changed or deformed for billions of years.

Did you know that the popular Nandi Hills, about 40 km from the Bengaluru International Airport, is a part of the Dharwar Craton? Geologists believe that the Dharwar rocks underlie much of peninsular India, thus forming the pedestal on which a large part of India sits today.

Find out more about this exciting part of the Indian subcontinent’s birth and development.

Mount Kailash & The Creation of Rivers

About 50 million years ago, the Indian plate collided with the Eurasian plate (the largest continental area on Earth) and this gave rise to the mighty Himalayas.

But the Himalayas were not created in one single geological event; they are the result of three major tectonic upheavals. This great mountain range is today associated with Indian rivers like the Ganga and the Brahmaputra in India. But did you know that before these rivers arose, there was just one ‘super’ river that flowed across a vast swathe of land in the North of the Indian subcontinent? It was known as the ‘Indo-Brahma’ or the ‘Siwalik River’. As the Himalayas gradually rose, this ‘super river’ broke up into the major rivers we know today – the Indus, the Ganga and the Brahmaputra.

Read about the rise of the Himalayas and how their evolution and growth reshaped one mighty river, and how the famous Mount Kailash played a role in these geological events.

The Narmada River is among India’s holiest rivers, a site of faith and devotion. But before it caresses the banks of the holy towns that dot its course, the river twists and turns and leaps with wild abandon as it rushes from its source in the Amarkantak Plateau in Madhya Pradesh.

At Bhedaghat near Jabalpur, the Narmada enters the plains from mountainous terrain in the most dramatic way. In doing so, it has shaped two remarkable natural formations – the Dhuandhar Waterfalls and the Marble Rocks. Marked by intense water pressure and a narrow gorge, this part of the Narmada is a sight to behold.

Explore the marble wonders of the Narmada.

About an hour’s drive from Hyderabad is a massive rock that suddenly rises from gentle farmlands, a remnant of an ancient geological epoch. Called Bhongir and located along the Hyderabad-Warangal highway in Telangana, it is spread across 72 km and rises 500 feet above the ground. Around 2.5 billion years old, Bhongir is a batholith or an intrusive igneous rock that formed from cooled magma deep in the earth's crust, running kilometres deep.

Visitors flock to Bhongir for two reasons – one, to visit this magnificent geological oddity and two, to visit a manmade wonder perched atop the natural one. This is one of the earliest forts in the Deccan, the foundations of which were laid by Western Chalukya ruler Tribhuvanamalla Vikramaditya VI in the late 11th or early 12th century CE.

Here’s the story of a geological and a historic marvel.

The Meghalayan Age of Geology

The picturesque North-Eastern state of Meghalaya is a geologist’s paradise and this tiny state holds some really big secrets. Meghalaya is home to about 1,700 limestone and sandstone caves stretching across 491 km! The state also has the longest sandstone cave in the world – the Krem Puri cave, located in Mawsynram (the ‘wettest place on Earth’), covers a length of 24.5 km.

Another fact that will knock you off your feet is that the region was actually an island 3.5 billion years ago. And that’s not all. Did you know that the geological timescale that we are currently living in is officially called the ‘Meghalayan Age’? Or that among the treasures found here are shark teeth and dinosaur fossils?

There’s just so much Meghalaya has to offer. Discover all its geological secrets here. 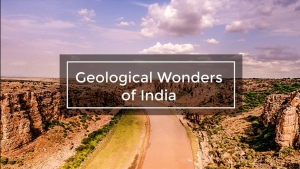 Geological Wonders of India
geological wonder Gondwana geology Narmada geology of india mount kailash
You May Also Like
Snapshort Histories
Double-Deckers: Twice the Joy
By Kurush Dalal
The much-loved double-decker bus has been a Mumbai icon for more than 80 years. Hop on for a ride down memory lane
History Daily
Nicholas Roerich: India’s Russian Navratna
By Anshika Jain
The Russian-born painter, explorer, philosopher, mystic and ‘jewel of India’, who came here in search of utopia
Cover Story
Nanda Devi’s Nuclear Secret and a Botched CIA Operation
By Ranvijay Singh Hada
Fifty-five years ago, the CIA lost a nuclear-powered spy device on India’s second-highest peak, Nanda Devi
Snapshort Histories
Baobab Tree: A Friend of Archaeologists
By Kurush Dalal
Cursed by the devil but revered by humans, the baobab is called the ‘tree of life’ for the natural bounty it offers
Support
Support
Each day, Live History India brings you stories and films that not only chronicle India’s history and heritage for you, but also help create a digital archive of the 'Stories that make India' for future generations.