Around 485 BCE, as Gautama Buddha lay dying, he had only his first and most faithful disciple, Ananda, by his side. He had eaten a hearty meal cooked by a blacksmith called Chunda and it had disagreed with him seriously. He was 80 years old and knew the end was near.

He told Ananda there were two important things he wanted to say. The first was that Chunda was to be exonerated and was to bear no blame at all for his passing. This was the Buddha’s karma, and Chunda had in fact gained great karma by feeding the Buddha his last meal on earth.

The second was that there should be only four places where he was to be remembered by his disciples: Lumbini, where he was born in 571 BCE; Bodh Gaya, where he attained enlightenment; Sarnath, where he preached his first sermon; and Kushinagar, where he breathed his last.

The Buddha's final words to Ananda were: “Everything decays; strive for your goal with diligence.”

The Parinirvana Temple at Kushinagara|Wikimedia Commons

Kushinagar sits in the modern-day district of the same name in the extreme north-east of Uttar Pradesh, less than 150 km from Lumbini, now in Nepal. At the time of the Buddha’s death, Kushinagar was called Kushavati and was the capital of the tribal kingdom of the Mallas. It was also one of the capitals of the ancient kingdom of Kosala, which also finds reference in epic literature. The name Kushavati supposedly comes from the abundant growth of kusha grass here, a grass that the Buddha favoured when making his meditation seats and is therefore still revered by Buddhists today.

Tucked away in the foothills of the Himalayas, Malla was one of the smallest of the 16 Mahajanapadas. Both Jainism and Buddhism flourished here. The largest of the Mahajanapadas was Magadha and, like so many others, the Malla Janapada was eventually absorbed by it at the end of the 5th century BCE.

Siddhartha Gautama, the Buddha, was born a prince of the Sakya tribe. His father had ruled from Kapilavastu. He forsook family, throne and riches in pursuit of a deeper understanding of life, and a path to end suffering.

Having achieved enlightenment, he preached a religion of equality, duty, compassion and peace. This faith that he founded would forever alter the Indian subcontinent and spread far beyond it, from Assam to Afghanistan and Kashmir to Sri Lanka, but also to China, Korea and Japan, Central Asia and Mongolia. It would then see a major revival in the West in the 19th century, and today Buddhist pilgrims from around the world come to India and Nepal to visit the sites that the Buddha designated.

In the Buddhist tradition, the Buddha did not die but achieved mahaparinirvana or the ultimate state of nirvana. The Buddhist scriptures say the Buddha lay down on his right side, placed his right hand under his head, and passed silently from this world. These details were preserved in the Mahaparinirvana Sutta of the Digha Nikaya, which is part of the Sutta Pitaka, one of the Three Baskets of the Theravada Buddhist faith.

Oskar von Hinüber, a Buddhist scholar, Pali expert and Indologist, says the text of the Pali version of the work has such archaic syntax and ancient place names that it cannot have been written later than 350-320 BCE, thus making it a “true historical memory”.

Upon the death of the Buddha, the Mallas waited for Mahakassapa, one of the Buddha’s oldest disciples, to arrive before cremating his earthly remains. Many people came to pay their respects. After the cremation, the Mallas tried to keep all the relics of the Buddha but by then the seven clans had arrived and there was a war-like situation as each of them claimed the Buddha’s relics.

The relics were finally divided into ten portions by a Brahmin named Drona – eight consisted of the bones, one was the ashes and the last was the potsherd used to make the portions. The relics were then enshrined in stupas built by the Sakyas of Kapilavastu (the Buddha’s birth clan), the Brahmin Drona, the Mallas of Kushinagar and neighbouring kings – Ajatasattu of Magadha; the Licchavis of Vaishali; the Bulis of Allakappa; the Koliyas of Ramagrama; and the Mallas of Pava, amongst others. Some sources say eight parts others say ten.

Conjectural reconstruction of the main gate of Kusinagara circa 500 BCE adapted from the Torana at Sanchi (by Percy Brown, 1955)|Wikimedia Commons

The site of Kushinagar was slowly lost to memory with the decline of Buddhism in the 12th century CE. Today, a massive brick stupa stands at the spot where the Buddha was cremated, and adjacent to it are the remains of the Parinirvana Temple (built several centuries later and since reconstructed). Within the temple is a 6.1-metre-long brick statue of a reclining Buddha. The site is covered in many smaller, votive stupas too.

The site of Kushavati/Kushinagar was first positively identified by Sir Alexander Cunningham, the first Director-General of the Archaeological Survey of India (ASI), during his surveys of Uttar Pradesh. The statue, identified by Cunningham, had already been written of in 637 CE by the Chinese Buddhist monk Hiuen Tsang and it was in retracing his footsteps that Cunningham got to Kushinagar. Cunningham excavated here in 1877, and conserved both the stupa and the temple.

Buddhism, with its message of peace, was a very strong influence on modern India’s politicians, including the first Prime Minister of India, Jawaharlal Nehru; this was reflected also in his writings. In the first decade after Independence, India projected a vision of itself as being guided by universal ethics rooted in the nation’s ancient Buddhist past.

Buddhist relics were sent out on tours to distant lands and Buddhist symbols were incorporated into a wide variety of government-sponsored programmes, right from the start the spoked chakra of the Buddha was incorporated in the Indian flag. Buddhist principles became part of the push for pan-Asian unity. Many of the relics discovered by Cunningham and others were actually shared with South Asian and Southeast Asian nations.

Political analyst Douglas F Ober, writing in the Cambridge journal Modern Asian Studies, said: “This more than decades-long effort was entirely the outcome of the political and social visions of India's first prime minister Jawaharlal Nehru and key members of his cabinet. In its most concise formulation, this Nehruvian-style Buddhism consisted of a two-pronged approach, one concerning the uses of Buddhism in the domestic sphere—that is, for domestic consumption by citizens of the new nation—and one concerning the uses of Buddhism as an instrument of foreign policy. At the heart of these projects was the dual effort to integrate a diverse South Asian populace into a wider national consciousness and yield influence among the post-colonial order in Asia.”

This effort culminated in a pan-Asian celebration of the 2500th anniversary of the passing away of the Buddha, in May 1956, conceived of and executed by India. As part of this effort, India under Nehru went all-out to spruce up Buddhist monuments and bring them at par with heritage monuments as seen in the Western world. The Kushinagar we see today was part of this effort. The Parinirvana Temple too was reconstructed at this time.

The stupa erected at Kushinagar by the Mallas was opened by the Mauryan Emperor Ashoka (r. 269 BCE - 232 BCE) after his visit in 260 BCE, when he reopened all the original stupas (save one the Ramagrama Stupa) and redistributed the relics across 84,000 stupas, according to Buddhist scripture. The site would remain a very important one for centuries and saw expansions under the later Kushanas (60 - 230 CE) and Guptas (4th to late 6th century CE). The Parinirvana Temple was built in the Gupta Era.

One of the most striking Mahaparinirvana images of the Buddha is seen on the left side (as you enter) of the Chaitya Cave No 21 at Ajanta in Aurangabad district, in Maharashtra. There are many depictions of the Mahaparinirvana, all showing the Buddha in the same position, lying on his side. They date from the era of Gandharan art (1st century BCE to 1st century CE), all the way to that of Pala art (10th century CE). The Theravada versions do not depict the Buddha in his anthropomorphic form; they can be seen at Sanchi and Bahrut, both in Madhya Pradesh.

The Mahaparinirvana of the Buddha as depicted at Sanchi|Wikimedia Commons

Today, tens of thousands from around the world visit the site of Kushinagar, a well-laid-out pilgrimage centre with beautiful lawns and gardens. Little is known of what became of Chunda, but as the Buddha had wished, Kushinagar is to the Buddhist world one of the planet’s holiest spots. 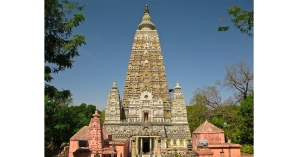 Uttar Pradesh Buddhism Buddha history of india Kushinagar Parinirvana Buddha's relics
You May Also Like
History Daily
Moamoria Rebellion: The Revolution that History Forgot
By Mahasweta Dey
A 30 year civil war, a kind of ‘people’s revolution’, that hollowed out the Ahom kingdom from within
Amazing India
Finding the Indus Valley Civilization
By Anshika Jain
Catch the riveting story of the most significant archaeological finds of the 20th century
History Daily
Anjediva Island: Goa’s Unknown Treasure
By Yash Mishra
Discover the tiny island of Anjediva in Goa that has remained important for the last 2,000 years.
Living History
Emperor Jahangir: The Naturalist
By Anshika Jain
Read all about the wild obsession of a quirky Emperor, with his pets and other animals
Support
Support
Each day, Live History India brings you stories and films that not only chronicle India’s history and heritage for you, but also help create a digital archive of the 'Stories that make India' for future generations.