Two thousand years ago, when tourists and day-trippers were not thronging the beaches near Puducherry, these sandy stretches were buzzing with activity of a different kind. They were welcoming seafarers from faraway Europe, who came in merchant vessels laden with all manner of goods and departed with an equally precious cargo.

In these parts, ships would dock at Arikamedu on the banks of the Ariyankuppam River near modern-day Puducherry on the east coast in South India. Arikamedu was an Indo-Roman trading city and the earliest-known Indo-Pacific bead-making site. What makes it especially significant is its cultural continuity, all the way from the 1st Century BCE to the 18th Century CE. Today, Arikamedu is considered to be one of the most crucial Early Historical archaeological sites in South India.

India’s trade ties with Rome began during the reign of Augustus Caesar, the first Roman Emperor, at the beginning of the Common Era. These links extended to ports along the east and west coasts of India, such as the ports of Barigaza (Bharuch in Gujarat), Muziris (Pattanam in Kerala) and Arikamedu.

The word ‘Arikamedu’ is believed to be derived from the Tamil word ‘arrukumedu’ or ‘mound of ruins’, or ‘arukumedu’, meaning ‘mound on a riverbank’.

Another account suggests that it could be the ‘mound of Arukan’ (Tamil word for Jaina god) because a statuette of a Mahavira avatar was found here. The city is also linked with the name ‘Virayipattinam’ or ‘Virampatnam’ – the port of Virai, named after Virai village situated nearby.

Interestingly, Arikamedu-Virampatnam finds mention in the Graeco-Roman text of the 1st century CE, Periplus of the Erythraean Sea, a log of coastal landmarks and ports. It refers to this site as ‘Poduke’, a port identified with Arikamedu, owing to its location. Greek geographer Ptolemy’s Geographia of the 2nd Century CE, mentions ‘Poduke Emporion’, also believed to be Arikamedu.

But it wasn’t until 1765 that this port of antiquity received some attention. French astronomer Guillaume Le Gentil visited Pondicherry to observe Venus’s transit and he talks about Virampatnam in his records. He noted that the villagers were removing large, ancient bricks from the riverside. He also recorded vestiges of wells exposed along the high river bank, which, according to him, were made from a series of earthenware vessels placed above each other. The reference is, no doubt, to terracotta ring wells, a large number of which were found during later excavations.

Then, in the 1930s, an archaeologist and numismatist from France set the ball rolling for the city’s historical revelation. Jouveau-Dubreuil, while collecting antiquities from Arikamedu, found an intaglio, engraved with the portrait of a man. He identified the man as Roman Emperor Augustus. Excited at what he had found, Jouveau-Dubreuil wrote to the then Governor of Pondicherry, claiming the existence of a Roman city!

With the site now in the spotlight, excavations were carried out in the early 1940s, and the artifacts unearthed were sent to several museums in India. When British Archaeologist Mortimer Wheeler found fragments of Roman amphorae, lamps and red-glazed pottery at the museum in Pondicherry, he realized these were pieces of famous pottery from the Roman city of Arezzo in Tuscany. Further excavations were carried out at Arikamedu in 1945, with Wheeler making significant contributions to establishing the presence of this port city.

The pottery he found was categorized into three groups- (i) Arretine ware (ii) amphorae and (iii) rouletted black ware, which, whether or not imported, showed foreign influences. Also found at Arikamedu were large quantities of finished and unfinished shells, beads and pottery, which clearly indicated the existence of indigenous craft traditions before the arrival of the Romans.

Roman sherds that were occasionally found at Arikamedu were identified as Terra Sigillata or ‘Arretine ware’ – the most precisely datable of all imports found at Arikamedu, noted Wheeler. The Sigillata period is generally considered to extend from the mid-1st century BCE to the mid-1st century CE. The rouletted ware, with the characteristic engraved rim on a grey/black surface, was widespread and marked the Roman trade in South India in the 1st and 2nd centuries CE.

This phase also marked the beginning of construction activities. Harbours built with wood, warehouses, storage houses, and several other related structures were built at the site during this period. Evidence of bead manufacturing in Southern India too appeared during this phase.

In his report on his Arikamedu excavations, Wheeler mentions that the lowest of the deposits (which contained very little) yielded sherds of Mediterranean amphora. It was therefore affirmed that a reasonably regular trade with the West was maintained from the beginning of the occupation here. From the available evidence, it was inferred that the earliest phase at the site could be dated to the 1st century BCE, thanks to the amphorae.

Arikamedu was a manufacturing centre of textiles, especially muslin, jewellery, pottery and of course beads, for which it was known all around the globe. Beads were made from semi-precious stones, glass and sometimes even gold.  Two gemstones, carved with intaglio designs by Graeco-Roman gem-cutters, and in one instance untrimmed, suggest the presence of Western craftsmen in this city.

As structures such as warehouses, ring wells and tanks surfaced during excavations, the layout of the city became clear. Other discoveries such as Arretine ware (Italian redware) and Mediterranean remains such as amphora fragments, beads and metallic objects confirmed that Arikamedu had maintained trade relations with Rome from the 1st century BCE to beyond 2nd Century CE.

For an even clearer understanding of this port city, French archaeologists and Wheeler studied the site in two parts – north and south. It was believed that the north had been settled by the Yavanas or people of Gaeco-Roman origin, and the south by the natives. Wheeler stated that while the northern part of the city, which is closer to the ocean, was more harbour-oriented, the southern part was an industrial town. The ceramics obtained from the north differed from those in the south, indicating that the inhabitants of the two sections were also different.

Brick structures in the north were identified as warehouses by Wheeler. The early port facilities were probably made of timber, as cut timber and rope fragments were also found. Large tank-like enclosures with brick structures, which were observed in the southern sector, were understood to be ‘textile-dyeing’ tanks. Textiles formed an important commodity exported from Arikamedu.

Decorated pottery fragments from the southern sector of the site|http://bit.ly/2UTHg9H

In another round of excavations led by French archaeologist Jean-Marie Casal between 1947 and 1950, he suggested that the earliest settlement at the site was at the southern sector, pre-dating the trade activities. A pottery assemblage was found which he identified to the late Iron Age pottery of South India, on the basis of which he termed the settlement as belonging to the “Megalithic” period of around the late 3rd Century or early 2nd Century BCE.

After a comprehensive study of the archaeological work done at Arikamedu, archaeologist Vimala Begley initiated fresh excavations in the early 1990s. Her work revealed many new types of artifacts and structures, and she confirmed that Arikamedu was occupied well beyond the 2nd Century CE. After collating the data from Wheeler's and Casal's excavations, she proposed a revised chronological sequence of the different phases in the ancient settlement.

Though the trade activities might have diminished around the 2nd Century CE, the settlement did continue and new buildings were constructed between the 3rd and 6th Century CE. Bead- making continued to be an important industry.

According to Begley, there is enough evidence to suggest that Arikamedu was occupied during the early medieval times. Chola coins from the 11th Century CE, celadon (jade green coloured) pottery, and other East Asian glazed ceramics suggested that the site was occupied then and was involved in medieval East-West maritime trade as well.

More concrete evidence for the occupation of the site between the 10th-11th and 14th-15th Centuries CE included beads, buildings and roof tiles. During this period, Arikamedu was a part of the vast empire of the Imperial Cholas. From the Cholas, the territory could have been passed on to the Vijayanagar Empire that emerged as a major power in South India from 1336 to 1565 CE. Chola coins including those issued by Raja Raja I, were frequently found at Arikamedu.

There is no evidence for the period between 1500 and 1700 CE, which suggests that Arikamedu had been abandoned during this time. But, after the French came to India, towards the end of the 18th century, the site was briefly occupied once again. Around 1771-73, a seminary and residence were built for the Jesuit missionaries here since this area was under French control.

Remains at the site of Arikamedu|Wikimedia Commons

The structure was built mainly with new bricks, but some of the old, large bricks too were used. The seminary, known as Mission House, was abandoned in 1783. It is the ruins of this seminary that survive to this date. If you visit Arikamedu, you will be welcomed by two entrance pillars, a small brick structure and a few arches.

Today there is little to show of Arikamedu’s old Indo-Roman past but the bits and pieces scattered among local museums piece together an intriguing story of those glorious maritime days. 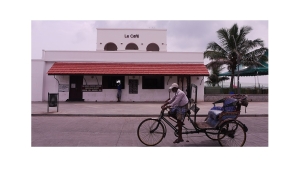 trade archaeology Arikamedu indo-roman ancient port
You May Also Like
History Daily
Moamoria Rebellion: The Revolution that History Forgot
By Mahasweta Dey
A 30 year civil war, a kind of ‘people’s revolution’, that hollowed out the Ahom kingdom from within
Amazing India
Finding the Indus Valley Civilization
By Anshika Jain
Catch the riveting story of the most significant archaeological finds of the 20th century
History Daily
Anjediva Island: Goa’s Unknown Treasure
By Yash Mishra
Discover the tiny island of Anjediva in Goa that has remained important for the last 2,000 years.
Living History
Emperor Jahangir: The Naturalist
By Anshika Jain
Read all about the wild obsession of a quirky Emperor, with his pets and other animals
Support
Support
Each day, Live History India brings you stories and films that not only chronicle India’s history and heritage for you, but also help create a digital archive of the 'Stories that make India' for future generations.