For Hindus, Mathura is almost synonymous with Lord Krishna. It is also described as one of the seven holy cities of India in the Garuda Purana. Curiously, despite its strong connection with the Hindu faith, Mathura, on the banks of the Yamuna River, was once also a major centre of Jainism.

Since the 4th or 3rd century BCE, Mathura, which was the capital of the Surasena Mahajanapada, has been a centre of culture and trade owing to its location. It sat plum at the junction of caravan routes that fanned out to the west, east and south of India. This made it a cosmopolitan city exposed to a variety of influences. Since it thrived on trade, not agriculture, Mathura attracted businessmen and merchants, most of whom were from the Jain community and who had moved here from the Ganga basin in Eastern India.

What we know of Mathura’s connection to Jainism comes from the site of Kankali Tila, also known as the Jaini mound. It derives its name from a small, modern temple dedicated to Hindu Goddess Kankali Devi, a form of Durga, situated nearby.

Not many have heard of this important archaeological site, which was repeatedly excavated between 1870 and 1896. The discoveries made and artefacts unearthed during these excavations, by men like Alexander Cunningham, Alois Anton Fuhrer and James Burgess, opened the doors to writing the history of Jainism in Mathura on scientific lines, which until then was vague and based only on hearsay. The oldest inscription, dated to the 2nd century BCE, and the most recent to the 11th century CE, suggest that there was continuous Jain occupation in Mathura for at least 1,200 years.

Cunningham, the first Director-General of the Archaeological Survey of India (ASI), first excavated the western end of Kankali Tila in 1871, bringing to light the remains of a number of artefacts like sculptures, pillars, ayaga-pattas (tablets of homage), railings, gateways, etc. Most of these belonged to the Kushan era.

In India, the Kushan Empire peaked between 30 CE and 375 CE, and Mathura rose to prominence under this dynasty as it was their southern capital. Many of the inscriptions unearthed bore the names of their donors, which was proof of a business community that had money. The donors are mentioned as the daughter-in-law of the iron monger, the perfumer, the wife of a dyer, son of a vatsi, the courtesan, etc.

However, it was the excavation season between 1888 and 1891 in Mathura, led by German Indologist Alois Anton Fuhrer that was groundbreaking. He found evidence of a Jain stupa at Kankali Tila! This was the only site that proved that Jains too built stupas, something that we knew of only through literature till then. The archaeologists also found the ruins of two Jain temples, one belonging to the Svetambar sect and the other to the Digambar sect.

The building of the stupa has a legend associated with it, as mentioned by Jinaprabha Suri in his 14th-century text Vividha Tirtha Kalpa. He says, “Two monks came to Mathura and lodging in a garden converted its mistress, a goddess, so that she became a Jain laywoman. The goddess, to compensate for her failure to the Jain community of Mathura to Mount Meru to pay homage to the stupa there, constructed a replica of it made out of gold and jewels. Thus, the stupa is also called ‘Devanirmit stupa’.”

Devotees also believe that this stupa was constructed in honour of Parshvanath, the twenty-third tirthankara.

Piece of the Jain stupa railing showing a torana|Wikimedia Commons

The same text, Vividha Tirtha Kalpa, also mentions that Lord Kubera had instructed the Jains of Mathura to worship the jina in their homes. That’s how the practice of placing an image of the jina above the main door was initiated in this city. Another literary mention of Mathura is in the 10th-century text, Yasastilakacampu written by South Indian Jain monk Somadev Suri. He mentions Urvila, a queen of Mathura, who used to send a rath yatra of the jina on the occasion of Astahika Mahotsav.

Mathura is also the birthplace of Naminath, the 21st tirthankara, while Mahavira, the last and 24th tirthankara, is believed to have visited the region.

Another important find at Kankali Tila was a sculpture of Goddess Saraswati dated to 132 CE. It was donated by a Jain metal worker and is the oldest sculpture of the Goddess of Learning found in India. It is headless, with the left hand holding a book and the right hand a mala or garland.

Besides the nearly 800 Jain artefacts found here, the site of Kankali Tila also yielded remnants of Buddhist sculptures, pointing to the fact that besides Hinduism and Jainism, Mathura was also a centre of Buddhism. Interestingly, perhaps due to its connection with Jainism, Buddha made some somewhat uncharitable comments about Mathura, as mentioned in the Buddhist text, Anguttara Nikaya. He said, “this city had too much dust, uneven ground, too many dogs, evil spirits, and was short of alms”.

A great misfortune struck Mathura in the first quarter of the 11th century, when the ruthless conqueror, Mahmud of Ghazni, invaded the city in 1018 CE. He plundered, burnt and destroyed it. Later, between 1489 and 1517, the region was sacked by Sultan Sikandar Lodi and it took Mathura centuries to recover from this annihilation. 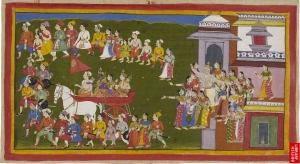 It was only in the 19th century that Jainism once again gained some prominence in Mathura due to Seth Raghunath Das, son of the famous Mathura banker, Seth Lakshmi Chand, who funded the construction of temples there. Even though the Jain community in Mathura is very small today, with about 10 temples in the city, their religious zeal has made Jainism a living and vibrant religion in this holy land.

Saraswati archaeology Mathura Buddhism Jainism
You May Also Like
Snapshort Histories
Double-Deckers: Twice the Joy
By Kurush Dalal
The much-loved double-decker bus has been a Mumbai icon for more than 80 years. Hop on for a ride down memory lane
History Daily
Nicholas Roerich: India’s Russian Navratna
By Anshika Jain
The Russian-born painter, explorer, philosopher, mystic and ‘jewel of India’, who came here in search of utopia
Cover Story
Nanda Devi’s Nuclear Secret and a Botched CIA Operation
By Ranvijay Singh Hada
Fifty-five years ago, the CIA lost a nuclear-powered spy device on India’s second-highest peak, Nanda Devi
Snapshort Histories
Baobab Tree: A Friend of Archaeologists
By Kurush Dalal
Cursed by the devil but revered by humans, the baobab is called the ‘tree of life’ for the natural bounty it offers
Support
Support
Each day, Live History India brings you stories and films that not only chronicle India’s history and heritage for you, but also help create a digital archive of the 'Stories that make India' for future generations.