“With a view to cause satisfaction to the world, you indulge in your dance, thereby creating happiness at a time when it withers, being stricken or afflicted by the scorching sun. So, I approach you, who are the descendant of that race of Indra who are the only solace to those opposed by grief, in the same manner as the sun is approached as a friend of the lotus.”

These lines are addressed to a messenger peacock by an aching lover who is separated from his spouse, in the 16th-century poetic work called Mayurasandesa (The Peacock’s Message) by Udaya, a poet from Kerala.

It is not surprising that the lover in the above-mentioned work expressed his anguish through the peacock. The bird has always been an object of wonder and inspiration, and has been mentioned in accounts dating back more than 2,000 years. It adorns the crown of Lord Krishna, the most loved god of the Hindu pantheon, who has been an inspiration to artists across the subcontinent, Its beautiful train and hypnotic mating dance have captured the imagination of foreign visitors in ancient times; it became the symbol of many an Indian royal; and it was eventually adopted as the national bird of India.

For centuries, the peacock has played a pivotal role in Indian tradition. It has been revered in ancient texts and gracefully depicted in art through the ages. While the peacock is indigenous to India, there are various references to it being introduced to the West through this country. The Old Testament of the Bible (arguably) says that King Solomon (of Israel), who reigned around 950 BCE, received an import of peacocks from Muziris, an ancient port in Kerala. Even the Hebrew word for peacock, ‘tavas’, is believed to be derived from the Tamil word ‘togai’.

When Macedonian Emperor Alexander invaded India in 326 BCE, he was transfixed by a flock of wild peacocks in flight on the banks of the Ravi River. He was so enchanted by their beauty that he warned his army that anyone who harmed these birds would be punished. According to some accounts, Alexander took 200 peacocks with him when he left India and they became an item of wonder in foreign lands. Apparently, people would pay hefty sums just to come and see them.

In India, peacocks has been sacred to many dynasties. The great ‘Mauryan’ dynasty, founded by Chandragupta Maurya in 322 BCE, is named after the peacock. The bird finds prominent mention in the rock edicts of his grandson, the third Mauryan Emperor Ashoka. The seal of the 2nd century Kushan emperor Kanishka was a peacock, while the Gupta rulers, who presided over the ‘classical age in Indian history’, issued gold and silver coins depicting this glamorous bird.

Also, the 2,000-year-old neighbourhood of Mylapore in Chennai derives its name from Mayilarparikumoor, meaning ‘land of the peacock scream’. Pallava ruler Nandivarman III (c. 850 CE) was known as ‘Mylai Kavalan’ or the ‘Protector of the City of Peacocks’. In medieval times, the Tughlaq rulers (1320-1414 CE) adopted the peacock’s feather as their state symbol and incorporated it into the headgear of their soldiers.

Indian mythology is full of legends associated with the peacock. The most popular is around how it became so closely connected with Lord Krishna. The story goes that in Govardhana Hill at Braj, once when Lord Krishna was playing his flute, peacocks started dancing in joy and excitement upon listening to the sweet melody. After the dance, they spread their feathers on the ground and the chief peacock offered them to Lord Krishna with humility. The Lord accepted the gift and promised to always adorn himself with it.

Another story explains how the peacock got its beautiful plumage. It seems that when Lord Indra was battling Ravana, the rakshasa king of Lanka, a peacock raised its tail to form a protective screen behind which Indra could hide. As a reward, Indra granted the bird its gorgeous blue-green plumage and exotic feathered tail.

The peacock also features in the popular episode of samudra-manthan in Hindu mythology, which explains the origins of amrita, the nectar of immortality. It is said that when poison was churned, the peacock absorbed its toxic effects, thus acting as a protector.

The vahana of Lord Kartikeya is also a peacock named Paravani. And it is impossible to imagine Lord Krishna without a peacock feather attached to his headband.

Valmiki in his Ramayana wrote that while in exile for 14 years, Ram and Sita always watched the peacock’s graceful dances together. Many years later, when Sita was abandoned by Ram after his coronation, all the trees, the flowers and deer wept, and the peacock ceased to dance. Kalidasa (5th century CE), in his Ritu Samhara, described the bird through six seasons and its joy when the rains arrive.

The Buddhist Jataka story of Mahamor narrates how the Buddha was a golden peacock in a previous birth. In Buddhist mythology, the peacock is a symbol of compassion and watchfulness. Jain monks once carried fly whisks made of peacock feathers as they were believed to ward off evil.

The peacock is also revered by many tribes in India. The Mori clan of the Bhil tribe of Central India worships the peacock and will not even step on a peacock’s tracks. Similarly, the bird is the sacred totem of the Jat community in North India. The Warli tribe of Maharashtra fixes peacock feathers in a brass pot to represent their God Hirva and they dance around it. The Koyis of the Godavari River in Andhra Pradesh tie peacock feathers to Sitalamata.

When it comes to architecture, the depiction of the peacock goes as far back as the Harappan age (2500 - 1500 BCE). The peacock motif was a recurring theme in large jars back then. Even the 1st century CE Buddhist stupas at Sanchi and Bharhut have carvings of peacocks shown in a welcome pose.

Mughal ruler Shah Jahan (1592-1666), builder of the Taj Mahal, commissioned the Peacock Throne, made of gems and jewels, that was the envy of the medieval world. The top of the throne had two peacocks facing each other, like the peacock guardians of the Islamic gates of paradise and recreating the Persian belief that two peacocks facing each other symbolizes the duality of nature.

In the 19th century, the Mayuri veena was a popular instrument in royal courts. Even in textiles like the Kanthas of Bengal and Kutchhi work in Gujarat, one finds peacock motifs. And, finally, today, seldom do you find a lorry or a truck in northern, western or central India without this beautiful bird painted on its rear. 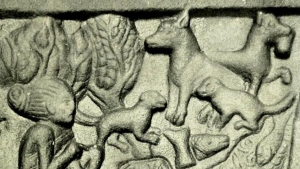 mythology coins art Birds animal animals
You May Also Like
History Daily
Moamoria Rebellion: The Revolution that History Forgot
By Mahasweta Dey
A 30 year civil war, a kind of ‘people’s revolution’, that hollowed out the Ahom kingdom from within
Amazing India
Finding the Indus Valley Civilization
By Anshika Jain
Catch the riveting story of the most significant archaeological finds of the 20th century
History Daily
Anjediva Island: Goa’s Unknown Treasure
By Yash Mishra
Discover the tiny island of Anjediva in Goa that has remained important for the last 2,000 years.
Living History
Emperor Jahangir: The Naturalist
By Anshika Jain
Read all about the wild obsession of a quirky Emperor, with his pets and other animals
Support
Support
Each day, Live History India brings you stories and films that not only chronicle India’s history and heritage for you, but also help create a digital archive of the 'Stories that make India' for future generations.