An illustration from ‘Legends of Ancient Persia’|Chatterjee & Lal

Study for “Kamrelzaman before his father”, for Rashtrapati Bhavan, Circa 1929|Chatterjee & Lal

A misunderstanding in Art, 1933|Chatterjee & Lal 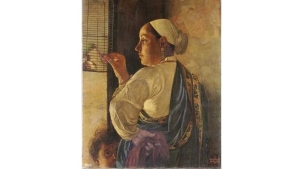