The Unique Craft of Rajasthan’s Puppeteers

Rajasthan is known for colour, crafts and its many performing arts nurtured in its desert landscape. One of these is the Kathputli ka Khel, a unique combination of local legends and crafts that come together in stunning performances mounted by puppeteers.

It is believed that Kathputli ka Khel, seen in every part of Rajasthan today, originated in Nagaur near Jodhpur, on the edge of the Thar Desert. The word ‘kathputli’ literally means a ‘wooden toy’, being a combination of ‘kath’ (wood) and ‘putli’ (toy). These artistes fashion the puppets themselves and, along with the unbelievably deft manoeuvring of their ‘toys’, they bring to life folk tales that they narrate throughout the performance.

These puppeteers are traditionally of the Bhat community, who were originally agriculturalists and led a nomadic existence.

At some point, they became puppeteers, exhibiting astonishing manual dexterity rooted in an understanding of anatomy, rhythm and control.

A performance of the Kathputliwalas |Wikimedia Commons

In medieval times, the Bhats would travel from village to village, narrating their tales to rapt audiences. These tales, based largely on the exploits of local heroes, were one of the few forms of entertainment in those times. The puppeteers would be rewarded in cash, livestock or agricultural produce.

Interestingly, the stories they narrated were rarely religious and were, instead, focused on entertaining their audience. Their tales became so popular that the Kathputliwalas started getting patronage in royal courts. As a result, the puppeteers settled in different kingdoms and every major royal court in medieval Rajasthan had its own kathputliwala, who was also called a charan.

The charan, a bard and puppeteer rolled into one, developed puppets and tales that depicted the rulers, royal families and members of the court in tales of valour, bravery and chivalry. An additional role they played was that of genealogists for their patrons.

A child with the puppet|Wikimedia Commons

The other popular performance is a dance performed by a kathputli, popularly called ‘Anarkali’.

The body of the puppet consists of a face and neck made from a single block of wood, which is then connected to the torso and arms made of stuffed rags. The entire puppet is draped in clothing made of traditional fabrics like leheriya and bandhej, which are further decorated with gota pati. Usually, the female puppets lack legs, which is not apparent due to the way they are draped and the skill of the puppeteers. The faces of the puppets are beautifully painted and ornamented. They are characterized by elongated eyes and impressive moustaches for the men. The puppet is usually maneuvered with just one string connected to the puppet’s waist through the head, sometimes with additional strings connected to the arms.

Traditionally, men work the puppets while women provide accompanying music by playing the dholak, tabla and other percussion instruments. The songs are sung by women interspersed by whistles and other sounds made by the men.

The Kathputliwalas regard their puppets almost as they do humans. Each puppet is handed from generation to generation, and when it can no longer be used, a prayer is said and it is floated down a river to mark its ‘death’. It is believed that the longer the puppet stays afloat, the more blessed its existence is supposed to have been.

Over time, the many entertainment opportunities that became available to people meant that the patronage enjoyed by the Kathputliwalas declined considerably.

Now, they perform at hotels, restaurants and sites that cater to tourists. To stay relevant, they have expanded their repertoire to include contemporary and popular stories, including those influenced by Indian films. Sadly, their livelihood is no longer sustainable, and many have resorted to making and selling the kathputlis as souvenirs.

A performance at a hotel|Wikimedia Commons

The Kathputli ka Khel is dying a slow death and we need to preserve it, not only because of its cultural value but also because of the great degree of skill and knowledge it encompasses. 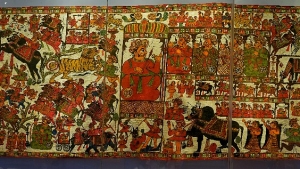