It’s a timeless classic and a rite of passage for every child of every generation, across the world. There can be only one epic tale with such universal appeal and that’s Rudyard Kipling’s The Jungle Book.

The book was adapted to the big screen decades ago and has also been the inspiration for musicals. Why, one of its songs, The Bare Necessities, was even nominated for an Academy Award. Just say those magic words – The Jungle Book – and a rush of visuals, bits of dialogue and songs flood the mind. Although most of us are acquainted with the happy-go-lucky Disneyfied version, Kipling’s tale itself has many dark undertones.

The Jungle Book was written by Rudyard Kipling, future Nobel Laureate and child of colonial India, and published in 1894.

Rudyard was the son of John Lockwood and Alice Kipling, who had come to India to seek opportunities in the mid-19th century. Lockwood was an artist and started his career in India in Bombay, and later moved to Lahore, where he was the Principal of the Mayo School of Arts (now the National College of Arts).

Rudyard Kipling was born in December 1865 in Bombay on the campus of the Sir JJ School of Art, where his father taught architectural sculpture. Rudyard Kipling had an enchanting childhood in Bombay and he wrote about Bombay in his poem, To The City of Bombay:

Mother of Cities to me,

But I was born in her gate,

Between the palms and the sea,

Where the world-end steamers wait.

His early years have been described as a magical, wonderful time in his autobiography Something of Myself. He describes how his Goan-Portuguese, Roman Catholic ayah (care-giver) and Hindu bearer would take him and his sister to the fruit market and how lives were full of the sights and sounds of India.

He interestingly contrasts the manner of his native ayah against the formal etiquette of an English household and writes, “In the afternoon heats before we took our sleep, she [the ayah] or Meeta would tell us stories and Indian nursery songs all unforgotten, and we were sent into the dining-room after we had been dressed, with the caution, ‘Speak English now to Papa and Mamma.’ So one spoke ‘English,’ haltingly, translated out of the vernacular idiom that one thought and dreamed in.”

However, this idyllic time came to an end when Rudyard was sent to England at the age of five.

He and his three-year-old sister Alice lived in Portsmouth with the Holloways, a couple who boarded British children whose parents lived abroad. This proved to be a thoroughly miserable experience for both the children and they were finally removed from that home in 1877 by their mother. Rudyard came back to India in 1882 and worked as a journalist for many years.

Mowgli with his wolf-pack after vanquishing Shere Khan|Wikimedia Commons

However, this experience of being taken away from home and the alienation he experienced at the Holloways left a lasting impression on Rudyard and is believed to have played a role in the theme of ‘belonging’ and ‘alienation’ in his most well-known work The Jungle Book.

Kipling projected many of his experiences and feelings through the wolf-cub Mowgli, a boy raised away from people of his own kind and ends up being a part of an altogether different community and set of people.

However, life is not simple for Mowgli as he is summarily rejected by both these communities due to his differences from them, making him remark at one point, “Man pack and wolf pack have cast me out… now I will hunt alone in the jungle.” The book may be a children's book ostensibly but it explores the very grown-up themes of belonging and alienation.

The first edition of the book|Wikimedia Commons

Many Short Stories
Kipling wrote The Jungle Book shortly after his wedding, when he was living in Vermont in the US, in the house he had named ‘Naulakha’, inspired by the Naulakha Pavilion at Lahore Fort. What you probably don’t know is that The Jungle Book is in fact not a novel but a collection of stories and was followed by The Second Jungle Book in 1895.

Mowgli and his band, introduced in the story Mowgli’s Brothers, appear in a total of nine connected stories in The Jungle Book and The Second Jungle Book in a non-linear manner. The first story Mowgli’s Brothers was actually first published in the St Nicholas Magazine in 1894, before becoming a part of the book. The Jungle Book, in fact, contains many other stories set in different geographic locations and with exotic animals and people belonging to various ethnicities.

Baloo and Bagheera illustrated in the first edition|Wikimedia Commons

The story of the wolf-boy and his adventures did, however, become the most popular of these tales and brought names like Baloo, Bagheera, Shere Khan, Kaa and Bandar Log into common parlance today.

The Influences
Kipling was influenced by many of his own experiences in India as well as things he had read and heard from different sources. One can see the influences of the Panchatantra and Jataka Tales, with their anthropomorphized animals and teachings, in the stories of The Jungle Book. Kipling may also have used elements from the stories his ayahs told him.

An 18th century illustrated manuscript of the Panchatantra|Wikimedia Commons

The story of Mowgli is believed to have been inspired by the many stories of feral children which were popular in colonial India, some of which were hoaxes and some quite real. One of the most popular of these cases was that of Dina Shanichar, who was found by hunters near Bulandshahar and taken to the Agra Medical Missionary Training Institute. Sanichar lived his entire life at the orphanage before passing away around the age of 34 in 1895. Despite having lived with humans for over 20 years he didn’t learn to speak and did display some very wolf-like characteristics throughout his life.

A large number of these stories come from the erstwhile Oudh province although there are other similar cases from different parts of India. It is highly likely that as a journalist and writer living in India, Kipling must have been aware of these stories.

Interestingly, shortly before Rudyard Kipling started writing The Jungle Book, his father Lockwood had published Beast And Man In India: A Popular Sketch of Indian Animals In Their Relations With The People, in 1891. One can assume that this book did have a significant influence on the animals Rudyard writes about in his book.

The animals that play a role in the story are a mix of real and imaginary creatures, with some imbued with the characteristics of different animals.

Bagheera, a black panther, is a colour variant of the spotted black leopard found in parts of Asia and Africa. Baloo, probably derived from the Hindi word for bears, ‘bhaloo’, has the physical appearance of a sloth bear but has the eating habits of the black bear. Shere Khan, Mowgli’s arch enemy in the story, is the Bengal Tiger, a species once found all over the country but now endangered.

Shere Khan from a 1924 publication of the book|Wikimedia Commons

Mowgli’s adoptive mother Raksha is an Indian wolf, a species found across the country which is similar to wolves across the world. Kaa, the hypnotic snake, is an Indian rock python, which is non-venomous and can grow up to 21 feet long. The Bandar Log, the troupe of monkeys that kidnapped Mowgli, is probably the long-tailed langoor, a species found extensively in Western and Central India.

The story is set in ‘Seonee Hills’, a corruption of ‘Seoni’ in modern-day Madhya Pradesh. While the Pench tiger reserve is the closest forest to the town of Seoni, the jungle which is believed to be the setting of the tales is the Kanha Tiger Reserve in Madhya Pradesh. The Bandhavgarh reserve is yet another forest that can be identified with The Jungle Book since it is home to historic ruins which are the site of an important story involving Mowgli and the Bandar Log.

Although, at present, Pench, Kanha, Bandhavgarh and Panna are disjointed National Parks and Tiger Reserves in the state of Madhya Pradesh, in colonial times, they would have formed a continuous forest corridor.

Kipling had never visited Seoni and, in his own words, he got all his information from a book by Robert Armitage Sterndale, a district officer in the mid-19th century who published Seonee, Or Camp Life on the Satpura Range (1877). In fact, the spelling of ‘Seoni’ used by both Sterndale and Kipling wasn’t commonly used, and even the colonial administration generally used ‘Seoni’, a spelling still in use today.

Interestingly, the original setting of the story was the Aravalli Hills (Aravulli Hills), which were later changed to the Seonee Hills. We know of this due to an early draft of The Jungle Book, which Kipling had gifted to Susan Bishop, a family friend who had helped him and his wife during the birth of their first child Josephine in December 1892.

Kipling had dedicated the book to his daughter Josephine, who sadly passed away at the age of six.

The book was a grand success immediately after its publication and was lapped up by audiences across the world. It was an intriguing and exotic tale with a very human message. While the story was popular since its original publication, the 1967 Disney production propelled it into the imagination of a whole new movie-watching generation. Interestingly enough, it was also the last movie personally supervised by Walt Disney. In 2016, Disney created yet another movie based on the book, this time a live-action version, which introduced the story to a whole new generation.

The poster for the 1967 Disney production|Wikimedia Commons

Kipling may be a rather divisive figure today, the poster child of imperial arrogance but what one can’t deny is that the world he wove through his stories was magical. The tale of the human child raised in the lap of nature, in the most elemental environment, has a visceral appeal for all. 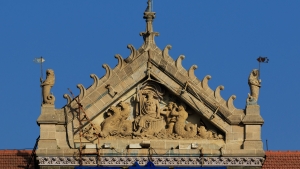