History has made heroes of ordinary men but some heroes and martyrs are destined to live in the shadows of others. One of these brave souls scarcely remembered today is a patriot in the war of India’s independence against the British. A soldier named Bindee Tewary, he led the Revolt of 1824 against the British East India Company in Barrackpore near Calcutta.

Yet Barrackpore is remembered for another, more dramatic reason. It was here that Mangal Pandey fired the first shot that is said to have sparked the Revolt of 1857. He was a sepoy in the 34th Bengal Native Infantry regiment of the British East India Company. On 29th March 1857, Mangal Pandey got into an altercation with the British officers over the cartridges smeared with beef and pork fat. For this, he was hanged on 8th April 1857. But his name would be immortalized in history.

Although the revolt of 1857 is generally considered India’s First War of Independence, there are many who argue that it is not. They count the Vellore Mutiny of 1806 as the first large-scale violent uprising, and the Barrackpore Revolt of 1824 as the second one.

in 1824, the First Anglo-Burmese war was at its peak and it was helmed by the then Governor-General Lord Amherst. It was a war that was primarily fought for control of what is today’s North East India. In 1822, the Burmese had invaded Manipur and Assam leading to the war with the British East India company.

The troops of British East India company’s Bengal army were to be transported by sea to Burma but they were hesitant to be shipped overseas. There were two reasons: one, the troops, comprising mostly upper-caste Hindus, were afraid of ‘kala pani’, or the cultural taboo that banned crossing the ocean as it was believed to dilute one’s caste identity; and, two, the sepoys’ belief that the Burmese people practiced black magic.

Nevertheless, their protests in Mathura was ignored and the 1,400-odd Indian troops, which included the 47th, 26th and 62nd regiments of the Bengal Native Infantry, were to travel to Chittagong before they left for Rangoon via ship. Among the leaders of these troops was Sepoy Bindee Tewary. We know little about who he was and where he came from. We can just deduce from his name that he was a ‘Purbia’ (from East UP) Sepoy serving the Bengal army.

What made matters worse was that the troops had to organize their own provisions and even transportation, with the Company making these arrangements only for their officers. En route to Chittagong, they sepoys briefly broke the journey at Barrackpore but there were no bullocks available to help transport their luggage as the animals had already been purchased and transported for the conflict in Rangoon. Their ‘luggage’ consisted of their personal belongings, cooking utensils, bedding, muskets and ammunition, which they had carried this far on their backs and shoulders.

The sepoys had already travelled 800 miles (1,287 km) on foot and, without much rest, had to hurry to Chittagong. Exhausted and angry, they demanded three things: better battle gear, transportation for their belongings and twice their usual allowance (bhatta) for fighting in hostile territory.

A view of Barrackpore House, with the reach of the river by James Baillie Fraser (1826)|Wikimedia Commons

The British turned down their demands. They insisted that the soldiers carry their own luggage and said they could lighten their load by leaving behind what they couldn’t take. Next, the commanding officers offered to pay Rs 4,000 in advance to each regiment but it wasn’t enough to cover all the sepoys. Also, it meant the sepoys would still have to pay baggage charges from their own pockets.

The troops were not only tired and humiliated, but they also felt their culture was being disrespected and had reached the end of their tether. On 1st November 1824, Bindee Tewary refused to follow the orders and he was joined by 11 others, all of them battalion leaders.

The 26th Regiment had been ordered to march first, followed by the 47th and then the 62nd Regiment. In a last-moment change of orders, the 47th Regiment was asked to commence the march on 1st November 1824, followed by the other two regiments a week later. A parade was held on 1st November, during which the soldiers of the 47th Native Infantry appeared without their knapsacks and refused to bring them even when ordered to do so. Once again, they demanded carriage bullocks and payment of double bhatta and refused to march without their grievances being redressed.

The commanding officer, General Dalzell, was unable to pacify them and proceeded to Calcutta to consult the Commander-in-Chief, India, General Sir Edward Paget. The mood had spread to the other two regiments and 20 Indian sepoys from the 26th Regiment and 160 from the 62nd Regiment defected and joined the ranks of the rebelling sepoys of the 47th Regiment.

Under the leadership of Tewary, the soldiers maintained order during the day and remained on the parade ground all night, while a petition was sent to Paget, who arrived from Calcutta on hearing of the escalation. The sepoys presented their demands to Paget via an emissary and explained that their refusal to be shipped overseas was due to religious scruples. They requested to be dismissed from service if their demands were not met.

Paget replied that legitimate demands would be addressed only after the sepoys laid down their muskets. But the promise of reconsideration was not enough for the sepoys to give up their positions. Paget, an old-school disciplinarian of the Royal Service, viewed this refusal as an act of armed mutiny. He summoned two regiments of European troops, the 47th (Lancashire) Regiment of Foot and the 1st (Royal) Regiment, as well as troops of the Governor-General's Bodyguard from Calcutta. He also brought in horse artillery from nearby Dum Dum.

On the morning of 2nd November, the reinforcements and the loyal members of the 26th and 62nd Regiments moved into position. They secretly surrounded the sepoy campground and a final message was sent to the mutineers, demanding that they lay down arms before any discussion on grievances. It is said they were given only ten minutes to make up their minds.

The sepoys either hesitated or rejected the ultimatum and Paget ordered two cannons to fire on the ‘rebels’, followed by an attack from the rear by the secretly placed horse artillery. Surprised by this sudden assault, the sepoys tried to flee but the rest of the British regiments attacked from every direction. Some of the sepoys jumped into the Hooghly River to escape but they drowned, others took refuge in local homes but the loyalists chased and killed them with bayonets. Many bystanders, including women and children who happened to be in the neighbourhood, were also killed during the operation.

Later, it was found that the muskets of the Indian sepoys had not been loaded. The report prepared by the investigating officers concluded that this implied that no violence had been intended by the ‘rebels’. Still, Tewary and the 11 other leaders of the revolt were tried and sentenced to death. Tewary was singled out for particularly brutal treatment—his limbs were chained, he was hanged from a peepal tree and his body was allowed to rot for days. It was a chilling and barbaric message from the British to anyone harbouring rebellious thoughts.

In 1827, the Barrackpore Mutiny was debated in the House of Commons, to consider a fresh investigation against Amherst and Paget. It was quashed as the majority backed the oppressors.

Six months after Tewary’s death, some soldiers built an informal ‘shrine’ in his memory under the peepal tree where he had been hanged and also installed a small bust of Lord Hanuman there. The memorial, called ‘Baba Binda’, is maintained by the Army in the Barrackpore cantonment to this day. A likeness of Tewary was also installed there. Initially, it was dressed in the Company soldier uniform but painted olive green after Independence.

It is said that Mangal Pandey often visited this memorial and the martyred soldier became his inspiration when he fired the shot that triggered the Revolt of 1857, 33 years after the Barrackpore Revolt. Retired Indian Army chief General V K Singh hints at this in his book Barrackpore Mutiny, Contribution of the Armed Forces to the Freedom Movement in India:

“What shocked everyone was not the mutiny itself but the brutal manner in which it was quelled. The bloodshed could have been avoided if the situation had been handled with tact and understanding by the officers, particularly General Paget. Though the mutiny was quickly suppressed – it lasted less than a day – its long-term effects were far-reaching and had a bearing on the Great Indian Mutiny of 1857.” 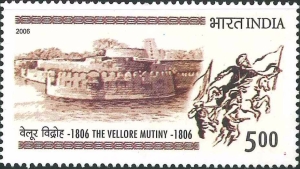 Freedom Struggle freedom fighter Independence Movement Freedom Movement
You May Also Like
Snapshort Histories
Discovering Amritsar’s Secret Tunnels
By Aashish Kochhar
Amritsar holds a dark secret waiting to be told–a network of underground passages that dates back to its bloody past
Snapshort Histories
Revolt of 1857: The Tragedy of Kanpur’s Massacre Ghat
By Swapnil Tripathi
On the banks of the Ganga in Kanpur is a ghat that was bathed in blood during the Revolt of 1857.
Cover Story
Pandemics Through Indian Literary Lens
By Saurav Kumar Rai
The biggest names in Hindi literature have put a human face to these catastrophic events
History Daily
Kolkata’s Victoria Memorial
By LHI Team
The Victoria Memorial of Kolkata is the most magnificent of all the memorials dedicated to the queen in the country
Support
Support
Each day, Live History India brings you stories and films that not only chronicle India’s history and heritage for you, but also help create a digital archive of the 'Stories that make India' for future generations.