Calcutta: Once an Anti-Pollution Pioneer

As the winter smog settles across North India, and Kolkata and Delhi compete for the title of ‘most polluted city in India’, hold your breath just a little longer as you read this – Calcutta was the very first city in India, and only the second in the world, to enact anti-air pollution legislation.

Wait, it gets even more fantastic. When the smoke alarm finally went off in the imperial capital, the British administration cracked down on polluters, and it took just four years for the air to clear up, and only another 13 for Calcutta’s air to be declared “cleaner than any major European industrial city”. Here’s the incredible story.

Calcutta witnessed a cataclysmic event in the mid-19th century – the opening of the railway line between the city and the Ranigunj coalfields in 1855. Suddenly, coal became easily available to industries, propelling a massive increase in the number of coal-fired steam engines used by ships, trains, engineering workshops and other factories, municipal water pumps, a growing number of jute mills and even the government mint. Coal was the ‘black gold’ of those times, that fulled trade and commerce.

Up until then, Calcutta had been chugging along on fuel that consisted mainly of wood, dung and vegetable oil but, now, chimneys spewing dense, black smoke began sprouting all over the city. What made matters worse was a unique combination of topographical and weather conditions that have always made Calcutta vulnerable to smog.

For one, the city is prone to temperature inversions, which traps cooler, soot-filled air at lower levels. Also, unlike Mumbai, Kolkata (Calcutta then) does not experience winds that blow away the smoke and help it to dissipate, especially between November and March. This leaves the city covered in a thick layer of smog, particularly in winter. Thus, by the 1870s, Calcutta was choking on its own emissions.

The colonial government’s response to this is documented by Janine Wilhelm in her book, Environment and Pollution in Colonial India (2016). The air was thick with Smog and this created a crisis in the city. The visibility was really low and people were dying inhaling the poisoned air. The polluted air was a great leveler , affecting both the rich and the poor. As the Calcutta elite put pressure on the government to tackle the ‘smoke nuisance’, the administration came up with The Calcutta and Howrah Smoke-Nuisances Act of 1863. The act was modelled on a similar one enacted in London a decade earlier. It demanded that ‘the best practicable means’ be used to lower emissions.

But there were two major problems with this early attempt. First, the language of the act was vague and it did not include specific recommendations; and, second, the outlook of the government remained pro-industry.

Then, after a serious bout of smog in the winter of 1878-79, the authorities were forced to sit up and take notice. This time, a special inspector was appointed and he was given specific duties, like supervising boilers, checking smoke emissions from chimneys, issuing warnings, and, if necessary, prosecuting mill managers for violations.

But even this attempt was destined to fail. In spite of the pressure from the public, the government was not keen on immediate prosecutions and preferred a more advisory approach as the government still succumbed to pressure from industry. Also, the legislation gave mill managers a way out. Thanks to the phrase ‘best practicable means’, they were able to argue in court that there had been no neglect or violation!

It was only at the turn of the century that the anti-smoke lobby was able to have its way.

In 1899, George Nathaniel Curzon of Kedleston, or Lord Curzon, was appointed Viceroy of India. While decidedly autocratic, Curzon was also responsible for a range of positive initiatives across India, including the preservation of historical monuments. In Calcutta, he took a serious view of the dangerous levels of air pollution in the imperial capital.

In his speech to the Bengal Chamber of Commerce, on 12th February 1903, he said the smoke nuisance in the city was so bad that it “sometimes almost makes one forget that this is an Asiatic capital, which besmirches the midday sky with its vulgar tar brush and turns our sunsets into a murky gloom. I am reluctant to see Calcutta, which has risen like a flame, perish in soot and smoke; and I may inform you that we have an expert from England, even now on the seas, coming out here to advise us as to how we may combat this insidious and growing danger”.

The expert in question was Frederick Grover, who had served as the Smoke Inspector for Leeds, one of the most polluted cities in England at the time. The Leeds Smoke Abatement Society had estimated that some twenty tons of soot was being sent into the atmosphere by industrial chimneys in the city and had taken measures to improve the situation.

Although this sounds like a lot of bureaucratic red tape, it worked. It was a serious attempt to plug all the existing loopholes. Violations were now quantifiable, thanks to daily measurements of smoke emissions using standardised procedures. The density and duration of smoke emissions was measured and regulated.

More importantly, a serious attempt was made to secure the cooperation of industrialists who had earlier fought smoke regulation tooth and nail. The Bengal Smoke Nuisances Commission had an equal number of government officials and industry representatives, and members of the Bengal Chamber of Commerce were consulted when drafting the law.

This was an age when boilers had to be manually stoked, and improper stoking was identified as one of the major reasons for excessive smoke. Further problems were caused by rice mills which used husk as fuel, which led to a lot of smoke. The commission was empowered to fine boiler mechanics for bad stoking practices and mill managers for failing to control emissions.

This together with several major prosecutions saw a dramatic improvement in Calcutta’s air quality over the next few years. By July 1909, The Times of India reported, “The average emission of dense, black smoke is now less than one sixth of what it was in April 1909.” Oil and gas motors had also slowly started replacing coal, leading to further reductions in emissions. In 1912 alone, more than 100 electric motors had been installed in the city of Calcutta.

That the commission took its job very seriously is proved by a Times of India report from July 1912. Over the course of the last year, the report said, the chief and assistant inspectors had made 4,463 observations of smoke emissions. They had also inspected factories, stoking appliances, fuel furnaces and tested 278 cases. The public also supported the commission enthusiastically, and in several cases, drew the attention of the commission to cases of emissions that they had missed.

Add to this a complete ban on the setting up of new factories in the central Kolkata area. Newspaper reports from 1923 show that the government had gone so far as to ask all established workshops and factories within the city to move out.

By 1921, the number of complaints from the public about the smoke nuisance had started falling, and by 1922, the Smoke Nuisances Commission reported that Calcutta’s air was cleaner than any major European industrial city, even though the number of mills had doubled in the last decade. In 1924, the Christian Science Monitor reported that Calcutta had become “a distinctly cleaner city”.

But the work of the commission continued unabated. By 1926, Calcutta had one of the most ambitious, comprehensive, and efficient smoke pollution control systems in the world, writes Wilhelm. That year, the Central Smoke Observatory was constructed on top of one of the tallest buildings in the city. This would allow the Smoke Inspector to survey every factory chimney within a circumference of 80 miles! Eventually, even the Calcutta Port Commissioners and the railways were brought under the purview of the Smoke Nuisances Commission.

One hundred and fourteen years since Curzon’s law, Kolkata’s smoke alarm is sounding again. The city’s Air Quality Index, especially in winter, is warning of dire consequences if air pollution levels are not rolled back. More than seventy years after independence, perhaps there are lessons to be learned from the colonial government’s strict, pragmatic and effective approach to one of the biggest problems of the modern age – the most potent lessons being an administration and a public that cares. 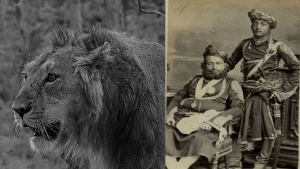 British Calcutta Bengal West Bengal Kolkata colonial Pollution
You May Also Like
Living History
The Bombay School: Redefining Art In Colonial India
By Anshika Jain
Explore how Mumbai’s JJ School of Art shaped art in India in the 19th and 20th centuries
Snapshort Histories
Mohun Bagan: A Symbol of National Identity
By Sudipta Biswas
When Mohun Bagan lifted the IFA Shield in 1911, its win was more than just a massive sporting victory.
History Daily
Salar Jung Museum’s ‘Double Statue’
By LHI Team
Catch the story of Salarjung Museum’s Double Statue linked to one of the greatest works in German literature.
History Daily
Bhaskar Varman: The Great Assamese Emperor
By Mahasweta Dey
Bhaskar Varman was one of Assam’s greatest emperors who expanded the borders of Kamarupa kingdom
Support
Support
Each day, Live History India brings you stories and films that not only chronicle India’s history and heritage for you, but also help create a digital archive of the 'Stories that make India' for future generations.