Tamil’s place in the Indian language pantheon is an important one. As an ancient and highly developed language that evolved independently from Sanskrit and Sanskrit-derived languages, it occupies a special place. The languages of the Dravidian language family, to which Tamil belongs, have time and again, asserted their separate origins and history which is long. After all, among Tamil’s more vehement assertions is the fact that it has ancient literature.

Tamil literature goes back to the Sangam Era, named after the assembly (sangam) of poets based in Madurai. Tradition holds that there were two earlier such sangams, the works of which have been lost. What has come down to the present-day, dates to the first and second century CE.

The poetics of these sublime works of poetry are based on the Tolkappiyam, which is the earliest Tamil grammar.

At some point after the Sangam period, two epic narratives were written—the Silappadikaram (the Tale of an Anklet) by Ilango Adigal and another closely-linked work, the Manimeghalai (named after its heroine) by Sattanar.

Tamil literature goes back to the Sangam Era, named after the assembly (sangam) of poets. Tradition holds that there were three sangams. The first sangam ‘sat’ for 4,440 years and was presided over by the sage Agastya, the legendary progenitor of the Tamil language. His book, the Akattiyam was the most important text of this first sangam. This legendary first work of early Tamil literature has almost entirely been lost except for a few verses that are quoted in commentaries dating back to the medieval period. This first sangam was convened in a city to the south of the city of Madurai that was later swallowed by the sea.

The second sangam convened in a city on the eastern coast of the Tamil region, a legendary city called Kapatapuram. This Sangam supposedly ‘sat’ for 3,700 years before Kapatapuram was destroyed by a flood. The Tolkappiyam, which is the earliest Tamil grammar, composed by Tolkappiyar, the supposed disciple of Agastya, is said to date back to this sangam. Virtually, every other work of the first two sangams have been lost.

What has come down to the present-day dates to the third Sangam, which ‘sat’ in Madurai, sometime in the first or second century CE. Tradition holds that this Sangam ‘sat’ for 1,850 years.

What is today referred to as Sangam literature consists of eight anthologies (Ettuthogai) and ten long poems (Pathupattu), all of which are the products of the third sangam. The poetics of these works of poetry are all based on the Tolkappiyam. These works too were forgotten for centuries before the work of scholars like U.V. Saminatha Iyer, C.V. Damodaram Pillai and A. Narayanswami Iyer in the late nineteenth and early twentieth centuries enabled the ‘rediscovery’ of these works for the modern era.

At some point after the Sangam period, two epic narratives were written—the Silappadikaram (Tale of an Anklet) by Ilango Adigal and another closely-linked work, the Manimeghalai (named after its heroine) by Sattanar.

These narratives continue to be read and studied and constitute an important component of Tamil culture and literature.

The story of Silappadikaram

The story of Silappadikaram (sometimes spelt Cilappatikaram) begins in Puhar (Poompuhar), the ancient port-town in the northern region of Tamil country. Puhar is no ordinary town. It is the capital of the Chola kingdom and enjoys trade relations with Sri Lanka, Burma and even distant Java. Ships of all kinds sail in and out of its harbour and foreigners are forever crowding its markets looking for things to buy. Kovalan, the son of one of Puhar’s most prominent and wealthy merchants marries Kannagi (sometimes spelt Kannaki). The young couple set up home and are very much in love before Kovalan deserts his wife entranced as he is by the obvious charms of a dancer, Madhavi. Saddened by Kovalan’s action, Kannagi nevertheless puts up with the indignity.

Some years later, suspecting Madhavi of infidelity, Kovalan returns to Kannagi who large-heartedly welcomes him back. In the meantime, Kovalan has frittered away his fortune. The couple then relocates to Madurai, the capital of the Pandya kingdom in a bid to rebuild their life. All that Kovalan and Kannagi have left as capital to begin life anew are a pair of anklets. Kovalan offers one of the anklets to the royal goldsmith for sale. The goldsmith, in turn, implicates Kovalan in the theft of the queen’s anklet. Kovalan’s wrongful execution which follows soon after drives Kannagi to rage. With her other anklet in hand, Kannagi confronts the king and proves that Kovalan was no thief as the queen’s anklet contains pearls whereas hers contained gems.

Devastated, the king dies of remorse and guilt as does his queen. Beset by rage, Kannagi walks out of the palace, wrenches her left breast from her body and hurls it at the city of Madurai, which is then consumed by flames.

On the advice of the guardian deity of Madurai, Kannagi then undertakes a journey to Kodungallur in the Chera kingdom, from where she attains salvation.

Tradition holds that the writer of Silappadikaram is Ilango Adigal (sometimes spelt Ilanko Atigal), the younger brother of the Chera king, Senguttuvan. While one group of historians hold that Senguttuvan lived in the 2nd century CE, others date his reign to a wider window – 2nd to 5th century CE. The story goes that an astrologer predicted that Ilango would reign over the Chera kingdom which angered Senguttuvan who was the older son. In deference to Senguttuvan, Ilango renounced all claims to the throne, became a Jain ascetic and later composed the work.

Senguttuvan himself features in the work when he raises a temple to Kannagi, in the post-Madurai section of the work.

Interestingly, Senguttuvan also features in the Pathupattu or the Ten Idylls, an anthology of ten books which is considered the oldest surviving works of Tamil poetry. This is part of Sangam literature.

Some scholars opine that it is probable that like Homer, Ilango Adigal wrote down the oral narratives that were in circulation at that time and the Silappadikaram is therefore not the work of one, but several writers.

The Manimeghalai (sometimes spelt Manimekalai) by Sattanar (sometimes spelt Cattanar) is a sequel to the Silappadikaram and tells the story of the eponymous daughter of Kovalan and Madhavi. Manimeghalai, like her mother Madhavi, is a dancer, who gives up her life as a courtesan to become a Buddhist nun when she hears of the death of Kovalan and the doings of Kannagi. The work also features the tragic love story of the prince Udayakumaran whose love for Manimeghalai is doomed to be unrequited on account of her decision to renounce the world.

Like the Silappadikaram, the Manimeghalai also features an apocalyptic section when the city of Puhar is consumed by the ocean akin to Madurai’s destruction by fire.

Sattanar was a Tamil Buddhist and features in the prologue to Silappadikaram. In the prologue, it is Sattanar who tells the Chera court the story of Kovalan and Kannagi and thereafter gently nudges Ilango to write their story even as he assigns for himself the responsibility of narrating Manimeghalai’s tale. Manimeghalai also features a detailed exposition of Buddhist precepts and offers a close look at the practices prevalent at that time.

The narratives as a peek into history

Silappidakaram consists of three kaandam (books) each named after the capitals of the three ancient Tamil kingdoms: Puhar of the Cholas, Madurai of the Pandyas and Vanji of the Cheras. By locating the happenings of the book in each of these cities, the work offers a glimpse into the political setup of the Tamil region at the dawn of the Common era. Kannagi is born in one kingdom, moves to another and finally, attains salvation in the third, underlining the links between the three kingdoms of the deep south of the sub-continent. In the Vanji kaandam, there is also a reference to the Himalayas from where Senguttuvan procures a block of stone to carve the idol of Kannagi to consecrate the temple that is built to commemorate Kannagi and her actions.

Together, the narratives present a comprehensive picture of early Tamil society with its three princely kingdoms, its merchants, princes and its Hindu, Buddhist and Jain populations, all of whom appear to have coexisted peacefully in spite of their differences. When Kannagi and Kovalan make the journey from Puhar to Madurai, they also encounter farmers, hunters and pastoralists who live in the countryside away from the main cities and have their own traditions and ways of life.

Unlike the Sanskrit or even the Greek epics, the twin Tamil narratives, sometimes referred to as the irattaikappiyam, are unique in that they both have women as protagonists. There is no ‘heroic’ angle to the story that features war and its associated trials and tribulations. Instead, the narratives place commoners at the centre of the narrative. That the Pandya king dies, consumed as he is by the guilt of his wrongful judgment is also unique, since the tales refuse to place rulers on a higher pedestal. Instead, rulers are shown to be as accountable for their actions as the subjects they govern.

The Kodungallur Bhagavathy temple in present-day Kerala is closely identified with the tale of Kannagi. Kannagi or Pattini, as she is known, is also present in Sinhalese folklore. Gajabahu, the Sinhalese king is said to have been Senguttuvan’s contemporary (some scholars contest this) and present when the Kodungallur temple was consecrated. Several shrines to Pattini are found throughout the island and she is regarded as a Boddhisattva (an individual on the path to becoming a Buddha). The intertwined early history of the Sinhalese and the Tamils is obvious here as opposed to more modern-day historical narratives that seek to establish that the Sinhalese and Tamils have been two warring communities from time immemorial. 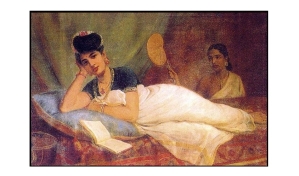 The tale of Kannagi has been made into films and TV serials. A recent English novel, The Prince by Samhita Arni was also based on the Silappadikaram. A statue of Kannagi adorns the avenue beside the Marina Beach in Chennai and is an evocative reminder of the continued presence of the epics in present-day Tamil life.

Karthik Venkatesh is a history enthusiast who writes on lesser-known aspects of India’s history.