Statues of great men usually stand on lofty pedestals, lording over public squares or busy streets. Not this one. The memorial to Kavi Dalpatram, at Lambeshwar ni Pol in Ahmedabad, has clearly been made with much love. The life-like statue of the poet-reformer has him seated with one leg crossed, his empty left shoe obediently resting next to the other one, and his hands clasped on a book.

This 120 kg of bronze likeness of Kavi Dalpatram is seated on a platform where the poet’s home once stood, in a quiet, traditional neighbourhood in Ahmedabad. He grew up like regular kids do but went on to become one of the most towering figures of Gujarati literature.

Dalpatram was a pioneer of modern Gujarati poetry and he used his work to campaign against social evils that were widely prevalent in 19th century India.

What endeared Dalpatram to the people of Gujarat, even more, was the role he played as the ambassador of the Gujarati language.

India in the middle to late 19th century was ridden with the caste system and steeped in superstition. But Western education brought to India by the British created a climate for change. It is against this backdrop that the life of our poet is set.

Location of Wadhwan in Saurashtra|LHI

Dalpatram Dahyabhai Travadi was born to a poor Brahmin family in Wadhwan in Surendranagar district of Gujarat, on 21st January 1820. This was a time when the Union Jack was hoisted on the Gaekwad Haveli in Ahmedabad after the Peshwa’s defeat in the Battle of Kirkee and the British seized the reins from the Marathas. This was also a time when Saurashtra was divided into scores of tiny principalities and Wadhwan was one of them. Literacy was very low and the region was socially backward.

Dalpatram’s father was a staunch Vedantist, Vedanta being one of the six orthodox schools of Hindu philosophy. Dalpatram was taken out of school to be trained in religious scriptures and often beaten when he did not live up to his father’s expectations. Fed up, he left home in 1832 at the age of 12 and wandered with a sadhu for some time.

Soon, he found shelter with his maternal uncle’s family, who were followers of the newly formed Swaminarayan sect. The sect, set up around 1800, focuses on salvation through complete devotion to God and developed through virtues, spiritual wisdom and detachment. The sect attracted a number of followers and Dalpatram became one of them.

The liberal and progressive views of the Swaminarayan sect, including campaigns against sati and female infanticide, had a profound impact on Dalpatram, who started visiting Swaminarayan temples regularly. Apart from their role as places of worship, these temples nurtured musicians, folklore experts and scholars for the sect’s expansion. It was here that Dalpatram received his early training in poetry and mastered the structure of rhyme. Due to his prodigious talent, he was appointed to perform at satsangs (religious gatherings) from 1844.

But a young Dalpatram did not want to limit himself to religious discourse and he started to use his literary flair to serve feudal chiefs in Saurashtra, eulogizing members of the royal family in his verses. This earned him the patronage of the native rulers of Gujarat and he became a part of the darbar culture.

Dalpatram thus travelled extensively across Kathiawad and Kutch, and attended poetic gatherings that took place in temple precincts or royal courts. Gradually becoming a known name in these circles, he was also invited by the poetry-loving seths and wealthy merchants of Ahmedabad to perform at gatherings held in their homes.

In 1845, on one of his trips to Ahmedabad, Dalpatram met Sarabhai Munshi, a Nagar Brahmin, who was so impressed by Dalpatram’s skills that he employed him as a tutor to his son, Bholanath, who went on to found the Prarthana Samaj in Ahmedabad. In 1848, Bholanath introduced Dalpatram to Ahmedabad’s Assistant Judge, Alexander Kinloch Forbes. It was the first time Dalpatram had met an Englishman and this became a turning point in the history of the Gujarati language.

Forbes loved the Gujarati language and literature and was in the process of producing a historical-literary-cultural work on Gujarat called Rasmala. He took Dalpatram’s help, and the latter not only collected manuscripts and material for the proposed work but also taught Gujarati and Braj to Forbes, who when posted in Ahmednagar and Khandesh had also learned Marathi. They read Gujarati poetry together for two hours a day. It was due to his association with Dalpatram that Forbes became exceptionally fluent in the language and the history of the region.

A deep friendship developed between the two and it was Forbes who pushed Dalpatram to start composing in Gujarati. Till then, the poet used to write in Brajbhasha.

In 1849, for the first time, Dalpatram published one of his works in Gujarati.

Titled Bhoot Nibandh, this was an essay on beliefs in ghosts, witches and other superstitions. This was also one of the first prose writings in Gujarati to address a social issue.

Forbes also inspired Dalpatram to write Laxmi Natak (1849), the first modern play in Gujarati, based on the Greek drama Plutus. It is a satirical comedy personifying the God of Wealth and brings forth the poverty of common folk.

An old photograph of Dalpatram|Wikimedia Commons

In 1855, Forbes appointed Dalpatram as the Assistant Secretary of the Gujarat Vernacular Society, which he had founded in 1848 to spread modern education and promote vernacular literature in the state, besides also establishing libraries and hospitals. Dalpatram played a crucial role as a mediator between English officials who had started the Society and the wealthy merchants in Ahmedabad, who donated funds for the Society. He also contributed articles and poems to its newspaper Vartman and journal Buddhiprakash, and later also served as its editor. Dalpatram was a part of the Society for 33 years, finally retiring on a monthly pension of Rs 20 and a purse of Rs 13,000 from the public.

Interestingly, the first official ‘appeal’ for adoption and promotion of the Gujarati language took place in 1863, when Dalpatram was sent by a British officer, T B Kurtis, to the court of the Gaekwads at Baroda. He presented himself as an envoy of the language and asked the ruler for the patronage of Gujarati literature.

When Forbes died in 1865, Dalpatram composed Farbeswirah, an innovative and well-known Gujarati elegy in memory of his dear friend.

Dalpatram then stepped up his effort to drive social change through his writings.

He paid great attention to his language, making sure it was easily understood by the masses.

He also made Buddhiprakash the most popular and instructive magazine of Gujarat. At times, he even read out his verses to children and women before publishing them, to test the simplicity of his style. 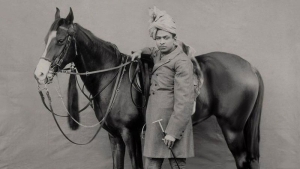 Unlike other reformers of his time, who were revolutionary in their approach, Dalpatram was a firm believer in bringing in change gradually. He felt it was not viable to introduce sudden changes to a society that had centuries-old cultural roots. Dalpatram’s lengthy poem Vencharitra (1868), which deals with the problem of widow remarriage, is often referred to as the ‘Purana or Bible of social reform.’

He was also one of the first to introduce into Gujarati poetry subjects relating to common life – a far cry from the predominantly religious and occasionally romantic and narrative poetry of the earlier period. Handbook of Twentieth-Century Literatures of India, edited by Nalini Natarajan and Emmanuel Sampath Nelson says, “Dalpatram’s poetry had commonplace subjects like trees in a college compound, English law, or even how to write an essay and was replete with his typical sense of humour.”

(The camel points out that in this gathering, there are many animals with crooked limbs, like the crane has a curved neck, parrot, a bent beak; dog, a twisted tail; tiger, misshapen nails; buffalo, warped horns; etc. Hearing this, the fox said that ‘while others have only one part that is crooked, you have eighteen.’)

Another of Dalpatram’s poems, Hunnarkhanani Chadhai (The Invasion of the ‘King’ Industry), allegorically described the disappearance of Indian crafts and industries under the onslaught of England, China and other countries. The suppression of Indian businesses was another topic that Dalpatram commented on extensively. Besides collections of poems, he wrote essays and plays pertaining to social issues, for which he bagged many prizes. These included Gnati Nibandh (an essay on caste) and Deivagna Darpan, which exposed pretentious astrologers.

Dalpatram himself collected his poems in two volumes, in 1879 and 1896, covering over 650 pages. It was a substantive attempt to give cohesive shape to the educational, social and cultural activities in Gujarat. His writings have deeply influenced four generations of modern Gujarat and made him a pivotal figure in the region’s socio-cultural resurgence.

Dalpatram died on 25 March 1898 in Ahmedabad, leaving behind a legacy in his son Nanalal, who too went on to become a noted author and poet in Gujarati literature. Today, Dalpatram is honoured across Gujarat and all of India as a powerful catalyst of social awakening, a literary genius who brought about reforms through the power of his pen.

British Poet Literature Gujarat Ahmedabad Gujarati Saurashtra social reformer language
You May Also Like
History Daily
Moamoria Rebellion: The Revolution that History Forgot
By Mahasweta Dey
A 30 year civil war, a kind of ‘people’s revolution’, that hollowed out the Ahom kingdom from within
Amazing India
Finding the Indus Valley Civilization
By Anshika Jain
Catch the riveting story of the most significant archaeological finds of the 20th century
History Daily
Anjediva Island: Goa’s Unknown Treasure
By Yash Mishra
Discover the tiny island of Anjediva in Goa that has remained important for the last 2,000 years.
Living History
Emperor Jahangir: The Naturalist
By Anshika Jain
Read all about the wild obsession of a quirky Emperor, with his pets and other animals
Support
Support
Each day, Live History India brings you stories and films that not only chronicle India’s history and heritage for you, but also help create a digital archive of the 'Stories that make India' for future generations.