A chance discovery of a commemorative stone slab or stele on the campus of the Bhabha Atomic Research Centre (BARC) at Deonar in Mumbai in 2016 opened up a whole new chapter in the history of Mumbai. It introduced us to the 14th century King Hambirarao, who was perhaps the first to have Mahim, in the heart of India’s commercial capital today, as his capital.

While other inscriptions of Hambirarao had been found earlier, the BARC inscription connected many dots. But before we come to that, it is important to understand what this region was like more than 700 years ago.

The Mumbai Region in the 14th century

According to most historical sources, the Mumbai region was conquered by Alauddin Khilji and his son Mubarak Shah was the governor in 1318 CE, after the final defeat of the Yadava rulers of the Deccan. The last Yadava inscriptions in this region date back to 1300 CE.

Hambirarao’s inscriptions are the first after a gap of 66 years. S M Edwardes, in his work The Rise of Bombay: A Retrospect (1902), says that Mumbai came to be ruled by the Gujarat Sultans in 1348 CE and this has been quoted verbatim since then despite the fact that the Gujarat Sultanate emerged only in 1403 CE.

The only other source for the history of this period is the Mahikavatichi Bakhar (The Chronicle of Mahim), a text that purports to speak about events dating back to the 13th/14th centuries CE but which was actually written in the 16th century CE. The bakhar, a form of historical narrative written in Marathi prose, tells the story of Bimbadev Yadav, son of the last ruler of the Yadavas, who made Mahim his capital in 1295 CE (according to V K Rajvade). His descendants were probably supplanted or succeeded by Hambirarao in 1368 CE.

Thane-Konkan or Konkan/Kukan/Kukin-Thane is an oft-mentioned region in Western Maharashtra comprising the erstwhile district of Raigad and the southern half of the district of (undivided) Thane. This region is mentioned in Shilahara records and was also referred to by travellers like Marco Polo (1290 CE) and Ibn Batuta (1335-1341 CE).

The BARC stele’s reference to Mahim Bimbasthane is a reference to the Mumbai suburb of Mahim, which is called the city/capital of King Bimba. Bimba himself is a fascinating, quasi-historical figure after whom the medieval text known as the Bimbakhyan (which was a part of the Mahikavatichi Bakhar) is named. Mahikavatichi Bakhar describes the reign of a king called Bimba, who ruled over Mumbai from his capital at Mahim.

Stamp issued in honour of Rajwade in 2003

Noted Maharashtra historian V K Rajvade famously translated and published the Mahikavatichi Bakhar in the first decade of the 20th century but most historians regard the text as nothing more than folk tales with little or no historicity.

The bakhar tells the story of a king called Bimba (1295 to 1303 CE), and the antiquity of Mahim clearly indicates that it must have been his capital.

Mahim was a medieval port and a very important site in the 12th/13th centuries CE, as seen from the sculptural and structural Hindu temple remains discovered there.

These remains point towards a temple larger and more ornate than the one at Ambarnath, though it is similar in plan, with an octagonal mandapa. Such a temple of the Shilahara/Yadava style would hardly have been built in a backwater location.

The BARC discovery was a chance find. Dr Mugdha Karnik, Director of the Centre for Extra-Mural Studies, University of Mumbai, had got pictures of two stone objects, one of which was a broken, inscribed stone stele, from Dr Chandrakant Salunkhe of BARC.

At that time, Dr Karnik’s department was carrying out a big archaeological project in Mumbai – The Salcette Explorations Project, to look at the city’s history. The project team painstakingly deciphered the inscription. The BARC inscription is clearly dated to 23rd October 1368 CE. It is in medieval Marathi and is interspersed with Perseo-Arabic and Sanskrit. The date is given in both Hijri (Islamic calendar) and in Salivahana Saka (Hindu calendar).

Before the discovery of the BARC inscription, Hambirarao was known from two prior inscriptions – found in Ranvad in Uran and Nagaon near Alibaug. The inscriptions are dated to 1366 and 1367 CE, respectively.

Hambirarao, unlike his contemporaries, did not mention a genealogy, neither did he mention any religious affiliation. Both these inscriptions, from Uran and Alibaug, were sale deeds executed in his name by his Prime Minister Ari Sinhi Prabhu. But the BARC inscription was different. As far as Mumbai’s history was concerned, it was explosive for those of us studying Mumbai and the region around it.

Along with the name of his capital city where Bimba appears for the first time in a medieval text, the BARC inscription bears the names of numerous other medieval villages in Mumbai. The grant of land mentioned in the inscription is given in a place adjacent to the village of Nanole, which can be identified as the village of Nanale in Deonar and which was abandoned when the BARC campus was built.

The surnames of witnesses give us the names of many other places – Marol, Deonar, Sahar and Dethan (as yet unidentified). We also know that this location (exact name broken off on the stele) was a part of the larger political unit known as Shashti (i.e. Salcette), thus firmly placing the island of Deonar within the Salcette region of Mumbai.

Locations where the inscriptions have been located|LHI

While deciphering the BARC inscription, the team came across a cryptic reference to an undeciphered inscription of Hambirarao from Waghrana. Upon conducting a deeper search, a village called Vaghran was located near Alibaug (a known part of the kingdom of Hambirarao). On reaching the village, sadly, the team realised they had come two years too late. There was a stone stele with an inscription on it and a gadhegal (ass-curse stones) carved at its base but, two years earlier, it had been temporarily moved and the local women had used it to wash their clothes! All we could say was that it was a 20-line inscription in medieval Marathi inscribed on a reused stone slab with a crudely inscribed gadhegal image. But it was in the right place and was most definitely the lost Vaghran inscription of Hambirarao.

Villagers also described a group of city folk who had come 20 years ago and ‘applied a wet cloth and ink’ which is a description of the archaeological process called ‘taking an estampage’ or the process of copying inscriptions. Somewhere out there is a copy of the original inscription and we hope it will surface.

Hot on the heels of the BARC inscription, the team that discovered the Vaghran inscription presented their findings, and within a few months (in May 2018), a very excited colleague from the University’s Department of Geography, Dr Gogate, reported yet another intact stele with a gadhegal from the village of Nandgaon in Raigad District. We rushed there, to a small betel nut farm, and found an absolutely intact stele with yet another inscription of Hambirarao dated to 1369 CE. The readable portions reveal that the text is near-identical to the Nagaon inscription. The stele is currently being deciphered by the team that located it.

What is clear after the discovery of these five inscriptions is that Hambirarao was an important local ruler and that his kingdom stretched from Thane/Salcette in the north all the way to Nandgaon in the south, a distance of at least a 110 km, perhaps even more and extending eastward all the way to the Western Ghats.

He is one of the first independent rulers of this region and his inscriptions are the first to appear after a gap of 66 years, after the inscriptions of Ramchandradeva Yadava in 1300 CE. He is the first ruler to have used Mumbai as his capital and the choice of the island port of Mahim is very obvious, especially when you consider how strategic it was. Its importance is also obvious when we see it through the lens of the 15th-century history of Mahim as an important port where there was much trade with West Asia by the Gujarat Sultans and which was rich and strategically significant enough to be captured by the Portuguese in the second quarter of the 16th century.

The story of Hambirarao, pieced together through a series of inscriptions is important. The first takeaway is that there is still much data out there to be found. Hambirarao’s inscriptions do not just tell us about who ruled here but how he ruled and whom he ruled. One of the most fascinating details emerging from the inscriptional corpus is that he only accepts being a vassal to the Tughlaqs in 1368. In his prior inscriptions, of 1366 and 1367, he proudly claims to be an independent ruler. In his 1369 inscription, he once again appears to have forgotten his vassalage.

This has a very important bearing on understanding the power struggles with the Tughlaq Empire. The inscriptions also raise many questions – for instance, the hitherto accepted date of when the Sultans of Gujarat actually took over this region. We now need to contemplate who he was, what his antecedents were, and whether he left behind any descendants. 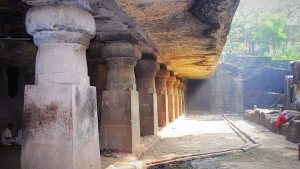 Historians have so far gone along with the date of 1348 CE for the establishment of the rule of the Gujarat Sultans in Mumbai but this is 20 years before Hambirarao. Now this will need to be re-examined.

Mumbai Maharashtra ancient archaeology inscription BARC Hambirarao
You May Also Like
History Daily
Moamoria Rebellion: The Revolution that History Forgot
By Mahasweta Dey
A 30 year civil war, a kind of ‘people’s revolution’, that hollowed out the Ahom kingdom from within
Amazing India
Finding the Indus Valley Civilization
By Anshika Jain
Catch the riveting story of the most significant archaeological finds of the 20th century
History Daily
Anjediva Island: Goa’s Unknown Treasure
By Yash Mishra
Discover the tiny island of Anjediva in Goa that has remained important for the last 2,000 years.
Living History
Emperor Jahangir: The Naturalist
By Anshika Jain
Read all about the wild obsession of a quirky Emperor, with his pets and other animals
Support
Support
Each day, Live History India brings you stories and films that not only chronicle India’s history and heritage for you, but also help create a digital archive of the 'Stories that make India' for future generations.