Garimella Satyanarayana - The Power of Words

A Telugu poet and satyagrahi whose song became an anthem of freedom, Garimella Satyanarayana’s words once inspired millions but are all but erased from our collective consciousness. While we all know the social and political history of the struggle for freedom from British rule in India, what doesn’t get as much attention is the period’s literary history – the poets and writers who wielded the pen to inspire their fellow Indians to free themselves not just from the physical shackles of foreign rule but also the mental shackles it had created. Over 200 years of subjugation had destroyed the will of the people, and poetry and song played a large role in loosening this stranglehold and invoking the spirit of revolt.

The British were well aware of the powerful potential of the spoken word and so wilfully banned books, arrested thousands of writers and poets and seized several printing presses. But the voice of freedom could never be supressed. That is why exploring the poetry and writing of that time is essential for a true understanding of India’s freedom struggle.

By 1919, a younger generation was replacing the moderate voices that had thus far represented the freedom movement. For them, talk of reform was no longer adequate, what mattered to them was a complete transfer of power. Agitations and riots prevailed. The British rulers were virulent; arrests and imprisoning without trials were the order of the day.

Gandhi during the Salt Satyagraha|Wikimedia Commons

Mahatma Gandhi, grasping the new, awakened mood of the Indian masses, decided to launch a new weapon, that of satyagraha, on the twin principles of truth and non-violence. It was the first genuine direct mass-action programme, which involved almost all social classes, including the peasantry.

It is against this historical backdrop that Garimella Satyanarayana, the foremost national poet of Andhra Pradesh, surfaced to voice the defiance of his people against the might of the British government. His rise to prominence coincided with the Non-Cooperation Movement of 1921-22.

Garimella was born into a poor Brahmin family but his place and date of birth are disputed. According to Telugu writer Kameswarrao Tekumalla, he was born in Gonepadu village in Srikakulam district in 1893, while the writer M L Narasimharao’s research points to Priya village in Srikakulam district and his year of birth as 1882. Garimella started singing the folk songs of his land and people during his school days. In 1920, he enrolled for a teacher training course in Rajahmundry, where he became involved in local political activities. His songs took on a new dimension owing to his closeness to freedom fighters.

Garimella used simple language but his message was powerful.

In 1921-1922, there was a two-part publication of his Swarajya Geethamulu (Songs of Freedom). The local police immediately labelled these songs as ‘seditious’ and objectionable and called for the immediate punishment of the poet and publisher. They also prevented the third part from being published.

One song in particular had caught their attention, the one for which Garimella is remembered even today – Maakodi Tella Doratanam (We don’t want this white man’s rule). This historic song containing 162 lines was perhaps the longest song sung in the days of the freedom struggle. It was a concise chargesheet against the British and the political, social and economic conditions under their rules. It was sung not only by freedom fighters but even by children, beggars and at wedding celebrations.

‘Maakodi Tella Doratanam’ gained such popularity that the District Collector of Ganjam, East Godavari and Vizagapatam, G T H Bracken summoned Garimella and asked him to sing the song in his presence. On hearing it, the Collector exclaimed, “Though I do not know the language... I realise now the emotion it will infuse in the natives.” Garimella was immediately arrested and sentenced to a year’s rigorous imprisonment.

The arrest took place on 9th February 1922, and in its 11th February edition, The Hindu newspaper published a letter by Garimella addressed to his countrymen:

“Dear brothers and sisters, I have done my little work and am going to a comparatively long rest. The British bureaucracy has determined to null my pen and my voice for a period of one year. It pleased them to think that I am dangerous to public tranquillity, which means their own existence. If I am really such, as is suspected to be, it certainly caught me too late. I have given out to the country what is best in me. My physical body is to be locked up, but my soul I have left in the country through literature. Let it be gathered, consolidated and worked out, it will work more than my frail body... I feel that I am most hollow now and may God grant that I should return into your midst for the sake of singing the establishment of Swarajya and the glory of your achievements. Yours Affectionately, Garimella Satyanarayana.”

They prey on our lives

And rob our honour’

Thus starts the poem ‘Maakodi Tella Doratanam’, which is 40 stanzas long. Whenever Garimella confronted any social or political problems, a new couplet was spontaneously added. Depicting the poverty and helplessness of the times, he writes:

‘A dozen bumper harvests we reap;

Not a morsel of food we obtain

Salt – to touch it is a crime

And when we touch the salt

Into our mouths mud does he throw;

Alas for food with dogs we fought’

By 1921, Mahatma Gandhi had become the indisputable leader of the freedom movement and, inspired by him, people of all age groups and classes had become ‘satyagrahis’. The British portrayed these people as traitors and ruthlessly harassed them. Garimella describes this in ‘Maakodi’

‘As you enter the school,

Your entry is banned.

A charkha at school is taboo.

He takes your cap off

And beats you up black and blue.

Is a symbol of treachery’

But the satyagrahis remained undeterred. They opened up their chests for the bullets to pierce through.

‘The meditation of your feet

we shall not let go and your kindness

We shall never forget.

We shall prosper, with unity.

When they pounce upon us

With bullets, we will not budge.

We shall sing on and spin on!

Since the government was hell bent on arresting freedom fighters, Garimella urged people to voluntarily court arrest. He exhorted people to fill the jails and be free rather than live like slaves outside.

He was a man who practiced what he preached and soon after he was released, he began publishing and singing again and was promptly sentenced to two more years of rigorous imprisonment.

His wife, father and grandfather died while he was in jail but Garimella continued his struggle, broken but far from vanquished.

The fact that some Indian leaders were slavishly aping Western ways of living and thinking was for him unbearable. Several of his verses expressed this feeling. He warned leaders of the perils of political expediency and compromise.

This was most evident in Garimella’s first work in English, titled Heart of India. In it, he chastises those who display subservience to the British and urges his countrymen to do the same.

He was against both – the Liberals and the Moderates:

For even now your Liberals find

A plea, for a forward view to mind,

For action though they lag behind.’

‘The prince of the Moderates Malviaji

Proposes to build by the end of this thirty

A Swaraj by negotiation and tea

With the masters of our mighty sea.’

Some see a similarity between Garimella and Tagore, who were both poets of freedom of a deeper kind. For them, freedom was as much an internal pursuit as it was external. Garimella too dreamed of living in a state of perpetual amity and freedom beyond all mental and physical boundaries. His dream world was one in which there is:

Love occupies a prominent place in his works. This is why he was so aligned with Mahatma Gandhi’s vision. Garimella was confident that his was the only way to achieve freedom because it was a courageous but loving method of struggle.

A portrait of Garimella|Wikimedia Commons

Unfortunately, once India gained freedom, the country became so focussed on moving forward that it left behind many of the people who had helped create it. This is why one of the greatest political poets of the country, who devoted everything to the freedom movement, died a destitute on 18th December, 1952, just a couple of days after the death of the 'Father of Andhra Pradesh', Sri Potti Sreeramulu, a freedom fighter who was instrumental in creating of a linguistic state for the Telugu people – Andhra Pradesh.

Years later, noted Telugu literary critic Kameswarrao Tekumalla lamented his death as one that was “Unwept, unhonoured and unsung”. 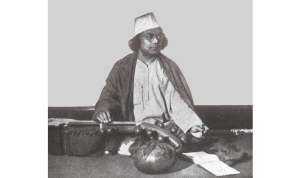 Today, very few remember this great poet, even in his native Srikakulam. A few years ago, students of the training college in Rajahmundry, where Garimella first began his political and poetic career, had submitted a memorandum to the government asking for the college to be renamed ‘Garimella Government Training College’. While that would be a welcome move, our forgotten freedom fighters surely deserve far greater honours.

You May Also Like
Snapshort Histories
Double-Deckers: Twice the Joy
By Kurush Dalal
The much-loved double-decker bus has been a Mumbai icon for more than 80 years. Hop on for a ride down memory lane
History Daily
Nicholas Roerich: India’s Russian Navratna
By Anshika Jain
The Russian-born painter, explorer, philosopher, mystic and ‘jewel of India’, who came here in search of utopia
Cover Story
Nanda Devi’s Nuclear Secret and a Botched CIA Operation
By Ranvijay Singh Hada
Fifty-five years ago, the CIA lost a nuclear-powered spy device on India’s second-highest peak, Nanda Devi
Snapshort Histories
Baobab Tree: A Friend of Archaeologists
By Kurush Dalal
Cursed by the devil but revered by humans, the baobab is called the ‘tree of life’ for the natural bounty it offers
Support
Support
Each day, Live History India brings you stories and films that not only chronicle India’s history and heritage for you, but also help create a digital archive of the 'Stories that make India' for future generations.