June was the month in which the mood of young Indians in cold, dreary London normally appeared to lift a little. Summer came and with it, some amount of cheer. But 1909 was proving to be something of an exception, especially for a bunch of students that in the past few years had been known to frequent India House, a sprawling five-storey mansion in the northern suburb of Highgate. The British Secret Service was familiar with the Cromwell Avenue structure as the rendezvous of firm believers in the theory of armed rebellion against the Raj, and its detectives had been tailing some of the regular visitors dutifully for some time. A handful of these twenty-something Indians, all members of the Free India Society formed in the heart of the Empire in 1907, were immensely perturbed, and not just because they suspected they were being shadowed.

The heat had in any case been on from 1907. The Times of London and the National Review had raised a red flag that year about their headquarters, India House, which they called the Highgate ‘house of mystery’, forcing the property’s owner and patron of its residents, Pandit Shyamji Krishnavarma, and his feisty Parsi aide, Bhikaiji Cama, to shift to Paris to evade action. Krishnavarma had been maintaining the place as a hostel where Indian students could stay and interact with their compatriots elsewhere in the British capital, but his principal Savarkar motive was to put together a young squad dedicated to the cause of freedom. Just when he thought things were finally coming together and more and more Indian students were showing an interest in attending weekend meetings at his address to discuss issues related to their homeland, he had had to pack his bags. After his sudden departure, Savarkar had more than simply kept the band of revolutionaries together as Krishnavarma had kept up the fl ow of funds from Paris. He had solidified contacts with Irish and Turkish nationalists, obtained manuals on the use and procurement of arms and, having added some more members to his clandestine inner circle, the Free India Society, he had emerged as the undisputed leader of India House.

Things at India House would soon take a far more serious turn. Savarkar was not happy with just making speeches and yearned to convert his philosophy into action. He insisted that rhetoric be combined with militant action and chalked out a plan in detail. Broadly, step one was to buy weapons from foreign revolutionaries in exile and ship them off to India. Step two, meant to be simultaneous, was to learn how to make small bombs and open factories in India for their manufacture. Step three involved the cultivation of Indian soldiers in the British-controlled Indian army in order to spark a rebellion within its ranks.

Thus, at one of the Sunday meetings, a chemistry student at London University whom we know only by his last name – Desai – lectured the group on the making of bombs, and Bapat and a Bengali revolutionary, Hemchandra Das (later implicated in the Alipur bomb case of 1909), got hold of a Russian-language manual on bomb-making and had it translated into English. Bapat, Das and Hotilal Varma, yet another Alipur revolutionary, set sail for India with several copies of the manual. After the connections between Abhinav Bharat and Bengal’s revolutionary outfit Anushilan Samiti were laid bare following eighteen-year-old Khudiram Bose’s bomb assault which had killed two Englishwomen in Muzaffarpur and the Maniktala police raid which had led to seizure of bombs from the Calcutta home of Aurobindo Ghose, Bapat succeeded in going underground, but Das and Varma failed to evade the police and were convicted and sentenced. Through his aides, Savarkar sent to India a bunch of Browning automatic pistols, sometimes through French-controlled Pondicherry and Portuguese-ruled Goa, naturally deemed much safer landing points.

Meanwhile, deeply upset by the portrayal of the Rani of Jhansi, Bahadur Shah Zafar and other mutineers of the 1857 uprising as villains in a play on the London theatre circuit, the revolutionaries decided to hold a mass meeting in honour of the ‘martyrs’ on the revolt’s fifty-first anniversary.

Invites were sent out to Indians across Britain, and on 10 May 1908 the main hall of India House was overflowing. Youngsters had turned up from Oxford, Cambridge, Reading and Cirencester. The function began with a rendering of the national song ‘Vande Mataram’ by a group of young girls, and full-throated cries of ‘Vande Mataram’ – this time as a slogan – emanated from the crowd intermittently through the proceedings as speaker after speaker dwelt on the heroism of the fallen rebels. Savarkar’s personal poetic tribute, ‘Oh Martyrs’, circulated among those present, was a smashing success. Some Britishers had at the time launched a fund for their country’s veterans of 1857. The Indians now launched a fund for a memorial for their own heroes. Some students pledged to give up smoking and drinking for a month in order to be able to contribute; others said they would fast on certain days; and still others vowed to stay away from the theatre and other entertainments.

The launch of the martyrs’ memorial fund was followed by a flurry of activity. Two students of the agricultural college in Cirencester – the Sikh Harnam Singh and the Muslim R.M. Khan – quit the institution to protest the principal’s description of the 1857 revolutionaries as ‘murderers’. Both were honoured with silver medals and the title of ‘Yaar-e-Hind’ by a plucky London-based Punjabi woman, Dhan Singh.

But in 1908 Savarkar made a far more significant contribution to the cause of the 1857 revolt which has stood the test of time.

Three months after his arrival in London in 1906 he had completed a Marathi translation of the Italian revolutionary Mazzini’s autobiography; it had sold more than 2000 copies in India as it had flown under the radar of government censors, and Savarkar’s preface, despite its implied meanings, had passed muster. After that he had been busy pounding the streets of London for more than a year and mining records at the India Office Library for material on the revolt. The result was the very first account of the uprising from an Indian point of view. The title of the book, written in Marathi and later translated into English (by W.V. Phadke and V.V.S. Aiyar) and into French (by Cama and M.P.T. Acharya), was The First Indian War of Independence. In it Savarkar vigorously contested the colonial theory of a mere ‘sepoy’ rebellion and hailed the uprising as an outstanding example of Hindu–Muslim unity. He cited mainly English sources to corroborate his arguments. In 1909 Scotland Yard obtained the still-unpublished first chapter through a mole – a Maratha by the name of Kirtikar – whom it had planted inside India House.

Kirtikar’s first name remains unknown, but what we do know is that he was about thirty years old and had earlier worked as a translator in the Bombay High Court. He was recruited as a spy and given a year’s leave to be in London, where he was told to take up lodgings at India House. He met Savarkar there without any letter of introduction and told him in their common language, Marathi, that he was from an aristocratic Maratha family. He was going to study dental surgery, he claimed. Savarkar accepted him as a lodger at India House without reservation, and Kirtikar even took admission to a dentistry course at a London institute. He would go out every morning and return late in the evening. That he was a spy was later discovered by Savarkar’s comrades Aiyar and Rajan. But by then Kirtikar had done much damage.

Scotland Yard also got to know, perhaps from Kirtikar again, that a copy of Savarkar’s yet-unpublished book had gone out to his brother Babarao in Nasik. The text was, in July 1909, immediately proscribed in India under the Customs Act, earning the distinction of becoming one of the earliest twentieth-century books to be banned even before it was published. Savarkar protested vehemently that pre-publication proscription, legal or not, was indubitably unfair.

There was no ban on the text in Britain itself – the colonizers had one set of rules for the homeland and another for a colony. This is what made London such an ideal ground for the revolutionaries. While the civil liberties of Indians could be short-circuited by the British anywhere, it was harder to do that in London.

But no printer in London would touch the manuscript. Attempts to print the book in France and Germany also failed, but the owner of a press in Holland finally agreed in the second half of 1909, and some copies were smuggled into India, allowed in at the ports because they came bearing beautiful dust-jackets of Charles Dickens’s Oliver Twist, David Copperfield and Great Expectations.

Quite a few reviewers of the time criticized Savarkar’s ornamental style of writing, and those loyal to the crown in particular had a problem with its content. London’s Times felt that the book was ‘in its way a very remarkable history of the Mutiny, combining considerable research with the grossest perversions of facts and great literary power with the intensest bitterness’. Yet the book profoundly stirred Indian emotions. Those inclined towards revolution were evidently impressed, but so too were those like Jawaharlal Nehru, at the time pursuing his education in Britain and warned by his father, Motilal, not to involve himself in political activities. A student of Trinity College in Cambridge, Nehru never set foot inside India House but described Savarkar’s account of 1857 as ‘a brilliant book though it suffers from proxility and want of balance occasionally’. Well after his return to India and plunge into the freedom struggle, Nehru wrote,

‘I have often felt that a new edition [of Savarkar’s book], more concise and with many of the oratorical flights left out, would be an ideal corrective to the British propaganda about the events of 1857.’ 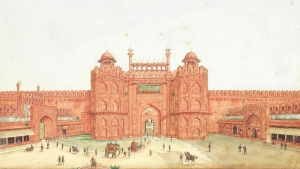 Excerpted with permission from ‘ Savarkar - The True Story of the Father of Hindutva’ by Vaibhav Purandare, Juggernaut Books

British Freedom Struggle freedom fighter Independence Movement Revolt of 1857 The Indian War on Independence V.D. Savarkar Jawaharlal Nehru India House revolutionary
You May Also Like
History Daily
Moamoria Rebellion: The Revolution that History Forgot
By Mahasweta Dey
A 30 year civil war, a kind of ‘people’s revolution’, that hollowed out the Ahom kingdom from within
Amazing India
Finding the Indus Valley Civilization
By Anshika Jain
Catch the riveting story of the most significant archaeological finds of the 20th century
History Daily
Anjediva Island: Goa’s Unknown Treasure
By Yash Mishra
Discover the tiny island of Anjediva in Goa that has remained important for the last 2,000 years.
Living History
Emperor Jahangir: The Naturalist
By Anshika Jain
Read all about the wild obsession of a quirky Emperor, with his pets and other animals
Support
Support
Each day, Live History India brings you stories and films that not only chronicle India’s history and heritage for you, but also help create a digital archive of the 'Stories that make India' for future generations.