The Wonder Well of Red Fort

It may be hard to imagine today but there were once over 100 baolis or stepwells scattered across the nation’s capital. Few have survived the test of time but it may surprise some to know that the most well-kept of the remaining baolis is the one within the historic Red Fort Complex and is 300 years older than the monument itself. Read on to find out what secrets are hidden within its deep recesses.

On 12 May 1639, the foundation of Qila-i-Mu’alla (now known as Red Fort) was laid. The area marked for the imperial palace of the mighty Mughals was on the land that was once a part of Feroz Shah Tughlaq’s city Ferozabad. The city was no longer in its original shape. But one important structure, almost 300 years older than the foundation day, was kept intact in the plan of this palace. This structure was the baoli that we now know as the Red Fort Baoli, arguably the most well-kept of all baolis in Delhi. While few historians question the association of Tughlaq with this baoli, there are several others who prove the claim.

Dr Narayani Gupta and Ratish Nanda, in their listing of Delhi’s monuments in the book Delhi, The Built Heritage (1999), have categorized it as a Tughlaq-period baoli. Maulvi Zafar Hasan, in his record (Monuments of Delhi: Lasting Splendour of the Great Mughals and the Others), mentions it as ‘late Afghan’, but also places a question mark next to it, indicating his doubt over the assumption. Surprisingly, this baoli finds very little mention in other historic documents of British or Mughal era, despite being a prominent structure at a prominent location. Bashir-ud-Din Ahmad, in his work Waqiaat-e-Darul Hukumat Delhi, notes that the baoli in Red Fort has stairs leading to the tank from the two sides, but is covered, and the water is used to irrigate the gardens of the Red Fort. However, he makes no mention of the origin or construction of this baoli. Looking at the fine work of this baoli, one can debate that it was not constructed during the Tughlaq period. It appears to be built during Lodhi or Mughal era. However, such a statement is hypothetic in the absence of any definitive records present. There is also a possibility of a structure which might have been built over or repaired with better masonry later.

As you enter from the Lahori Gate of the Red Fort and cross Chhatta Chowk, you reach an open compound, which further leads to Naubat Khana. From this compound, if you turn left (instead of proceeding towards Naubat Khana), the road takes you to the baoli, crossing a few British barracks. This road was once arcaded and had another gate at the end, outside which the baoli is situated. The arcades, gate, and all other buildings were destroyed by the British after the events of 1857. Later, barracks were constructed, and a parade ground was built in the cleared area.

This baoli qualifies as a unique architectural experiment, as it has two flights of stairs—from the west and from the north—connecting the water basin mirrored at ninety degrees. It is a rare L-shape, which strengthens our belief about this structure being a Tughlaq-era construction, as, during Feroz Shah’s reign, several architectural experiments were carried out.

It is rather amusing to learn that people in those days built a baoli for the public, hardly hundred metres away from the Yamuna. There is a possibility that the medieval people found some minerals in Yamuna that were/are unsafe for daily consumption, or simply the brackish nature of Yamuna prevented them from using the water regularly. May be, that was why they relied more on the water of the wells and baolis, where it got filtered by sand.

When the British army converted this fort into its permanent cantonment, they covered this baoli with iron girders, leaving only the first level accessible.

Pipes were pushed into the well and water was pumped out using motors. Later, on 6 July 1945, Gurbaksh Singh Dhillon, Shah Nawaz Khan, and Prem Kumar Sahgal, the three brave commanders of Netaji Subhas Chandra Bose’s Indian National Army, were brought to the Red Fort. This baoli served as a jail for them. Arches were sealed with brick walls. Small guarded doors and windows were built, confining these special prisoners. A makeshift toilet was also made inside these dark cells. Later, the trio was tried in the Salimgarh Fort, situated behind Red Fort. These covered arches and windows with bars still exist there.

After 1947, the Indian Army continued to occupy the Red Fort and the baoli was forgotten. Vegetation grew over it, and it was nothing more than a garbage dumping ground. In 2002, the army handed over this fort to the ASI, who was preparing it to be the next World Heritage Site. The ASI started desilting and removing the encroachments, which took several months. The original plan of the ASI was to convert this baoli into a memorial for the army, but given the sensitive structure and threat of snakes all around, the idea was never executed. Instead, a nice museum was put up in Salimgarh, a stone’s throw away from this baoli. The iron girders that were removed are kept in one corner of the baoli. Few more buildings built by the army right on the edge of the baoli were removed during the restoration in 2018–19.

In 2012, the water pockets around the well were much higher than the level of water in it. One could hence hear spouts of water falling in from a height into the baoli. The scenario changed in 2016 when, during the construction of Delhi Metro’s Heritage Line, the workers accidentally punctured the underground water channel. This resulted in draining of the underground waterway, and it dried up the baoli.

Another interesting element in this baoli is that the octagonal shaft of the well has a small walled structure on top of it. This structure used to hold the Persian Wheel with which people used to pull water out of this baoli. Towards the southern and eastern sides, the wall has tiny arcaded rooms. On the southern side, we have a small temple functioning, while on the eastern side, there is a grave. There is absolutely no documentation of their origin or even existence. It appears to be from the times of the Indian Army and is currently maintained by the local staff. 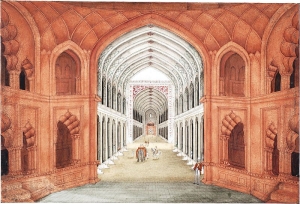 Glimpses of a Lost Delhi